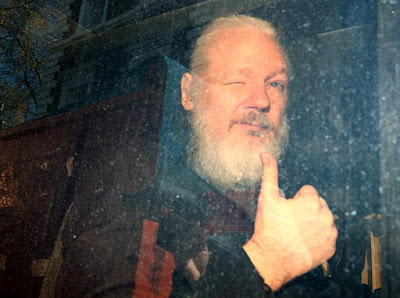 British police have arrested Julian Assange after Ecuador withdrew his asylum status on 11 April, 2019!When he was arres, Assange could be seen holding a copy of Gore Vidal’s History of the National Security State, a book about the rise of the modern military-industrial-security complex and the so-called “Imperial Presidency” in what was an apparent critique of the US government.

The arrest was made at the Ecuadorian embassy in London, where the WikiLeaks founder has been claiming asylum since 2012. Assange was carried out of the embassy by authorities, and taken into custody at a central London police station. Assange could be heard pleading that “the UK must resist... this attempt by the Trump administration.”

Police later confirmed that Assange was “further arrested” on behalf of US authorities under an extradition warrant. “He is accused in the United States of America of computer related offences” a spokesperson for the Home Office said. The US indictment, published this morning, lists a single count of conspiracy to commit computer intrusion. An extradition hearing will take place at Westminster Magistrates’ Court.he has been accused of aiding Russian interference in the 2016 US presidential election by publishing over 19,000 emails stolen from the Clinton campaign and the Democratic National Committee.

Assange and The United States, both, have the same Mercury, at 24º Cancer!

I found very interesting that Julian Assange and USA have (both) Mercury (informations) at 24º Cancer! Moreover, USA's Mercury is retrograde (secret informations) and it rules but US 8th house (wars...).

Pluto already approaches into opposition with 24º Cancer degree, but the exact opposition for Julian will be on 22 Feb 2020 (later, on May/June 2020 in its retro motion, and agin during December 2020, as direct)! The difference between Assange's Mercury and USA's Mercury is that he has Mercury sextile Pluto in his natal chart, and on the other side, USA has RMercury opposition Pluto, so transit of Pluto to USA Mercury might bring very painful time to USA regarding its secret infromation, as well as it will bring more attack on Assange, but as outcome it brings more power for him, 'cause, as I've said-he has in his natal Mercury Pluto sextile. He has in his "pocket" more powerful information! In the moment of exact Pluto opposition to his natal Mercury (20th Feb 2020) transit Moon will be at 21º Aquarius, making conjunction with his natal Mars (ruler of his intercepted (secret) Scorpio in his 12th-support from back, but secret enemies too..). Btw, I mapped axis 21º Aquarius/21º Leo as axis of France (21º Aquarius)/The Great Britain (21º Leo). However, Assange might put in public more powerful ("dangerous") information, which could bring him more power, but which might harm to USA more ('cause USA has in its chart Mercury/Pluto oppositon, so transit of Pluto to USA Mercury brings problems to this country).

When he got asylum from the embassy of Ecuador in London on 16th August 2012, transit Saturn was on 24º Libra ( Putin's Mercury (information) is very close, at 23º Libra, in his 12th-secrets), squaring his natal Mercury 24º Cancer, and tranist Mars was 25º Libra, squaring the same Mercury. In his natal chart, Julian has Mercury inconjunction Mars, and this is the image of dealing with police, specially if we take the fact Mars comes from his intercepted Scorpio in 12th... It would be interesting to follow 24th January 2020 when Saturn at 24º Capricorn is going to make oppositon to his Mercury-it will be  the new important moment in his life, when he might make some very serious decision and when he could deal with justice and some new possible arresting just before Pluto hits his Mercury in February 2020 (which I've mentioned above). 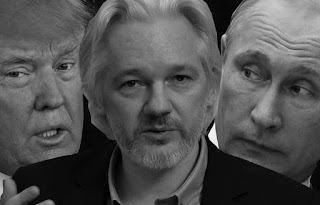 US President, Donald Trump, today commented Assange's arresting on this way- " it is not my bussines..." If you remember, during presidental election 2016, he spoke well about WikiLeaks, supporting they put in the air Hilary Clinton's emails. Donald's midpoint of Venus/Saturn is at 24º Cancer, Venus rules his MC, as well as Saturn rules his 7th, which is 10th from his MC (he as president) , so it speaks about his reputation for sure.

On 29th March 2020, transit Jupiter is going to make exact opposition to his natal Mercury too (in June 2020 in its retro motion one more time, and the last time in November 2020)! As he has in his natal chart Mercury/Jupiter trine, this oppositon could work for him in a possitive way. Jupiter is in his natal 12th (support  behind his back, as well as secret enemies...), as essential symbol for law... He has both Jupiter and Neptune in his 12th, which is very powerful, bringing him in connection with secret services and secret generally. But also I would say someone very powerful protects him, from his shadow... 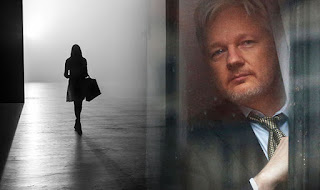 On 16th May 2020 he is going to have transit Uranus in opposition to his natal Moon 7º  Scorpio in 12th, which might be some turning point too. Also, some woman from his "shadow" might play the main role in his life... In his draconic chart (which is the lunar one) there is the Moon at 22º Sagittarius, exactly over Trump's Moon, and across his natal Sun 22º Gemini (where Russia  has in its chart the Sun - president) in Gemini. Interesting, I have found axis 22º Gemini/22º Sagittarius as axis of White House and that helped me when I've predicted Trump's winning in 2016! So, Julian's soul has strong memory from his past incarnation regarding secret informations which come from White House, Washington D.C. His natal Moon is now in 12th, as I said already, so I would not be surprised that some "secret woman" from White House might be involved in all this case...

The upcoming summer eclipses, both, will "hit" Assange's chart-on 2nd July we have eclipse on 10º Cancer, at his natal Sun, which is in square with his natal Uranus 9º Libra. This might bring him big change, if we take the fact Uranus is now in Taurus and it is going to make sextile during 2020 with his Sun, so the change might be good for him, even some kind of freedom migth be on his way... The other eclipse is on 16th July 2019, at 24º Cancer, conj. his natal Mercury (as well as USA's Mercury), so I would say more information (he has kept) might find their way to be in public. That might bring him more power, cause in his case, Pluto's transit works for him, and at the same time it might harm to US's secret informations. I take for US chart Asc 8º Scorpio, and Assange has the Moon at 7º Scorpio. Mercury in USA chart rules by its 8th (wars), so maybe new secret infromation regarding US army will be out...

However, The United States must produce its case for requesting the extradition of Julian Assange from Britain by 12th June 2019,  a British judge hearing the WikiLeaks founder’s case said...Assange appeared in a London court after being removed from the Ecuadorean embassy and arrested for breaking bail conditions nearly seven years ago.

He was also arrested in relation to an extradition warrant on behalf of the United States which accuses him of involvement in one of the biggest ever leaks of classified information.

On 1st August 2019, Mercury (information) is going to turn direct at 23º Cancer 57' (24º Cancer) "moving" Assange's Mercury, as well as the United States' Mercury! Big moment for both, regarding secret informations! More to come...

He is the one who has the "key" 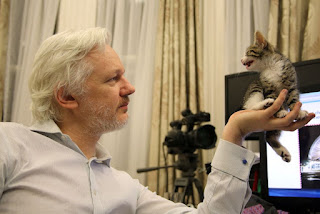 Recently, South Node was crossing over his natal  Mercury, and South Node always speaks about our lesson, here we learn how to digest good, to accept bad... The dispositor of his natal Mercury, the Moon in Scorpio, brings his mind (Mercury) within the sign of Scorpio (where the most powerful secret lives, as well as very dangerous secret lives), in square with his natal axis of lunar nodes over Aquarius/Leo. In other word, if we speak from the point of view of mythology, Assange is living one part of myth about the goddess Hecate (In astrological sense Hecate is: Moon in Scorpio, or in 8th house, in aspect with Pluto, and in aspect with lunar nodes). She is is a goddess in ancient Greek religion and mythology, most often shown holding a pair of torches or a key and in later periods depicted in triple form. She was variously associated with crossroads, entrance-ways, light,  but also with magic, witchcraft, knowledge of herbs and poisonous plants, ghosts, necromancy, and sorcery. It seams he is the one who has the "key"?!You can read my article on Hecate .here Interesting is that when he was born, asteroid Hecate in his chart was at 22º Sagittarius, where is his draconic Moon (the soul's memory from his past incaranation), and where is Trump's natal Moon, just across Trump's natal Sun 22º Gemini, which is, as I 've said above, the axis for entering in the White House! So, as Jupiter has its journey within the sign of Sagittarius, it already had its crossing over Julian's draco Moon (and his Hecate) during March 2019, but it is going to repeat one more time, as Jupiter just turned retrograde (10th April 2019) during May 2019, and one more time later, in direct motion, in late October 2019. Jupiter always brings "too much over our back" and puts in front of us legal issues, affairs too. As over 22º Sagittarus/22º Gemini the White House "vibes", I would say that the United States might be too much over Assange's back, with "legal preassure". But, do not forget, he is the one who has the "key"! Aslo, as the Moon always speaks about some female figure, and I 've already mentioned some woman from his "shadow", so, may be even his lawyer, Jennifer Robinson (woman) will be the one with the "key"... 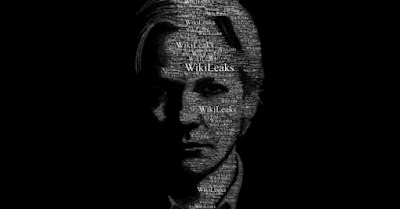 The Sabian symbol for 24º Cancer (read the meaing for 25º Cancer in the book of Sabian Symbols) is:

A dark shadow or mantle thrown suddenly over the right shoulder - More power for Julian? We will see...

Inspiration: After inner contemplation, a man stands forth boldly in the full light of the Sun.

Seven years without the sun light..., living in the embassy of Ecuador in London...,  this might be so big sign that he is going to feel again the sun light over his skin in a time ahead, when Pluto starts to "open" his Mercury...

To throw suddenly over the right shoulder is an act of this is my choice, this is who I am, what I stand for.
Three lives in one

Also, I would say, from the spiritual point of view, there is strong Julian's need for all what he is doing, collecting secret informations is something which he has been started to do in past life, which he will do in his next life too, the present time does not exist, now he lives his past and at the same time he makes his future...And, one is sure, he is deep in that, and very brave... Mercury/Uranus/Pluto combination, plus 8th house involved-he is the one who takes a risk, and visits Hades' world in order to get dangerous information, but at the same time, in order to present the truth! Where is the truth-there is something dangerous too...

You can always book your personal reading with Smiljana here: Book Your Reading