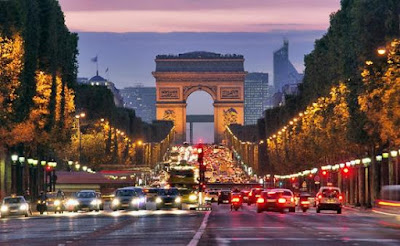 Although traditionally related to the sign of Leo, from the point of view of horoscope mapping France (and its capital Paris, as well) is also „sensitive“ at 21° Aquarius, the degree of Neptune’s exaltation. The city known by the famous Coco Chanel, perfumes, high fashion – shortly, the city of love! All that agrees with the Neptune symbolism (magic), because the Venus (perfume, fashion, love) is exalted in Neptune’s sign, the sign of Pisces. The second colonial force (Neptune as the symbol of the faraway lands) in the world, right after the Great Britain, is situated right across 21° Leo (the degree I related to the United Kingdom – see my article Great Britain and 21° Leo ). If we take a look at these two countries on the axis 21° Leo/21° Aquarius, then the whole story about the Hundred Years’ War becomes much more understandable.

It is interesting that the first President of the French Fifth Republic Charles De Gaulle vetoed United Kingdom’s membership in EEC in 1963, on the first of the two occasions. This happened right after the Lunar eclipse on August 15, 1962 at 22° Aquarius 30’, so the eclipse activated the axis 21° Leo (UK) / 21° Aquarius (France). After this eclipse, in 1965, France launches its first satellite (Neptune) into orbit, becoming the third country that did that, after USSR and USA. 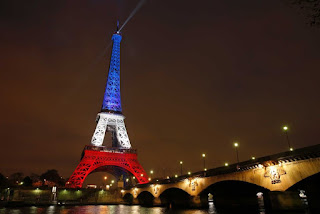 Today, the first thing we think of when we think of Paris is Eiffel Tower, named after its creator - Gustave Eiffel (December 15, 1832, 08:00a.m., Dijon, France, Asc at 11º Leo). When we progress his chart for the moment when Eiffel Tower was officially presented to the world (March 31, 1889), we can see that his progressive Sun (the ruler of his Asc) was at 21º Aquarius! In the horoscope of the First French Republic the ruler of the Ascendant - Pluto (the capital) is at 21º Aquarius! Ascendant in mundane astrology always represents the capital and general situation in the nation. 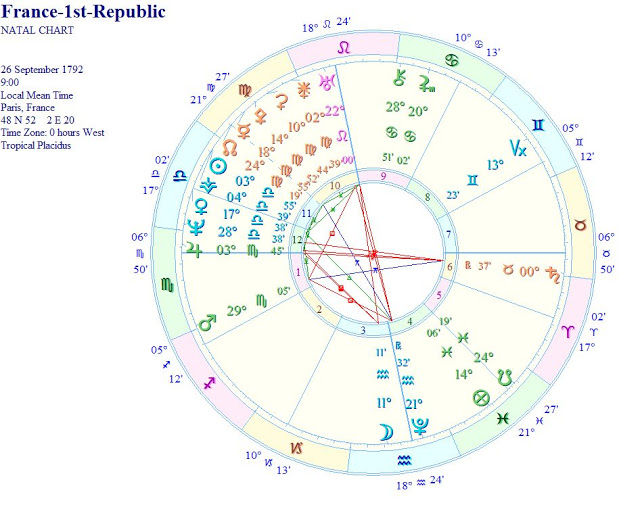 During WWII the operation started on June 6, 1944 by landing on the beaches (Neptune) of Normandy (operation “Neptune” or better known as D Day). Solar Arc Mercury of French First Republic was at 21º Aquarius – degree of Neptune’s exaltation! Mercury rules the 8th house in the horoscope of the French First Republic and it symbolises disputes and wars. Everything happened after the Lunar eclipse on May 14, 1938 at 22º  Scorpio 54', which squares 21º Aquarius, the degree I relate to France.

Presidents of the Fifth French Republic 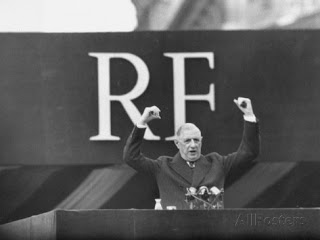 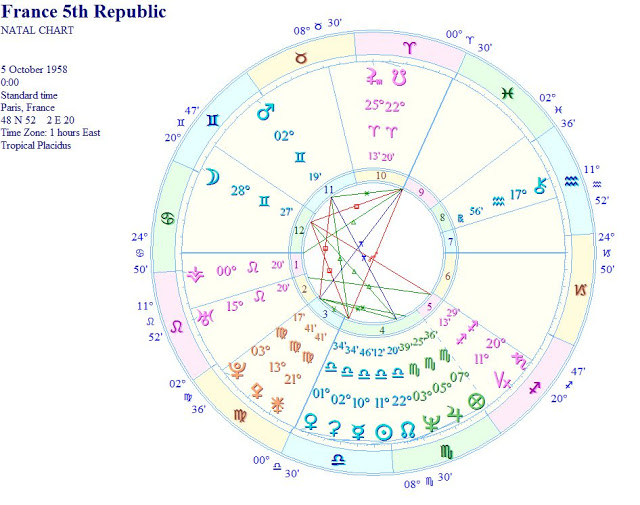 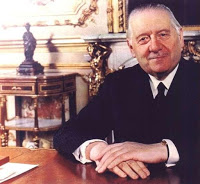 According to the Constitution, Alain Poher was in charge of state affairs in the absence of the President. He was acting President twice - once after De Gaulle’s resignation in 1969, and the second time on April 28, 1974, after the sudden death of  Georges Pompidou. It is interesting that he has MC at 22° Aquarius 37', close to 21° Aquarius! 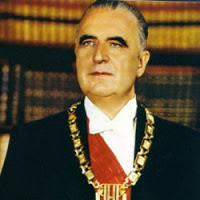 The most famous close associate of De Gaulle, Georges Pompidou, became the President of Fifth French Republic on June 20, 1969. In his horoscope, he has the Asc/Desc axis across 20º  Leo 25'/20º Aquarius 25'. During his mandate he stood for Euro-integrations. Unfortunately, the death prevented him from serving the whole mandate. All those events followed two eclipses: on August 15, 1962 (Lunar at 22º Aquarius 30') and on February 10, 1971 (Lunar at 20º Leo 55').

Valéry Giscard d'Estaing became the President of the French Fifth Republic on May 25, 1974. He has the ruler of the Ascendant, retrograde Venus, at 20º Aquarius 59', almost at 21° Aquarius! He served the full mandate, 7 years, and was succeeded by the famous socialist François Mitterrand, the man who was the longest-serving President – 14 years, two full mandates.

When Mitterrand became President, on May 21, 1981 his secondary Ascendant was at 20º Scorpio 44' and in square with 21º Aquarius, which might imply that the country will have problems (square) with this man. At the same time, Solar Arc Moon of the French First Republic was at 20º Leo 57', also activating 21º Aquarius. Mitterrand will be remembered for government cohabitation with Jacques Chirac, and for rising inflation. During his rule there were three eclipses that affected France. The first was on November 12, 1985, Solar, at 20º Scorpio 09', almost at the degree of his secondary Asc at the time he became President. On February 9, 1990 followed the Lunar eclipse at 20º Leo 47'. And lastly, on November 13, 1993, Solar eclipse at 21º Scorpio. After this last eclipse the rule of this man was ended – on May 17, 1995 France got the new President - Jacques Chirac. During Mitterrand’s rule and after the mentioned eclipse on November 12, 1985 -  in September 1986, there was the bombing of the "Tati" store in Paris. Seven people were killed and 55 injured. Four years earlier, in an anti-Semite attack in front of the restaurant Goldenberg six people were killed and 22 wounded. 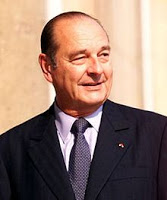 Jacques Chirac has Asc at 20º Aquarius 46', bringing him in a strong relation with France, since I mapped it at 21° Aquarius. He ruled from 1995 to 2007. During his mandate, there were attacks on trains: in 1995 at Saint Michel station, when eight people were killed and 117 injured, and in 1996 at Port Royal station when eight were killed and 91 wounded. When Chirac became President secondary axis Asc/Desc of the French Fifth Republic was across 21º Leo/21º Aquarius! His rule was preceded by the mentioned Solar eclipse at 21º Scorpio, on November 13, 1993, making the square (the problem) with 21º Aquarius (Paris, France). 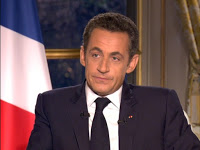 Chirac was succeeded by Nicolas Sarkozy. Sarkozy has Saturn at 20º Scorpio 20', in square with 21º Aquarius, so French fate was not an easy one with him as well. When he entered upon office, on May 16, 2007, the tertiary Moon of the French First Republic (zooms in at the events of two days, for it moves about 1º in 2 days) was at 22º Aquarius 01', just finished crossing 21º Aquarius. During his rule, on February 9, 2009 there was Lunar eclipse at 21º Leo 00', which again “called out” France. In March 2012, terrorist Mohamed Merah organized attacks in Toulouse and Montauban, when seven people were killed, including three children. 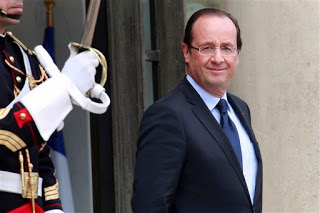 After this eclipse, France got its present President François Hollande. He assumed the presidency on May 15, 2012.

I will never forget the Solar eclipse on December  13, 2012 at 21º Scorpio 56'! Probably because it happened right at my Ascendant. But, since I am mundane astrologist and pay attention to everyday news, the first news I caught after the eclipse was – Doctors’ strike in Paris!  This eclipse was in proximity of the fixed star Unukalhai (in Serpens constellation) that is related to doctors. It was total eclipse of the Sun that lasted 4 minutes and 2 seconds, meaning that the influence of this star would be lasting for more than 4 years, at least until the end of 2016. (On the personal level, eclipses have effects until the next eclipse of the same type, on the mundane level, the effects last much longer, even years. Since Ptolemy time there is the rule that the effect of the eclipse on the state would last as many years as the number of minutes or hours the eclipse lasted. The longest-lasting Solar eclipse was 8 minutes, and Lunar 2 hours, but the phenomenon of approach and separation in the Lunar eclipse may last for 4-5 hours, even more.)

After the strike, on January 11, 2013, the French President sent troops to Mali, the former French colony, and France became involved in the war. The position of Solar Arc Moon of the French Fifth Republic in the moment when the war begun in Mali – February 16, 2012 – is very interesting. It was 21º Leo 48'!

Terrorist attack on “Charlie Hebdo” offices in January 2015 took 17 lives. Secondary Moon of French Fifth Republic was at 21º Cancer, in quincunx (the aspect of death, danger) with 21º Aquarius, so this is depiction of the danger for French people (Moon).

And in the end, the French "Le Monde" published that terrorist attack on Paris on November 13, 2015 was the most deadly event on French soil since the end of WWII. Interestingly, everything happened when the transit Sun (life) was at 21º  Scorpio, in square with 21º Aquarius (Paris). It is very obvious that France is still under the influence of the Solar eclipse that happened on November 13, 2012 at 21° Scorpio, and that the influence would last at least until the end of 2016. If I also add that on September 13, 2015 there was the Solar eclipse at 20° Virgo 10', then it may be said that this eclipse, forming the quincunx (the aspect of death, danger) affected 21° Aquarius (Paris).

On February 11, 2017 there will be Lunar eclipse at 22º  Leo 28', so France might end up involved in some events again. French Presidential elections will be held that same year, because the presidential mandate lasts for 5 years, and Holland rules since 2012.

Since Neptune is the higher octave of the Venus, the solution here is in the prayer filled with love… 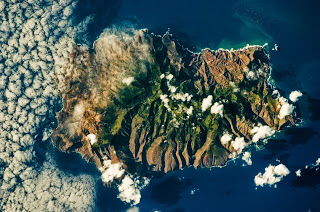 France is also famous for its Civil Code from 1804, created by Napoleon. This code guaranties the basic rights and freedoms of the citizens, very well fitting into depiction of exalted Neptune (ideal), and this code had become the part of the civil law in many European countries that exercise the continental law. It is interesting that the Solar Arc Moon of the French First Republic was at 22° Aquarius on the day Civil Code entered into force (March 21, 1804), meaning it was crossing 21° Aquarius while the code was being created…