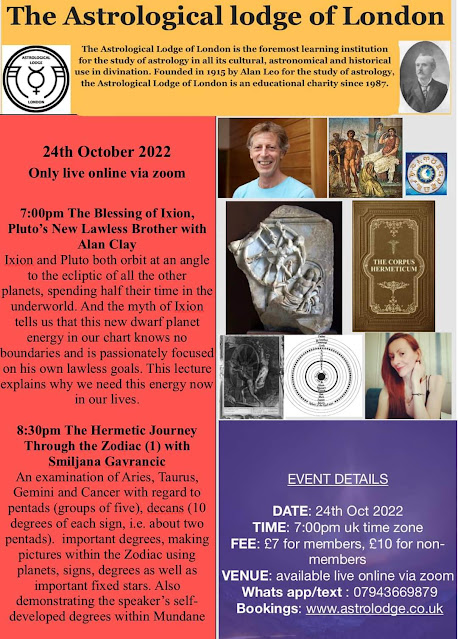 It is a very special time, as it is the season of eclipses (25th October 2022 solar eclipse at 2 degrees of Scorpio, and 8th November 2022 lunar eclipse at 16 degrees of Taurus).

I was giving my talks in the Lodge in September 2016 on Uranus In Taurus, and in March 2021 on Miasams in Homeopathy From The Point Of View Of Astrology

Looking forward to meet you again!

Book your place for Part 2 here

Book your place for Part 3 here

Venus/Sun Superior Conjunction On 22 October 2022 At The Very End Of Libra- Tulsi Gabbard As Symbol Of Transition The 2nd Episode Of 6th January 2021 - Trump's Supporters Attack At The Capitol Building Washington D.C.

Venus/Sun Superior Conjunction On 22 October 2022 At The Very End Of Libra- Tulsi Gabbard As Symbol Of Transition Within The 'Combusta Way''The 2nd Episode Of 6th January 2021 - Trump's Supporters Attack At The Capitol Building Washington D.C.

The Moon's placement is going to be at 27 14' Virgo (Venus' fall degree), just opposite 27 Pisces (Venus exaltation degree)

I link Troy, Trojan War with 27 Pisces (you can read my article on that topic here: The Helen Of Troy)

When Jupiter and Saturn made so called great conjunction in December 2020, at 0 Aquarius, transit Moon was at 27 Pisces

On 6th January 2021 (Trump's Supportes Attack on the Capitol Building Washington D.C) transit Mars was at 29 Aries, just opposite the upcoming Venus/Sun superior conjunction at 29 Libra on 22 October 2022

And finally, Asteroid Aphrodite was discovered at 29 50' Aries. She was the one who puts Helene of Sparta into the hands of  Paris (the Prince of Troy) and that's how the Trojan War has been started. In the moment of solar eclipse at 29 Aries, on 20th April 2023, secondary progressed Moon of the chart of disccovering Aphrodite will be at 29 Libra, where we are having on 22 October 2022 superior conjunction of Venus and Sun

I would also watch over the chart of Persian Empire (i.e.today's Iran), as I've mapped this country at 29 Libra/0 Scorpio, and Solar Arc Moon of the US just left 29 59 ' Libra and entered 0 00' Scorpio. Somehow, some kind of conflict between the US and Iran - may be possible.

Also, some civil war in the US is again in the air. If we take the fact that the midterm elections are coming, and they are happening on the lunar eclipse day, and that Republicans are going to take back seats - civil war is more then possible. Specially, if I tell you that lunar eclipse on 8th November 2022 (the day of midterm election) at16 Taurus is in conjunction with the asteroid Helen at 17 Taurus, where Uranus (revolution by itself) is placed too.

In the mean time, one brave woman, Tussli Gabbard, just left Democracy Party of the US...In the horoscope of Democratic party US, we can see Venus at 0 Taurus (just crossed over 29 Aries)

The Memory Of Trojan War

Which  Planet At Which Degree Would Be An Image Of The Most Beautiful Woman In The World (Helen Of Troy)?

What Mythology Says On 27º Pisces?