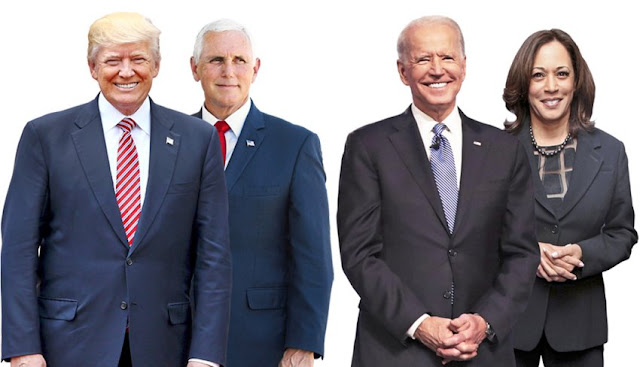 On 3rd November 2020, there will be the US Presidential Election. In September 2019 I wrote an article for my blog on Kamala Harris ’FOR THE PEOPLE’ where I ’ve predicted she might be involved into the upcoming US Presidential Election. Later, she gave up from the presidential race. But, in mid August 2020, Joe Biden choosed Kamala as his running mate. In case Joe Biden wins, she will become the first woman Vice President,  and the first African-American and the first Asian-American Vice President.

Since Trump won in November 2016 (here you can read my article from Sept 2015 where I predicted Trump's winning - 22 degrees of Gemini and White House), I was writing how the US Presidential Election 2020 will bring female energy (read here my article: The US Election 2020 brings female energy), and how change is going to happen, as the upcoming election will occur with secondary progressed Moon of the US at the very end of the sign of Capricorn (29º), crossing over secondary progressed Pluto of the US, and preparing to reach 0º  Aquarius. This is all is such a big sign that there will be some change, and that women, female energy, will have the main role on 3rd November 2020, leading the US into totally new time, as on 21st Dec 2020 at 0º  Aquarius there will be the great Jupiter/Saturn conjunction.

On 4th February in my article ’The US Election 2020 brings female energy’ I wrote this: Transition from 29° Capricorn to 0° Aquarius -I find that transition from 29° Capricorn to 0° Aquarius interesting, for I see a depiction of woman there (Moon) who might have a dark skin (Saturn as the ruler of the Capricorn), a wisdom collected within (29º Capricorn contains the synthesis of all degrees within the sign) and who leads America towards completely new age (0º Aquarius). In other words, I would say that the next President of USA may certainly be of dark color (African American), since it is the sign of Capricorn.

What works for Biden and Kamala? 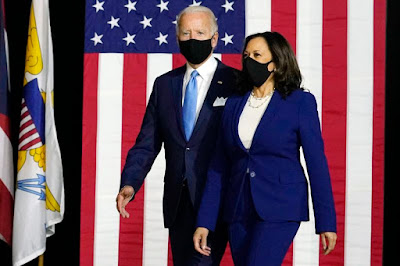 Biden’s secondary progressed MC (his reputation, status), as well as his Solar Arc MC (his reputation, status) is at 9 º Sagittairus, ’moving’ his natal Saturn at 9 º Gemini  57’ from his angular 7th house. This is very important for Biden, and could mean he will have to take some kind of responsibility over the US nation. Have on mind that at 8 º Gemini there will be the lunar eclipse on 30th November 2020, after the US Election, and that at 8 º Gemini there is Uranus of the US. Uranus in the US chart carries within itself the Moon from Aquarius, and the Moon represents the US people, voters.

-          Biden’s seconadry progressed Mercury (ruler of his natal MC-he as President, his status, reputation) is crossing over 24 º Capricorn 58’, making an opposition with his natal Jupiter at 25 º Cancer 08’ (Jupiter is ruler of his Asc, represents him). In natal chart he has Mercury trine Jupiter, so this oppositon in secondary progressions – works for him well. Transit Saturn at 26 º Capricorn is joing here too, ’pushing’ things, helping him. His natal Saturn is in Gemini, which means that his natal Mercury 21 º Scorpio is dispositor of Biden’s Saturn, and makes trine with his natal Jupiter.

-          Biden’s Solar Return whih starts on 19 November 2020 has Asc at 11 º Scorpio (where will be the transit Sun on election day, on 3rd November 2020), together with Mercury there and Mercury is his natal ruler of MC, but this all sits in his natal 12th house, and activates his ’hiden agenda part of life’, but this also could be some kind of help from ’his shadow’, which we need in politial life. Solar Return Sun in Biden’s chart is in his 1st house, which may be a good sign (later I speak on Trump’s Solar Return Sun in his 12th house – which is not so nice sign).

And finally, Biden's tertiary Moon (it crossed 1 º per two days-is crossing over 22º-23º of Gemini during election day! That is a ticket for entering in the White House (regarding my mundane work, which helped me in Sept 2015 to predict Trump's winning one year before it was happened).

-          Kamala Harris has her secondary progressed Sun at 24 º Sagittairus 18’, exactly at her natal Desc (angular house), and at the same time ’moving’ her natal Asc º 24 Gemini. We must add that Kamala’s secondary progressed Fortuna on 3rd November 2020 is at 24 º Sagittairus too.Fortuna (Asc-Sun-Moon) is the most important spot within our chart, as it moves very fast in progressions. This all ’moves’ Kamala’s natal aixs of lunar nodes which goes over 24 º Gemini (North Node)/24 º Sagittairus (South Node). As you can see, Kamala has during 2020 her lunar nodes return, which also means this is such a big year for her! One more time, angular axis Asc/Desc has been moved, and this is so so important...

-          Kamala’s Solar Arc Moon is at 24 º Gemini, ’sitting’ at her natal Asc 24 º Gemini, and her natal North Node. On 14th December there will be the solar eclipse at 23º Sagittarius, which will put more ’cream’ on this.Funny or not, Melania Trump has her progressed Sun (husband) at 24º Gemini too, during 2020! Melania's secondary progressed Venus is at 29º Cancer, at the very end of one sign, also showing us some change may come for her love partner. Moreover, it will be just in oppostion with the US secondary progressed Moon (voters) at 29º Capricorn (as well as progressed Pluto of the US) - is this a sign that there is literally opposition between Donald Trump and people of the US, even through Melania's chart?

-          Kamala iz born with the Full Moon in her chart, which brings culmination in life (Trump also was born with the Full Moon in his chart, plust there were lunar nodes included, better say he was born with eclipse in his chart, Biden was born on 20th Nov 1942, just two days before the Full Moon at 29 Taurus on 22 Nov 1942, too. So, all of them, are having the Full Moon in their charts!). Saturn  at 28 º Aquarius solves the opposition between her Moon 27 º Aries and Sun 27 º Libra, with sextile /trine, which means that transit Saturn on election day, at 26 º Capricorn, squaring her Moon and Sun – is helping her to manifest things!  Also, we must not forget retrograde Mars in Aries during 2020, for it turned retro at 28 º Aries (on 10th September), ’pushing’ her natal Full Moon aixs over 27 º Aries/27 º Libra even three times during Mars’ journey through the sign of Aries: late August 2020, mid September 2020 (in retro motion), early January 2021. 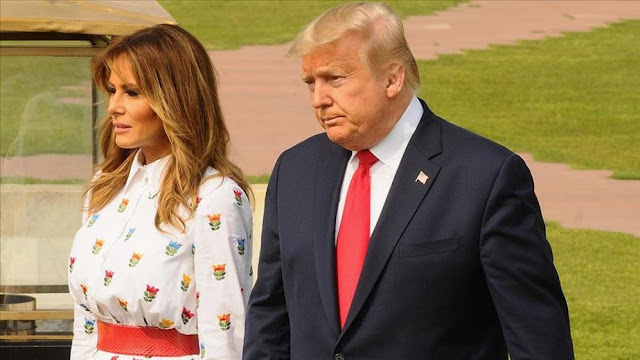 -          Trump has very’ heavy’ transits right now. Tranist Saturn hits his natal Venus 25 º Cancer (ruler of his MC – he as President, his status, reputation). His natal Venus is in conjunction with Saturn 23 º Cancer, and Saturn in Cacner is weak, so that’s why now he is going through hard moments (Covid-19 issue, recently his brother passed away, etc). Jupiter will soon also make an oppostion with his natal Venus/Saturn conjunction. As he has natal Jupiter in Libra, in square with his Venus/Saturn conjunction, we may expect that more problems (affairs) he may have. Recently, just after Jupiter turned direct at 17 º Capricorn, squaring his natal Jupiter 17 º Libra in his 2nd house (money issues) – his taxes affair came out into the public.

-          In his Solar Return Trump has the Sun (ruler of his natal Asc 29 º Leo) in 12th house, which is not promissing for being President, and his Solar Return Asc sits exactly at his natal Venus 25 º Cancer (together with his natal Saturn 23 º Cancer).

-          Trump’s Solar Arc Uranus (nataly it is in his 10th house- he as President) is at 29 º Leo, making conjunction with his natal Asc 29 º Leo, which could bring him stress and unpredictable moments, ’out of blue moments’.Trump's secondary progressed Moon is at 18 Virgo, squaring his natal Uranus in 10th (he as President). In natal chart, he has the Moon/Uranus opposition, which means that progressed Moon in square with natal Uranus - also brings him some kind of stress, unepxected things. It is interesting that Trump's wife, the first lady, Melania Trump, has in her natal chart the Sun (husband) at 5º Taurus, in conjunction with Saturn 11º Taurus. Midpoint of her Sun/Saturn is around 8º Taurus. On 3rd November 2020 (election day) transit Uranus (change) is just crossing over 8º Taurus- one more sign that the current President Donald Trump could be under stress and some change. Just 3 days before election, on 31st October 2020, there will be the Full Moon at 8º Taurus, together with transit Uranus, hiting Melania's midpoint of her Sun/Saturn. This will put much more culmination over Trump's back. Have on mind that Asc/Desc aixs of the US chart I use all these years is going over 8º Scorpio/8º Taurus.

-          Trump has his lunar node aixs return for election, but Kamala has it too (as I’ve been said above already), which both makes important, but she has better moments with transits, I would say.

I would say there will be very tight, and that I would give an advantage to Biden and Kamala this time, but only because of Kamala’s  great astro moments. It is like she is running for President through Joe Biden, her spirit, her energy. She has really amazing sings within her secondary progressions, Solar Arc, and transit, and just because she represent female (black) energy, and I did speak on that since 2016.

If we take a look on charts of the most important leaders from Democratic Party, we find this:

- Thomas Jefferson (of of Father of Nation, and one of the most important person within Democratic Party) has Asc at 0º Aquarius, which comes just after 29º Capricorn

- James Madison has Asc 7º Sagittarius, his Solar Arc Jupiter (ruler of his natal Asc) is right now at 29º Capricorn 26'

As you can conclude, even they are not alive any more, their charts spek still, and will always speak. The main vibe on 3rd Nov 2020 will be in secondary progressed Moon (voters, people, women mainly) at 29º Capricorn, where the most important leaders of Democratic party have something in their Solar Arc directions, or natal charts. This could be one more sign how people of the US will vote!

On 30th October 2020 Irliana Samsara, the owner of StarSoundAstrology hosted me in her podast. We talked on Presidential Election in the US 2020. You can listen podcast here