Presidential Elections in America in 2016 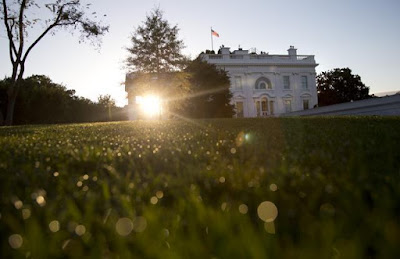 The race for Presidency has already started, although there is about a year before the elections… There are still speculations about candidates from two leading parties, democratic and republican… The recent appearance of Donald Trump in the race for republican candidature got America “on its feet”. Jeb Bush, whose father and brother had held the position of the first man in this country, is also mentioned as a republican candidate. The new resident of the White House will be the one who wins the majority on November 8, 2016, when the elections are scheduled to be held, but also the one who has 22° Gemini somehow activated!

Let us now take a look at secondary progressions of George Washington for the moment when the residence was finished (November 1, 1800), since his horoscope can be still used today, since he was “the seed” as the first President of America! The secondary Venus, the ruler of Washington’s ascendant, is at 21° Gemini 35’, very close to 22° Gemini and in a strong conjunction with Mars (21° Gemini 18’) from USA horoscope! Mars rules the ascendant in USA horoscope (I use 8° Scorpio as ascendant, because it fits perfectly into symbolism that this country was created after independence war – 8° has the symbolism of war, as well as the very sign of Scorpio, while Uranus – independence, freedom, is exalted in Scorpio as well), and it represents the Washington DC, the capital of USA. 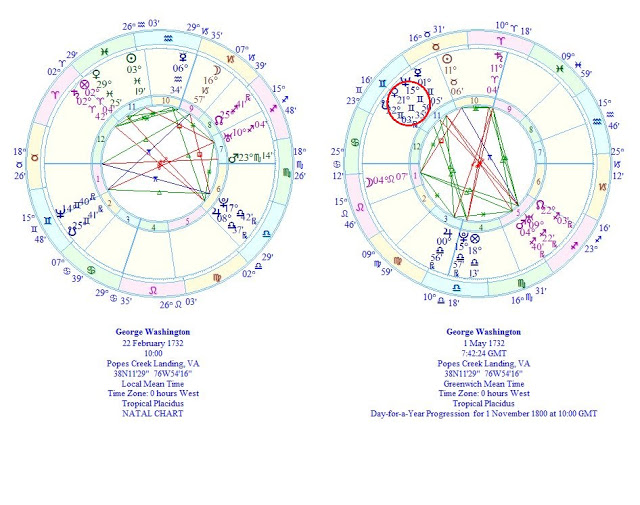 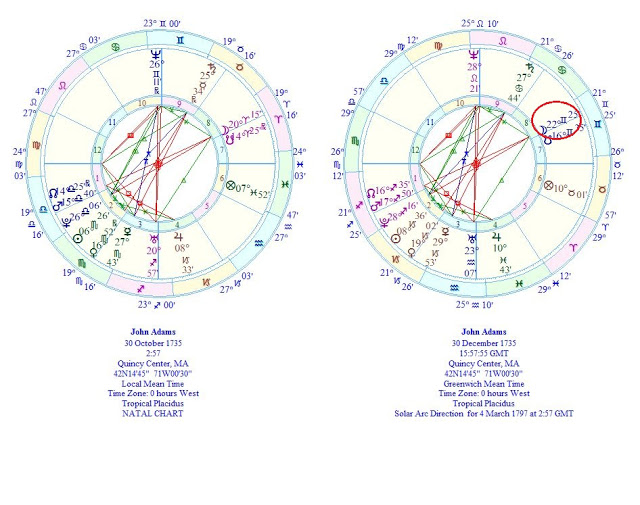 Theodore Roosevelt, the Republican, became the President on September 14, 1901. The residence got its name “White House” in 1901, after the idea of this man, because of its white façade. In the moment when he became the first man of the country, secondary IC-MC axis in USA horoscope was across 22° Gemini 39’/22° Sagittarius 39’! 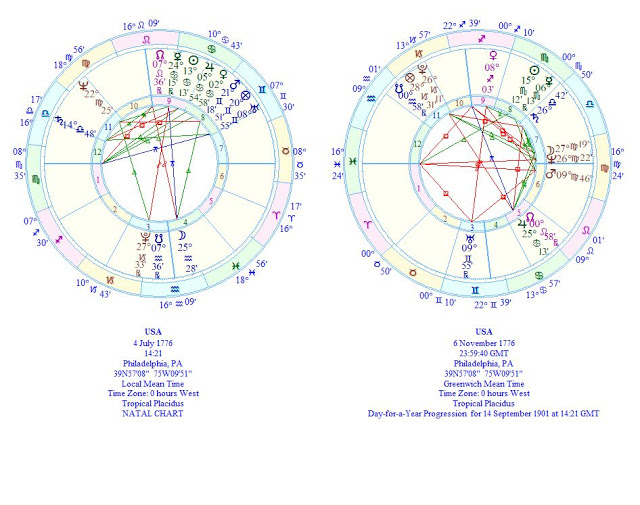 Finally, White House got its present appearance in 1934, when Franklin D. Roosevelt moved the so-called “Oval Office”, the official office of the President, into the west wing. Franklin became USA President on March 4, 1933, and in his natal chart he has MC at 22° Gemini 08’! 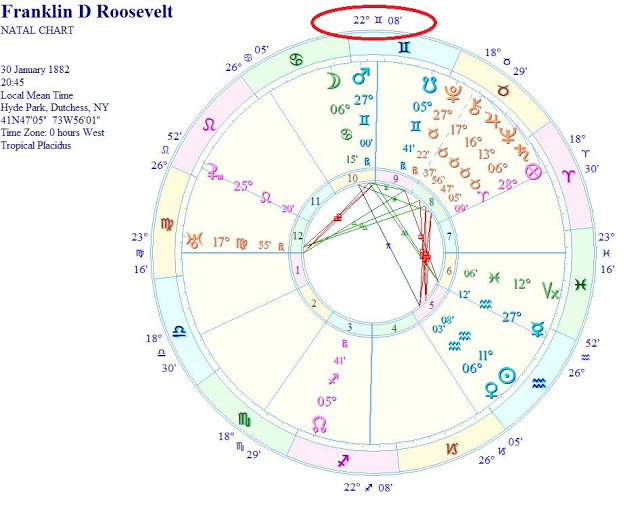 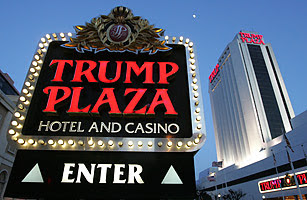 Jupiter-Uranus midpoint in USA chart is also at 22° Gemini 25’. Uranus (gambling, casino) is in the 8th house (money) and he rules the 4th house (opposition candidate), while Jupiter rules 2nd house (financial system) and is the essential significator for the serious amount of money. In Uranus at 8° Gemini in 8th house we have the picture of Donald Trump, the Republican candidate, businessman who built his empire in casinos and real estate… Jupiter/Uranus combination always speaks of financial risks…, but in this case it might be the picture of over-arming, overuse of some sort of modern weapons in some armed conflict. It is interesting that Donald Trump has a prenatal, solar eclipse at 8° Gemini 49’, at the Uranus of USA, at the planet that represents him in the chart of USA! 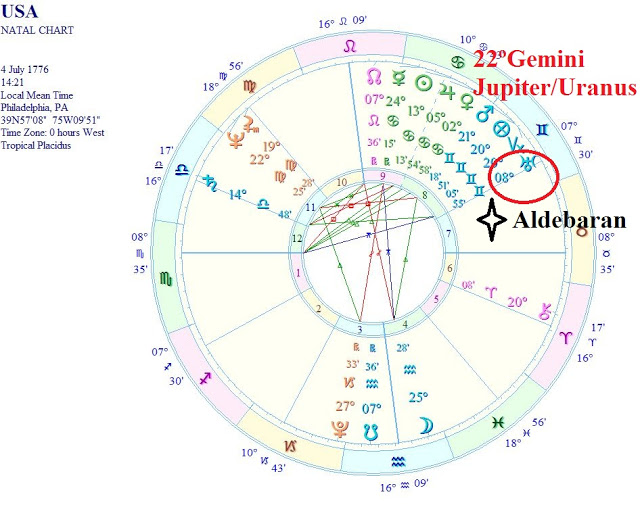 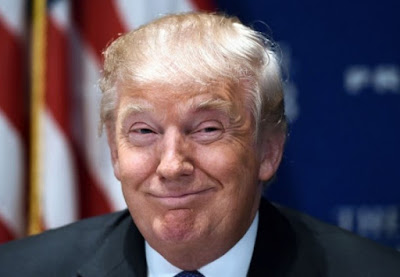 Now, let us take a look at his horoscope. We can see that he has the Sun at 22° Gemini in conjunction with the North Node, i.e. he was born on the day of lunar eclipse that was at 23° Sagittarius 05’. His ascendant is at 29° Leo 58’, where the star Regulus was at that time (now it is at 0° Virgo), which certainly may bring him success. Solar Arc Sun (29° Leo 07’) is even now crossing his ascendant, and it will remain there in the moment of elections, on November 8, 2016 (at 0° Virgo 15’). Transit Saturn at 29° Scorpio is now, while I write this article (September 2015) in square with his ascendant, but since his natal Saturn from Cancer, through dispositor – the Moon at 21° Sagittarius, makes a trine with ascendant, then this is the time for him, he has the support of Saturn. Jupiter also transits his 1st house (him), which may be the picture of “overdoing”, expansions, affairs, which is not unknown to Trump… With Jupiter it is not always safe, for he may bring disappointment because of the overdoing. But if the natal Jupiter is strong, then the transit also offers the support. His Jupiter is in the 2nd house, together with Chiron (wound), so this is also the picture of the financial losses he had. But, this man is saved because his Jupiter goes to the sign of Cancer through dispositor Venus, the sign of its exaltation, which additionally strengthens him, especially in risky situations (Venus in Cancer, as dispositor of Jupiter in Libra, in 11th house, the house of risk). 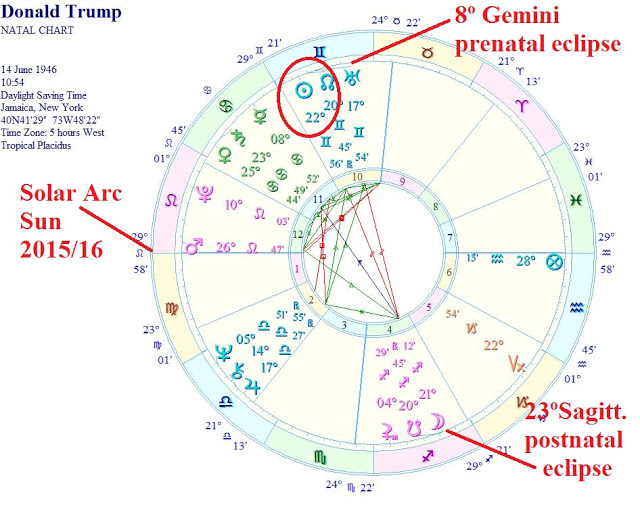 The following solar eclipse at 20° Virgo 10’ on September 13, 2015 will activate Donald’s postnatal (lunar) eclipse and bring him the grand “opening”. This eclipse will also activate his natal Node axis, and it will be very important moment for him!

Also, immediately before the elections, on September 1, 2016 there will be solar eclipse at 9° Virgo 21’, which will activate Uranus (Donald Trump) from 8° Gemini 55’ in the USA chart by the square, which emphasizes some possible military activities of America somewhere in the east (Aldebaran – the “Watcher of the East”). 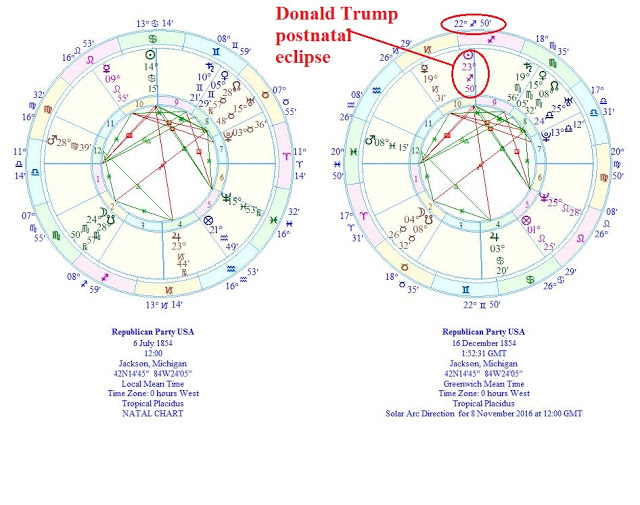 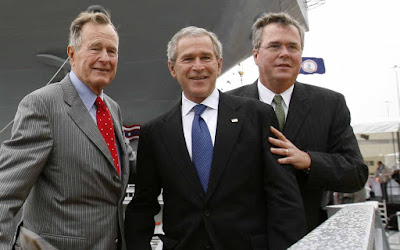 I have mentioned Jeb Bush, the son of George H. W. Bush and the brother of George Walker Bush. It is interesting that Jeb Bush has his MC at 22° Gemini, which certainly brings him somehow into the race for candidacy for the coming elections, and especially interesting is the position of the tertiary Sun (it moves 1° in one month) on the day of elections (November 8, 2016) exactly at 22° Gemini! But I would say that Trump is still in stronger position because his progressive Sun is transiting his ascendant, and also because of the fact that the progressive Sun of the Republican Party will be at his prenatal lunar eclipse. On the other hand, progressive Sun of Jeb Bush will be around 26° Aries, transiting his 8th house, which is not as strong as Donald’s one at the ascendant. 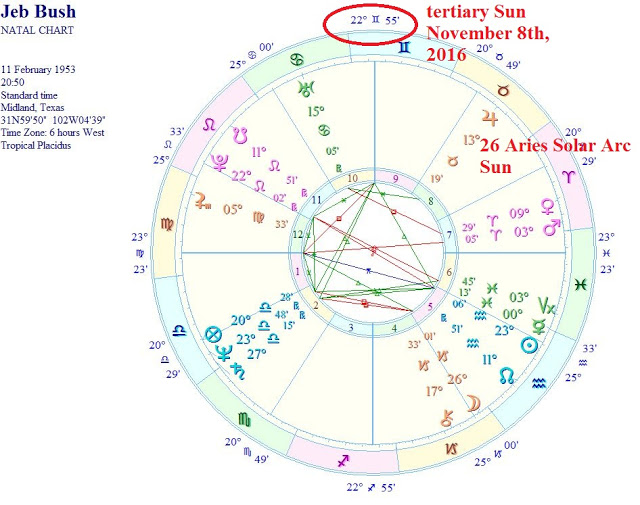 Also, George Bush has his Sun at 21° Gemini, very close to 22° Gemini, which brought him in contact with the White House.

Let us take a look at the chart for the moment of the poll sites opening. The 10th house always represents the ruling candidate – Democrats, while the 4th house in this case represents the Republican candidate. 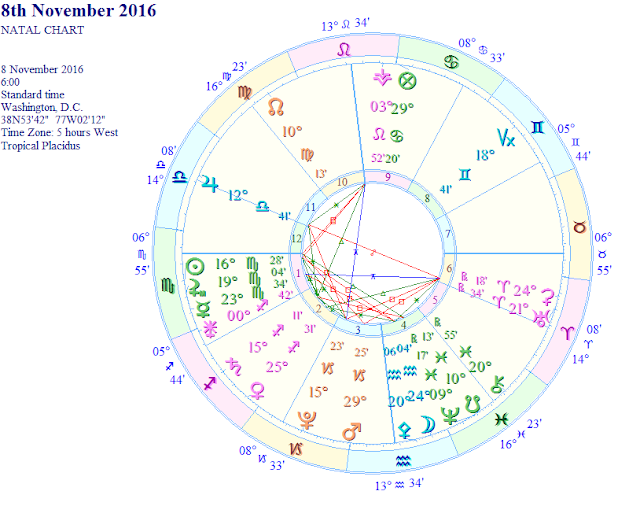 In this chart, with MC (Democrats) at 13°  Leo 34’, the Sun rules this point. Sun transits Scorpio, and Mars (the Sun’s dispositor) transits at 29°  Capricorn – the last or anaretic degree, an indicator of the end!

Let us see the Republicans now. The 4th house represents them. This house has Aquarius on the cusp. Saturn is therefore primary ruler which is in Sagittarius, and through the dispositor, Jupiter in Libra, it goes into the sign of its exaltation. All this tell that really Republicans have much more chance at the coming elections in 2016. 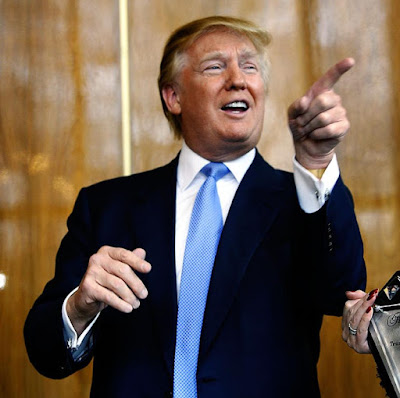 In the end if we take a look at fixed stars, we shall see that around 22° Gemini (where the Sun, the ruler of the ascendant of Donald Trump) are the stars from Orion constellation, that is being connected to USA. Here we have the picture of very big, tall man, with broad shoulders, and emphasized hair (remember the mythological Orion), with big feet and specific gait, and who has problems and affairs with women. Isn’t this the indication of Donald Trump?! If we go back to that part of the article where I said that in the horoscope of America Donald is represented as Uranus at 8° Gemini in 8th house, than I add that all that is in close conjunction with one of the four royal stars Aldebaran (“The Watcher of the East”), so all this might indicate that if Trump becomes the next President of America, he may focus his politics on some armed conflicts in the East.

Since there is a wide trine of Uranus (Donald Trump) and Saturn in Libra in USA horoscope, transit Saturn from Sagittarius that will oppose Uranus (Donald Trump) at the beginning of 2016 might bring this man the candidacy within the Republican Party, and presidential race. The aspect of opposition is now initiating things, since there is a good aspect in natal chart.

Whatever happens, it seems that the new President of America will come from the Republican Party, and that Donald Trump, for now, as the big surprise, should not be neglected… It remains to be seen if anyone else from the Republican Party will come forward and have accented 22° Gemini, for how it seems, this degree is the “ticket” for the White House. 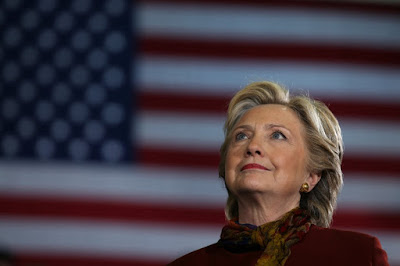 As we don’t have  Hillary’s correct birth date, I used her husband Bill Clinton’s chart, on  the basis that there would be a powerful indication in his horoscope if his wife was destined to be President. I found his Solar Arc Moon at 29° Cancer (the end) opposited by transit Mars at 29° Capricorn (for election day 8th November, 2016). Not a happy chart for a Hillary victory.

Worth nothing as an aside, when Bill Clinton was first elected President in November 1992, his tertiary Venus (ruler of his Libra rising) was at 22° Gemini (the degree I associate with presidential entry into the White House).

Another example: Jacqueline Kennedy had natal Venus (ruler of her 7th house – husband) at 21° Gemini 46’ (almost 22° Gemini). During November 1960 presidential election, her secondary Moon was crossing over 21° - 22° Gemini! 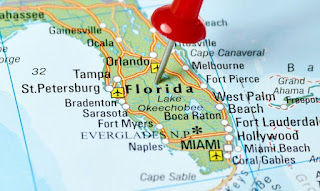 November 2020 sees the next presidential election. Then, the secondary Moon of the USA will be at 29° Capricorn, preparing to ingress Aquarius. Perheps this hints at a woman who will bring something new to the whole world! Remember, on 21 December 2020, there will be the great Jupiter/Saturn conjunction at 0° Aquarius!