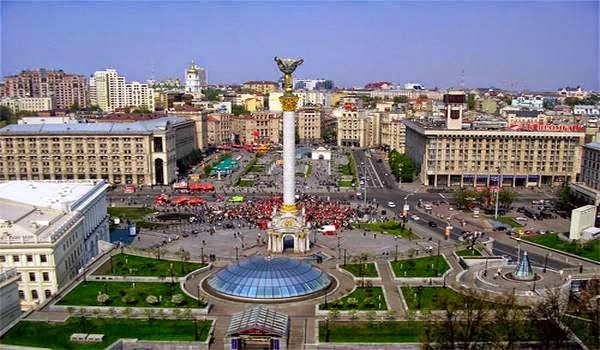 Although primarily considered a beneficial planet, Jupiter can easily be a maleficent planet if its dignity is ‘weak’ in the natal chart. Anyhow, Jupiter represents expansion, and that expansion can sometimes be positive, but also quite negative. Since my research is focused on mapping countries inside the 360 Zodiac degrees, I’ll focus on Ukraine in this article, a country which can be mapped in the sign under Jupiter’s rule, the sign of Pisces, precisely on the central, ‘royal’ 15º Pisces! This degree has proven to be significant through verious important events for this country. Finally, the chart of New Ukraine (August 24th, 1991., 6:36PM, Kiev) has the Ascendant on 21º Aquarius, the degree of Neptune’s exaltation (the second, modern ruler of Pisces).

If we take a look back on April 26th, 1986. (01:23:44 AM, Moscow), remembered by the nuclear disaster in Chernobyl, we can find Jupiter on 14º 23’ Pisces (very close to 15º Pisces, the degree we link to Ukraine). At the first glance, we see a great Jupiter, in dignity, located on the royal, central degree. But, what did that Jupiter bring to Ukraine (15º Pisces) on April 26th, 1986.? A disaster of an unimaginable scale, affecting the human population... Expansion happened, but in a negative sense...

Yod configuration in the chart of First Ukraine

Now, let’s take a look at the chart of 1918 Ukraine and estimate Jupiter’s dignity. We find it conjuct Ascendant. but in detriment (Gemini). It’s the ruler of 8th house (danger) carrying the energy of Chiron (wound) on 26º Pisces. Retrograde Mercury as its despositor takes it to 7º Capricorn (Jupiter falls in Capricorn) in a close conjuction with the star nebula Facies which can symbolize danger, and energy that can’t be tamed, in 8th house (death), and it’s practically the focal point of a Yod configuration with the Moon (the people, masses) on 6º Gemini, and Neptune (the second dispositor of Chiron – wound) in detriment on 5º Leo and ‘weakened’ Saturn (also a malefic, and a traditional ruler of 1st house, but also 8th house of death) on 11º Leo. It’s known that Yod configurations point to possible danger, death, and every Yod configuration is a potential Chiron (wound, pain)... Also, there’s an opposition with retrograde Pluto (death, danger) on 3º Cancer, creating a Boomerang configuration. These are all signifiers of a weak Jupiter in the chart of First Ukraine. 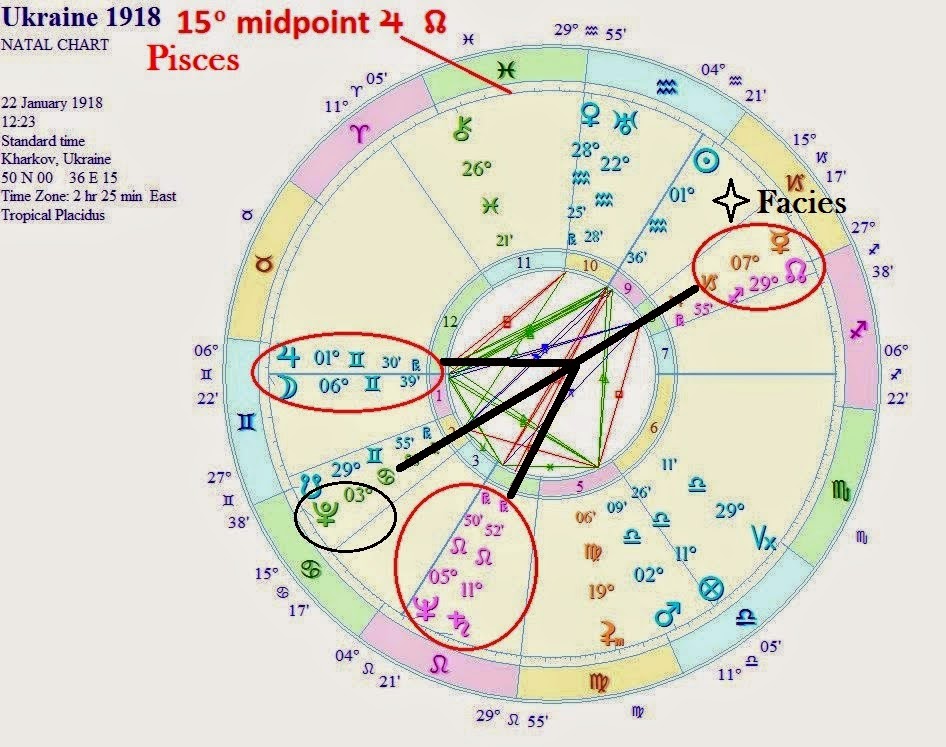 On the other hand, of course the Jupiter transiting 15º Pisces wasn’t enough to give an accurate prediction of an unfortunate event for Ukraine. Transiting planets are only triggers for other signifiers... 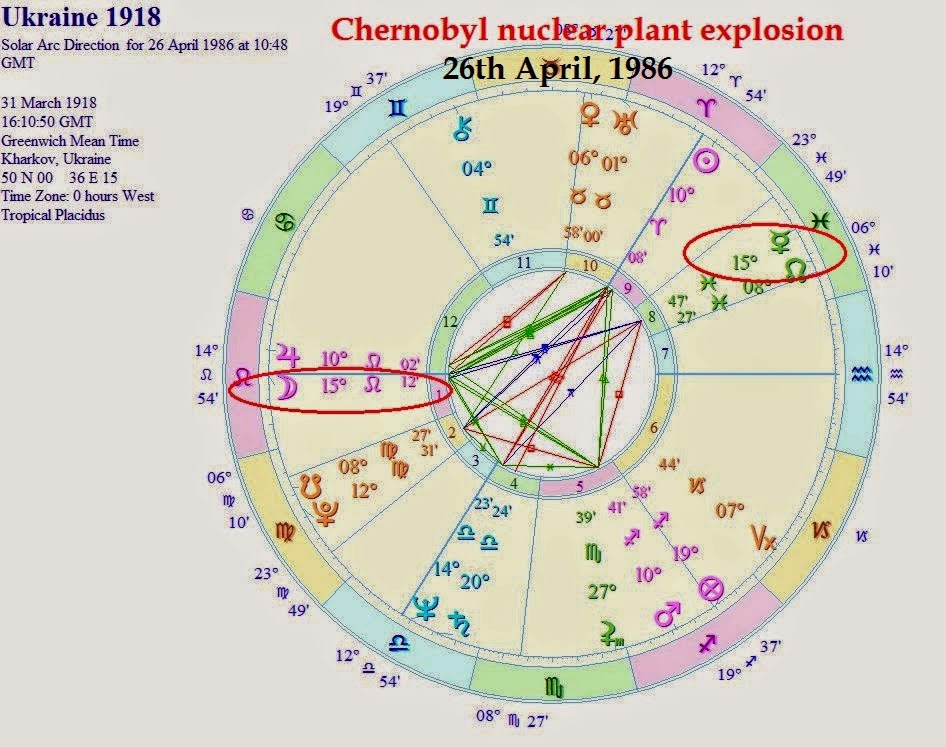 Since the explosion happened on the fourth reactor of  the nuclear power plant ‘Lenin’, it’s interesting to take a look at the tertiary progressions of Vladimir Lenin for that moment, because he’s the ‘elongated hand’ of the nation, being the first leader of USSR, and we can use his chart to follow events that will happen even after his death. In this case, this man is very important because the power plant was named after him, and a name is always charged with energy... As we can see, tertiary Ascendant of Lenin was exactly on 15º Pisces on April 28th, 1986. 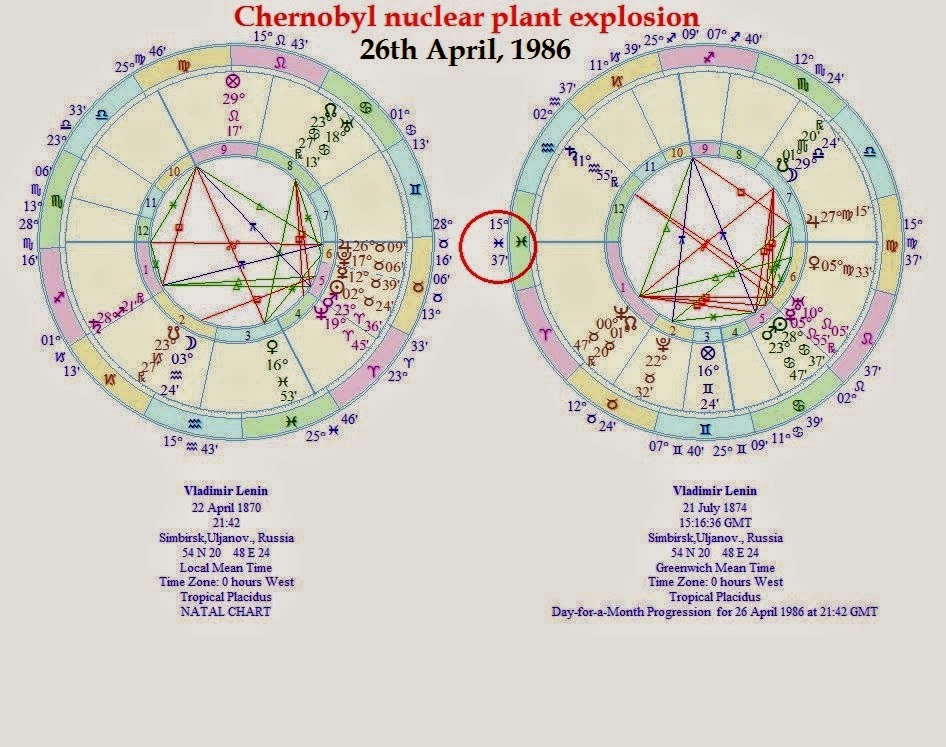 By the way, midpoint of Jupiter (ruler of 8th house of danger) and the North Node (the future) in the chart of First Ukraine is on 15º Pisces, so this degree is a very sensitive place inside the Zodiac for Ukraine, and this disaster left long lasting consequences...
Therefore, transiting Jupiter was just a trigger for the event. 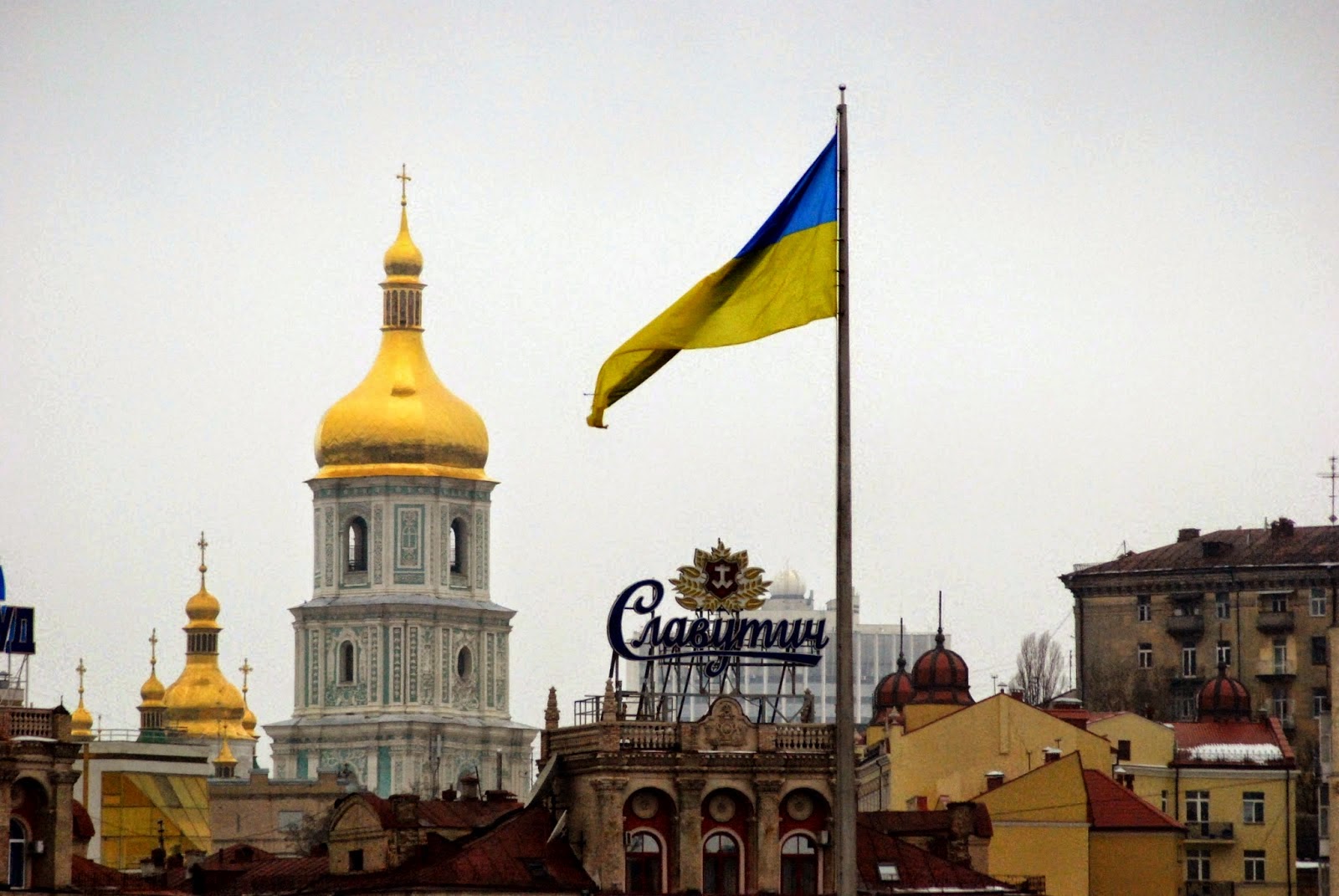 Ukraine is an ex member of the USSR. It reclaimed its independence on August 24th, 1991. At that moment, Solar Arc directions of Bolshevik Russia pinpointed Venus exactly on 15º Pisces! Venus in the chart of Bolshevik Russia is the ruler of 7th house (diplomatic relations) and 10th house (state reputation). 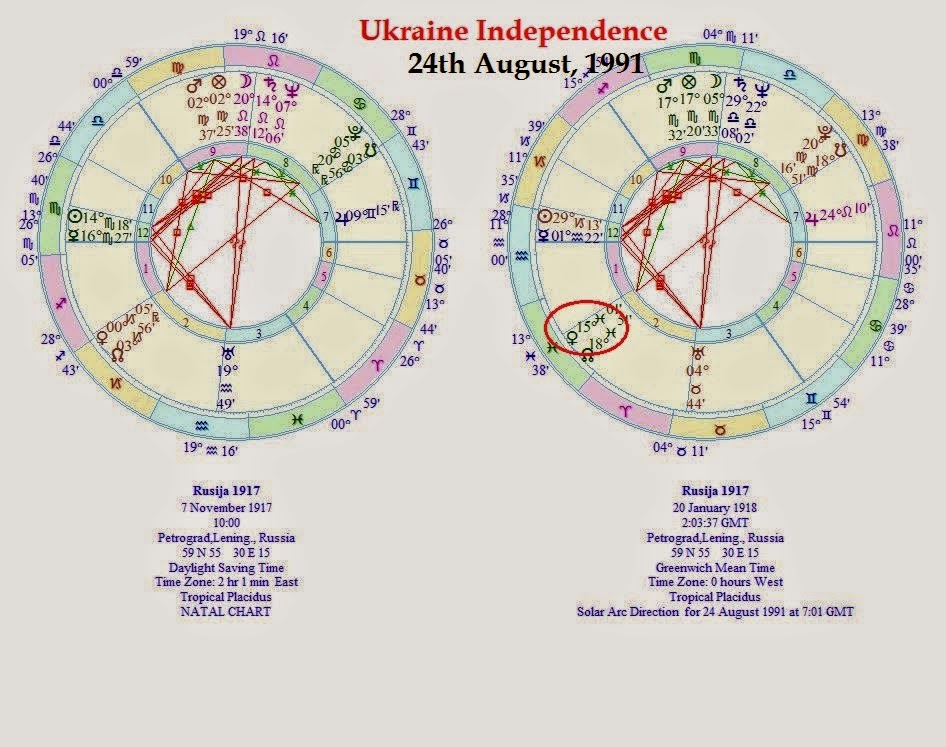 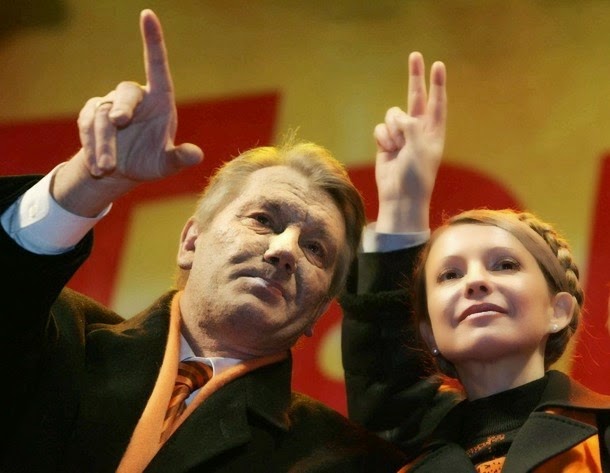 The Orange Revolution is the name for a series of protests and political events that occured in Ukraine in late 2004. and 2005.  immediately after the second round of presidential elections which were won by the prime minister Viktor Yanukovych. His challenger Viktor Yushcenko (together with Yulia Tymoshenko) challenged the results, claiming that they were the result of a fraud, and his followers started a series of demonstrations in Kiev. His requests were accepted by the Supreme Court of Ukraine, repeating the elections which were then won by Yushcenko.
If we take a look at Yushcenko’s chart, we’ll find retrograde (repeating) Mercury (voting) on 15º Pisces in 3rd house (votes) from 10th house (him as a president)! 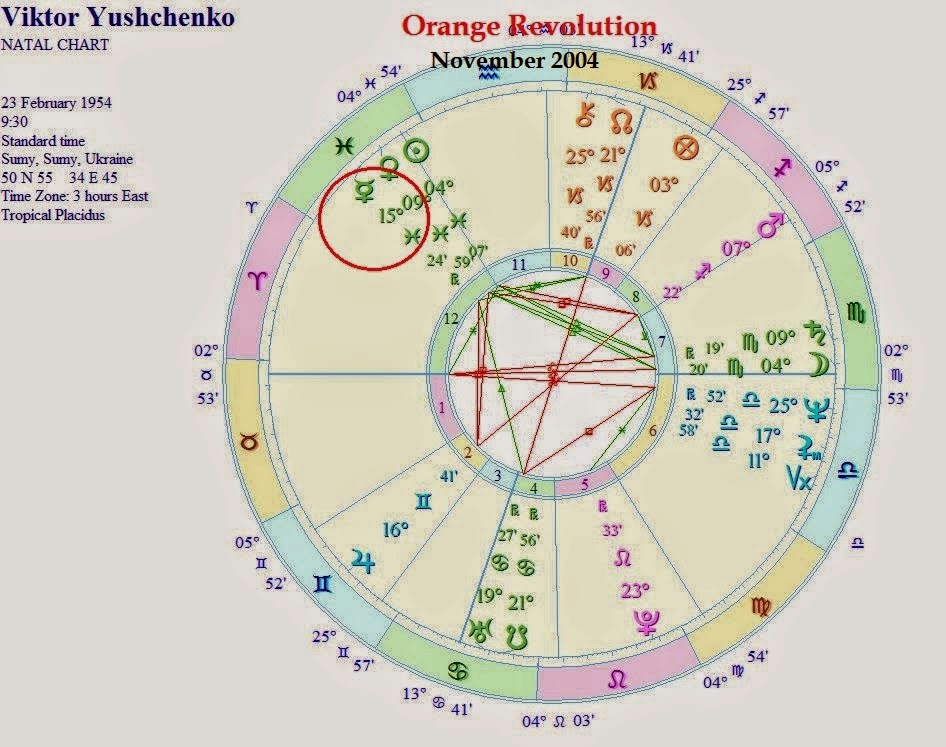 Since Ukraine is the ex member of USSR, secondary progressions of Bolshevik Russia for the moment of the beginning of the Orange Revolution are also interesting, because the Ascendant was on 15º Pisces as well. 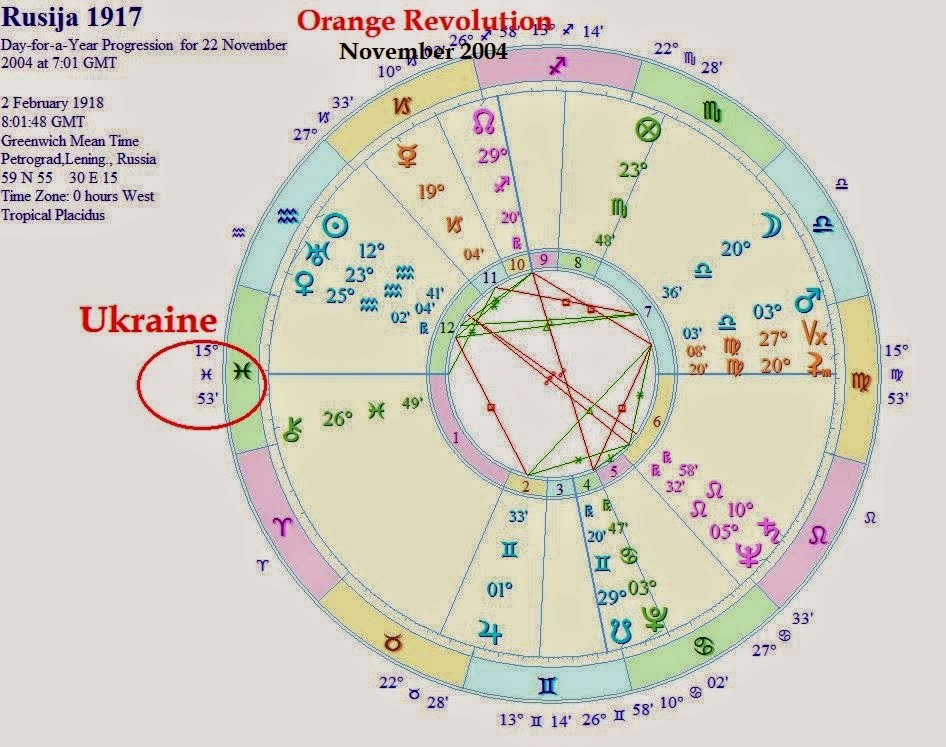 Tertiary progressions make the prediction more precise, due to the fact that the tertiary Moon moves 1 degree in 2 days, so it’s interesting to check the position of the tertiary Moon (the people) of Bolshevik Russia in the moment when the Orange Revolution began. We’ll find it positioned near 15º Pisces! 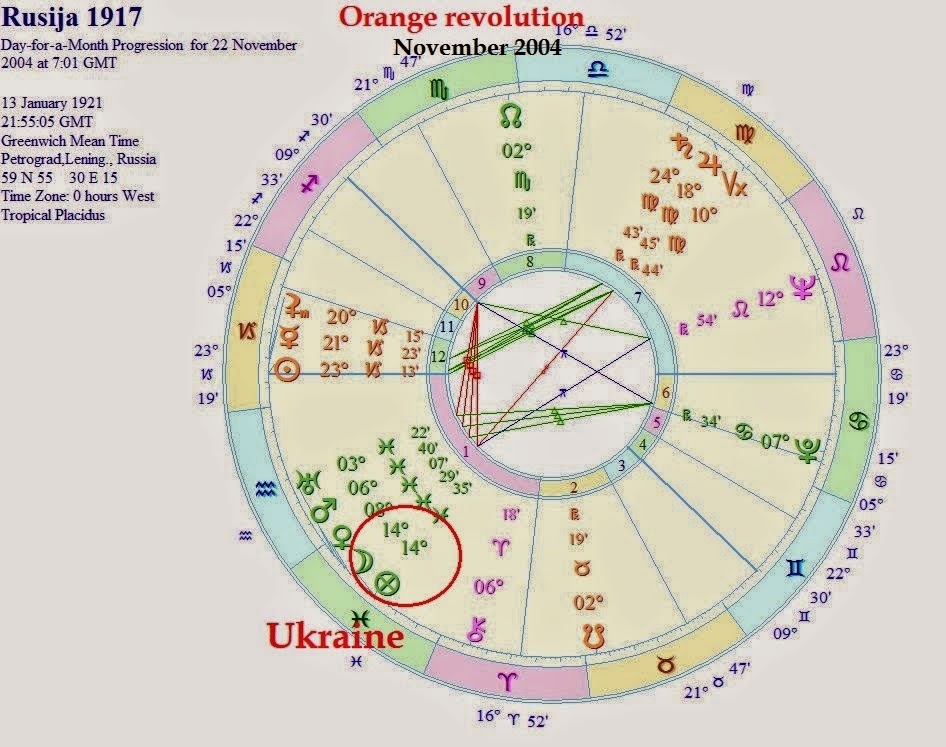 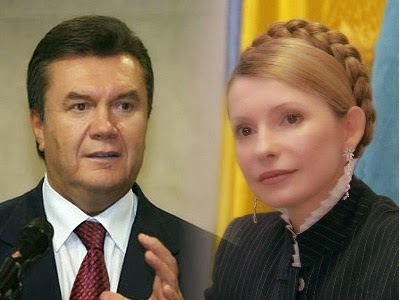 Now let’s take a look back at September 7th, 2006., when a lunar eclipse (full Moon close to the node axis) happened on 15º Pisces (Ukraine). An eclipse holds importance to the individual, but also to the state as a collective. At that time, the Moon (the people) was on 15º Pisces, and the Sun (ruler) on 15º Virgo. Interestingly enough, the Sun in the Solar Arc progressions of New Ukraine was also on 15º Virgo, so we can be certain that this eclipse did ‘touch’ Ukraine.

The opposition between the Moon and the Sun can be an image of a conflict between the people and the ruling figure, but also a conflict between a man and a woman. Only a month before this eclipse, on August 4th, 2006. Viktor Yanukovych became the prime minister of Ukraine, but his mandate ended very quickly – on December 18th. 2007. when the function was given to Yulia Tymoshenko. 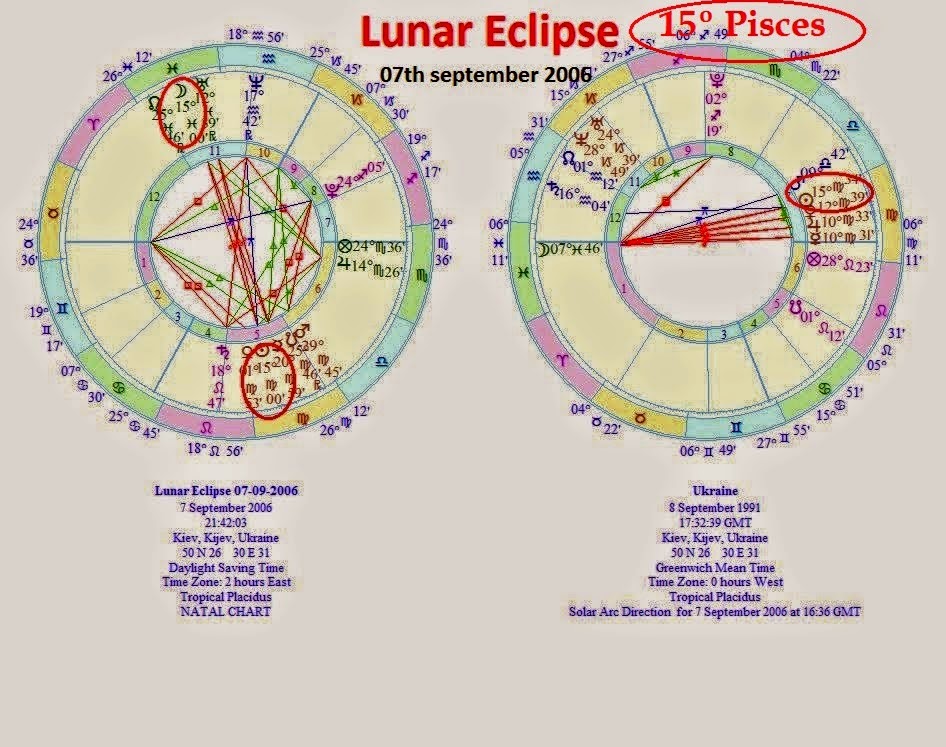 Although September 7th, 2025. is far away, let’s take a look at the secondary Moon of New Ukraine on that date. We find it positioned on 21º Taurus, squaring the Ascendant – Descendant axis of Ukraine (21º Aquarius - 21º Leo). The Solar Arc Venus of First Ukraine is also interesting, located exactly on 15º Gemini, squaring 15º Pisces. Since Mars in Libra (Mars in detriment) lives inside First Ukraine’s Venus, this can all be a symbol of a great energy that will be set free by the people...

This will be the period of the trine between Pluto on 1º Aquarius and Uranus on 1º Gemini, and retrograde Saturn on 29º Pisces will be the focal point of a Lotus configuration, connecting the Earth center (Pluto) and the Sky (Uranus). 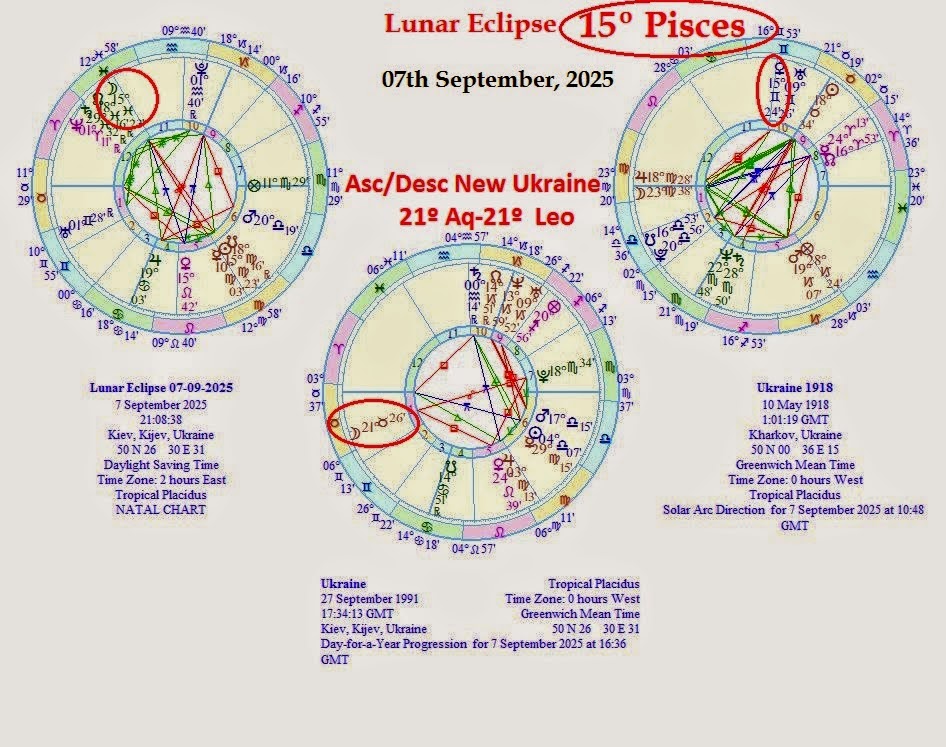 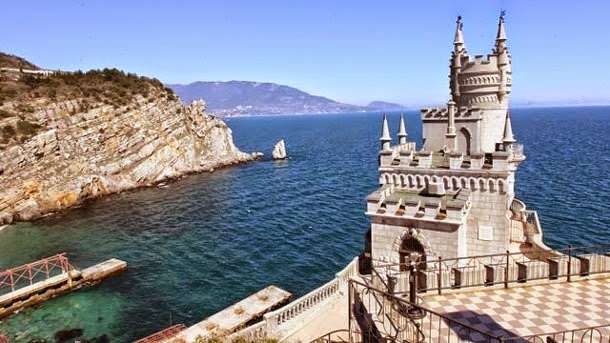 Something currently attracting the attention of the whole world is the crisis in Ukraine. It’s well known that Crimea was annexed by Russia after the referendum held in March 2014. In the Solar Arc progressions of New Ukraine, the Moon (the people) was on 15º Pisces, while the progressed IC –MC axis of Viktor Yanukovych was on 15º Pisces - 15º Virgo. Viktor Yanukovych was the fourth president of Ukraine, from 2010. to March 2014., when he was removed from the position. Since then, he’s located in Russia, where he was granted political asylum. 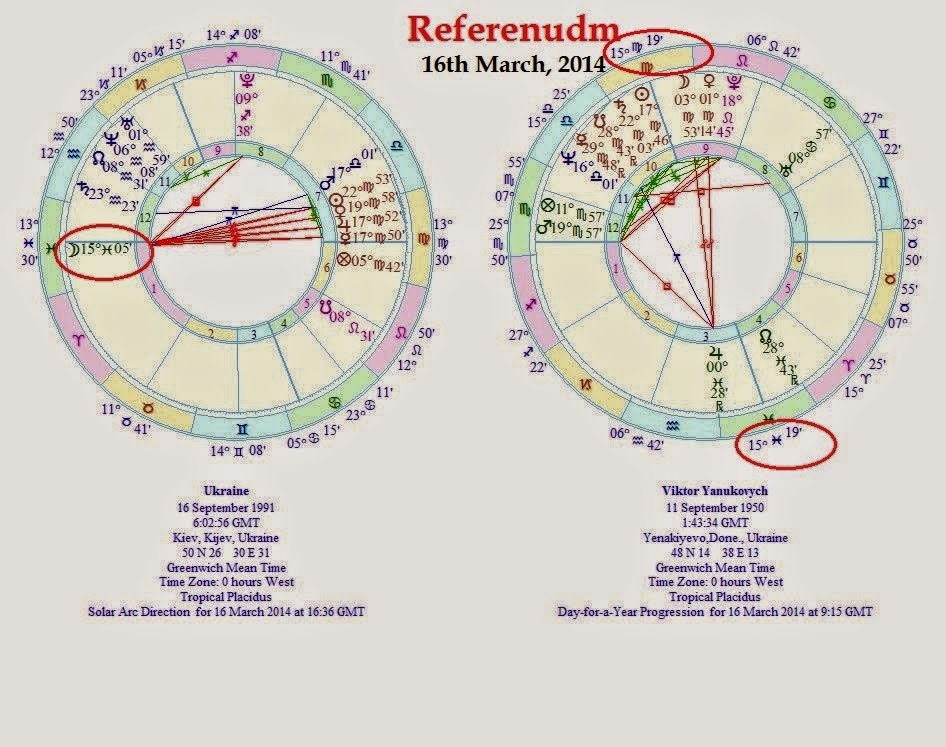 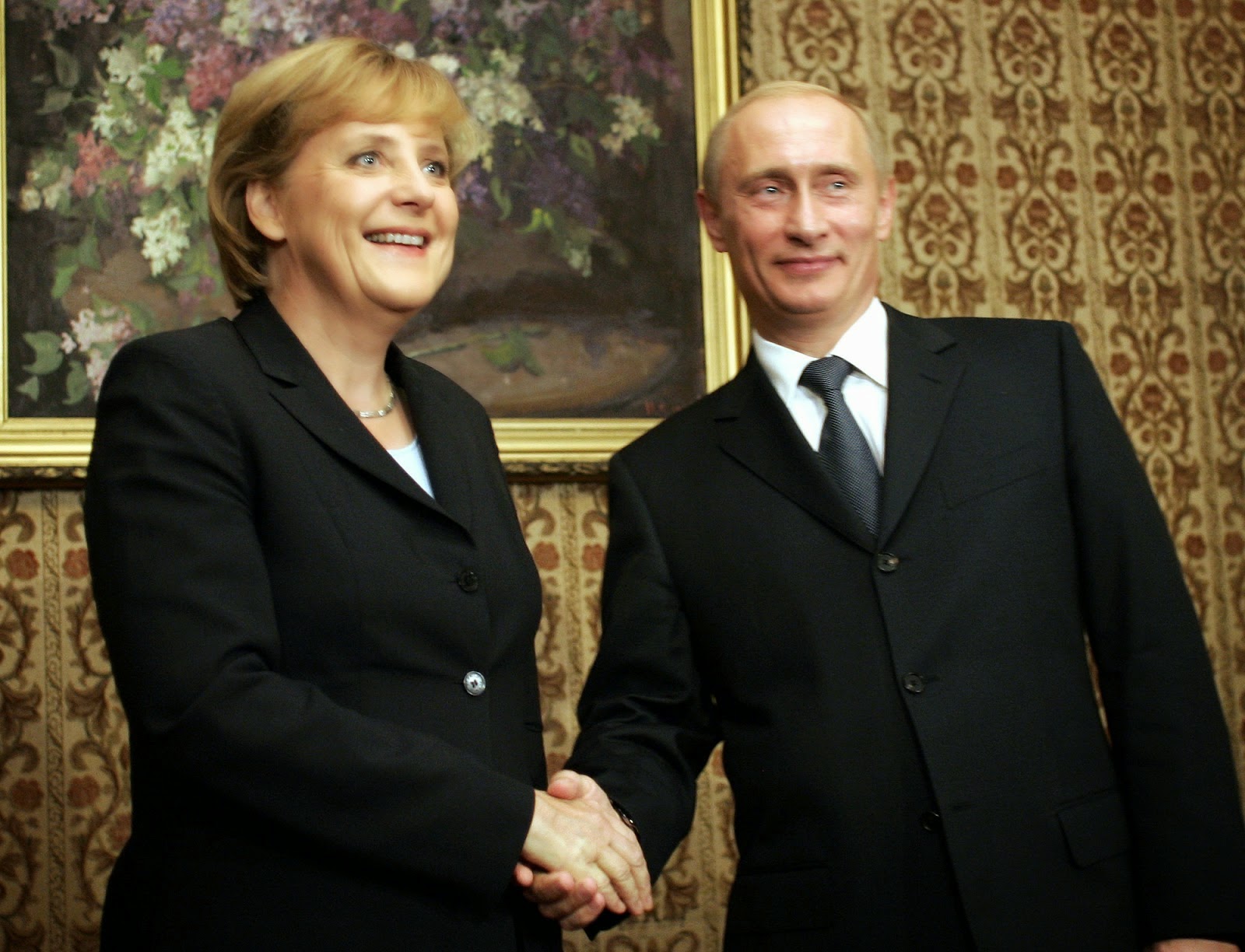 Very often in our lives, we take actions led by our subconcious and unconscious selves. Why does Vladimir Putin have the need to be involved in the internal issues of Ukraine?The Moon (the people) in his natal chart is located in the 8th house (danger, wars), as a ruler of 9th house (foreign countries) in an applying opposition with Mars (an essential significator for wars and conflicts) in Saggitarius. The Moon can be considered a subconscious planet, while Mars is an unconscious planet. It’s interesting that the midpoint of Moon in Mars in Putin’s chart is located on 14º 43’ Pisces, very close to 15º Pisces, a degree that represents Ukraine inside the Zodiac. Also, one more fact makes us understand Putin’s involvement with Ukraine a bit more.In his Antiscia chart, we find the Sun (authority) on 16º Pisces, very close to 15º Pisces (Ukraine). As the Antiscia chart is a sort of our mirror, and our shadow, it’s pretty clear why Putin is so involved in the Ukraine crisis.

Anyway, the following is a very positive thing in this picture. In the moment when the Crimea referendum was held in March of 2014. Putin’s progressed Sun (ruling) was on 15º Saggitarius, in a square with 15º Pisces (Ukraine), so this represents his strong inner need to rule over this country, but since a square represents things stopped half-done, this man could very easily give up on this issue in the time ahead of us... Since the Moon of the German chancellor Angela Merkel is on 15º Aquarius, it’s more than obvious that she’ll have a central role in restoring the balance between Russia and Ukraine, because her Moon is making a sextile to the Sun in Putin’s progressed chart, and a semisextile with 15º Pisces (Ukraine)! 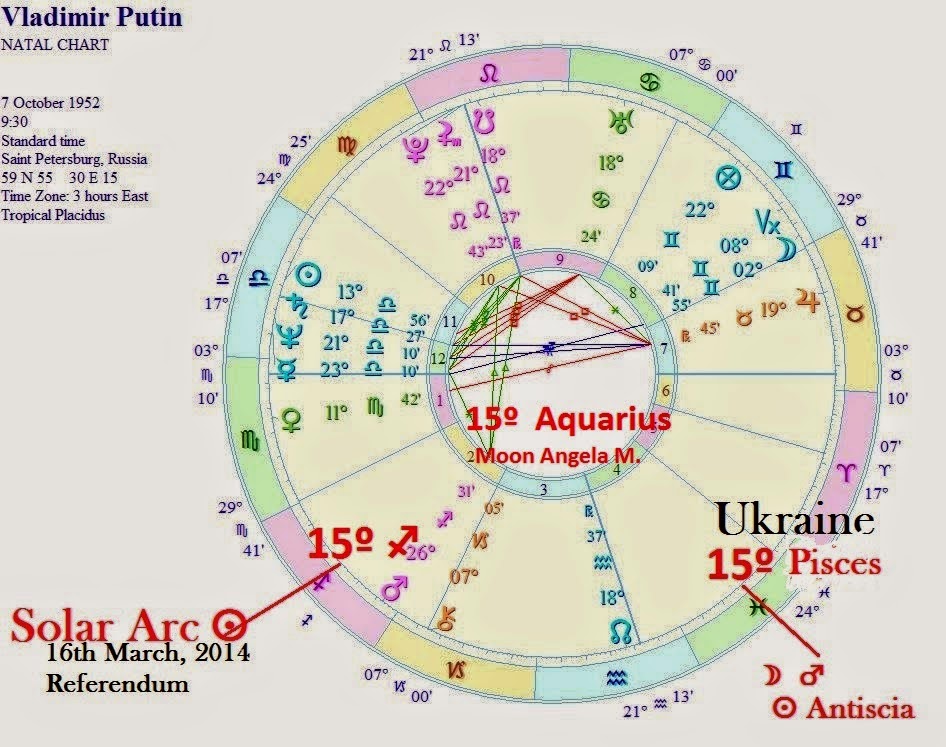 The central, 15º  of any sign is very important, so this is also an image of Ukraine as a central country for gas provision. If we remember the well known gass crisis that shook up Europe in January 2009. because of the conflict between Russia and Ukraine, it’s clear why the role of Ukraine in providing energy is  - central!

Also, we can see the image of former prime minister of Ukraine, Yulia Tymoshenko, on 15º Pisces, a woman who was sentenced to 7 years in prison on October 11th, 2011. on the charges of position misuse, and released  during the coup in 2014. 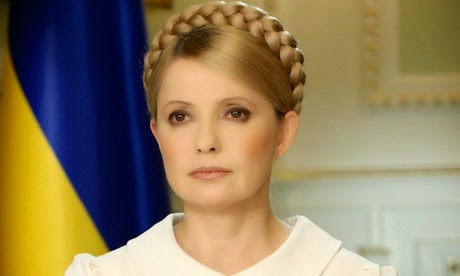 Her Ascendant is almost on 29º Libra, and the ruler, Venus, in a separating conjuction with Jupiter in the sign of its fall, is located on 14º Capricorn in a strong conjuction with Saturn on 15º Capricorn (the degree of Jupiter’s fall), in an opposition with Mars on 18º Cancer (Mars’ fall and a very ‘difficult’ degree). All this brought troubles with the law and prison to her.In the moment when she was released from custody, on February 22nd, 2014. her progressed Venus (ruler of her natal Ascendant – her, but also the 12th house – prison) was exactly on 15º Pisces! The sign of Pisces is the sign of prisons, closed institutions, and the 15º is an image of a central figure, like the role of prime minister... Before her political career, Yulia was a successful but controversial woman in the gas (Pisces) industry which brought her riches... 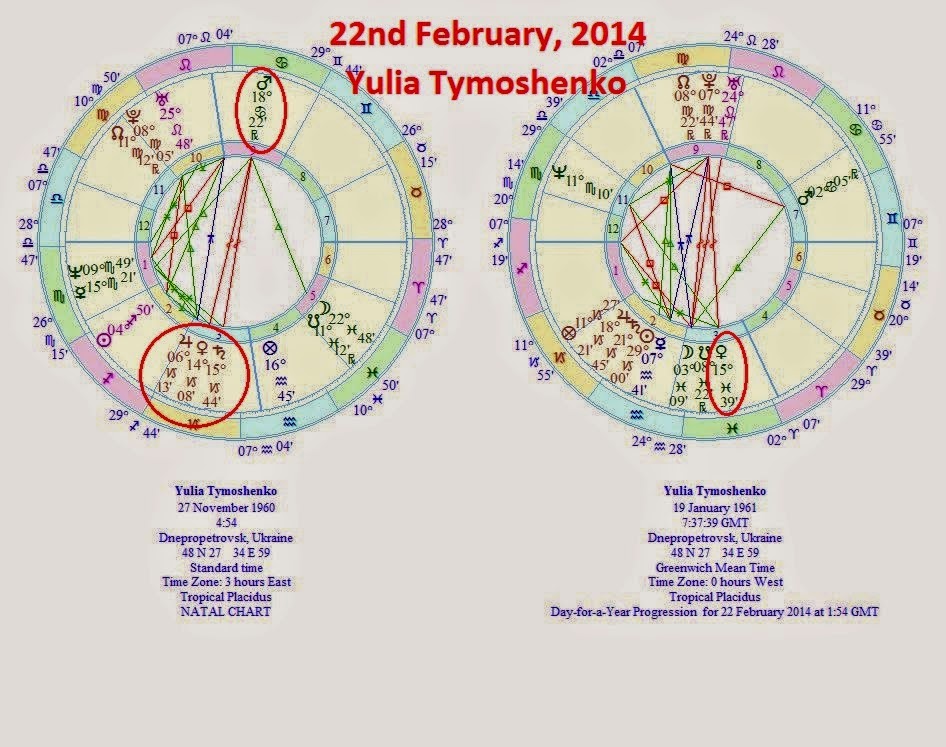 Finally, if we want to estimate the relationship between Russia and Ukraine from the point of degrees which represent these countries inside the Zodiac (Russia on 19º Libra and Ukraine on 15º Pisces) we can tell that they are in an inconjuction (quincunx) with the orb of 4 degrees (emotions) and that this aspect is asking for a lot of inner, emotional adjustment to each other...

You can read more about Ukraine in my articles: Mikhael Gorbachev and the Uranus return 2014. and Russia and 19º Libra

In the meantime, I wrote Minsk and 15º Scorpio.
Here you can read my work on Zeleneskey/Putin/Biden synastry and how I predicted he will become President, but also how I predicted that Putin is going to 'eat' him literally.  Volodymyr Zelensky: "I Will Never Let You Down"!