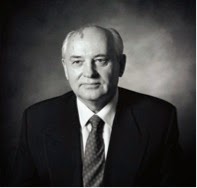 It is generally well known that every 7 years, Uranus, the planet of changes and awakening of the cosmic mind, changes its sign within the Zodiac If 7 years is multiplied by 12 (analogues to the fact that the Zodiac consists of 12 signs), we get that the Uranus cycle is 84 years, i.e. this is as much as it takes for it to get through the whole of Zodiac, which means that living long enough to experience Uranus return is a very significant moment in one’s life, especially having in mind that many do not live long enough to experience it. Realistically, it is possible to experience only one Uranus return. 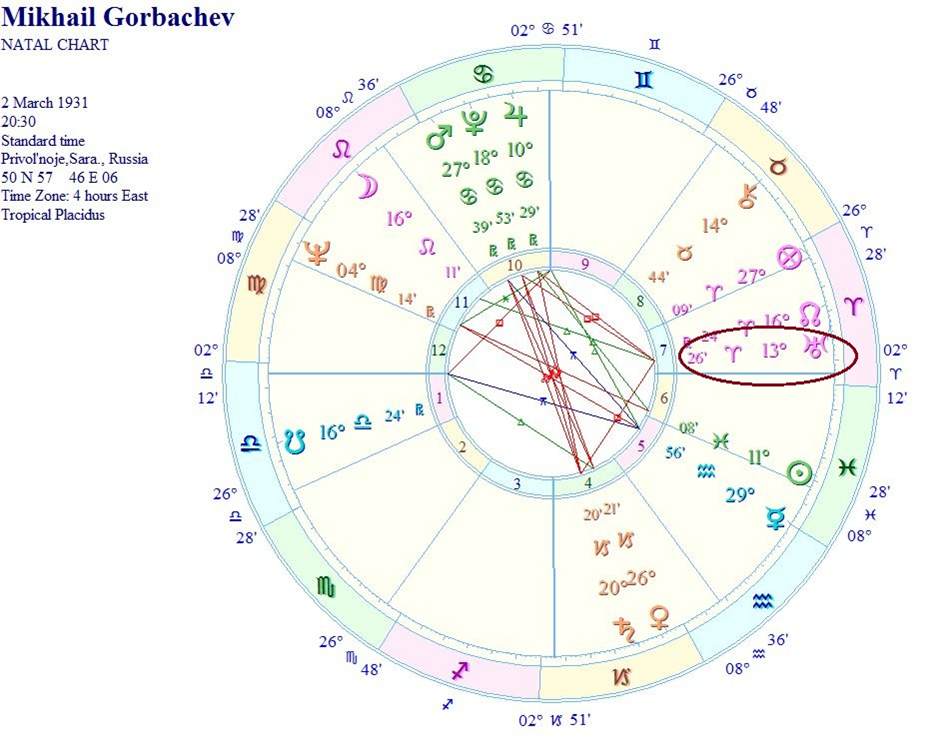 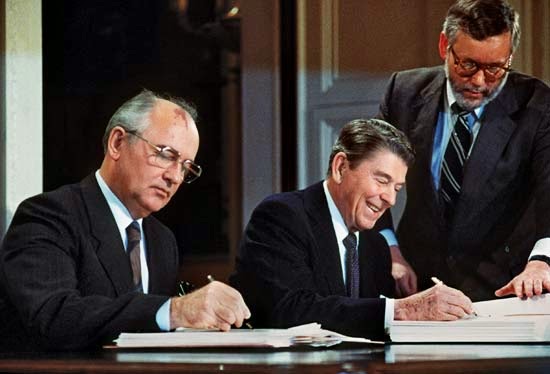 The last USSR President, the winner of the Nobel Prize for Peace, the man who deserves credit for ending the Cold War – Mikhail Gorbachev has recently experienced Uranus return. Uranus, in his chart, is at 13° Aries in 10 (the country’s reputation) from 10 (he, as a ruler), thus, precisely the days of the Great Easter Cardinal Cross (April 2014) were very significant for this man, but also for the whole of Russia, the Russian people, having in mind that from his chart we can follow the destiny of this nation, even after his rule. He was supporting reforms, both internal and external. Relations with the West were significantly improved during his rule and he was the first Soviet President who visited the United States, upon the invitation of the then American President Ronald Regan. When Regan and Gorbachev met in Reykjavik on 11th October 1986, in order to talk about decreasing the nuclear ballistic missile weapons in Europe – Chiron (healing) was at 21° Gemini, at the same degree of the ruler of Ascendant of the United States of America (Washington D.C.), Mars, whereas the Sun (President), in the chart of the New Russia, will find itself on this very degree in few years time. The result of this meeting was signing of the Agreement.

If we look back now to the recent Great Cardinal Cross, than we find that this combination has activated the Sun (President) at 13° Cancer in the chart of the United States, then the Sun (reputation, power) at 13° Libra in the chart of the Russian President Vladimir Putin, but also his Venus in the directions (diplomacy, foreign relations) at 13° Capricorn, as well as the progressive Sun of Russia at 13° Cancer. Added to all this is the aforementioned Uranus at 13° Aries of Gorbachev. Further, having in mind that the recent situation about Ukraine (and accession of the Crimea to Russia) has significantly worsened the relations between Russia and the West (the United States of America and European Union) and that the very Gorbachev appealed to both sides, to the American President Obama and Russian President Putin, to find a peaceful solution in order not to violate the unity of Ukraine, it is not difficult to conclude that Uranus from 13° Aries in his chart is something that is important and it is here that we should consult the chart of his Uranus return.

Uranus came again to his natal position on 19th April 2014, just before the very Great Cross. Finally, Gorbachev offered his assistance in facilitating a peaceful solution related to the Ukraine crisis. Mercury at 29° Aquarius lives in his Uranus, as the ruler of his 3 (negotiations) from his 10 (him, as a ruler). The last degree (29°) of free and humanitarian Aquarius quite certainly points out to one great synthesis of openness towards finding a peaceful solution.

Those who read my article USA and 13º Virgo - 13º Pisces Axis  will recognize this axis in the Ascendant – Descendant axis of Uranus return of Gorbachev, which only points out to a very strong connection of this person, and by this of the Russian people and Russia with the United States in the times ahead. Further, another interesting thing is the position of the Moon (people, nation) at 21° Sagittarius in exact opposition with the ruler of Ascendant of the USA (Washington D.C.), Mars, but also with the Sun (power) from the Russia’s chart, as well as with the Moon in the directions (as everything in the directions moves by 1° in 1 year), in the Davison’s chart (joint horoscope) of the USA and Russia, during 2014. 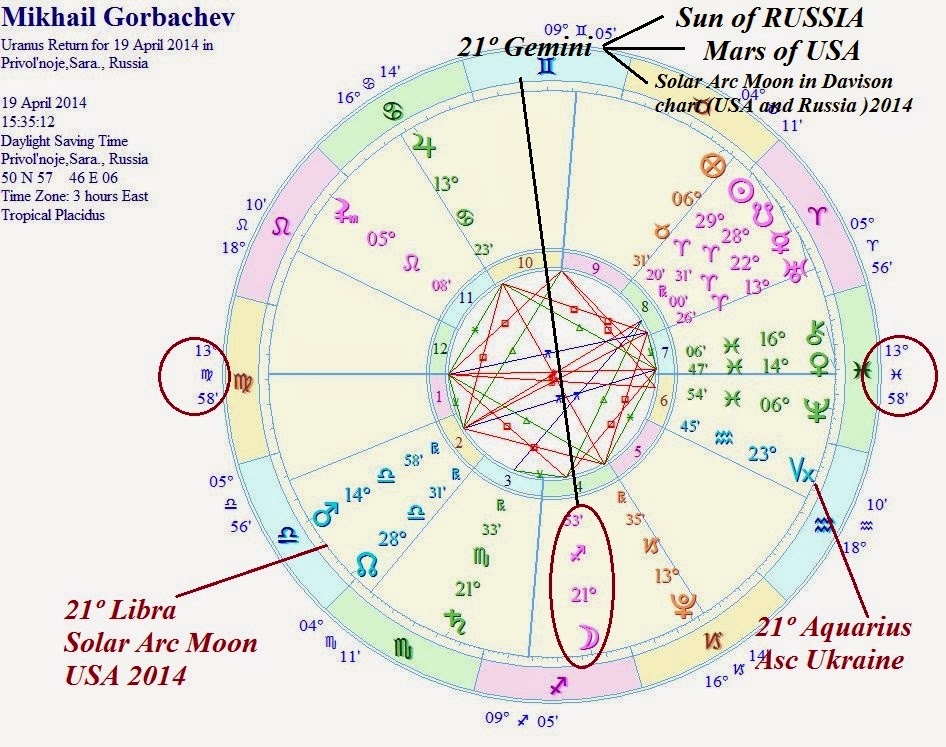 However, as precisely this, 2014, the Moon in the directions (people, nation) of the United States is at 21° Libra and as it resolves this opposition through 21° Gemini - 21° Sagittarius, by a trine-sextile, it seems that there will be an option of getting out of this tensed situation. The Moon of the United States carries along all the planets from Cancer in the USA’s chart, amongst other things the very Sun (President, rulers) at 13° Cancer, activated by the Grand Cross, so it is here where diplomacy (Libra being the symbol of diplomacy and kindness) can balance all the misunderstandings, conflicts (oppositions). 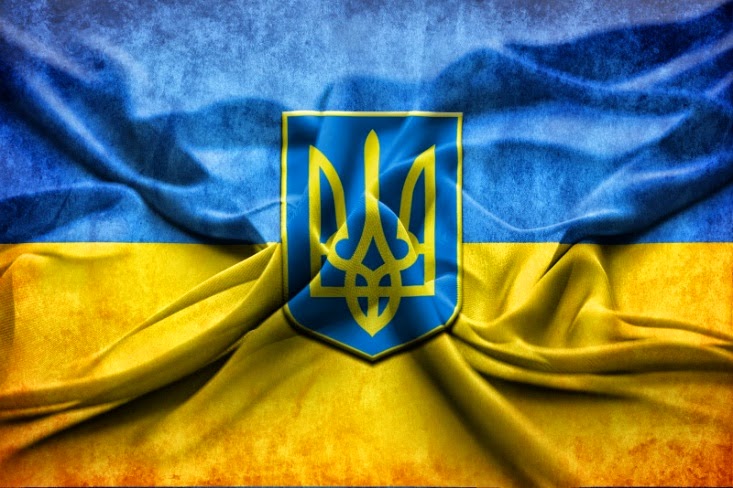 At the very degree of Neptune’s exaltation, at 21° Aquarius, is the Ascendant (circumstances in the country) of Ukraine (24th August 1991, 18:36, Kiew, Ukraine), therefore, it is not hard to conclude now that this degree will be supported both by 21° Gemini and 21° Libra, but also by 21° Sagittarius… Practically, we are getting a Great Air Trine which will be activated with the help of 21° Sagittarius, i.e. the Moon in the chart of Uranus return of Mikhail Gorbachev, i.e. the Dragon configuration.

Let us also look at the Ascendant-Descendant axis in the directions of the Ukraine at the moment of the fifth Uranus – Pluto square, i.e. in the days around the Great Easter Cross. What do we see? We see that it goes through the axis 13° Pisces - 13° Virgo and that it is precisely identical to the axis I link to the United States, as well as the Descendant – Ascendant axis from the chart of Uranus return of Gorbachev. All these are indicators that everyone will be mutually directed towards each other, and that a solution may be found in a dialogue (a Great Air Trine points towards the intellect, the mind…) 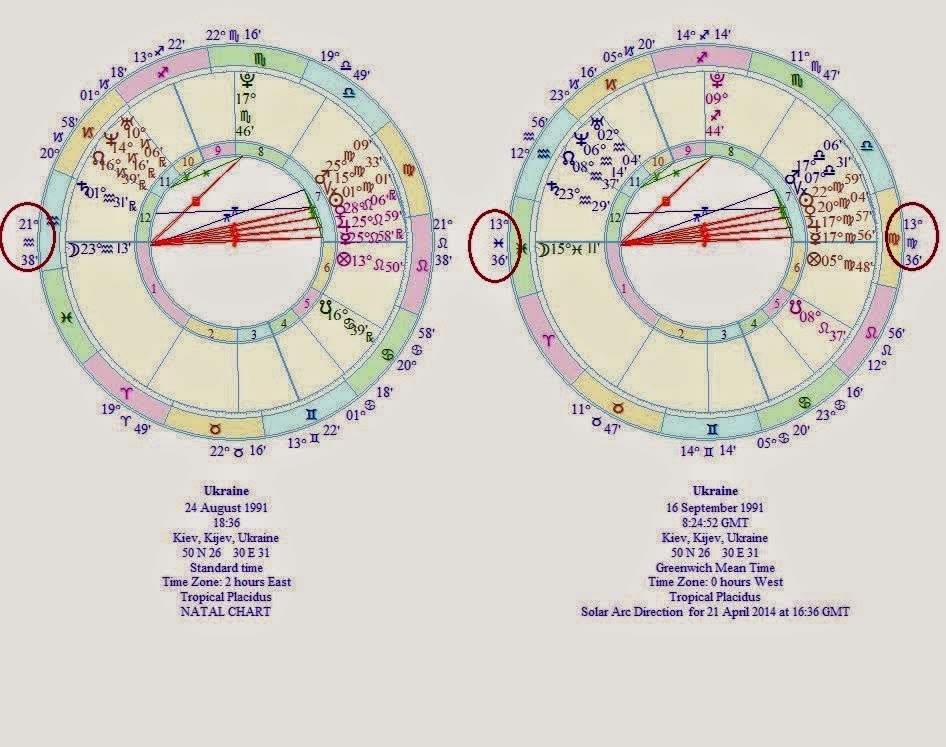 „The Guardian of Europe“ 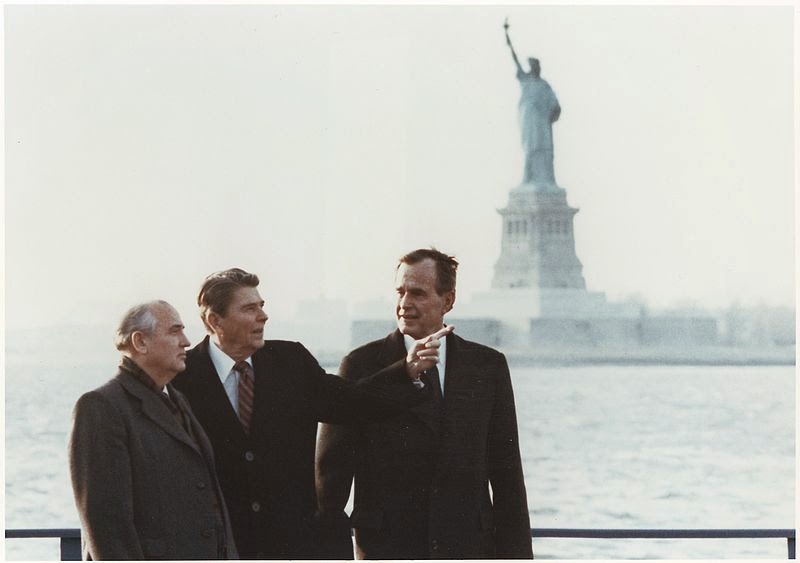 The largest star in the sky, Sirius, is deemed to be the “Guardian of Europe”. We know that the Sun (13° Cancer) in the chart of the United States is in a very close conjunction with this star (14° Cancer 15’). I have already mentioned in the text above that this year, 2014, the Sun in the progressions of Russia is at 13° Cancer. However, it is interesting here that Gorbachev  in his past life horoscope (Dwadasamsa chart) has his Sun precisely at 13° Cancer, which is why it is clear to us why in this life he has the need to bring harmony into peace and relations with the West, above all, with the United States…

Also, I have noted in this chart that the Moon is at 14° Aquarius, where the Moon is in Davison’s chart (joint horoscope) of the United States and Russia, where the Moon was on the date of the Great Cardinal Cross. This is a close conjunction with the star Rotanev (16° Aquarius) from the constellation of Dolphin which can point out towards saving from every trouble through kindness and kind nature. 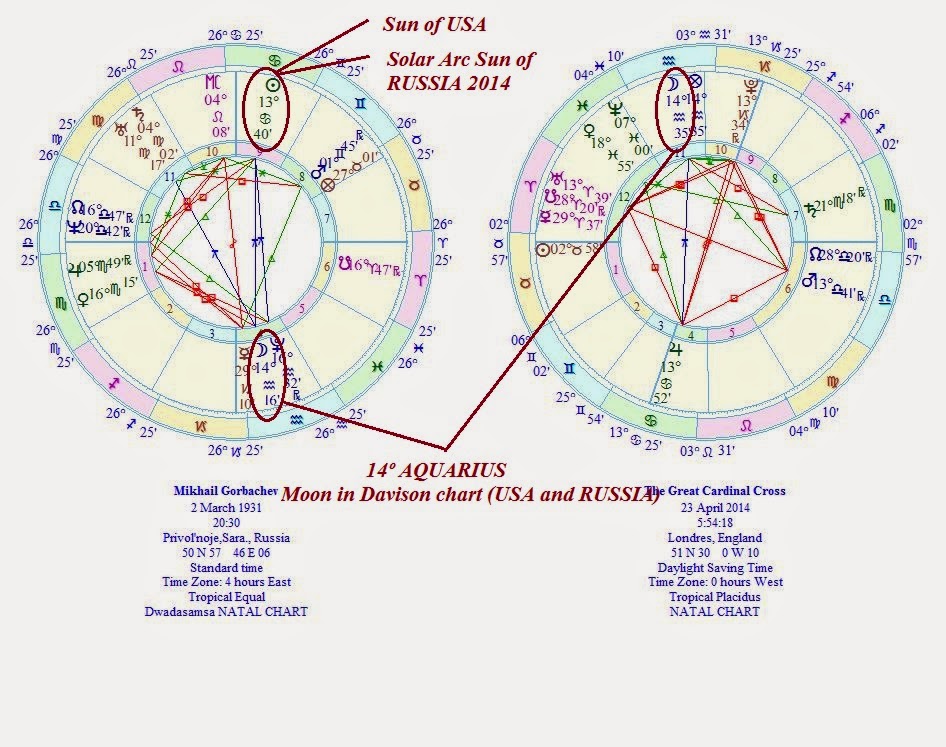 The ruler is always the “extended hand” of the whole nation, depending on which he, himself, is open to change – this will reflect onto the overall nation, state… The fifth Uranus-Pluto square (of 21st April 2014) has activated the fifth energy center (the throat Mercury chakra) and it is needed here, in silence, to change the convictions for the circumstances around us to change. Precisely Ascendant-Descendant in the chart of Uranus return of Mikhail Gorbachev goes through 13° Virgo - 13° Pisces axis, which is the axis of Mercury’s exaltation and fall, thus, it is needed here to make a balance between the Mind, which has a tendency of taking, analyzing, thinking, and is of utmost intelligence (13° Virgo) and Silence (13° Pisces)…