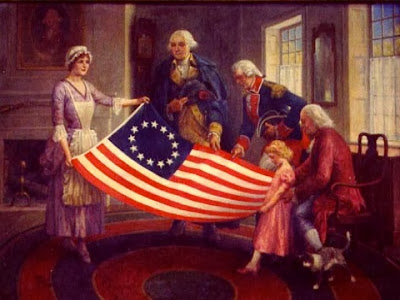 One of the most powerful countries in the world, both economically and politically, the United States of America (which is primary related to the sign of Gemini) was created out of 13 British colonies. Its independence began by signing of the Declaration of Independence from Great Britain on 4th July 1776. Even though this country has Ascendant in Scorpio, the ruler of Ascendant (Mars) is placed precisely in the sign of Gemini, in the first human sign, the sign of Mercury’s seat, thus making us think that it is precisely the axis of exaltation on Mercury (going precisely over 13°) that could be very significant for this country. At 13° Virgo (the exaltation of Mercury) we have a picture of a very intelligent man, the man who speaks and thinks, while for the degree of 13° Pisces (the fall of Mercury) we could say that this is the degree that knows “the biggest of secrets”. Isn’t it true that this country was created by the smart minds, which were members of the secret (masons’) organizations – the Sun (the essential significator for the rulers and here also the ruler of 10 – the rulers) at 13° Cancer in sextile/trine from 13° Virgo/13° Pisces!? 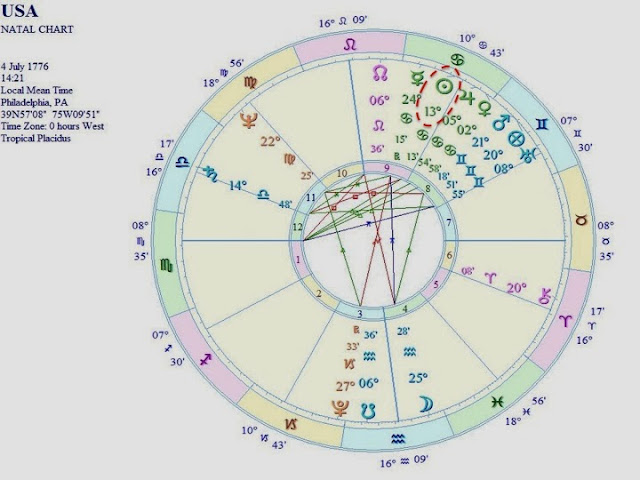 If we start from the very beginning, i.e. from the moment when the American Independence War started (18th April 1775), we see that in the secondary progressions, the cusp of the 10th house of George Washington (who fought for liberation from Great Britain and who was later to become the first President of the USA) was precisely at 12° Pisces 57’ (almost at 13° Pisces), which activateed the 13º Virgo/13º Pisces axis! 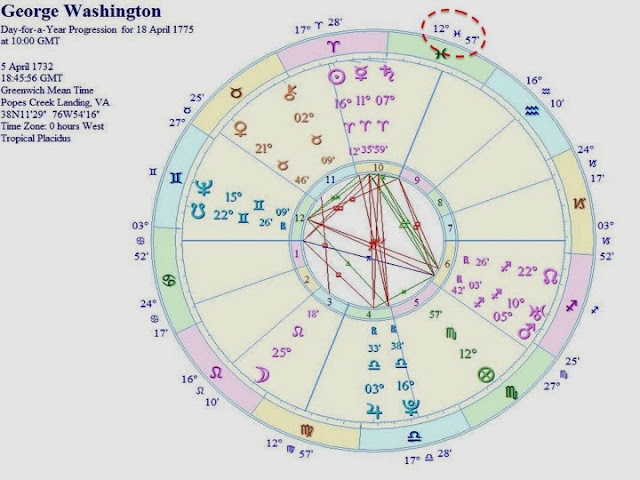 The Americans had won the War for Independence with the help of France. The Constitution of the United States of America (as the oldest one in the world) was adopted at the Constitutional Convention in Philadelphia, on 17th September 1789, by which the first modern democracy of the world was established. It was rather simple and one of the fundamental rights and freedoms, guaranteed by this legal act, was precisely the right and freedom of speech and expression (in the symbolism of Mercury).

The United States of America had, since then, started slowly to expand… However, on 12th April 1861, the American Civil War between the North and the South started, and this was the only war on the territory of this country ever since it was founded. At the time, the 13º Virgo/13º Pisces axis was activated and the directions (in which everything transits about 1° in 1 year). Namely, Mars in the directions (the ruler of Ascendant – circumstances in the country) was precisely then transiting the 13° Virgo axis! Also, the secondary progressions of George Washington carry a sign within, having in mind that the secondary 1/7 axis was precisely at that moment transiting the 13º Virgo/13º Pisces axis! 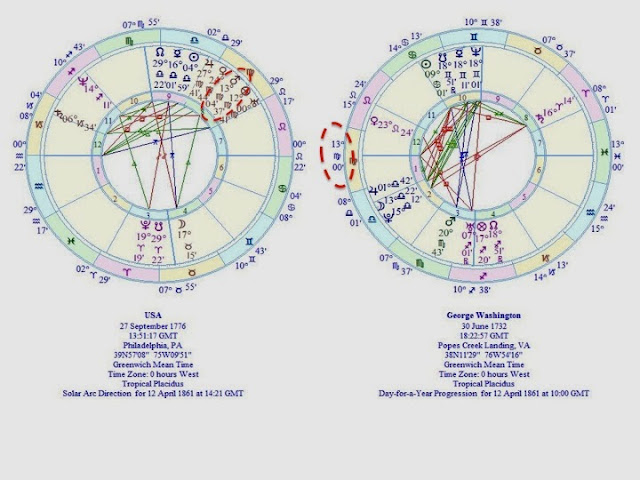 After the First World War and just before the Second World War broke out, the United States had a large-scale economic crises known as the “Great Depression”. The very day of the beginning of this crisis is taken to be 29th October 1929. This day is known as the “Black Tuesday”. The Sun in the progressions of this country was then at 13° Sagittarius, which made a square with the 13º Virgo/13º Pisces axis. All this was a picture of the problem (square) in which this country ended in! 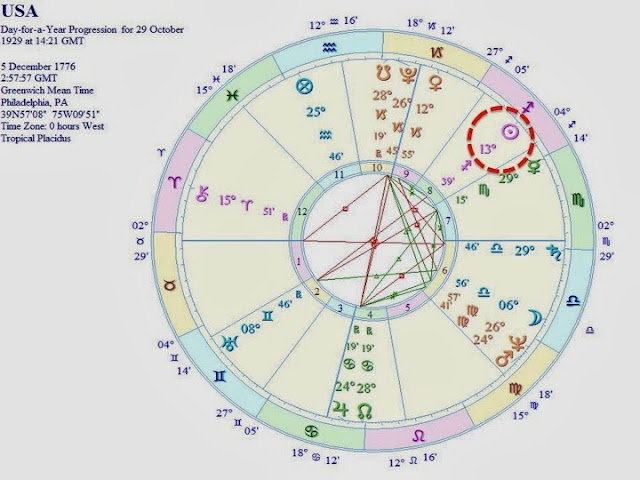 After the North-South war, which ended by the abolition of slavery, the next time when the United States got exposed to war dangers was on 7th December 1941, when the Pearl Harbor attack happened in Hawaii, meaning that the United States were to enter the Second World War. The secondary Moon (transiting about 1° in 1 month and always presenting the nation of one country) of the United States was then at 13° Pisces, while the tertiary Moon (transiting 1° in 2 days) of George Washington transited precisely 13° Virgo. Namely, this was another “awakening” of the 13º Virgo/13º Pisces axis! George Washington, as the first USA President, was an “extended hand” of the American nation, the man who lives in the collective consciousness and his progressions can still give us indicators even after his death… 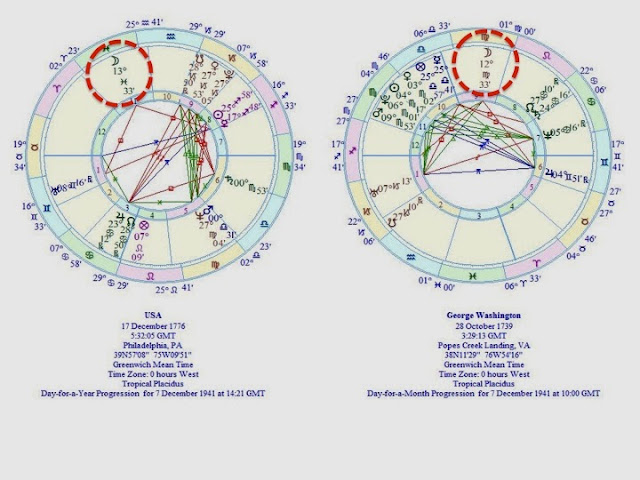 In the latest history, the United States of America, under the rule of George Bush, Jr., were exposed to a terrorist attack, on 11th September 2001, when the World Trade Center in New York was attacked, when the famous “Twin Towers” (in the symbolism of Mercury) were destroyed. After this, President Bush declared the War against Terrorism (on 20th March 2003), which has directly put the American nation in danger. Precisely in the chart of this man, the midpoint between the Moon (nation) and Pluto (war, danger) is at 13° Virgo, being again an “awakening” of the 13º Virgo/13º Pisces axis. 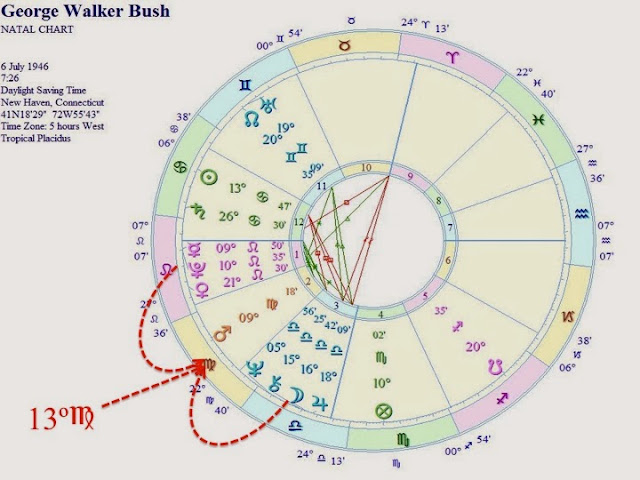 These are the days during which the United States have been deciding on the attack on Syria (which, amongst other things in its chart has the Moon – nation at 14° Pisces, while the secondary Mercury (carrying along the Mars-Uranus conjunction from 8 – war) is precisely at 13° Pisces. Mars is the ruler of 7 (international relations) in the chart of Syria, thus presenting here the very United States, whereas Uranus can be a picture of an attack from the air, an airplane… It is interesting that the decision will be made in the next few days, under the influence of the New Moon of 5th September 2013, which happened, accidentally, at 13° Virgo!!! To all of this I would add that the secondary axis 3/9 of the United States goes precisely over the 13º Virgo/13º Pisces axis, which is a picture of determination of this country to make a decision (3) related to abroad/foreign countries (9), while the very position of the Ascendant at 28° Cancer (the fall of Mars) can precisely be determination of the United States to start a war, at any and all costs, even unconsciously… It is even more interesting that during these days, the tertiary Moon (transiting 1° in 2 days) of the United States will be transiting over 13° Pisces! 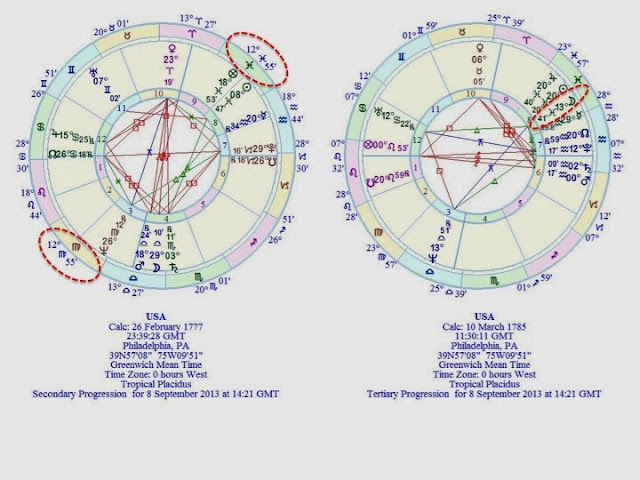 G20 Summit – the meeting of Obame and Putina 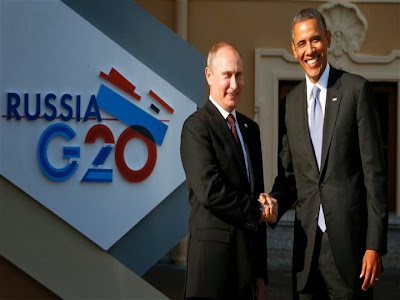 In the last few days in Russia, more precisely in Sankt Petersburg, a Summit is being held of the most developed countries and economies of the world – G20, to be attended by the most significant international leaders and where the question of an attack on Syria will be an important point on the Agenda. It is well known that Russia and its President Vladimir Putin do not support the position of the American President Barack Obama, who believes that an attack on Syria should take place, as there is evidence that the regime of Bashar-al-Assad has used chemical weapons. However, as I have said already, the Russian President is strongly opposed to this and he believes that the attack on Syria without the green light of the UN Security Council would be an act of aggression against the given country.

Also, I would say that the two Presidents can still somehow agree about this issue, having in mind that this year the Sun in the progressions (President) of Russia is at 13° Cancer, which is the degree of the natal Sun (President) in the United States’ chart, which will be making a sextile/trine to the 13º Virgo/13º Pisces axis – which is the axis significant for the United States. As this is also about the largest star in the sky, Sirius (at 13° Cancer), all this confirms the significance and greatness of their meeting at G20 Summit to the international security. This meeting of the two most significant leaders in the world could mean the beginning of “melting” of relations after the recent “Edward Snowden case”, as in the 13º Virgo/13º Pisces axis we can also see an axis telling the story about information (13° Virgo) related to secret services (13° Pisces).

I have already written that Russia could really balance the relations between the United States and its allies on one side and the Syria’s regime on the other, in my article of January this year – The East and the West = Aldebaran and Antares. 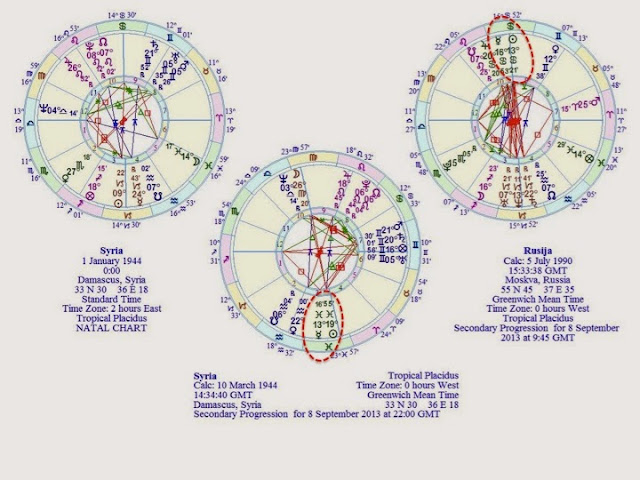 The fifth Uranus-Pluto square and activation of the Mercury chakra 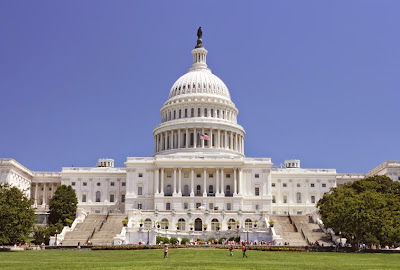 In the spring of 2014, more precisely, on 21st April, the fifth (out of the total of 7) squares of Uranus and Pluto will occur, which will activate the fifth throat (Mercury) chakra. At the planet Earth level, this energy center is precisely on the territory of the United States, which can really then be “called upon” as a Great Cardinal Cross will be formed in the sky over 13° and the Sun (President) of the USA chart will be “attacked”. Also, this Great Cardinal Cross will activate the cardinal houses of the natal chart of Syria!

However, as the 13º Virgo/13º Pisces axis is significant in this story, we may conclude that this axis will, at that moment, be supported by Jupiter from 13° Cancer, as well as Pluto from 13° Capricorn, by harmonic aspects. We know that Jupiter and Pluto are the planets that are related to the areas of finances, thus this can be the picture of good opportunities in this area.

On the other side, it is precisely then when the tertiary Mercury of the United States (transiting about 1° in 1 month) will be at 13° Pisces, which again confirms the activation of the 13º Virgo/13º Pisces axis, and as Mercury is the natal ruler of 8 (wars, conflicts, dangers) – we may, once more, conclude that the fifth Uranus-Pluto square could really get this country into a challenging period… 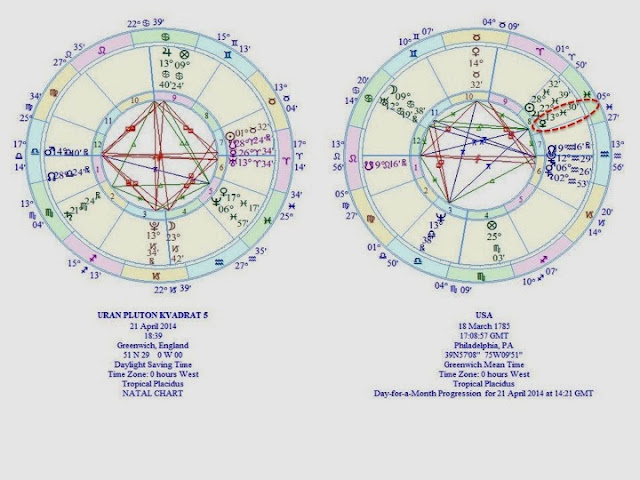 It is well known that the fifth chakra is in the throat area, thus it is here where “awakening” is to happen, first of ourselves and, then, of the others. It is here that we acknowledge, that we change… It remains to be seen in which direction will the events go… and whether somebody will change their positions and their opinions…