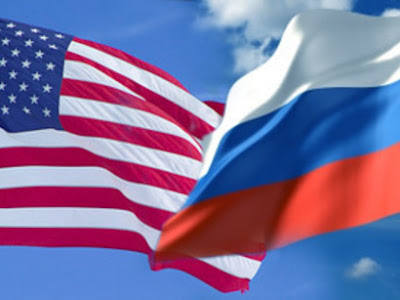 On Sunday, 3rd November 2013 (after the fourth Uranus-Pluto square of 1st November), the last eclipse of this year has occurred and this time it is a Solar eclipse (New Moon, i.e. the Sun-Moon conjunction near the North Lunar Node) at the degree of Uranus’ exaltation, at 11° Scorpio! The Solar eclipse is always a picture of a new beginning and, as it has included this time the North Node (the future), which makes the picture of a new beginning more complete. 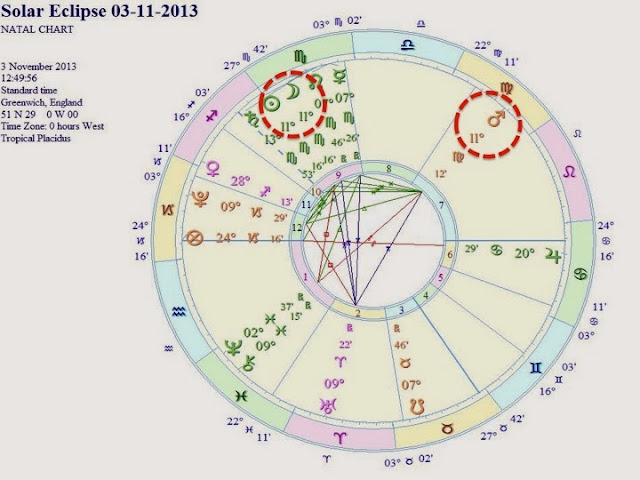 The dispositor of the eclipse is Mars, positioned at 11º Virgo from where it makes an exact sextile with the very eclipse at 11º Scorpio, but also an applicative sextile with Saturn at 13º Scorpio, meaning here that in time (Saturn) things may become quite stable (Saturn).

All this becomes much more interesting if I tell you that, at 11º Virgo, there is a prenatal eclipse of the American President Barack Obama, which was at that time a Lunar one and thus speaks about the person here (i.e. Barack Obama) having to finish some things from before, but which also defines his state of consciousness through the degree of trust or fear. 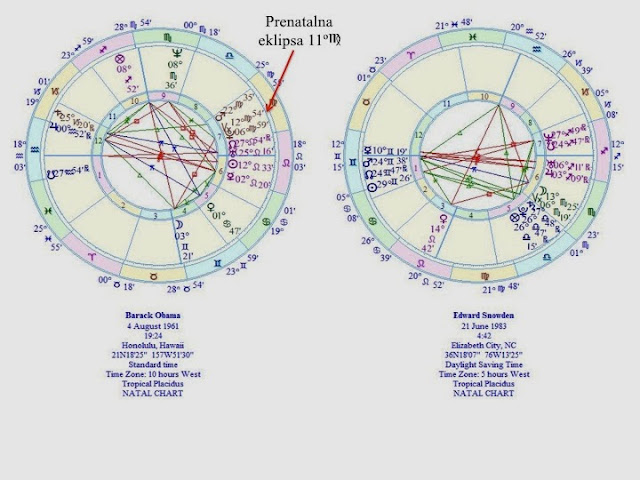 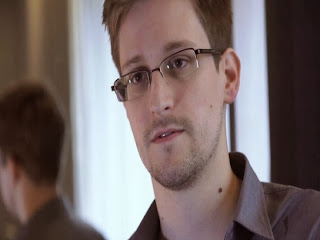 On the other side, precisely at 13º Scorpio is the Moon (the ruler of 3 – information) of Edward Snowden, a runaway former official of the American National Security Agency (NSA), to whom Russia has recently offered an asylum and which makes a beautiful sextile – trine to 13º Virgo -13º Pisces axis (the axis which is rather significant for the United States, as I have written some time ago in my Article “USA and 13º Virgo -13º Pisces axis”), but also a great trine to the Sun itself (the President, the rulers) of the United States at 13º Cancer!
I would like to add that Edward has the midpoint of Mercury (the ruler of 1 – himself) and Venus (the ruler of 12 – secret, his personal Neptune) at 12º Cancer 30’ (almost 13º Cancer), thus we can suspect that this young man really knows a secret, related to the rulers in his country… However, no bigger problems should be here, as all aspects there are harmonic aspects, which are also “lazy”, thus often do not mean any action. Also, this is an opportunity to easily resolve the “problems” here…

Should President Obama work on faith and whether, related to the “Edward Snowden case” somehow get relaxed more, analyze less and have more faith above all (as Virgo, where his prenatal eclipse is, is the sign of the seat and exaltation of Mercury, which is why he likes to analyze and is not infrequently untrusting, as, at the same time, this is the place of Jupiter’s exile – optimism and Neptune – personal faith)? I would say that the answer is – yes… However, this prenatal eclipse of Barack Obama from 11º Virgo would not be so important here if it was not for its making a beautiful trine – sextile at 11º Taurus -11º Scorpio, which is the axis of joint chart of the United States and Russia! Also, we cannot neglect that the current President of Russia, Vladimir Putin, has in its chart Venus (an essential significator of diplomacy) also at 11º Scorpio..., as well as that the current State Secretary of the USA, John Kerry, in charge precisely for international relations at the Obama’s Administration, has the midpoint of the Sun (the rulers, reputation) and Neptune (secret) also at 11º Scorpio! 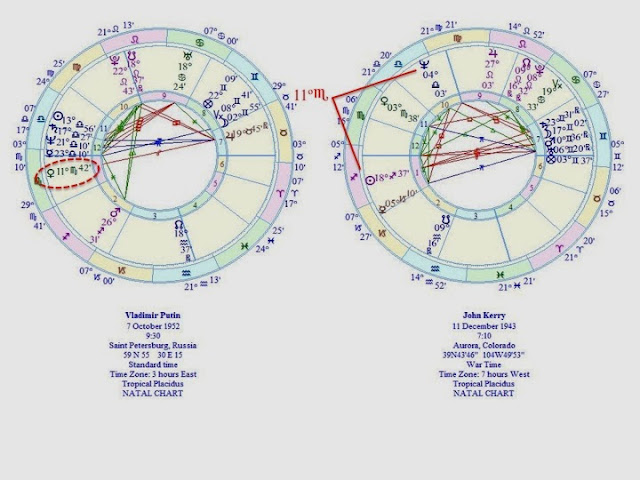 Davison’s Chart of the USA and Russia

Precisely, as there is a joint chart between any two persons that realize some form of a relationship, there is also a joint chart of two countries. In this text, I believe you already suspect, I will talk about the joint horoscope (the so-called Davison’s chart) of the two most important (both politically and economically) countries in the world. Of course, these are the United States of America and Russia. Why am I dealing, precisely at this moment, with relationship between these two countries? Because the axis of 1 (the United States) – 7 (Russia) of this Davison’s chart goes precisely over 11º Taurus -11º Scorpio, meaning that this axis has “awoken” by the eclipse of 3rd November 2013.
However, if we do a chart for the moment when Jupiter entered the sign of Cancer (26th June 2013), we can also see in this chart the Moon at 11º Aquarius making a square towards the axis 11º Taurus – 11º Scorpio, which is already implying a possibility that there could be a problem in diplomatic relations between these two countries. Precisely at the end of June, immediately after Jupiter entered the sign of Cancer, a diplomatic “incident” occurred between the United States and Russia, as the runaway Snowden (who left the territory of the USA on 20th May 2013, on the date of the third Uranus-Pluto square) landed on the territory of Russia, coming from Hong Kong. 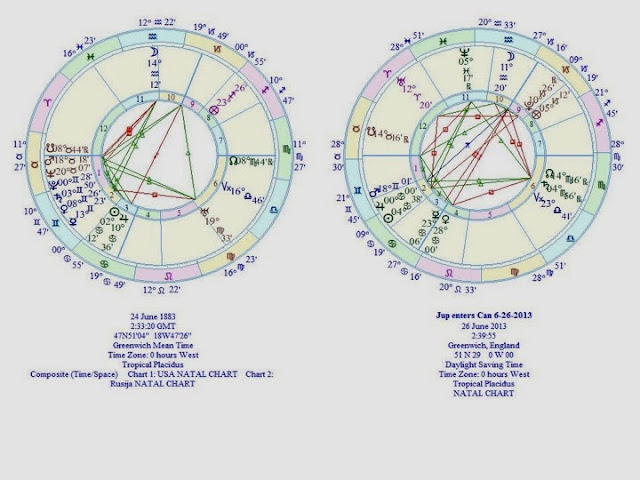 The United States are, of course, looked at (as the older country between the two) through the 1st field, which is at the degree of Uranus’s fall, whereas Russia would then be presented by the degree of Uranus’s exaltation - 11º Scorpio. Namely, from the nature of all the degrees, we may recognize the affection of Moscow towards the official Beijing, as the very Beijing was related, in one of my texts, to 11º Scorpio („Beijing and 11º Scorpio), while, on the other side, the official Washington is here presented with 11º Taurus, which is the degree I “connected” to Tokyo („Tokyo and 11º Taurus“). It seems that the relationship between Beijing – Tokyo is being reflected through the relationship between Moscow – Washington, which also, observed through the eyes of an ordinary observer, who is not an astrologer, makes sense.

Natal charts of the USA and Russia 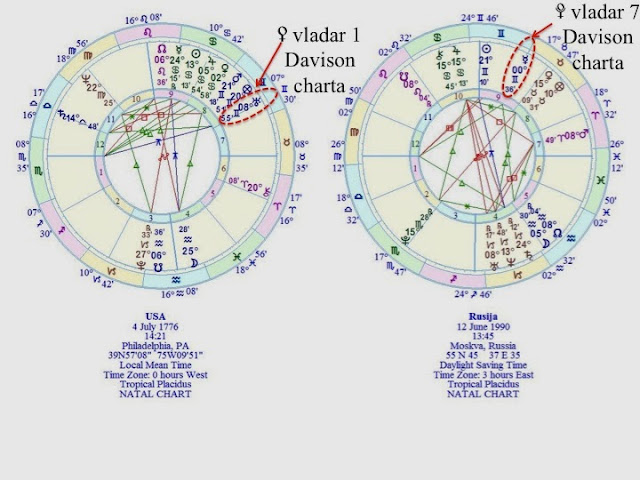 However, what after Syria still remains to be is the “case of Edward Snowden”, who was “hosted” by Russia, hence seriously “offending” the United States. There are even some hints that the American sportsmen will boycott the upcoming Winter Olympics in Sochi, on 7th February 2014, precisely because of the “Snowden case”. However, I would say that the things do not have to move in this direction, as precisely on the day of opening the Olympics, the transit (retrograde) Jupiter will be at 11º Cancer (where it is also placed in the Davison’s chart of these two countries) and it will support both the axis 1-7 of Davison’s as well as the very prenatal eclipse of the American President Obama from 11º Virgo with a sextile.

However, a much more interesting moment will occur at the time of the fifth Uranus-Pluto square of 21st April 2014, which will be happening over 13º degree of cardinal signs, more precisely speaking, a Great Easter Cardinal Cross will be formed in the sky over 13º degrees of cardinal signs, which will activate 13º Cancer (the Sun of the United States), but also the aforementioned midpoint of Mercury and Venus of Snowden (him and the secret), as well as the Sun at 13º Pluto of Vladimir Putin! 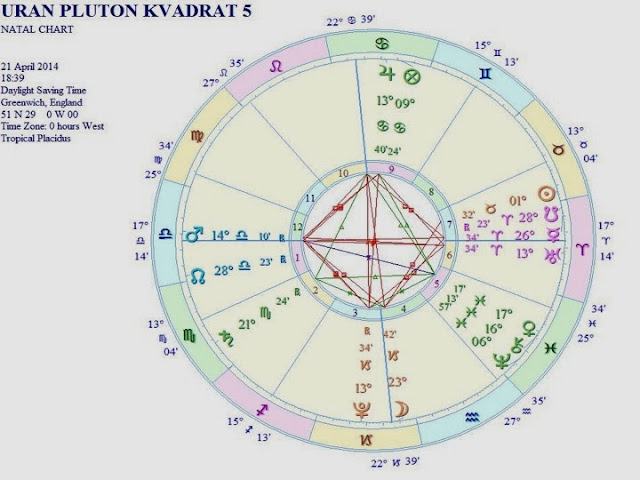 The midpoint in Davison’s chart at 13º Aries

Also, at 13º Aries in the Davison’s chart is the midpoint of the Moon (the ruler of 3 – information) and Mercury (the ruler of 6 – employee, official), thus all those information that Edward Snowden has, as a former NSA employee could somehow be activated with this square. Namely, precisely then will the tertiary Mercury (which is the ruler of Ascendant) of Edward Snowden be at 10º Virgo 36’ (within the permitted orb of +/- 30’), that is, almost at 11º Virgo, at the place of the very prenatal eclipse of Barack Obama, which could “activate” to the American President some past-life memory related to these relations, as well as to “wake” trust, rather than fear… However, as the dispositor of his eclipse is Mercury, which is going towards the opposition of Jupiter – Saturn by conjunction and to the square with Neptune, which is at the center of this T-square, I would say that Obama will need a lot of personal silence and inner faith to set himself free from fears and suspicions… Still, it forms from 11º Virgo a beautiful trine-sextile at 11º Taurus (the United States) – 11º Scorpio (Russia), thus somehow making this “Edward Snowden case” an opportunity for these two countries to reconcile… 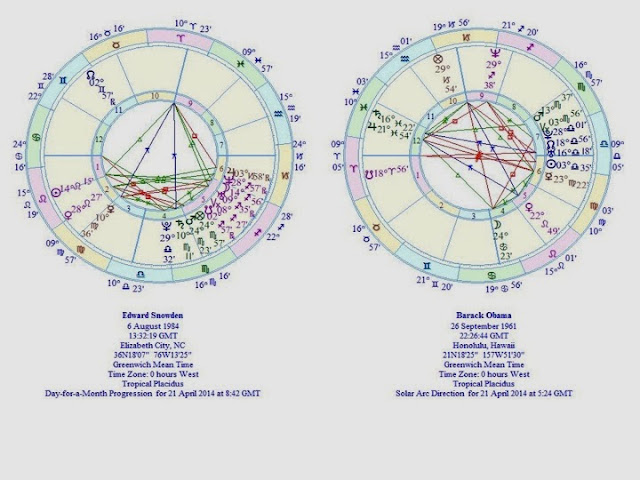 On the other side, Mars in the directions (transiting 1° in about a year) of Obama (the ruler of his 10 – him as President) will be at 13°Scorpio (which is the place of Edward’s Moon – the ruler of 3 – information), which is the picture of President Obama with the information of Edward Snowden… Isn’t all this still an opportunity to overcome this “problem” with ease!? At the same time, the tertiary Ascendant (transiting about 1° in about a month) of Edward will come at 24° of Cancer, where the Moon (nation) in the directions of Obama will be and also at the same place where Mercury of the United States is (the essential significator for information) which carries Neptune here (secret) from the 11th house (the Internet). It is well known that the United States are being “referred to” about the so-called “internet espionage”… Also, an interesting fact is that at 23° Cancer (namely, quite close to 24° Cancer) there is the postnatal eclipse (the purpose, the mission…) of the United States, which was a Solar one at the time… 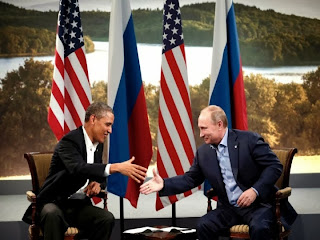 At this degree, the United States have the ruler of Ascendant, which, in other words, present Washington D.C. itself, and circumstances in the country. At this very degree is the Sun in Russia’s chart (President) in conjunction with the very degree of 10 (the power, President). It is important here that this degree will be activated on the date of the fifth Uranus-Pluto square (21st April 2014), through the Moon in the directions of the Davison’s chart, which still leads to a conclusion that these two countries are somehow – one! Also, I would like to add that Russia’s Sun in the progressions (President) is at 13° Cancer, in conjunction wit the Sun (President) of the United States, as well as that, at the time of the fifth Uranus-Pluto square, the progressive Sun of Russia will still be at 13° Cancer. Isn’t all this, still, a picture of the two Presidents who will, as I have already explained before, be – one, and that these two countries will not jeopardize each other? 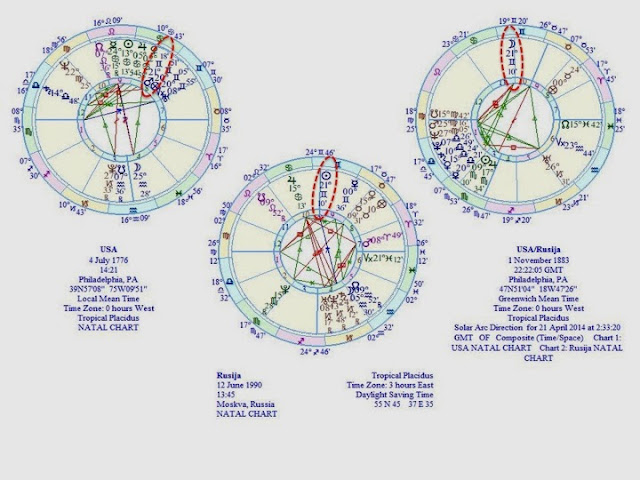 As this square will activate the fifth, throat, chakra, the chakra of Mercury, it is very desirable here to change the positions and convictions, as that is the only way for the circumstances to change as well. This creates an opportunity for “awakening” to happen… Edward Snowden is not here just a passer-by, as nothing in our lives happens by accident, he is someone who can help Barack Obama to resolve some of his past-life experience in a different way now, above all, led by faith instead of doubts and fears, which could, of course, as a result have improvement of the relationship between Washington – Moscow… Finally, the very President Putin has stated on several occasions that he will not allow Edward Snowden (as long as he resides on the territory of Russia) to make any “secret data” public, which could jeopardize the United States…