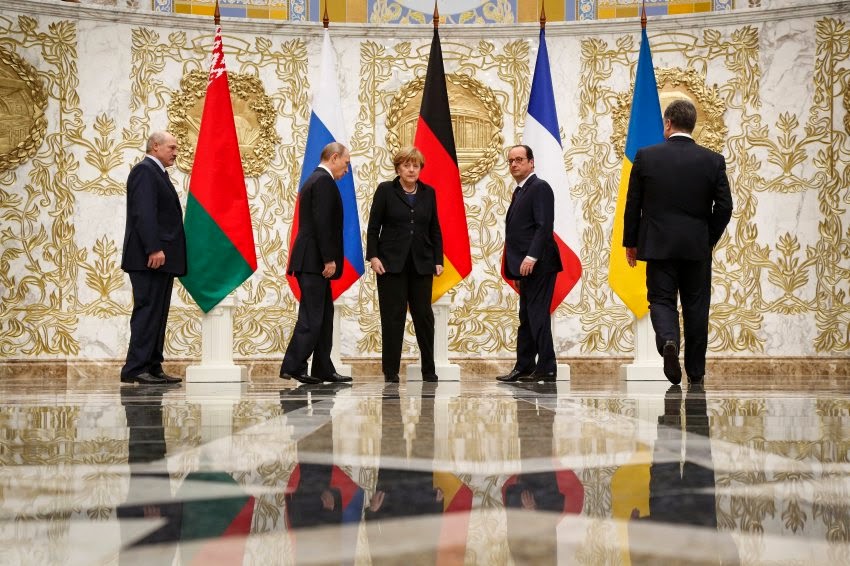 New Moon is always a symbol of a possible new beginning! Almost a month ago, on 20th January 2015, when I was looking at the horoscope for that moment (New Moon on 0ºAquarius), calculated for Greenwich (because it is the global picture, the picture for the whole world), the first thing which caught my eye, as mundane astrologer, was: 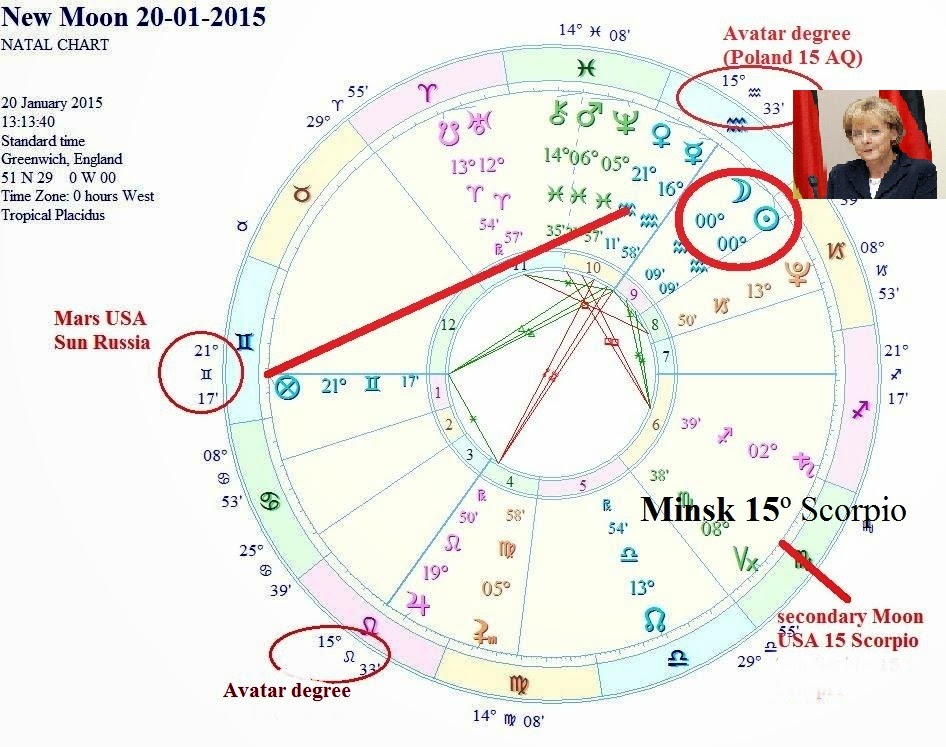 - Axis IC-MC was on the so called "Avatar degrees", ie.  15º Leo / 15º Aquarius what certainly highlights the period of tensions on the mundane level. Otherwise, at 15º Aquarius German Chancellor Angela Merkel has in her natal chart the Moon (the German nation), but this is also the degree which I link to Poland (more about this you can read in my article "Poland and 15 º Aquarius").

- In support of this I add that it is precisely at this time that a secondary Moon  (moves around 1° for 1 month) of the United States was positioned exactly on 15º Scorpio ("Avatar degree") and squaring above mentioned axis IC-MC of the horoscope of the New Moon. Moon in the chart of USA is the ruler of 9th house (abroad). Square is always a picture of some kind of problem, and that things will not be easy.

- Tertiary axis 1/7 of the United States (Washington, DC, and anyone who stands across-diplomatic relations) was on 21º Leo / 21º Aquarius, which is the natal axis MC-IC of Vladimir Putin, the Russian president’s Natal Chart. And also, the axis 21º Aquarius / 21º Leo is  axis 1/7 of horoscope of Ukraine!

Otherwise, I am one of those (rare) astrologers  who  use  this Asc of  Ukraine - degree of Neptune’s exaltation - 21º Aquarius, and due to this research I have also received confirmation that this degree really „works“!!!

What has happened in the meantime? 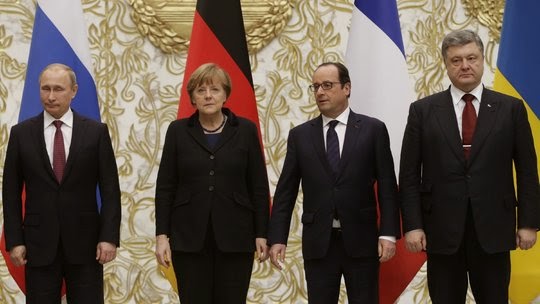 In the capital of Belarus, Minsk, leaders of the two warring sides, Vladimir Putin and Peter Porošenko, met in order to achieve the ceasefire agreement and ceasefire in eastern Ukraine. Mediators were German Chancellor Angela Merkel and French President Francois Hollande. The meeting was hosted  by Belarusian President Alexander Lukashenko. Ceasefire agreement was signed on 12th February 2015, however, this conflict is still ongoing. Otherwise, Minsk hosted the negotiations of the warring sides since September 2014.

I looked at the horoscope of Minsk, capital of Belarus, where all this was happening. The first thing that caught my eye was the position of Moon (people) on the so-called "Avatar degree", the 15° Scorpio! In that place there is a secondary Moon (ruler of 9th - abroad) of  USA! The United States is still kept on the sidelines in this conflict, but this is a clear  picture of their indirect "presence" at this meeting. On 15° Scorpio is currently located secondary Ascendant of Minsk too, which only emphasizes the importance of this degree for Belarus! 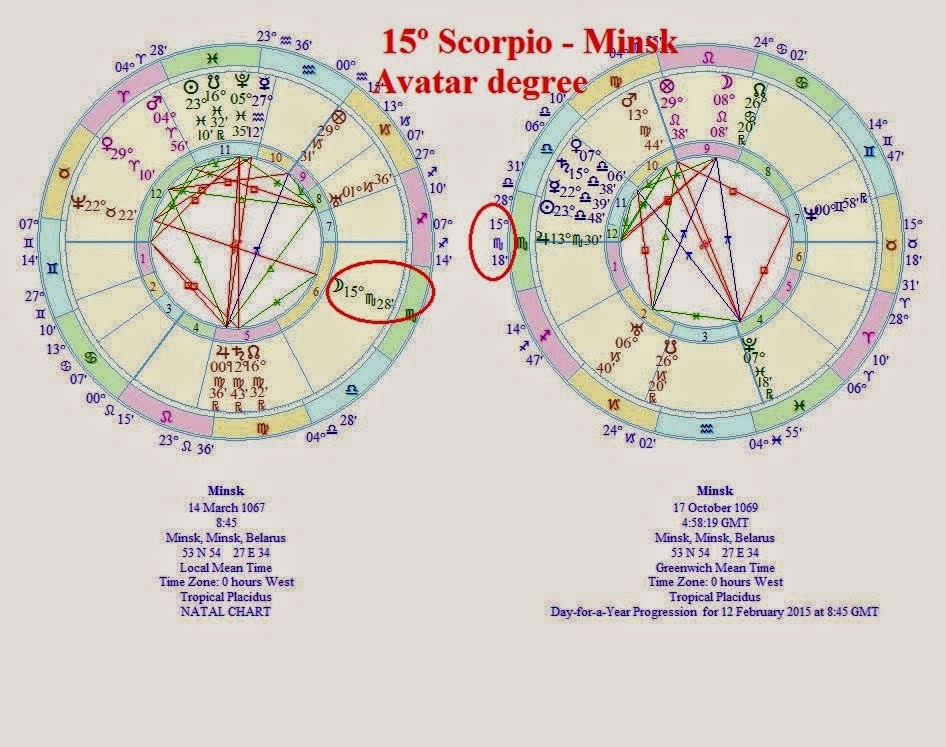 Belarus is a former Soviet republic, which has a central (15° - the central, „royal“ degree)  importance of the Commonwealth of Independent States. For it was Minsk, the capital of Belarus, the seat of the CIS. This community was created on 8th December 1991. Intresting is, that the axis Ascendant / Descendant for that  moment is around the axis of 15º Taurus / 15º Scorpio, the so-called axis of "Avatar degree"! 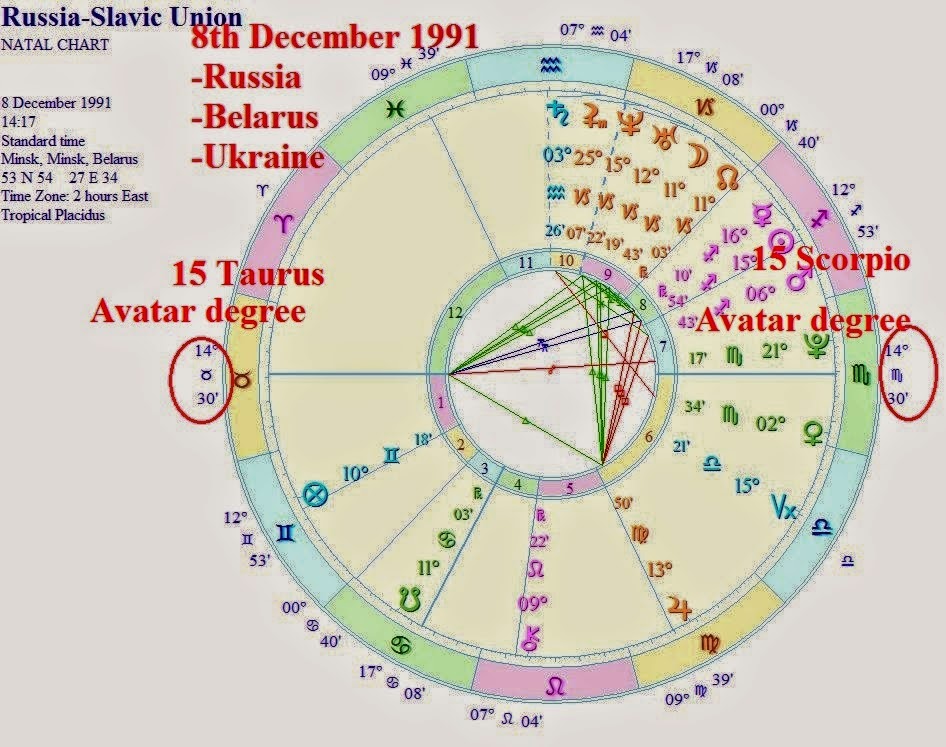 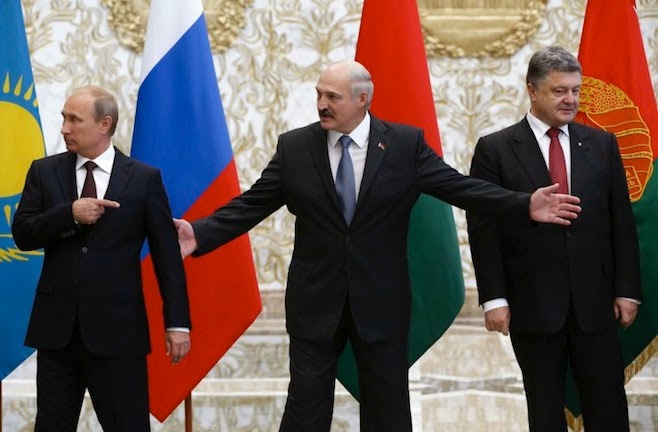 Also intersting is, that  this Community was initiated just by the presidents of the former Soviet republics: Russia, Belarus and Ukraine, antagonists today, and one of them was the host of the meeting in Minsk! Later on, other former Soviet states became part of the CIS, and in the meantime some of them left it - Georgia, Ukraine...

Let us now take a look at the  horoscope of communist Belarus. Ascendant is in Libra, and if we do now secondary progression for the moment when Belarus became an independent state -  25th August, 1991, we find the ruler of the Ascendant, Venus, just on 14° Scorpio 22 ', therefore, very close to the central, 15º Scorpio ("Avatar degree")! 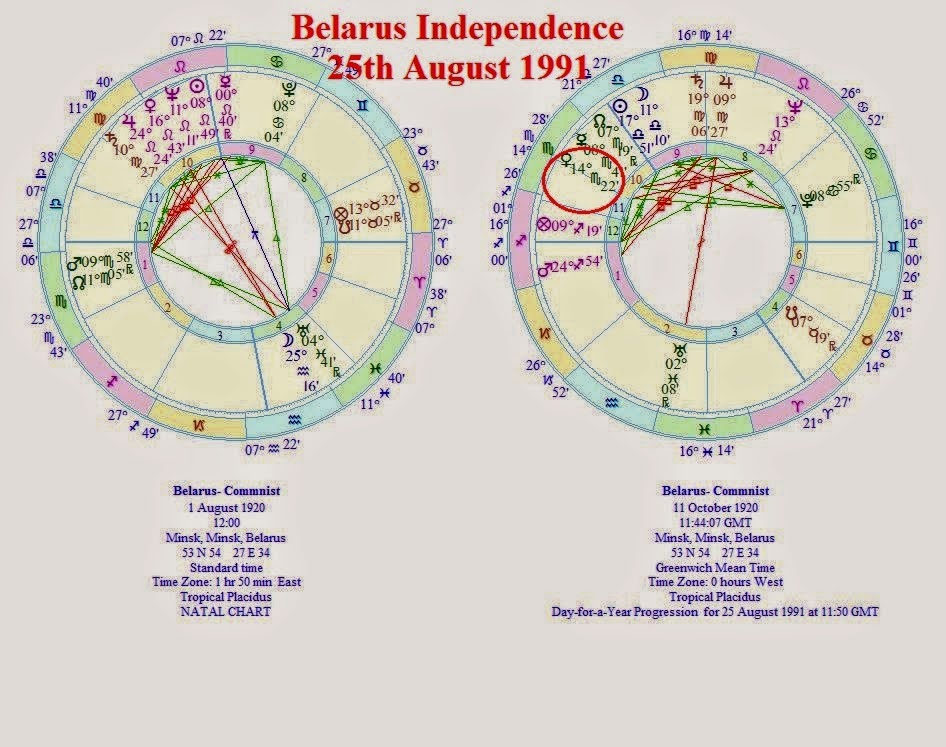 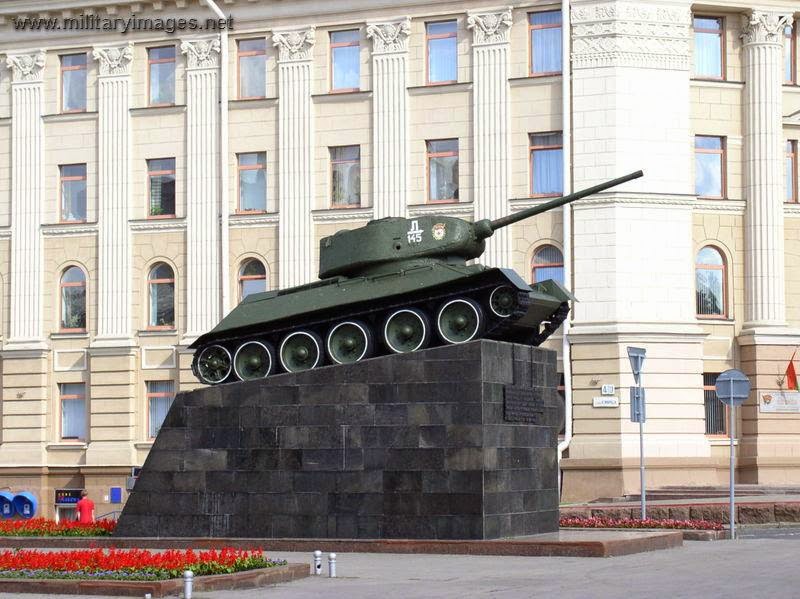 If we now turn to the history of Minsk, then we can find that this city has suffered enormous damage. As many as 10 times throughout history it has been attacked by many nations and rulers - by  Napoleon, and all over by Poland  and Hitler's Germany ... All of this links to the nature of the sign of Scorpio, which is like the Phoenix - arises from the ashes. On the other hand, the central, 15° of fixed Scorpio gives it a special "weight" and not so easy story. Let me remind you that Belarus is on a "blacklist" of the West due to the authoritarian rulership of President Alexander Lukashenko, who rules this country for 20 years, since 1994. Amendments to the Constitution provided that the same person can many times be reelected for the head of the state.

The role of Poland 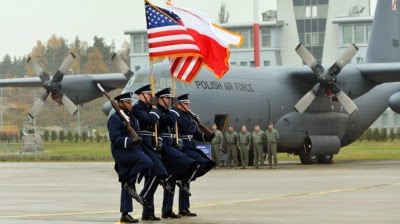 In his book, "Horoscopes of Europe", astrologer Marc Penfield says: "Minsk is the largest city between Moscow and Warsaw". This sentence led me to the conclusion that Poland here could have a major role, because  the MC of the New Moon  from 20th January 2015 was on 15º Aquarius (which is the degree which I link to Poland - "Poland and 15º Aquarius"). But, as the Moon of Angela Merkel is on  15° Aquarius, and makes a square to 15º Scorpio (Minsk) - it is not surprising that even after the ceasefire was signed the conflict in Eastern Ukraine still continues. Square never leads to realization, and things break halfway.

In my view, the negotiations should be moved perhaps to Warsaw, because, together with Angela Merkel, Poland could, in this Russian-Ukrainian conflict, somehow become important, whether directly or indirectly, remains open... On the other hand, the square "pulls", so that things happen just in Minsk, and not somewhere else, what has its meaning and purpose... because it is about some past life actions which were unfinished before, actions between the German, Polish and the Belarusian nations.We must also keep in mind that Poland is important as NATO base, which increases its role in this conflict.

About the central role of Germany, and therefore the German nation, in the times to come, I’ve already written in my article "Berlin axis and 20 ° Aries - 20ºLibra ".

It will be interesting to follow the next eclipses, because they will „touch“ Great Fixed Cross over 15º, so-called "Avatar degree", which will certainly reflect on Belarus, Poland, Germany...