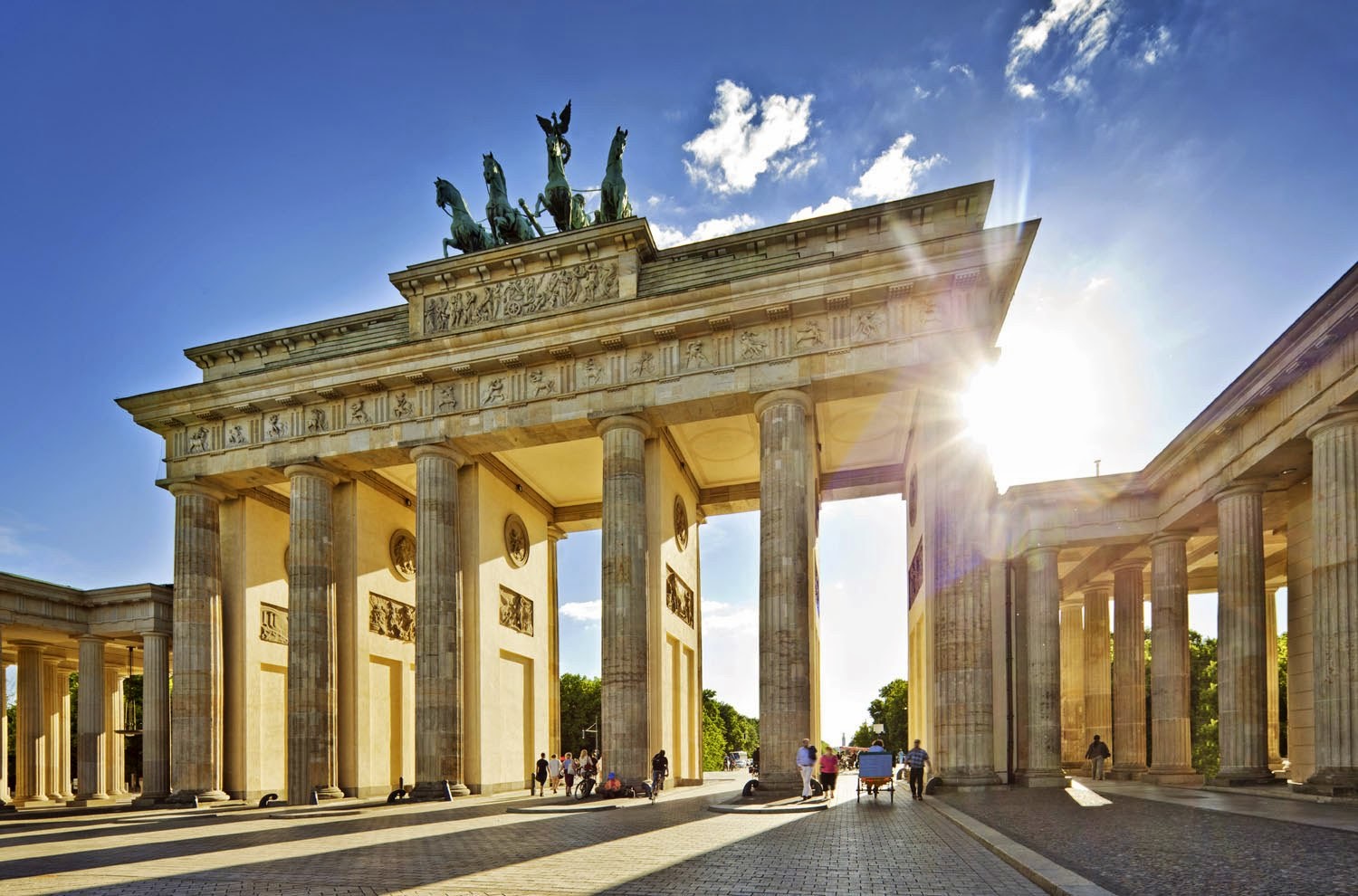 Today, the most influential EU member country, the fourth economy of the world (immediately after the USA, China and Japan) is the country which started World War II – Germany, is traditionally linked to the first zodiac sign, the sign of Aries, the sign where Mars (war) is domicile. However, as Mars is exalted in Capricorn, the sign where Saturn (borders, restrictions, walls, culture, people of other skin color…) are domicile, it seems that the axis of the fall and exaltation of Saturn, 20° Aries – 20° Libra could be rather significant for this country, more precisely, its capital – Berlin. 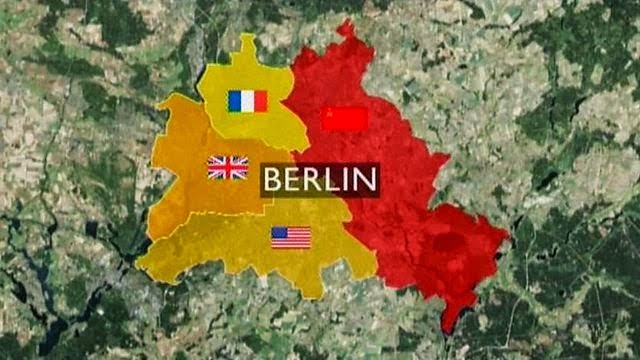 20° Aries – 20° Libra axis in the horoscope of Germany goes through 12 (secret services, camps, closed-type institutions…) and 6 (lower layers of the population, working class, healthcare, army…). The degree of Saturn’s fall (20° Aries) would be the picture of Germany, as a country know for its most repressive secret police forces in the world (Gestapo during the Hitler’s Nazi Germany and Stazi – East German secret police during the Cold War), which implemented the most horrific actions against the Jews, Roma, political opponents… Also, at 20° Aries, we have a picture of East (Aries – East) Berlin, which was under the influence of the Soviet Block and central economy during the Cold War period. Here we have a picture of people who are in some form of a ‘fall’ because of the system, state (Saturn). Namely, it is well known that human rights and freedoms in Eastern Germany were at a very low level. On the other side, across from it, at 20° Libra (West) is the degree of Saturn’s exaltation, thus, this is also the picture of Western Berlin, where the system is much more advanced, based on Western market economy. At 20° Libra we have a picture of exaltation of justice, a picture of democracy, which is why the rights and freedoms here are guaranteed. Western Germany was the symbol of political freedoms and economic prosperity and this is why it was attractive for the citizens of the Eastern Germany. The sixth house in the horoscope of any country presents its working class, which is why one of the basic reasons for making of the Cold War symbol, the Berlin Wall, is precisely – prevention of outflow of the working class from the Eastern to Western Germany. Today, Germany remains the country that offers business safety and high degree of health protection. 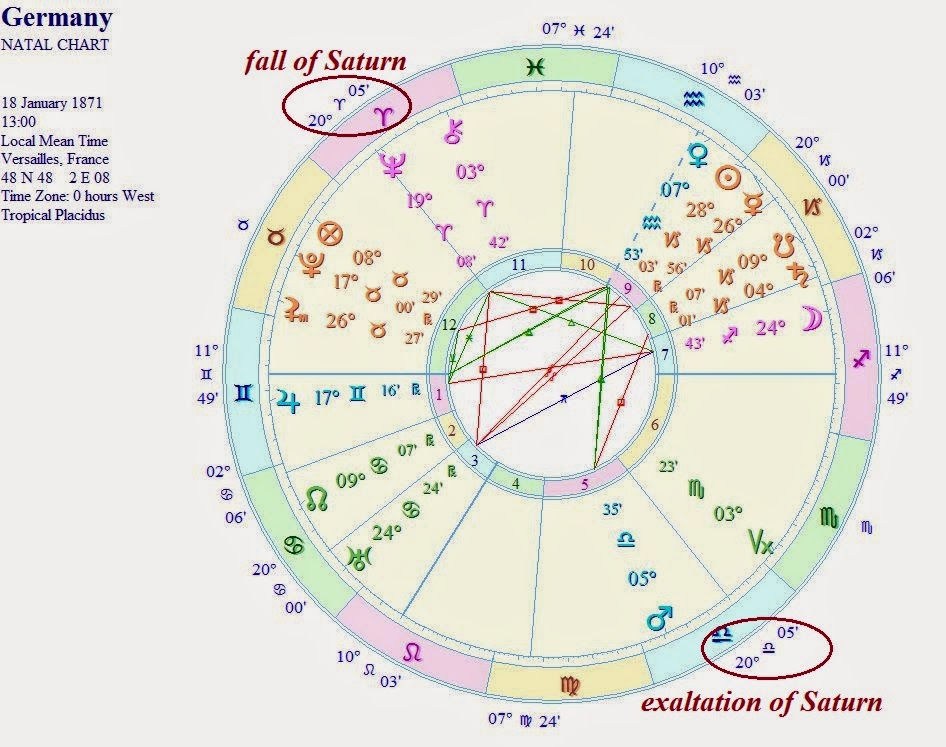 The Olympics in Berlin in 1936 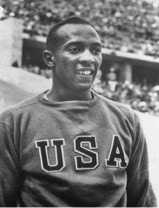 The eleventh Summer Olympic Games were held in Berlin in 1936. Berlin was selected as a host country in 1931, at the time of Weimar Republic, as the center of European multi-culture. However, in 1933, the Third Reich was established, the Nazis abolish the Republic and the German Nazis take over (20° Aries – Saturn’s fall). However, during the Olympics, the Nazis did make a concession and temporarily suspended the anti-Semitic laws, releasing the games participants from the obligation to respect the law prohibiting homosexuals. These games remain to be remembered by the famous Afro-American, athlete Jessie Owens, who became the start winning as many as four gold medals, thus giving a huge slap to the whole Nazi philosophy, which fits into the degree of Saturn’s exaltation (a black person), 20° Libra! There is a story that Adolf Hitler pointedly left the grandstands, as he did not want him to be awarded medals because of his black (Saturn) skin color.

If we start from the fact that Germany is the country which initiated World War II, it is interesting them that the axis in the directions (going for 1° in 1 year, as everything in the directions) of 1-7 (opportunities in the country, the capital Berlin – everyone standing across, diplomatic relations) was going precisely during that year over the 20° Leo – 20°Aquarius axis, making harmonic aspects to 20° Aries – 20° Libra axis, the axis which, most certainly, in the Zodiac presents Berlin. This is the picture of Germany getting into the war with ease (harmonic aspects). 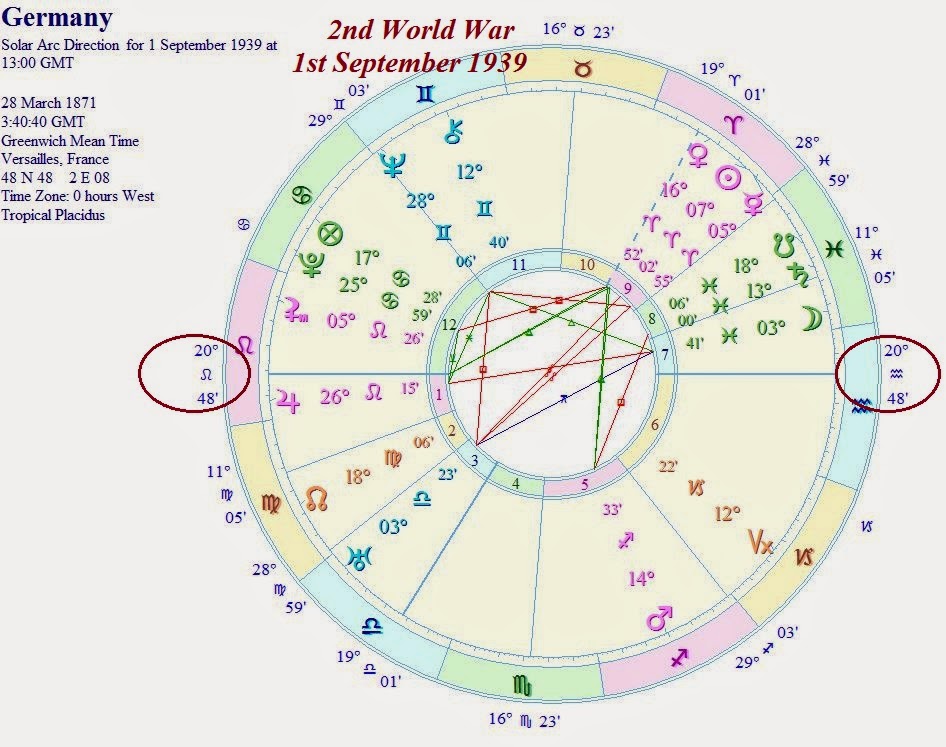 After World War II, Berlin, as well as the rest of Germany, was divided into four sectors and it was surrounded from all sides by the Soviet sector. The Soviet Union, United States, Great Britain and France controlled each their respective parts of Berlin. The Soviet Union was by far the largest. The three sectors, controlled by the USA, Britain and France – the so-called Western Berlin, even though officially and still under the sovereignty of the alliance, in 1949, have become a part of Western Germany, completely surrounded by Eastern Germany. In the beginning, citizens of Berlin were allowed to freely move between the sectors. Also, as the Cold War progressed, the free flow was all the more restrictive. The border between Eastern and Western Germany was closed in 1952, however, it only remained open in Berlin. About two and a half million Germans from the Eastern sector crossed to the West, between 1949 and 1952. A great number of professionals in all areas were moving to the West. One day, a whole Department of Mathematics of the University of Leipzig moved across.

One of the first great international crisis of the Cold War and the first such, which led to victims, was the so-called Berlin Blockade, on 24th June 1948. It lasted for almost a year, until 11th May 1949. If we look at the secondary progressions of Germany for this moment, we find that the secondary Moon – people (moving by 1° in one month) was positioned precisely at 20° Libra, which, of course, automatically ‘called in’ the 20° Libra – 20° Aries axis! The result of Berlin Blockade was the creation of the Berlin Air Lift. 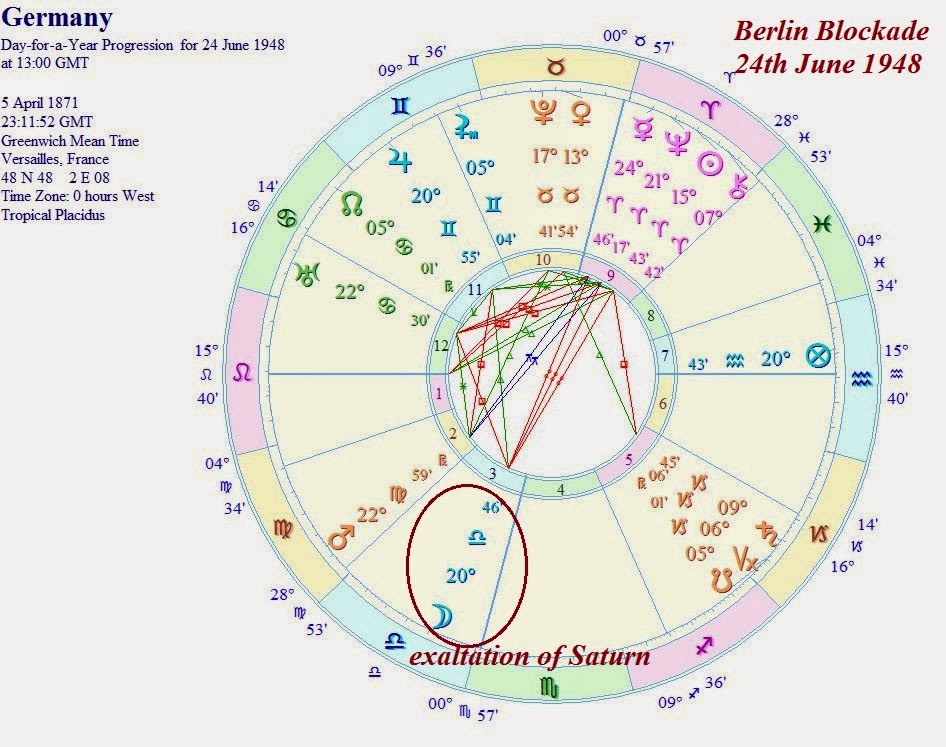 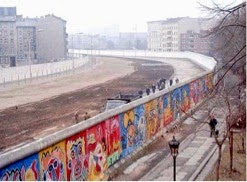 Idea about the construction of the Wall came from the East German Government of Walter Ulbricht, which was approved by the then Soviet leader – Nikita Hruščov. As described above, the Wall was to prevent movement of working class from the East to the West Berlin. The construction of 45 kilometers barrier about the three Western sectors started on a Sunday, 13th August 1961, in the East Berlin. The barrier was constructed by the East-German solders and workers (series 6). Thus, barbed wires were lifted and they were later replaced by a real wall. Many families were thus suddenly separated and the population was cut off from their jobs and changes for financial prosperity. West Berlin had become an isolated enclave on the enemy’s territory. The whole length of the border, between the East and West Germany, was closed with walls, mine fields and other obstacles.

Let us look at the position of the secondary Moon – people (moving by 1° in 1 month) of Germany for the moment when the construction of the Berlin Wall was started. We notice that it is precisely the axis of 20° Aries, which again ‘calls in’ the axis 20° Aries – 20° Libra! This is also the picture of the people in some form of a ‘fall’, which was the aim of the wall construction… 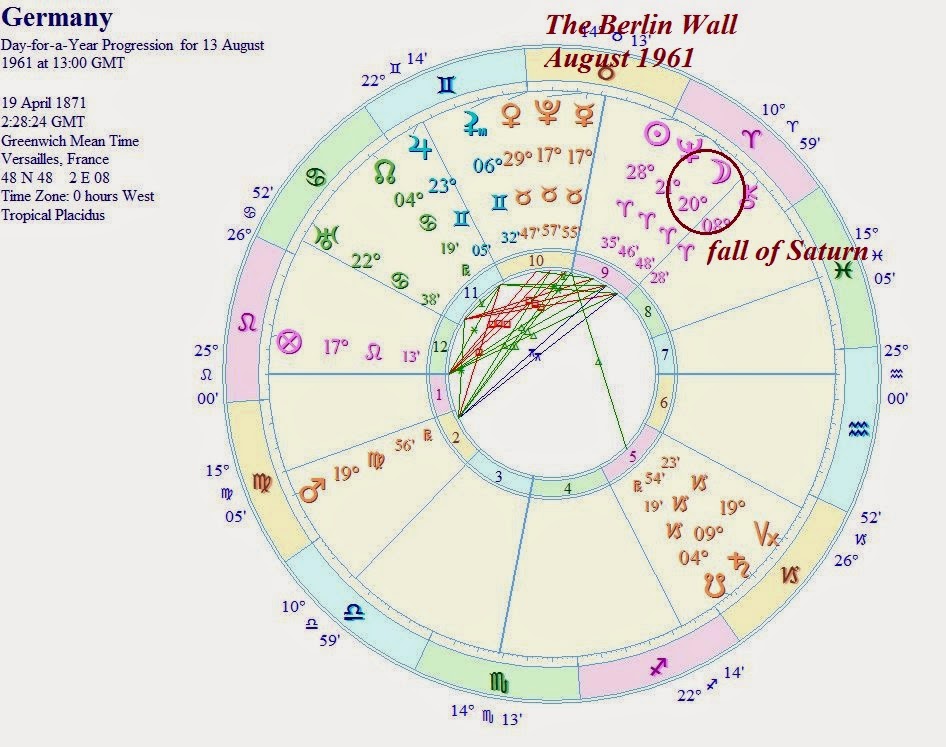 Let us look back to the secondary (moving by 1° in 1 year) 3-9 axis (neighbors – the abroad) of the horoscope of the Bolshevik Russia (7th November 1917, 10:00, Petrograd, Russia, Asc 26° Scorpio) for 13th August 1961, having in mind that the USSR had an indirect relation with the creation of the Berlin Wall. We find that this axis goes precisely at 20° Libra – 20° Aries, which is the axis that, inside the Zodiac, pictures Berlin! To all this I add the natal position of the Moon (Russian people) at 20° Leo from the chart of the Bolshevik Russia, which also supports the 20° Aries – 20° Libra axis (Berlin), which finally paints the picture of Russian ‘involvement’ in the construction of the Berlin Wall. 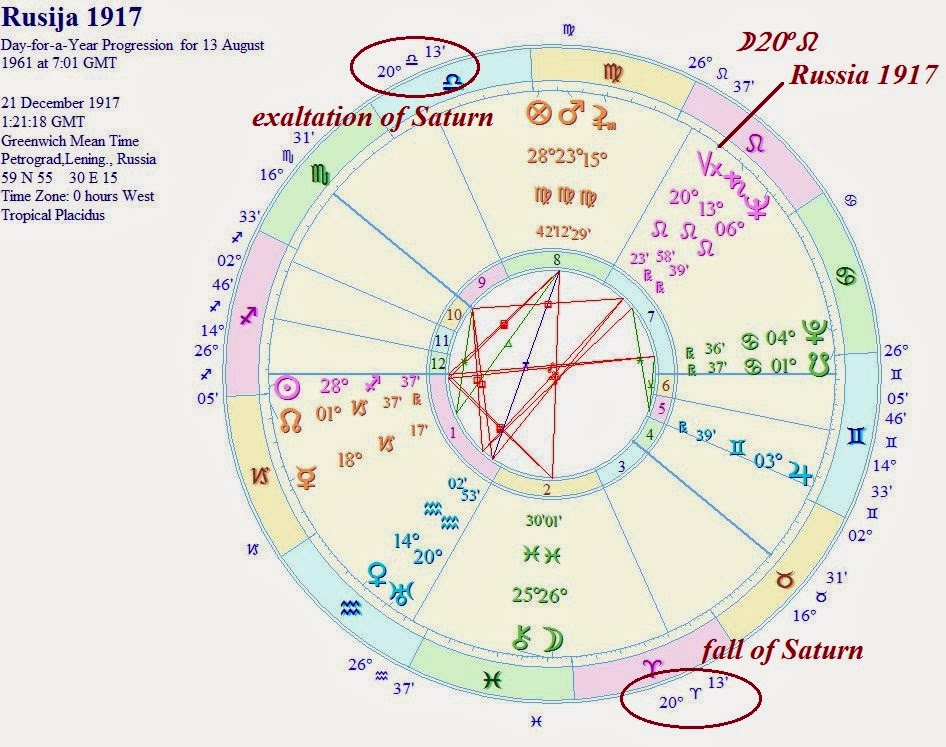 „Tear down this wall“ 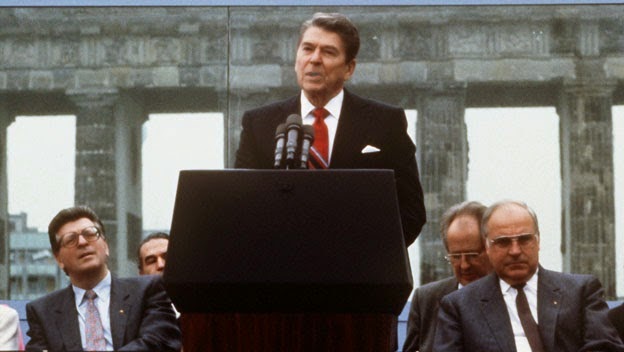 In its famous speech, on 12th June 1987, in the West Berlin, American President Ronald Reagan, urged the Soviet leader Mikhael Gorbachev with the famous sentence: “Tear down this wall!”. On this date, diurnal (daily horoscope) done for Berlin, Reagan had his Sun at 20° Gemini, while his natal 1-7 axis goes over 20° Sagittarius – 20° Gemini. All this supports 20° Aries – 20° Libra axis by harmonic aspects. This is the picture of a ‘successful call’ which Reagan spoke up to the Soviets precisely from Berlin.

Reagan and Gorbachev met for the first time in the famous Reykjavik Summit on 11th October 1986, eight months prior to Reagan’s speech in Berlin. Then, the Nodes axis was going over 20° Aries (North Node – future) and 20° Libra (South Node – past), through the axis which pictures Berlin in the Zodiac! This was just but another sign… 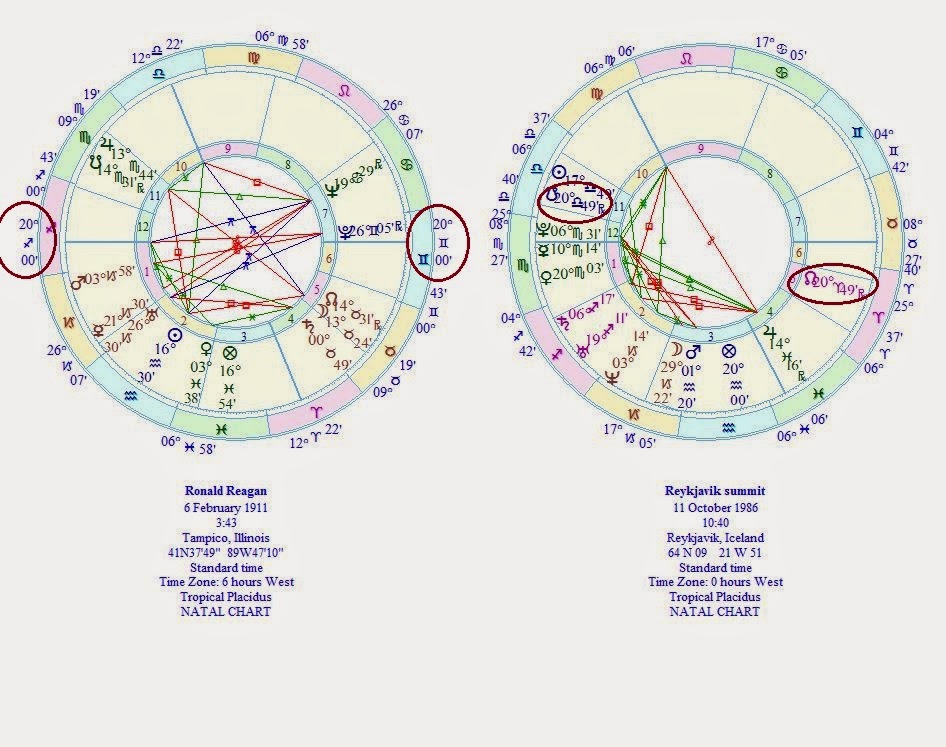 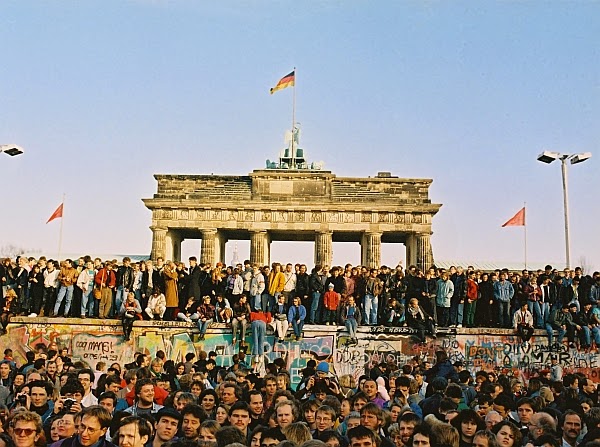 The Berlin Wall came down on 9th November 1989. The Cold War ended precisely thanks to the Soviet leader Gorbachev and Germany was reunited on 3rd October 1990.

Today, Germany is ruled by the first female Chancellor in the history of this country. Of course, this is Angela Merkel, who has been running this country successfully for almost a full decade. It is interesting to see the secondary progressions of the horoscope of a new, united Germany (3rd October 1990, 12:00, Bonn, Asc 7° Sagittarius) for the moment of her coming to power, 21st November 2005. Precisely then, the secondary IC-MC axis (territory – government in the country) was going through 20° Aries – 20° Libra, which now, quite certainly, confirms the significance of this axis for this country! 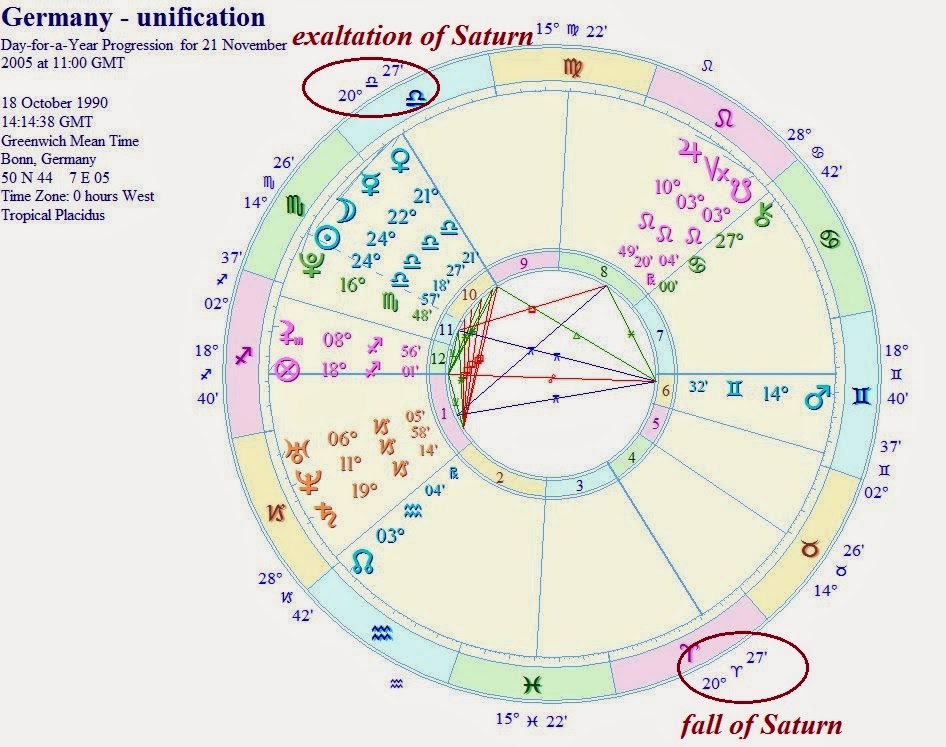 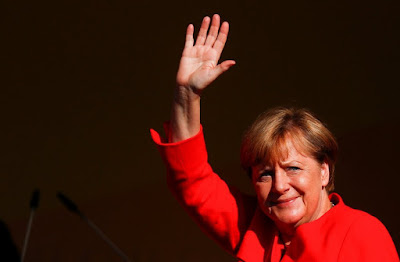 The last Uranus – Pluto square, seventh in row, will be happening on 17th March 2015. This square will be going through 15° Aries – 15° Capricorn and it will activate the seventh energy center (chakra), which we relate to the planet of Saturn. As the 20° Aries – 20° Libra axis is practically the Saturn axis (its fall and exaltation), it is interesting then to look at the chart for this event, as precisely the Ascendant at that moment (observed for Greenwich, the picture for the whole world) it will be set precisely at 20° Sagittarius, which is at Ascendant of Ronald Reagan, which will support the 20° Aries – 20° Libra axis (Berlin). We may now foresee that Germany could easily take a leading role in the world, having in mind that Angela, in her natal chart, has the Moon (German people) at 15° Aquarius, which will be making a sextile with Uranus at 15° Aries and a semi-sextile with Pluto at 15° Capricorn. It remains to be seen what is the role that Angela Merkel will take over, what will also have a final effect onto the German people… We can certainly expect the role to be a central ‘royal’ one (15°) … 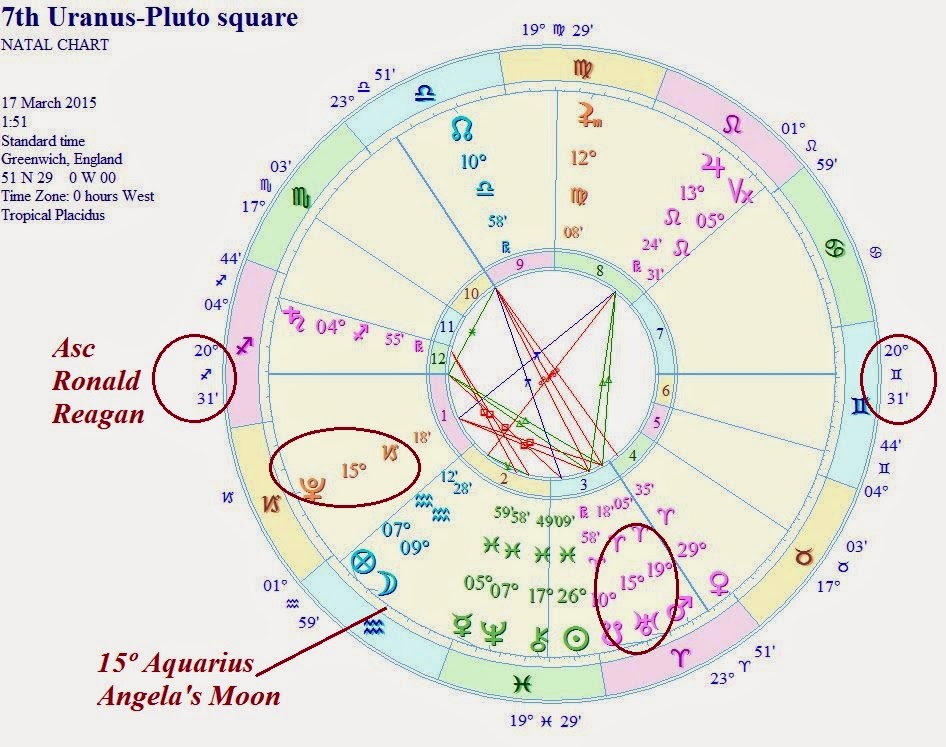