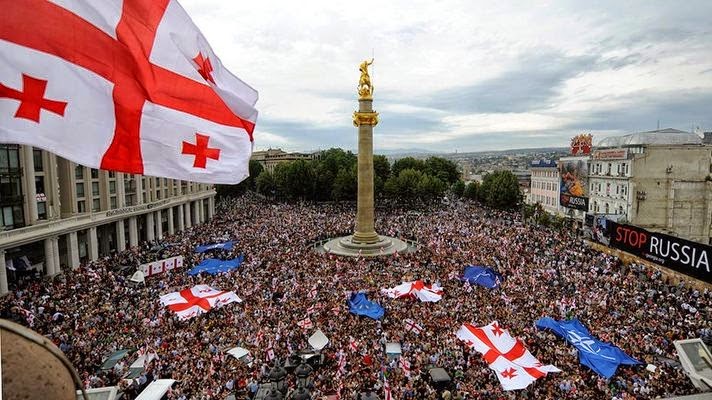 Last Georgian king was called George and that was a sign that after his death the country to be entrusted to St. George... Inside the Zodiac, on 15º  Cancer,  Jupiter (God) is exalted and the name is always energy, the name is destiny.. .

The former Soviet republic, Georgia, may soon become important on a global scene, if judging by the fact that I have mapped this country on 15º  Cancer within the Zodiac, and also that we are waiting for the last, the 7th, the historic,  square of Uranus and Pluto (March 17th, 2015. ) that will go over 15º Aries / 15º Capricorn.

Georgia is located on the border between southwest Asia and Eastern Europe, and the Georgians themselves call their country "Balcony of Europe". After the military conflict in South Ossetia in early August 2008, in which intervened  Russia, Georgia has lost sovereignty over the provinces of South Ossetia and Abkhazia, which declared their independence. The Republic of Georgia still considers these provinces its own territory, under temporary occupation. These territories are internationally recognized only by Russia, Venezuela and Nicaragua, and the whole international community (EU, US) - has denied international recognition.

Picture of Georgia in the horoscope of New Russia

If we look at the horoscope of the New Russia, we see Jupiter, the ruler of the 4th house (territory), on 15º Cancer, in conjunction with Chiron (healing, pain), which is also on 15º Cancer! At the time of the Russian-Georgian war, Vladimir Putin (current president of Russia) was the Prime Minister of the country. His Jupiter (extension, expansion) in the natal chart is the ruler of 8th  house (wars) of 10th house (he as President), and at that time was in Solar Arc direction on 15º Cancer! Thus, in the horoscope of the New Russia, we could, on 15º Cancer, have a picture of Georgia.  With  Jupiter and Chiron conjunction we have the image of a country which has a wound, an injury. Otherwise, after the end of the Russian-Georgian war - Georgia left the Commonwealth  of the independent states, which is a "disguised" continuation of the former USSR! 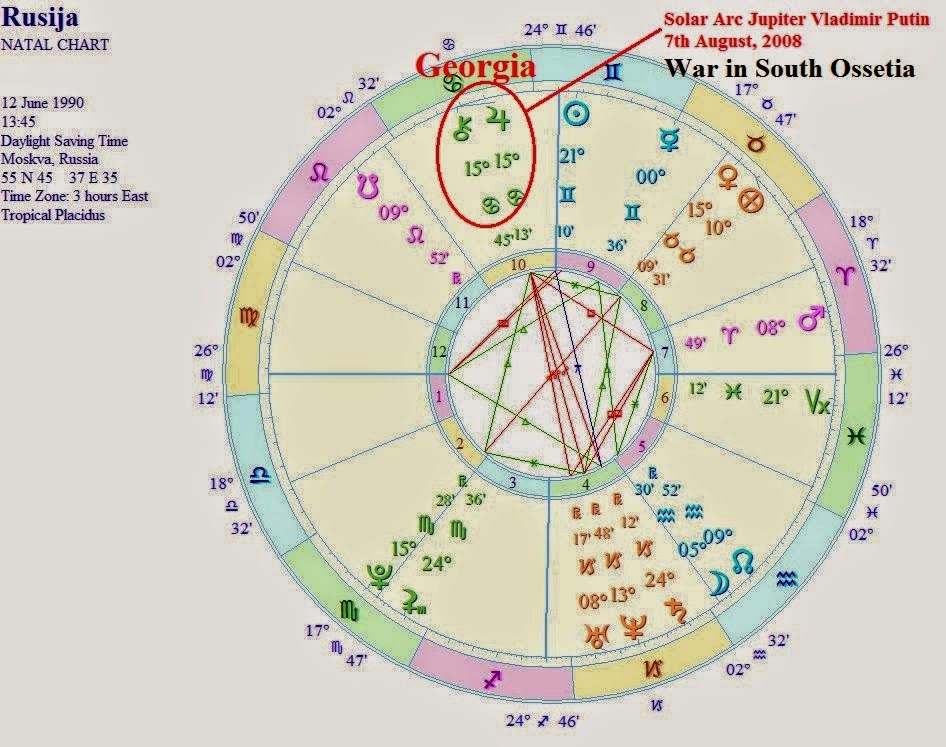 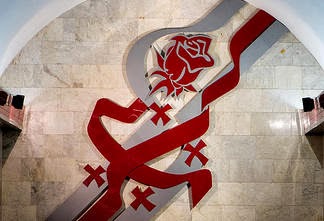 The current Georgia (April 09, 1991) has MC (reputation of the country) in Aries. In the period of the so-called, famous "Rose Revolution", in November 2003, which resulted with a change and  departure from power of the famous president of Georgia, Eduard Shevardnadze, Solar Arc Mars (ruler of the MC) was on 15º Cancer! Otherwise, at 15º Cancer Shevardnadze, in his chart has Pluto! Members of the opposition have accused him for corruption, which was consistent with a direct arrival of Mars at the degree of exaltation of Jupiter (the law), on 15º Cancer! 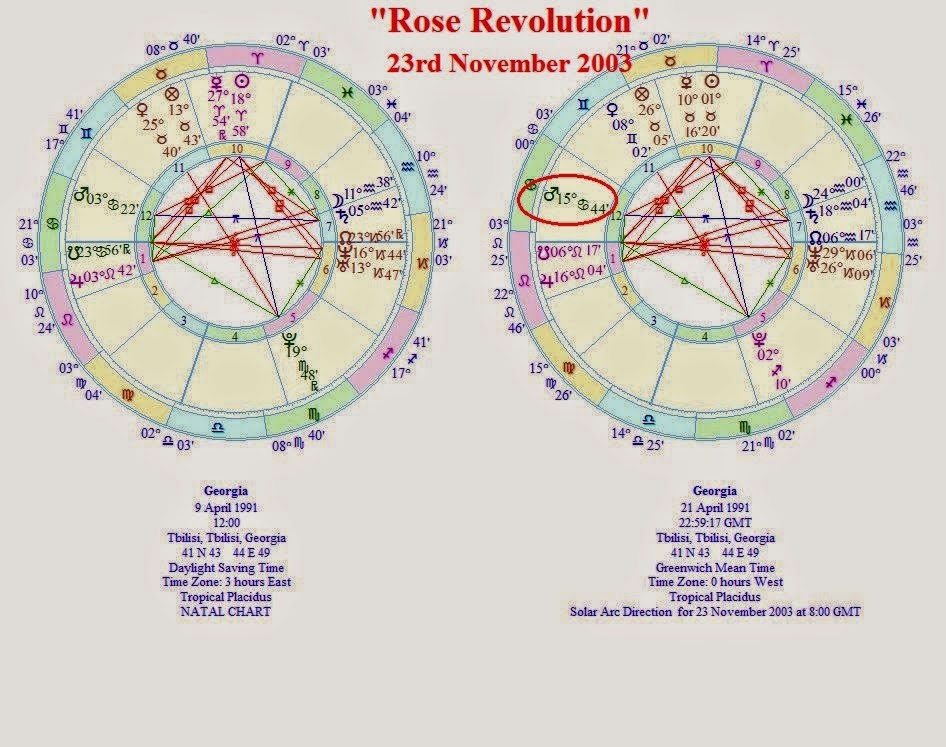 During 2015, Russia has progressed Sun (President) just at 15º Cancer, crossing Jupiter and Chiron of the horoscope of New Russia, so over the degree that represents Georgia. This could be a picture of Vladimir Putin, who somehow comes in connection with Georgia. Interesting is that  Solar Arc Chiron (wound, injury) from the horoscope of the Soviet Union -  this year  is positioned on 15º Cancer (Georgia)! Otherwise, the very top of 4th house (territory) in the horoscope of the USSR was just around 15º Cancer! 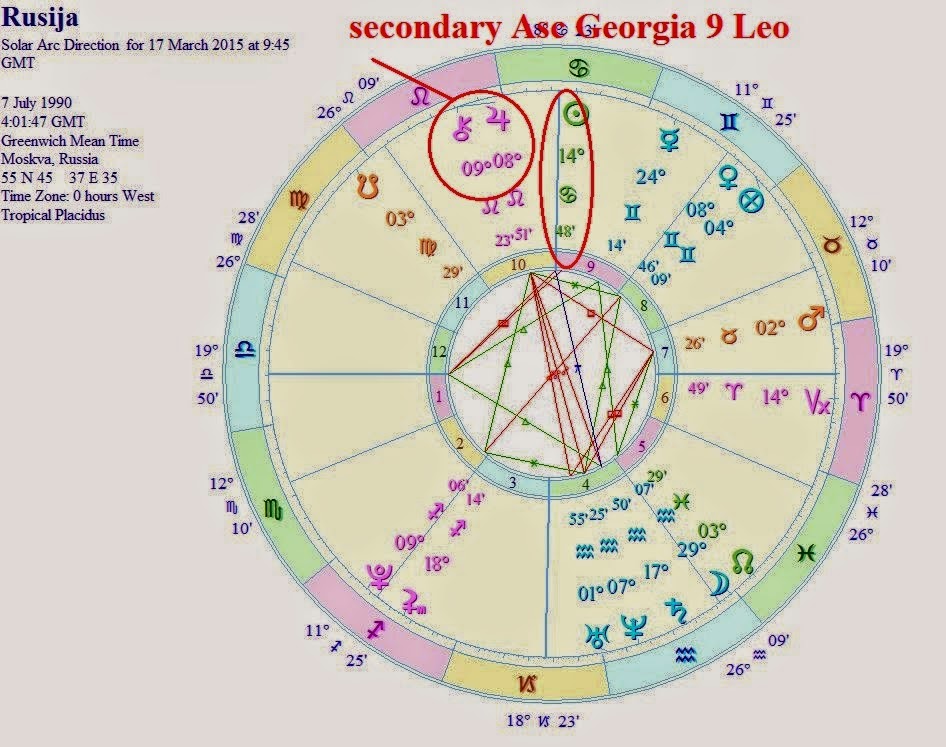 If we want to see the relationship between Russia and Georgia, we can do it if we calculate the harmonic point of Mercury and Jupiter in the horoscope of New Russia. Why Mercury and Jupiter? Because Mercury is the ruler of the Ascendant and  represents Moscow, capital of Russia, but also here it also represents an authority, because Mercury is the ruler of the 10th in chart of New Russia too. On the other hand, Georgia is here Jupiter on 15º Cancer, which is intercepted sign in the 10th house. Interception takes time and a planet that is intercepted – is sensitive to transits. 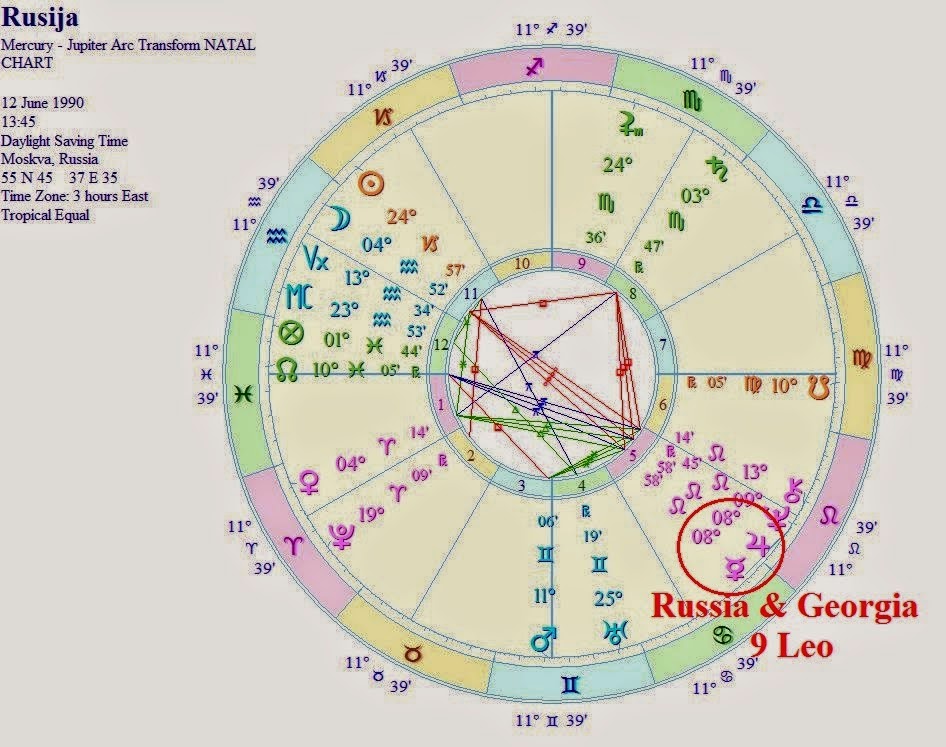 In the chart for the relationship between Russia and Georgia we  found that the Harmonic point of  two countries is on 9º Leo, on  the South Node of New Russia, so this is here certainly a story about loss, because South Node has that connotation. Just this year, 2015, the secondary Ascendant of Georgia is on 9º Leo, while at the same place are Solar Arc Jupiter and  Solar Arc Chiron of New Russia! 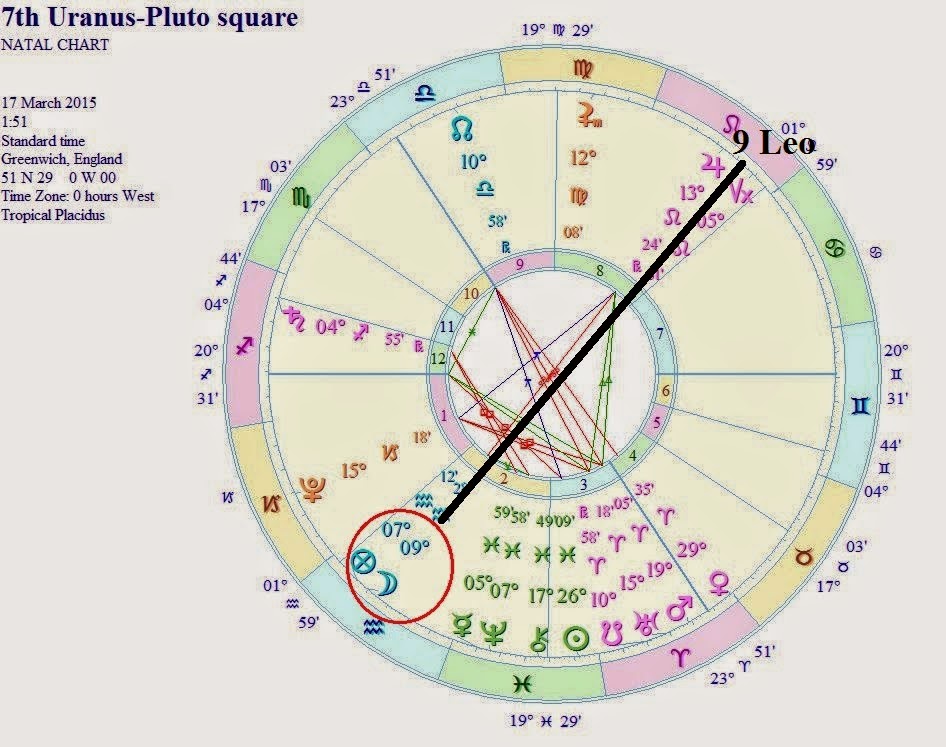 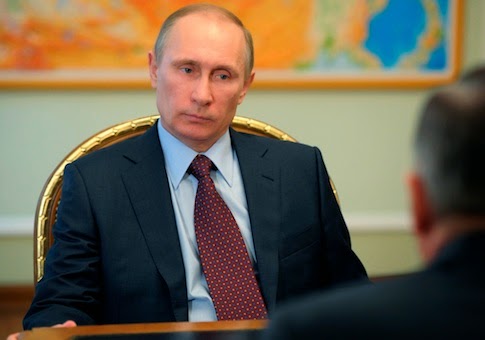 Does new Putin's "adventure" is another former Soviet republic? Remains to be seen... About Russia's involvement in conflicts abroad, I wrote in September 2011 in my article "Russia and 26º fixed signs," when I announced Putin's victory in the elections of March 2012 and the beginning of a turbulent period for the country, since the first Uranus-Pluto square (over 8º of cardinal signs, Aries and Capricorn) has just turned on Mars on 8° Aries, and Uranus on 8º Capricorn  from the horoscope of  New Russia.
у фебруар 27, 2015