US dollar and 15ºCancer Published: 27th May 2013 | Author: Smiljana Gavrančić

US dollar and 15ºCancer 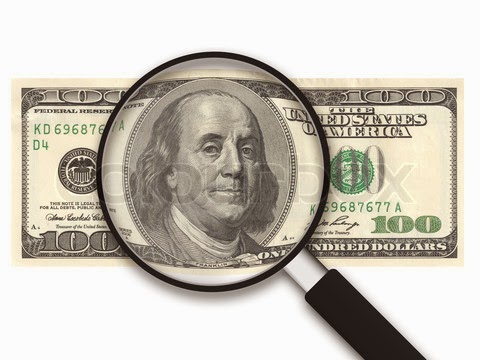 The biggest benefic, Jupiter, will soon enter the sign of its exaltation, the sign of Cancer, meaning that the American nation (as well as the rest of the world) may justifiably anticipate a moment when Jupiter, while transiting this sign, will get at 15° Cancer, the very degree of its exaltation, and the reason for this is that precisely at this degree (15° Cancer 05’) there is the midpoint between Jupiter (the essential signification for large amounts of money, but also the ruler of 2 – currency, the banking system of the country) and Mercury (the ruler of 8 – loans, borrowings…) in the United States chart! 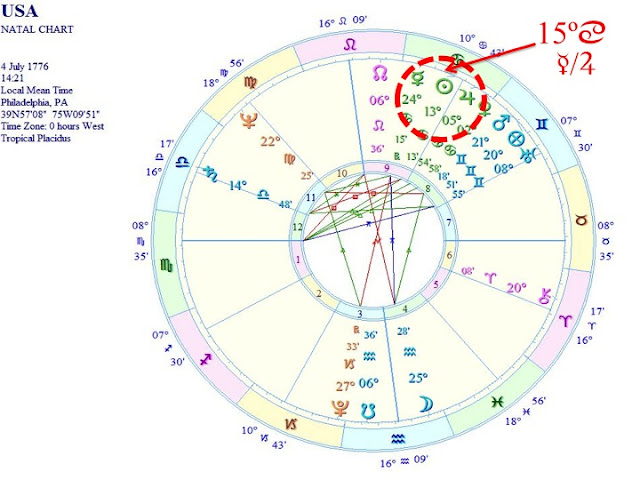 All this will be accompanied by Saturn (stability) in the directions (Solar Arc) of President Obama from 15° Pisces, as well as natal Saturn (stability) of Jack Lew (a new Finance Minister in the Obama Administration) from 15° Scorpio, making a Grand Water Trine over 15°, thus 2013 is the year of great opportunities when it comes to stability of the US currency. This is not the year of the end of economic crises, but it sure is the year in which certain positive steps can take place. However, as every story, this story has its beginning…

Therefore, even though, at first glance, in the chart of the United States we do not see anything at 15° Cancer, we must not neglect the aforementioned midpoint (15° Cancer 05’), which was touched at the moment when Dollar became the official currency of the country, which is a foremost international economy today. It is not surprising that this country has managed to develop into a leading economy in the world, as it is generally known that at 15° Cancer (in addition to its educational and spiritual value) is also the place where great money lives! 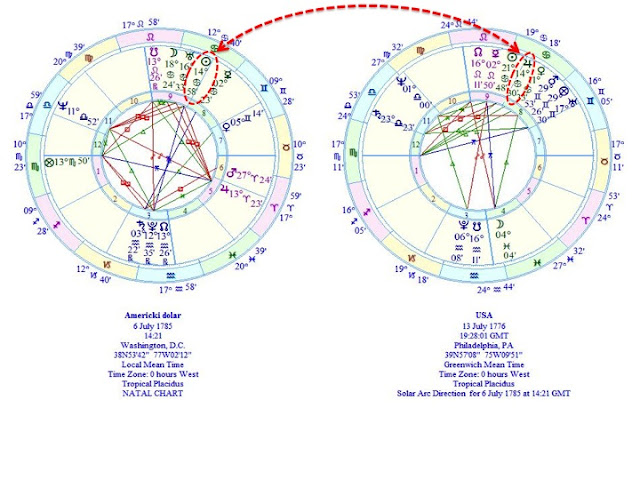 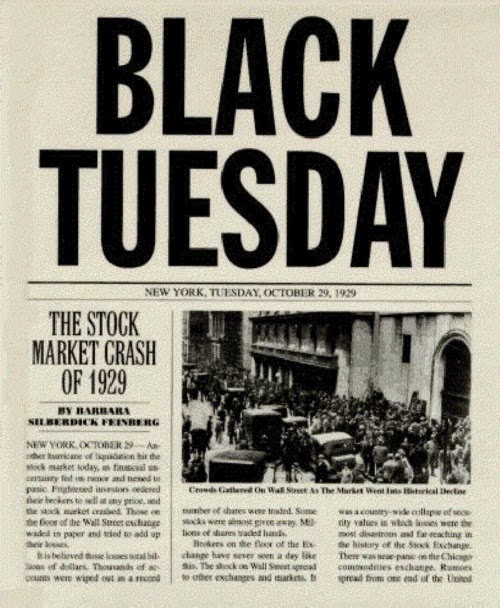 The United States, as a country, are “sensitive” to 15° Cancer when it comes to the finance system. Namely, if we go back, i.e. to the date known in history as “Black Tuesday” (29th October 1929), to the date when Great Depression started by the stock market crash, precisely in the United States, then in a daily horoscope (diurnal) of this country we find the axis 2/8 (the axis that is connected to finances) across 15° Aries - 15° Libra. 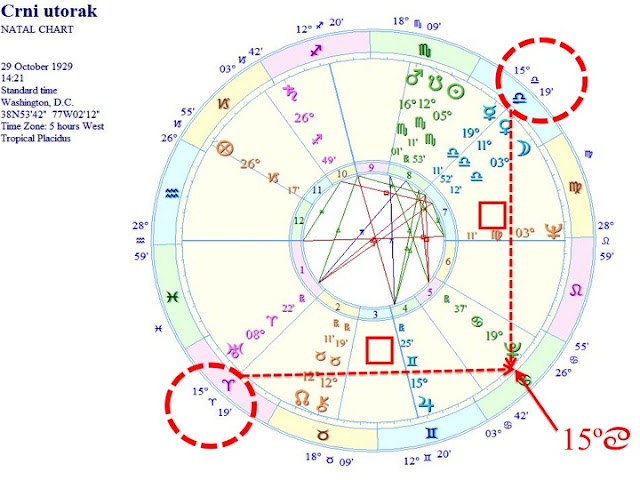 As 15° Cancer is presents the Apex of a cardinal T-square and its main focal point, we may conclude that 15° Cancer is the place which can be easily related to the American currency. To all this, I would like to add the fact that Saturn (debts, borrowings…) in the chart of this country is at 14° Libra 48’ (almost 15° Libra), making also a square (a problem) at 15° Cancer (the US Dollar).

Anyway, whatever the case is, during that very year of 1929, Uranus (change) was transiting in Aries, like it is doing today (from 2011 to 2018), whereas Pluto (deep transformation) was transiting Cancer (and it is now in the sign opposite to it – Capricorn). More precisely, this was the time of Uranus-Pluto square, like the time in which we live today, the time of seven historical Uranus-Pluto squares (from 24th June 2012 to 17th March 2015).

As the world’s international crisis is our reality today as well, then it is interesting to see directions of the United States for the day when the crisis started. As the date for it is taken to be 15th September 2008 (you may read more about this in Article “Forecasting Financial Crisis of 2008”, author – Raymond Merriman). 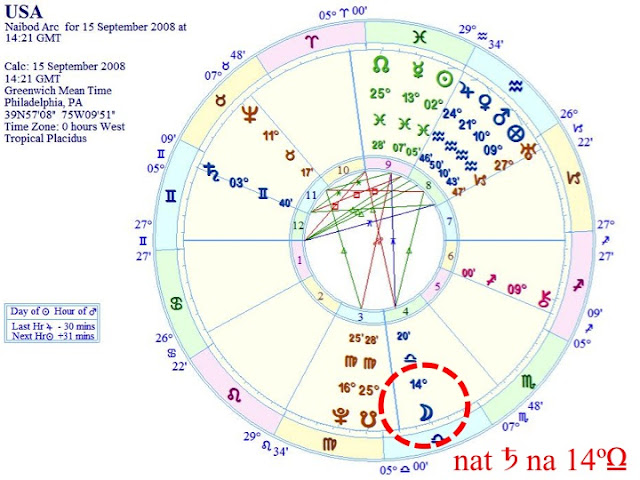 Namely, in the directions (Naibod’s Arc) we find that the Moon (the American people, the nation) was at 14° Libra 20’, meaning exactly at a degree of natal Saturn, which is already squaring the aforementioned degree (15° Cancer)… This, in itself, is a picture of “depression”, quite similar to that which was called the “great depression” in 1929.

However, 2013 New Year started on 21st December 2012 (winter solstice) and, at that moment, we had the famous “Boomerang” configuration in the sky at 8° Sagittarius that announced a possibility of resolving tension during 2013, precisely in the area of financial situations, having in mind that the tip of “Yod” was at natal Uranus from the 8th house (the area of finances).

Existence of an opportunity to stabilize and consolidate things in the finance area during 2013 is also confirmed by the fact that, precisely this year, President Obama’s directions show Saturn (stabilization) at 15° Pisces making a true exact trine with 15° Cancer (American currency). Saturn, in addition to being an essential significator for stability, in the chart of Obama is in the sigh of its domicile (in Capricorn), which makes him additionally stronger, but the planet which “colors” retrograde Jupiter (the ruler of 2 – currency, from 10 – him as President).

In the end, the new Finance Minister in the Obama Administration, Jack Lew (29th August 1955, New York, New York, time of birth-unknown) has, in his natal chart, Saturn (stabilization) at 15° Scorpio, which is already now making a Grand Water Trine across 15°. A Grand Trine is always a new kind of gift, talent, and, as this is the case of a Grand Water Trine – it is necessary not to be inert and lazy, as, if we do not go with the flow with inertia – the results here may be very well noted. It is necessary to use here the talents we were given… 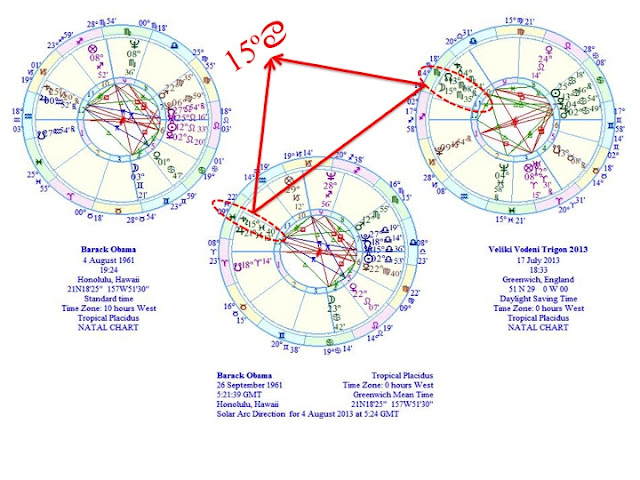 However, I would say that in this story at 15° Scorpio (the place of Jack Lew’s Saturn) is something we should pay attention to, having in mind that the Moon will be at this very degree on 17th July 2013, at the moment when a “Dragon” configuration is to be formed! The Moon from 15° Scorpio will contain as many as four plants from Cancer which will practically touch the four plants from the United States’ chart, thus appointment of Jack Lew to be a new Finance Minister (at the end of January 2013) was an excellent move of Obama...

At the moment when Jupiter enters the sign of Cancer (observing it for Washington D.C.), the axis 4-10 (the opposition – government, i.e. Republicans – Democrats) will be transiting precisely across 14° Taurus 45’ - 14° Scorpio 45’, which will be in a sextile – trine with 15° Cancer (American currency), which may lead to a conclusion that the stability of American currency will be what “reconciles” this opposition, i.e. Democrats and Republicans, during the stay of Jupiter in the sign of its exaltation. To all of this, I would like to add that the axis of  nodesnwill also support 15° Cancer, which is also promising. 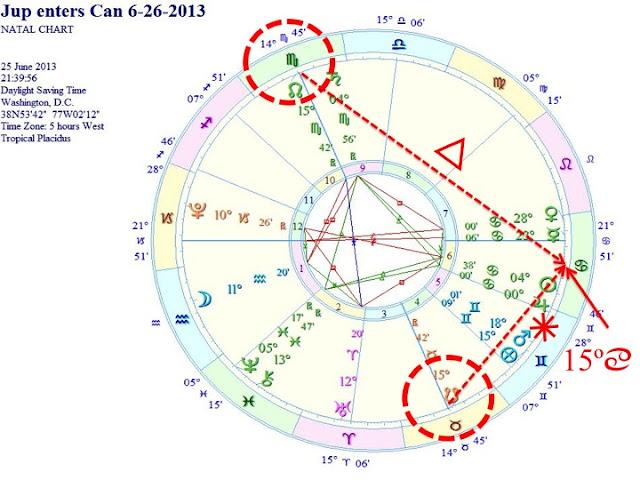 While 2013 (as also a good part of 2014) brings possibility of stabilization and consolidation, the very end of 2014 may put the United States again before a kind of a challenge. Namely, the Lunar Eclipse (obscuration of the Moon) of 8th October 2014 may be something that will put stability of the American currency into question, having in mind that it will be happening at 15° Aries, which will automatically, by a square, affect 15° Cancer (American currency), but also Saturn (debts) from 14° Libra 48’ from the United States’ chart, thus this may be a repeated beginning of a challenging period for the first world’s economy. Namely, the main focus here is again at 15° Cancer (American currency) as well as the plant which is the apex of the cardinal T-square!

Also, the midpoint of Venus and Pluto, who are natural rulers of 2/8 axis (the finance axis), is at 15° Aries 15’ in the United States’ chart, thus the eclipse at 15° Aries surely activates this point.

I would say that the mentioned eclipse will only be an introduction before the seventh (the last) Uranus – Pluto square (17th March 2015), which will be happening across 15° Aries - 15° Capricorn, which will again include 15° Cancer (American currency), as well as Saturn (debts) from 14° Libra 48’.

It is interesting that his square will be accompanied by the first obscuration of the Moon (the lunar eclipse) in 2015 (4th April), this time at 14° Libra 24’, precisely at the natal Saturn (debts) in the chart of the United States, i.e. across from the last obscuration from 15° Aries (8th October 2014). More precisely, the seventh square of Uranus and Pluto will practically happen between the two lunar eclipses happening across 15° Aries - 15° Libra! 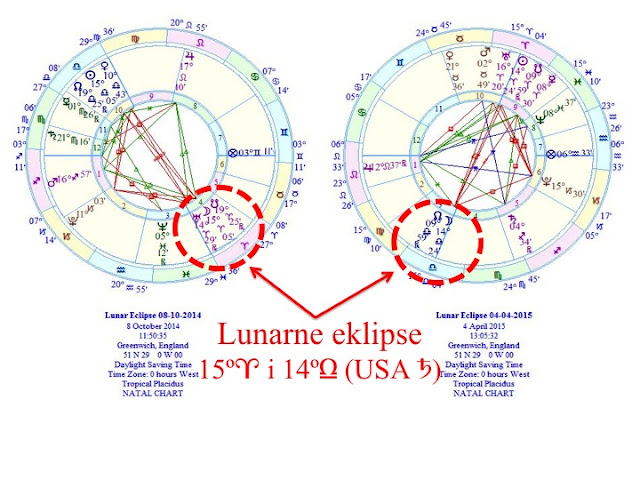 However, there will be an exit from this tensed situation. In the chart of the seventh Uranus and Pluto square, precisely the Moon from 9° Aquarius 28’ (which is also the dispositor of 15° Cancer – American currency) will get into the application exact sextile with directive Ascendant of President Obama (then at 9° Aries 58’), thus it will be the key for resolving this tensed situation (a cardinal grand cross), being, in line with all this, in the hands of the America’s first man! 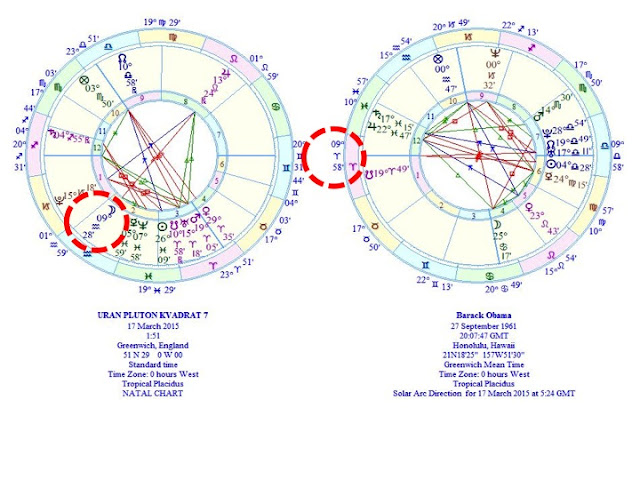 That 9° Aries is a significant point in the chart of this country is also confirmed by the fact that the midpoint of Mars and Pluto is precisely at this degree (9° Aries 25’), whereas Mars and Pluto are the rules of the Ascendant (circumstances in the country, the capital city…) of the United States, than this precisely is the image of Washington D.C. Mars and Pluto are the natural rulers of the 8th series (finances), thus this point may be observed from the angle of the series 8! On the other side, the sign of Aquarius (where the dispositor of 15° Cancer will be) will, of course, offer a possibility to change things, as this is the sign about free will, about the right of making a choice, thus President Obama will really have an opportunity to make a change… There will be an alternative, and this is what looks promising here…