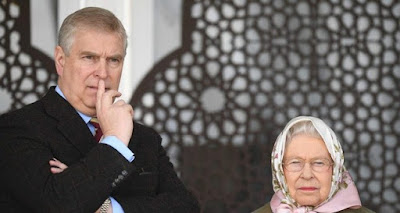 Prince Andrew announced on Wednesday that he would step back from public life, seeking to contain a firestorm over his ties to the disgraced financier, Jeffrey Epstein which threatened to scorch the entire British royal family in its wake.

The prince’s extraordinary statement capped a tumultuous four days since his televised interview regarding Mr. Epstein, which ignited a storm of negative press coverage, prompted companies with ties to the prince’s charities to distance themselves from him, and rekindled calls for him to testify to the F.B.I. about his tangled history with Mr. Epstein, who was accused of sex-trafficking.

“It has become clear to me over the past few days that my association with Jeffrey Epstein has become a major disruption to my family’s work and the valuable work going on in the many organizations and charities that I am proud to support,” said Prince Andrew in a statement issued by Buckingham Palace.

Prince Andrew is 11 º  Leo rising, and Mercury (words) turned direct on Wednesday 20th November 2019, at 11 Scorpio, squaring Prince Andrew’s natal axis Asc/Desc over 11 º  Leo/11 º  Aquarius. Interesting is that even his secondary progressed Moon (publicity) is crossing over 10 º  Aquarius 27’,  and very soon it will be at his natal Desc (public enemies, relationships), and in his natal chart the Moon is ruler of his 12th house (secret enemies). I wonder if soon, during the second half of December, as well as during first half of January 2020 – some unexpected secret enemy (or enemies) could appear and become his open enemy (enemies)? As the Moon is always a female figure, I wonder, could that be some woman (or women)? We will see...? Also consider that his natal Moon is at 25 º  Scorpio, ’impacting’ 25 º -26 º  Taurus across, where the malefic fixed star Algol (Perseus constellation) is located. Algol always describes a very angry woman with blocked sexual energy who is seeking for some kind of revenge or retribution. With Algol, we always have some 'cutting heads off', which means: death, losing reputation, losing position. Algol’s nature is Mars-Saturn-Pluto, and we can see that Prince Andrew has in his natal chart Mars, as well as Saturn, in Capricorn, in his 6th house (people who work for him, who serve him). Mars exalts in Capricorn, and regarding traditional astrology, the 6th house is house of Mars’ joys. So, Andrew’s ’Mars’ we could call perfect. On the other hand, Saturn is in domicile in Capricorn, which is great too, even having it in 6th is not something promising. However, I would say he has good Mars/Saturn placement in his natal chart.

Also, we must notice he had his second Saturn Return during this year, i.e. on 31st January 2019, when transit Sun (natal ruler of his Asc) was exactly at 11 º  Aquarius, opposite his natal Asc 11 Leo, and just sitting at his natal Desc (public enemies, relationships). Both female planets, the Moon as well as Venus were in his Saturn’s Return chart at 26 º  Sagittarius, very close with his natal Jupiter 28 Sagittarius 23’. When Prince Andrew stepped down yesterday, transit Venus was at 23  º Sagittarius 32’, very close with transit Jupiter 27 º  Sagittarius 23’, preparing soon to make conjnction at 28 º  Sagittarius (on 23-24 November 2019) in his natal 5th house, which will be at the same time the day of his Jupiter’s Return (25th November 2019, just one day before the New Moon at 4 º  Sagittarius).Venus/Jupiter combination, even in Sagittarius (where Jupiter is at home, in domicile) – I see as an affair! After all, it is Zeus (Jupiter), the God of affairs.

The ruler of his Asc 11 º  Leo is the Sun, and right now , in secondary progressions it is placed at the very end of the sign of Aries, at ’anaretic’ 29 º  Aries, and we can interpret from this  that Prince Andrew is going through some kind of transition period, because each 29 º  means some endings, as well as some new beginnings will soon show up, when his progressed Sun reaches 0 º  Taurus. Right now, he chose well, because 29 º  means it is time for resting, it is time for transition. Also, we may observe his father through his secondary progressed Sun at the very end of Aries, at 29 º, and suspect that Prince Philip might not be so well? Pay attention when transit Saturn crosses over 29 º Capricorn in mid-March 2020, squaring Prince Andrew’s progressed Sun 29 º  Aries – time for responsibility, as well as challenging times for his father.

Solar Arc North Node of Prince Andrew is right now at 24 º  Scorpio 12’, preparing soon to touch his natal Moon at 25 º  Scorpio 29’ in his 4th house, which all could be an image of his mother, Queen Elizabeth II. Another interpretation could be that it is also a sign that there is a big lesson for Prince Andrew, because Vedic astrology states that our North Node is the place from where we learn our lessons and at the same time where we should ’digest’ our mistakes. Very often we expect to get from North Node, but I would agree that is the place where we could take our life lessons too! Also, we might expect that his mother will be the one who is going to give him some big lesson!

The last summer eclipse, on 16th July 2019, the lunar one, was at 24 º  Capricorn, where is the location of Prince Andrew’s Solar Arc Moon, and he is still under the influence of that eclipse. In late January 2020, transit Saturn will cross over 24 º  Capricorn, which will be the time when he should take even more responsibility for his life. Saturn will demand that he  sorts out his life and to clean all that does not serve him anymore. After this, Pluto will join in crossing over 24 º  Capricorn as well, which will lead to a substantive transformation in his life, he might expect many more attacks, but these are all for his greater good and all in order for him to transform himself and clean his life from people from Pluto’s world (after all, his natal Moon is in Scorpio – underground world).

Very interesting is that his Solar Arc Pluto, the dispositor of his natal Moon 25 Scorpio, is at 4 Scorpio, and where we recently had the New Moon (on 27th October 2019). Very soon, in the next few days, transit Mars will cross over 4 Scorpio, and Uranus already makes an opposition with 4 º  Scorpio, across, from 4 º  Taurus – that’s why he got this unexpected  ’shaking’ from the underground world. He has in his natal chart Uranus in 1st, so unexpected events – are very familiar to him, because with Uranus in angular 1st house Prince Andrew is all that Uranus represents – stressfull life, divorcing, unexpected up-side-down life, not respecting rules, etc.

His natal Sun, the ruler of his Asc 11 º  Leo is at 0 Pisces 00’, in 8th house, in opposition with Pluto, so naturally, by itself, he attracts man (as well as men) from the underground, because he needs some ’hurting’ in order for him to learn lessons that are aligned with the evolution of his soul. You noticed that his Sun just crossed over Chiron (wound) 27 º  Aquarius too? 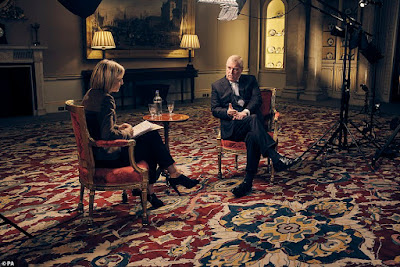 And, one more time, during February 2020, Neptune (secrets) is going to cross over his natal 17 º  Pisces Mercury, when he will be on some kind of test regarding silence – to say, or not to say? Having Mercury in Pisces means that you should not say anything publicly, because if you did it would be your undoing, like some stone falling into the deep water. The whole point here is to keep words to yourself, leaving what has not been said, unspoken! -  then the Universe works for you, bringing you benefits (in case your natal Mercury is in Pisces, where it falls).

His first post-natal eclipse was at 22 º  Virgo, on 13 March 1960, it was the lunar one. Right now, he is having his secondary progressed Asc at 22 Virgo! Isn’t it a strong sign that through this event, he is getting such a huge life lesson and that through this he may just realize his main purpose in this life! The ruler of his post-natal eclipse at 22 º  Virgo is his natal 17 º  Pisces Mercury, and I’ve said above how during February 2020 he is going to pass one more life exam regarding his words, interviews...  Well, if I just add that his draconic Mercury (words, interviews) is at 22 º  Virgo, you won’t believe me?! The Draconic chart carries the memory of our soul from our past life incarnation, and it seems that right now (having secondary progressed Asc once time in his life, and the only one, over 22 º  Virgo, where his postnatal eclipse occurred– purpose in this life), Prince Andrew is now passing some past life exam!

Just to let you know, Prince Harry has his natal Sun at 22 Virgo!

Also, very interesting for mentioning is his draconic Fortuna (the most important point within everyone’s chart because it includes Asc, the Moon and the Sun) is at 12 º  Scorpio 10’, and Mercury just turned direct at 11 Scorpio, very close with 12 º  Scorpio! 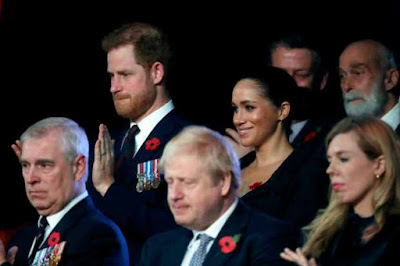 And, just to remind you, that King Edward VIII has Uranus (as ruler of his Asc) at 11º Scorpio, which activate the Grand Fixed Cross over 11 of Taurus, 11º Leo, 11 Scorpio and 11 Aquarius. At 11º Taurus, there is Mars in UK chart, and I wrote about this topic in my article   What Edward VIII, Wallis Simpson, Prince Harry, Meghan Markle and Princess Diana have in common?  You can read it why 11º of fixed signs would be so important in 2021 for Royal's family and why Harry (with his draconic Asc at 11º Scorpio) and Meghan (with her natal axis Asc/Desc over 24º Cancer/24º Capricorn and her draco Uranus at 24º Cancer, and her draco Venus at 11º Taurus) might choose the same direction as Edward VIII and Prince Andrew.When transit Uranus hits Mars of UK at 11º Taurus, as well as Edward VIII Uranus 11º Scorpio-there will be more unexpected events within the royal family, during 2021. King Edward VIII abdicated on December 10, 1936 – if we take a look at the horoscope for that moment (for noon), there is transit Moon at 10º -11º Scorpio, at the degree of Uranus’ exaltation, crossing over his natal Uranus 11º Scorpio, moving UK Mars 11º Taurus, as well as opening the grand fixed square over 11º Taurus/Leo/Scorpio/Aquarius.

Interesting, there will be soon UK general election, and secondary progressed Moon of Boris Johnson is approaching 11 Scorpio too! Read more about it in my article UK General Election at 12th Dec, 2019 .

Also, we must have on mind that Queen Elizabeth's II Solar Arc Moon is at 11 Scorpio too so I wonder will there be new stepping down with royals soon?

Read about Smiljana: here
You can always book your reading with Smiljana via email: smiljana.gavrancic@gmail.com
Use conult sale offer from 15th-25th Nov, 2019- 5% off for new clients, and 15% off for returning clients. Here you can read what kind of services Smiljana provides: Book Your Reading With Smiljana