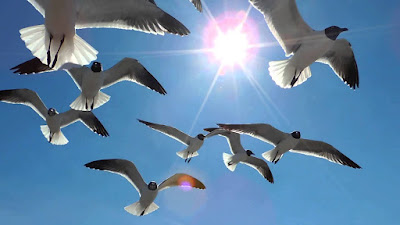 
We are living very special time... Venus is retrograde, and she travels within the sign of Gemini, longing to make her ’lower’ conjunction with the Sun at 13 º Gemini, on 3rd June, 2020. When Venus is retrograde, she is always somehow within her own ’underground’, i.e. she has Scorpionic vibe, even she is not in Scorpio. She has to go very deep, inside of her own underground, in order to touch the light (... conjunction with the Sun), and to become somehow much more aware. The meeting is happening at 13 Gemini, as I’ve said already, and the Sabian symbol for that meeting is: TWO PEOPLE LIVING FAR APART IN TELEPATIC COMMUNICATION. So, we can conclude, they do not touch each other, they are not next to each other, they do not share the same table, the same bed, but their minds are in strong, deep, connection. Even if they are not talking literally, they’re talking... Listen here song True Love

Only two days after retro Venus/Sun ’lower’ conjuntion, there will be the first summer eclipse, the lunar one, on 5th June 2020, at 15 º Sagittarius 34’. Every 15 º is so called ’royal’ degree, because it is the center of each sign. This lunar eclipse is part of  mutable T-square with Mars at 15 º Pisces (and Mars is running into conjunction with Neptune at 20 Pisces soon after the eclipse), as well as with retrograde Venus at 12 º Gemini 18’.  Mars/Neptune in Pisces is very problematic energy, there is some fog, and we should not act at all, emotions are full of passion, dreams are very high, but we should not dream too high, the secret wants out, and it will go out, because it is time... Venus is still retro, and recently she met the light (the Sun) – she is now aware, she knows that she and her lover have to wait, still, there is only distance in space, but not in their minds, they are together always...
The lunar eclipse is the Full Moon in other word, but there are lunar nodes involved too, so there must be some emotional cleaning, Mars/Neptune conjunction from Pisces will ’push’ the cleaning happens.  The energy  of T-square will find its way to ’explode’ and do what it needs to do. And what will happen? The secret must go out, and it will go out.

The dispositor of lunar eclipse in Sagittarius, as well as of Mars/Neptune conjunction in Pisces – is the same, it is retrograde Jupiter in Capricorn, which is preparing to make soon again conjunction with retrograde Pluto. So, we can conclude that the Moon from Sagittarius (through dispositor, Jupiter in Capricorn) goes into the sigh of its fall, so we may touch some kind of emotionally fall, but after that, there will be very deep, intense, transformation with retrograde Pluto. On the other side, Mars (as the focal planet of mutable T-square) is going from Pisces into Capricorn (through its dispositor Jupiter), which is great position for Mars, and even if we we are going to ’push’ at the beginning,later, our energy will calm down, and it will get its transformation (conjunction with retro Pluto).

Mercury is in Cancer and ’out-of-bounds’ during eclipse, and the lunar eclipse carries within itself all what is within the sign of Cancer,so, we are going to speak a lot, and it will be very very loud... We will say more then we would have to say, we will express our emotions using very deep words. What I’ve found as interesting is the position of Fortuna (the most personal point in everyones chart ) in the moment of the lunar eclipse – it is at  5 º Gemini (Venus will turn direct on 25th June at 5 Gemini).
The Sabian Symbol for the lunar eclipse at 15 º Sagittairus is: Seagulls watching a ship

Speaking and listening; watching and being seen; listening and being heard: these are active motifs. if one has something to say, and is waiting for the right time to say it, the listening audience may not be entirely receptive... So, say it, and say it loud! 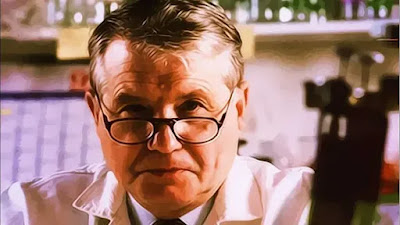 Luc Montagnier, the French virologist and Nobel Prize winner for his work on HIV, said the SARS-CoV-2 virus, was created in a laboratory by inserting genes from HIV-1, the AIDS virus, into a coronavirus
To back up his theory, Montagnier cited the study by a group of researchers at the Indian Institute of Technology in New Delhi, which found “an uncanny resemblance” and “little chance of coincidence” in the amino acid sequences of a SARS-CoV-2 and HIV-1 protein. The study, published on a website where scientists share ongoing analyses without waiting for expert verification, was later withdrawn by its authors.

If we now take a look on the chart of Luc Montagnier (Nobel Prize winner) who recently said “Coronavirus was created in a laboratory” we can find he is Cancer rising, with the Moon in his 10ht (his career, reputation, status) at 15 º Pisces (where is Mars as focal planet of mutable T—square during lunar eclipse on 5th June 2020), squaring 15 º Sagittarius/15 Gemini (axis of lunar eclipse).  His Asc is at 9 º Cancer (close with his Mars 8 º Cancer ’out-of-bounds’), and there will be Mercury ’out-of-bounds’ in the moment of eclipse, so this man could speak loud again, putting a lot of his effort and energy to say something to ths world. What he could say? The Sabian symbol for his Asc and transit Mercury is: A Large Diamond In The First Stages Of The Cutting Process. The process of cutting, grinding and shaping a 'Diamond' takes skill, care and time...

I think his chart shows us his research is very prominent for the current time, ’cause he has Saturn retrograde at 29 º Capricorn in his 8th (researching work) and you know that the most of the world went under lockdown when Saturn was crossing over 29 º of Capricorn, in March 2020. Saturn will, in retro motion, again enter Capricorn, i.e. cross over 29 º Capricorn from 2nd July until 17/18th July 2020. What I do not like is that at the same time retrograde Jupiter is crossing again over 22 º of Capricorn, and bringing big possibility there will be the second wave of coronavirus in the world. Saturn’s returning at 29 º Capricorn could also mean the world might go again under some lockdown
Luc’s Uranus (discovering) is at 23 º Aries, and his Pluto is at 22 º Cancer. Better say, he has cardinal T-square and 2020 ’called-out’ it, since January, when Saturn/Pluto met at 22 º Capricorn, ’moving’ Luc’s Pluto (researching work), as well  as soon after it his Uranus too. His lunar nodes axis goes over 17 º Pisces/17 º Virgo, and Mars/Neptune midpoint in the moment of lunar eclipse will be around 17 º Pisces 30’.

Luc’s secondary progressed Mercury (his words) is at 13 º Sagittarius, just across 13 º Gemini, where retro Venus and the Sun will meet on 3rd June, so we can expect some new insights from this man, like he is going to say to us more...  Moreover, his Solar Arc axis of lunar nodes during 2020 goes over 13 º Gemini (North Node)/13 º Sagittarius (South Node), so it seams this man may do, may say, something which will have a big impact in the future, like he is making something big for his (our) future lives...

His secondary progressed axis Asc/Desc is going over 14 º Virgo 43’/14 º Pisces 43’, which puts his natal Moon (ruler of his Asc) into air and gives him a lot of attention in public life, and which puts his reputation, career, again into big focus.

On the personal level, the influence of an eclipse lasts until the next eclipse of the same type, while on a mundane level the influence lasts for several years in some cases. Since the age of Ptolemy, there’s a rule that an eclipse’s effect on a state will last as many years as the eclipse lasted in hours/minutes.

Recently, on 18th March 2020, Luc had his Saturn return, and there was the Moon (his natal ruler of his Asc in Cancer) at 20 º Capricorn, making strong conjunction with Mars 21 º Capricorn and Jupiter 22 º Capricorn. Better say, one more sign that July (after March) could be very important for him and his work.

Here you can read my work on Coronavirus