Death of George Floyd; The meeting of retro Venus and the Sun at 13º Gemini Published: 31 May, 2020 I Author: Smiljana Gavrančić 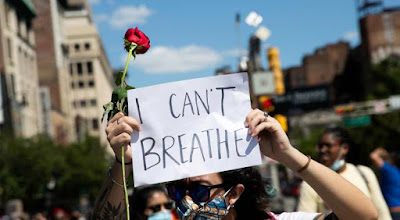 On May 25, 2020, the death of George Floyd, an African-American man, occurred in Powderhorn, a neighborhood south of downtown Minneapolis, Minnesota, United States. While Floyd was handcuffed and lying face down on a city street during an arrest, Derek Chauvin, a white Minneapolis police officer, kept his knee on the right side of Floyd's neck for 8 minutes and 46 seconds; 2 minutes and 53 seconds of which occurred after Floyd became unresponsive, according to the criminal complaint filed against Chauvin. Officers Thomas K. Lane, Tou Thao, and J. Alexander Kueng participated in Floyd's arrest, with Kueng holding Floyd’s back, Lane holding his legs, and Thao looking on as he stood nearby.
The incident was recorded on the smartphones of bystanders. The arrest was made after Floyd allegedly attempted to use a $20 bill in a deli, which an employee identified as counterfeit. Police stated that Floyd "physically resisted" after being ordered to exit his vehicle before the video was filmed. Surveillance footage from a nearby restaurant appeared to contradict police claims, with Floyd shown falling twice while being escorted by the officers. The criminal complaint stated Floyd "did not voluntarily get in the car and struggled with the officers, intentionally falling down, saying he was not going in the car, and refusing to stand still" based on body cameras worn by Lane and Kueng. Video recording by a witness, showing the arrested Floyd repeating "Please", "I can't breathe", and "Don't kill me", was widely circulated on social media platforms and broadcast by the media. All four officers were fired the next day.

After Floyd's death, demonstrations and protests in the Minneapolis–Saint Paul area were initially peaceful on May 26, but later that day became violent as windows were smashed at a police precinct, two stores were set on fire, and many stores were looted and damaged. Some demonstrators skirmished with police, who fired tear gas and rubber bullets. A preliminary autopsy found no indication that Floyd died of strangulation or traumatic asphyxia, but that the combined effects of being restrained, underlying health conditions, including coronary artery disease and hypertensive heart disease, and potential intoxicants in his system likely contributed to his death. Attorneys for Floyd's family announced that they have requested an independent autopsy.

Floyd's death has been compared to the 2014 death of Eric Garner. Garner, also an unarmed black man, repeated "I can't breathe" eleven times after being placed in a chokehold by a New York police officer during an arrest in Staten Island.Transit Venus was then at  the very end of Gemini, at 29 º Gemini (17th July, 2014, 3:00pm-3.45pm), which will soon be ’moved’ by the solar eclipse on 21 June 2020 at 0 º Cancer: Mercury was at 5 º Cancer (at the same degree Mercury will turn direct on 12th July 2020).

But, very interesting is the position of transit Jupiter (law) in that moment, it was at 0 Leo, and axxis 0 º Leo/0 º Aquarius will be ’moved’ on 21 December when we are going to have the great conjunction of Jupiter and Saturn at 0 º Aquarius. It will be Christmas time, and the US will already have new/old President. If we progressed the chart for the moment of death of Eric Garner, we can notice progressed Sun just came at 0 º Leo! Sabian symbol for 0 º Leo is: "A case of apoplexy"

It may seem obscure to some. 'Apoplexy' is a term formerly used for a stroke, but really is an image of a sudden rush of energy to the head and face.

The Sabian Symbol for 0 Aquarius is: An Old Adobe Mission In California.

'An Old Adobe Mission in California' is a symbol of man's ability to take natural materials from the environment to build something lasting and enduring that protects, sustains and nourishes the community on every level

Secondary progressed Mercury (the ruler of Venus 29 º  Gemini in the moment when Eric died) just came at 14 º Cancer, and from that degree, Mercury will turn retrograde soon, on 18th June 2020!

In the horoscope of the United States, the ruler of Asc, Mars, is at 21 º Gemini 18’, and it is ’out-of-bounds’, in 8th house (dangerous, violence death), showing it can go extremly over limits regarding its nature, showing its ’bad sides’. Mars at 21 º Gemini 18’ was recently ’called-out’ when Venus turned retrograde on 13 May 2020, from the same degree, bringing the US Mars much more in focus during retro Venus period (13 May-25 June,2020). Also, you can notice Mars of the US is in strong, applying square with Neptune 22 º Virgo, and currently, transit Neptune is at 20 º Pisces, so in Mars/Neptune square in the US chart we can have an image of a policeman who will use his power (going over his limits, ’out-of-bounds’) and showing his real face (square with Neptune in Virgo, where Neptune is in its exile, so we can take it is very weak Neptune).

Wikipedia says the death happened between 8:08pm-8:28pm, so if we cast the chart for 8:08pm, we can see Asc almost approaching to 29 º Scorpio, which is the end of the end, the end of the life, the end of the dark – I take 29 º Scorpio as degree where we do our transition from death into heaven,  because at 0 º Sagittarius, which is naturally 9th sign within Zodiac, we start to live after our death which happens within the sign of Scorpio (8th sign in Zodiac). Naturally, we live our lives from 1st house until the end of 8th house. From 9th until the end of 12th house – there is our heaven life. Interesting, that part of the Zodiac, from 9th until the end of 12th house – describes also our journey within our mother’s uterus, before she gives delivery.


Very often, during retro journey of Venus, death happens, becauase it is some kind of a journey through the Hade's world. Retro Venus meets the Sun (light) in order to become closer with herself, it is some kind of inner love...

Several years ago, better say in early September 2013, I made my research, finding out that US is sensitive over 13 º Virgo/13 º Pisces axis, which is, by the way, axis of Mercury’s exaltation/fall degree. Right now, we are in Venus’ retro period, as I’ve mentioned above, and in few days, on 3rd June 2020, there will be the ’lower’ conjunction of retrograde Venus and the Sun at 13 Gemini, which will exact open (with squares) axis of 13 º Virgo/13 º Pisces, axis which is very important for the US generally, through a lot of historical events in its past. What is very interesting, is that the secondary progressed Moon (people) of Donald Trump during June 2020 is crossing over 13 º Virgo, which is again sign for me that my degrees system works well! Moreover, have on your mind that Trump’s axis Sun/Moon goes over 22 º Gemini/21 º Sagittarius, and this axis was recently ’moved’ when Venus turned retrograde. With Moon, Mercury and  Venus ’out-of-bounds’ in Trump’s chart, we can see why his talks are very out of limits, often, with expressing his emotions on very strange (sometimes very ’funny’) way.

Transit Uranus (revolution) is crossing over the US Desc, making at the same time an opposition with Asc of US, which brings very unstable moments to the country, generally, protesting will be something which comes by itself in a time ahead. Transit Moon was at 13 º Cancer 55’, crossing over the US natal Sun (President), and very soon, on 5th July 2020, we ae going to have the lunar eclipse (culmination) over 13 º Capricorn/13 º Cancer. The Sun in the US chart is in square with Saturn at 14 º Virgo, so I would stay that the presidency of Donald Trump is going under big test, over and over, again and again, and the death of George Floyd may bring him new problems, just few months before the US President election (3rd November 2020), but this brings more repression by him and his cabinet. I am sure he will go with strict rules!  Transit Sun was at 5 º Gemini, and Venus will turn direct from the same degree on 25th June 2020. Transit Pluto is making an opposition with retrograde Mercury of the US at 24 º Cancer for a longer time, which makes people will show their voices, speaking sharp, showing a lot of anger during their speaches.   It may spread in the moment when retrograde Jupiter soon, during summer 2020, touches again retro Pluto (end of June, and early July).
Several years ago, in my article on the US Election 2020 brings female energy, I said how in the moment of election, progressed Moon of the US will be at the end of Capricorn, at 29 º, crossing over progressed Pluto of the US, making a big transition in the US, because after 29 º of Capricorn, there is 0 º Aquarius –totally new time. Also, I said how the black females, Afro-American, or Hispanic (because I link Spain with 29 of Capricorn), may have very important roles within that transition period. For now, I can’t see it may happen, because the Democratic candidiate, Joe Biden, is a male, white.  So, only if some female, black, figure showes up soon, then I can speak more   on this topic of  President election in the US. But, the death of George Floyd did not come without a reason, it may  change a lot in next months, until the US election in Novembar. Recently I did read somewhere that Biden said if he wins, the Vice President will be black female...Also, it will be interesting will Trump open more seats in his administration for black people, after this event... I even gave good chance to Kamala Harris in my article on 24th Sept 2019, but she gave up from the race in Dec 2019. Here you can read my article on Kamala: FOR THE PEOPLE
This part I added on 13 August 2020-Jo Biden choosed Kamala Harris for his running mate. If he wins, she will be the first woman Vice President, and the first Afroamerican woman who will take such a big position in the history of the United States. Here you can read my article on The US Presidential Election 2020 which I've posted on my blog on 6th October 2020.

In the chart of Minneapolis, we can see Saturn (black) almost at 13 º Pisces, and in Solar Arc right now it is at 3 º Virgo, where is Trump’s progressed Sun, so this event really may put a lot of stress on Trump’s Presidency, as I’ve said above already, testing him and his presidency...

If we take a look the horoscope of Minesota, we can see there Vertex at 13 º Sagittarius, which will put in the air the Grand Mutable Cross over 13 which may explode on 3rd June when retro Venus meets the Sun in her ’lower’conjunction.

The Sabian Symbol for Minesota’s Vertex is: The Pyramids and the Sphinx

Memory, it turns out, is not so much about the past but rather a mysterious present moment of knowing.

The great monuments of the pyramids and the sphinx have long been known to be aligned with extra-dimensional realities that defy ordinary understanding. Therefore,today there can be deeper energies at work that would not necessarily on any other day be available.