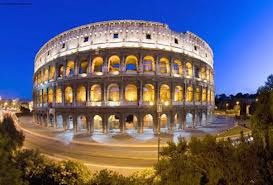 “All roads lead to Rome” is the famous saying, but have you ever wondered through which degree of Zodiac one can reach the door to the Rome?

If we start with the fact that one of the most beautiful monuments of Roman architecture in history – the famous Colosseum, that was added to the list of the 7 new world’s miracles in 2007 – is situated in Rome, than this may be the starting point of our research. You will be probably surprised, as I indeed was to discover that the place like Colosseum, the site of bloody gladiator fights and animal hunting that is so much in the symbolism of the Pluto (death) lives at one of the most beautiful degrees in Zodiac 360°. Believe it or not, it is 3° Taurus, the degree of Moon’s exaltation, the degree where the life (Moon) is the strongest, and the death (Pluto) in the sign of its exile and fall. As we can see, that is the degree directly across 3° Scorpio, which is the fall of the Moon (life) and Pluto (death) exaltation, all completely opposite of 3° Taurus.

Founding of Rome and “kidnapping of Sabine women” – 3° Scorpio

It is interesting that in its chart Italy has the Moon (life, women) in the 1st house (capital Rome) exactly at 3° Scorpio, the degree of the Moon’s fall and Pluto’s exaltation, and if we go back in time, to the very beginning, to the time of founding of Rome in 753 BC, then we can see depiction of the famous event named “kidnapping of Sabine women” or “rape of Sabine women” in the Moon (women) at the degree of life fall, and which is also in square with Pluto (danger). 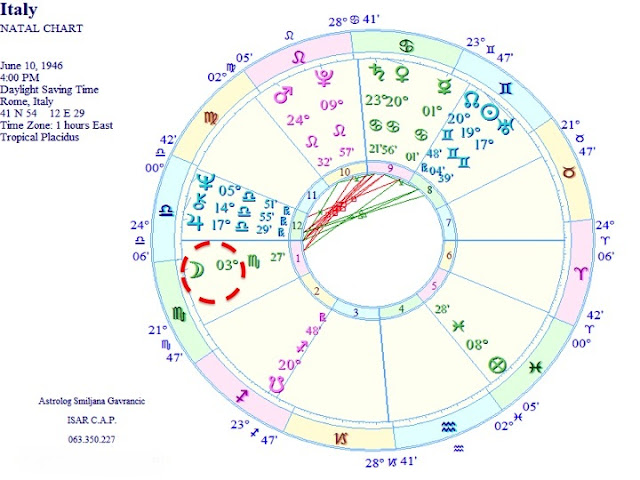 Soon after founding Rome, Romulus accepted runaways in order to increase the number of male inhabitants of the city. But, since there were no women in the city, Romulus decided to nagotiate the issue of potential brides with the adjacent tribe of Sabines. The Sabines refused to give away their daughters, so Romulus decided to take them by deception (intercepted Pluto in 10th – ruler inclined towards secret, dangerous actions). Romulus promised to women that they would be respected by their husbands and have all rights, and give birth to free sons. Sabine women accepted their husbands. Soon after the kidnapping, the Sabine king – Titus Tatius enters the Rome by deceit and starts the fight with Romans. Then, the Sabine women played the key role. They interposed themselves between their fathers and brothers on one side and their husbands on the other side and stopped the battle. It is obvious that the archetype of Persephone (Moon at the degree of Pluto exaltation, in square with Pluto) is very strong and important for the Rome! Romans and Sabines made peace, united under the single rule seated in Rome, and Titus Tatius and Romulus became co-rulers.

Since dispositors of Moon and Pluto (Mars and Sun) make sextile in Italy’s chart, and the orb implies the love (5°), than the depiction of the achieved peace, after the dispute (square), is very certain, and 3° Scorpio represents women (Moon) who are deeply connected to their husbands (as every Persephone is connected to her Hades) and who stop the war, involving themselves into the dispute (square to Pluto). However, those women showed that a deep love may stop the war, so in 3° Scorpio we may see the end of one period and the beginning of the other (the degree of Pluto exaltation always offers the enormous potential for transformation, metamorphosis), and all that because of the women (Moon). After one short war Sabines and Romans became one! Women were the cause of the war, but they also ended it!

Building of the Colosseum – 3° Taurus

The whole Roman history may be divided into four periods. The first period (“Roman Kingdom” or the time of state foundation) started with the Rome founding and is related to the “kidnapping of Sabine women”, an event that marked the history of Rome and cannot be neglected for it has an important message, the message of the importance of 3° Scorpio for the city of Rome!

On the other hand, in the period of full prosperity of Roman civilization, in which it gave its best to the world (the third period of Roman history), and which is called the Principate (27 BCE – 284 CE), the Colosseum was built. Long time after its building, in the 3rd millennia, on July 3, 2007, that structure will become one of the new 7 wonders of the world, and today it is the first thing we think of when we think of the city of Rome! As we can see, Colosseum was built during the new era. The significance of this building (both in the past and today) for Rome and its citizens is best described by the following saying: “While stands the Coliseum, Rome shall stand; When falls the Coliseum, Rome shall fall; And when Rome falls – the world shall fall.”

Let us now take a look at the secondary progressions for Italy for the year the building of Colosseum had started. It was in 72 CE, during the rule of the emperor Vespasian, from the Flavian dynasty. Exactly then, the secondary Sun (ruler, emperor) of the Italy was at 3° Taurus! 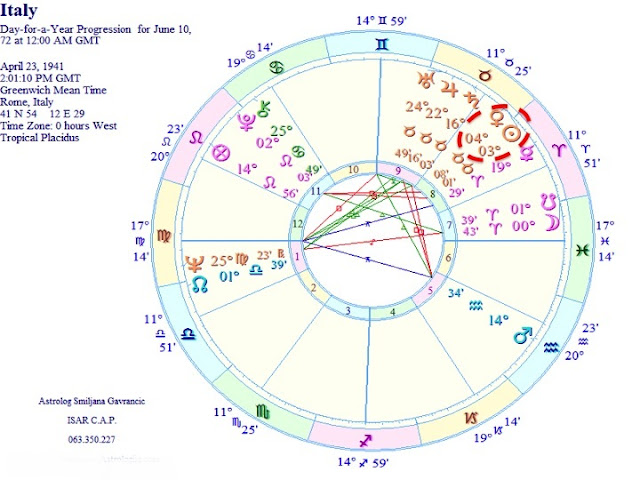 Colosseum was named after the colossal statue of the emperor Nero, who is famous for killing his own mother. Later, Nero’s statue was replaced by the statue of Sun God Helios (Sol in Roman mythology), all that implying the Sun at 3° Taurus, because in mythology, the Greek god Helios was represented by the Sun in Taurus in a good aspect with the Moon, so 3° Taurus – the degree of Moon’s exaltation is an ideal place in Zodiac for Helios. Helios had golden hair and the crown made of sun rays. He lived in the golden palace and every morning he used to drive his golden chariot and give the light, warmth and life to Earth. He loved the life and was respected and loved by all other deities, except the god of the underworld, Hades (Pluto), who is in fall exactly at 3° Taurus! Helios was not welcome in the Hades’ empire. All this implies the Sun at 3° Taurus – the life is loved and celebrated here, lived in the abundance and wealth, fully enjoyed (Nero also enjoyed, if we talk about him – he loved parties, theatre plays, feasts, he enjoyed all too much and was a true hedonist, as every Taurus is)! There is no place for death in here!

The Vatican itself, the Holy See, is in a tight relation with Colosseum. Namely, Colosseum owes its present appearance to fires and earthquakes, and mostly to the fact that during the Middle Ages it was used as building material for other structures, until XVIII century when the Pope Benedict XIV proclaimed it a sacred site, the symbol of Christian suffering and martyrdom.

At the spot where the cross was installed then, the Pope still leads the procession known as “The Way of the Cross” on Good Friday every year, even today. The procession is illuminated by torches. All this implies 3° Taurus, the degree where the life is the strongest. Because of that, you will not be surprised when I tell you that in the chart of Vatican, the Venus (love) is positioned at 2° Taurus 45’ (very close to 3° Taurus), which only confirms that where the love is the strongest, the death is the weakest, for Pluto (death) is in exile and fall at 3° Taurus! As we all know, the Good Friday is “day of mourning”, but the Easter itself is the picture of life that is being regenerated and born again, so 3° Taurus as the degree of Moon’s (life) exaltation is the best description of the procession with torches circling the Colosseum every year before Easter… 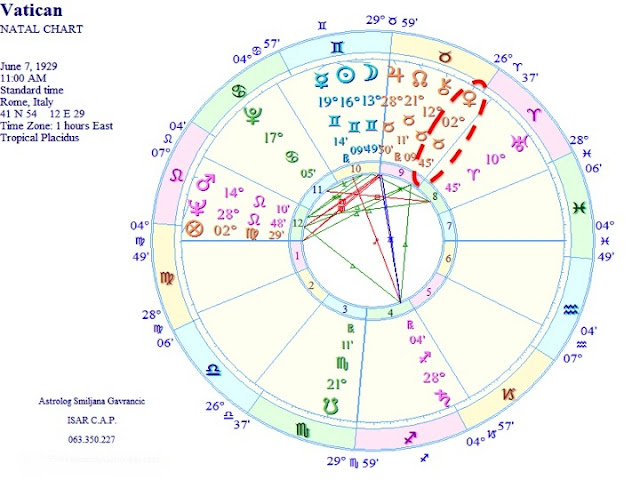 Having been the place of martyrdom and gladiator fights, Colosseum still conveys the strong message today. Namely, each time a death sentence is being reversed or overturned, the white night lights become a golden glow, symbolizing the fight against death penalty. This is another confirmation that 3° Taurus is very important for Rome and for Colosseum as well, being the most important of the city's buildings.
Elton John and Colosseum – 3° Taurus

Colosseum is also attractive for many artists, but so far only four of them succeeded in having their concerts there. They are Ray Charles, Paul McCartney, Elton John and Billy Joel. Interestingly, I took a look at the chart of only one of them. It was enough… Do you know whom did I pick? I took into account who of those four musicians have the hair that looks like gold (Sun), and I immediately knew it was “only one, Elton John!”. Elton John has the Moon at 3° Taurus in his chart, and in the year of the Colosseum concert (September 2005) – secondary Venus (music) was at 2° Taurus 53’ (close to 3° Taurus)! In Elton John’s chart, Venus rules the 5th house (creation, concerts) and the 10th house (career), so the picture is whole… 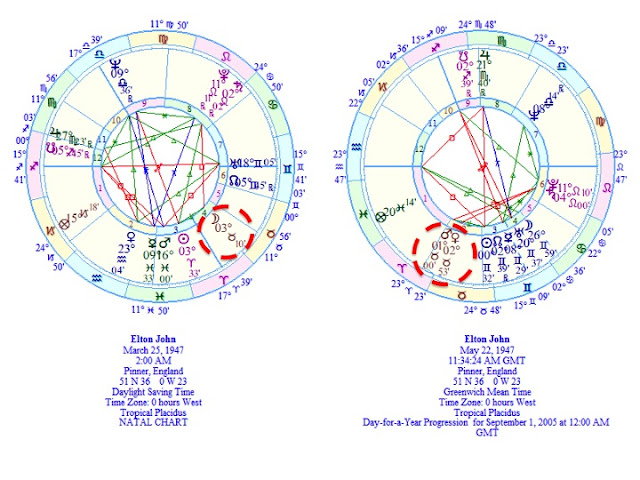 And in the end, it is unimaginable to visit the Rome and not to throw the coin into the beautiful baroque Trevi fountain. There is the saying that if you throw the coin into this fountain, you will come back to Rome… Rome public utility service collects around 3.000 euros every morning from the fountain, which is a nice sum of money, and the money is used to keep the Rome clean. Does this reminds you of the Zodiac degree indicating the abundance – 3° Taurus?! It certainly reminds me… 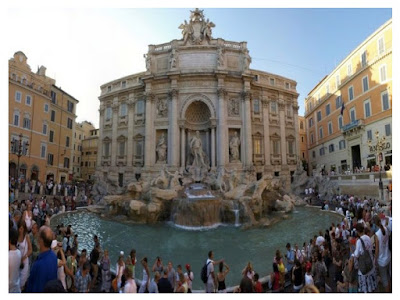 Anyhow, the axis 3° Taurus/3° Scorpio is significant for Rome, and in the beginning it was possible to reach Rome only through 3° Scorpio (remember the story from the beginning, the kidnapping of Sabine women…). In the new era, today, the ticket for Rome is the degree of Moon’s exaltation, the degree of life and celebration, with no place for death - 3° Taurus!

During 2012 it was announced that the works on Colosseum reconstruction begun, because the parts of the stone construction started to fall apart and fall down. The government ensures the public that there is no danger of Colosseum falling apart… and I will add only this: is it possible for something that lives inside the Zodiac at 3° Taurus to just simply vanish?
у октобар 30, 2015