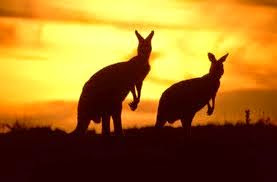 The fact that the period of retrograde Mercury in Pisces can be inspiring was recently proved to me. If you have managed to create the atmosphere of absolute silence inside yourself, to calm the mind and surrender to feelings (Pisces feel and surrender to intuition, they do not analyze), then there is nothing left except that the heaven take you to the road of cognition, secret and gift you a revelation. Since I like to map the Zodiac from the point of view of mundane astrology, during this special time I came in contact with 13° Pisces, the degree of Mercury fall, degree that requires the silence, causes misunderstandings if we are loud, if we say something loudly, because as soon as something is said aloud - it is not correct.

On August 4, 1770, when his directive Moon (people) was at 13° Pisces (faraway places), James Cook (explorer, sailor, cartographer) asked aborigines the question in English -- "What is the name of this animal?" and had the answer "Kangaroo", which actually meant "We do not understand". The captain accepted that as the name of the animal, and presented the world with the unknown animal species. 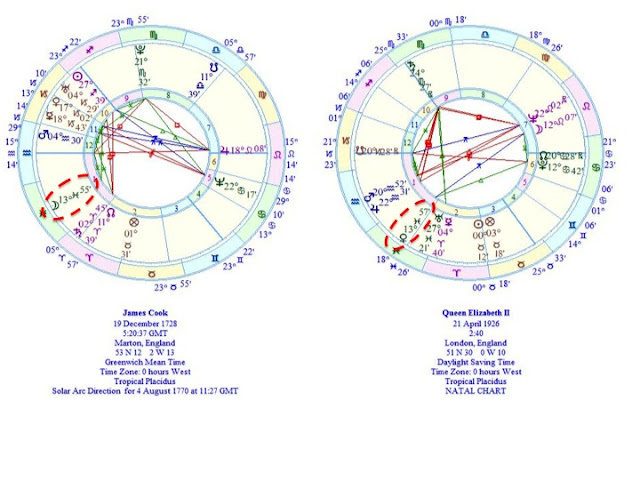 That is how 13° Pisces, degree of Mercury (words) fall, may cause misunderstanding. Since that the Queen Elisabeth II (who is the sovereign ruler of Australia) has the ruler of the 6th house (colonies) from 10 (she as a ruler) - Venus at 13° Pisces, I concluded that Australia itself might really be connected to this Zodiac degree. Primarily, Australia is connected to the sign of Sagittarius, but also to the combination of Jupiter and series 12 (sign of Pisces), and so this continent is connected to the sign of Pisces (faraway places, unknown places).

Kangaroo is the symbol of Australia, it is on the national coat of arms, on some banknotes, and many Australian organizations use kangaroo as their symbol.

The third Uranus-Pluto square - May 2013

Since we live in the period of 7 historical squares of Uranus and Pluto (2012-2015), and before us is the third Uranus-Pluto square (May 2013) that shall activate the third chakra within the lower energy level (Body - unconscious), that is being connected to the Sun and is in the region of solar plexus, and on the level of the planet Earth it is in the region of Australia, than it should be expected that this region of the world become important in the sense of energy. 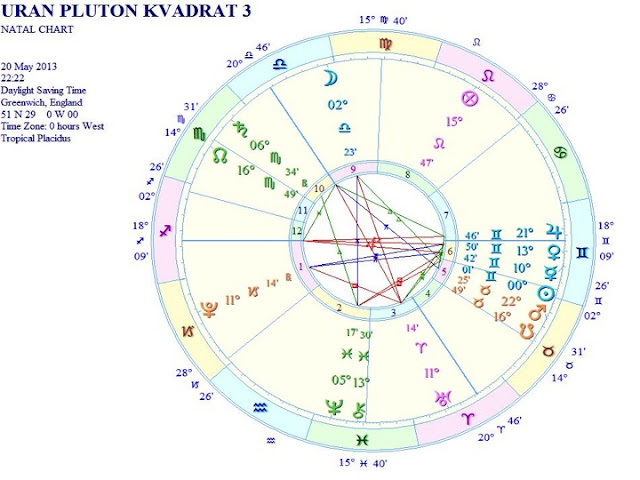 That may last until November 1, 2013, when there will be the fourth Uranus-Pluto square that will activate central, lunar (heart) chakra that is connected to the Moon and represents the main axis around which the Body and Mind rotate, i.e. Heaven and Earth, and which is, and which is, on the level of the planet Earth, in Tahiti, the island in French Polynesia, at the spot from which on June 3, 1769 James Cook (sent by the British Royal Society) observed the unique event - conjunction of the Venus and the Sun, the event that happened again recently, on June 6, 2012. It is interesting that at that very same time (June 3, 1769) James Cook's secondary Moon was at 13° Cancer, very close to the degree of Jupiter exaltation (15° Cancer), the degree that is called the "center of the soul", the degree that recently in my article "Ashmole 782 and 15° Cancer" I designated as the fourth, lunar (hearth) chakra.

But, lets first take a good look at the chart of the third Uranus-Pluto square. There we find Chiron (injury, wound) at 13° Pisces (the degree that I connected to Australia), in the square with the Venus (nature) at 13° Gemini, which can imply some events related to climate change on this continent. This third Uranus-Pluto square is globally connected to climate change, ground movements… so it may be concluded that Australia might be "called out" in this period. If I add that on the very same day as the third Uranus-Pluto square the tertiary Moon - people (moves about 1° in two days) of the Queen Elisabeth II also transits 13° Pisces, than we can really expect that this part of the world would become important! 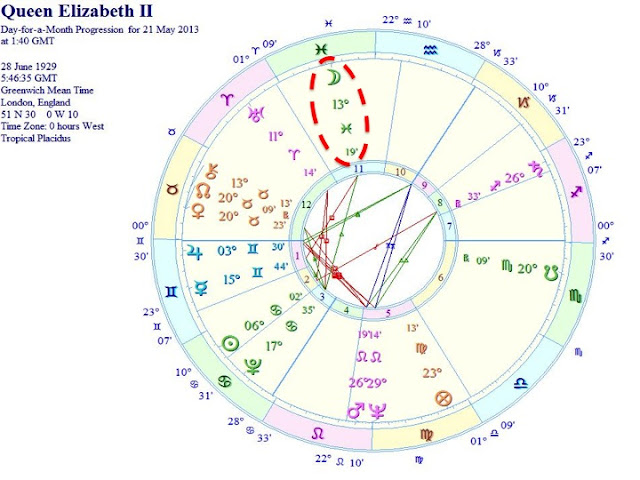 The purpose of the following period

The square certainly implies the problem and on some wider level it may realize itself over Australia. However, since the third chakra (the Sun), when connected to the fifth chakra (Mercury) forms a ring (the circle) around central, heart (lunar) chakra, it would be interesting to take a look at the fifth Uranus-Pluto square. 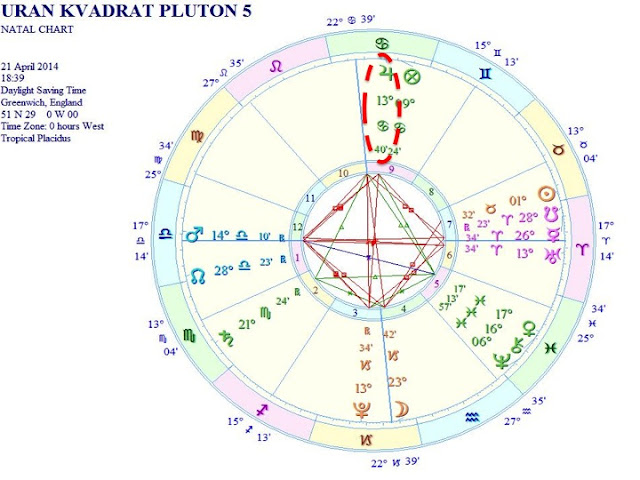 This square will activate the throat (Mercury) chakra, and will happen across 13° Aries-Capricorn, which offers the solution through semi-sextiles and sextiles, but in that same chart the Jupiter at 13° Cancer (secondary Moon of James Cook was at the same spot in 1769) will make an exact trine with 13° Pisces (Australia), and all that implies the possibility that the fifth chakra (Mercury) easily connects with the third chakra (the Sun) and create the ring around Anahata (central, lunar, heart chakra). 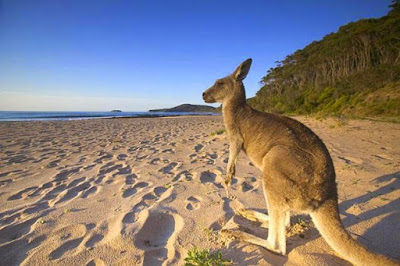 The fifth chakra is in the region of the throat, and we should deny speaking non-truth (remember the story from the beginning of this article - "kangaroo"), gossiping, empty talks… What happens here is waking up, first of ourselves and than of others… Here we comprehend, here we change… Since there is support from 13° Cancer, from the exalted Jupiter, from the center of the soul (the fourth chakra), from the place where every one of us should be close to oneself, or better in love with oneself, because only then one does nothing against oneself, but also nothing against others and against nature - it is to be expected that one will understand that the love for oneself (and others and the nature) is the key!

The fourth, central chakra is the most important and it must have foundation and leverage in the chakra below (the third, connected to the Sun), which forms the first ring with the fifth one (Mercury). So we come to Uranus -- cosmic state of mind, and then we understand that what is below is like that which is above, that what is inside us is like to which is before us. When the mind (5th chakra, Mercury) and the emotion (4th chakra, Moon) are in harmony - then thoughts and words (3rd chakra, Sun) begin to materialize and the cosmic mind (Uranus) is developed.

The silence (13° Pisces) is the key, and when we silence ourselves, calm our minds and become meditative -the nature will return the favor the same way… Only in silence may we reach the love for oneself, and then there is nothing left other than the materialization to be - love!