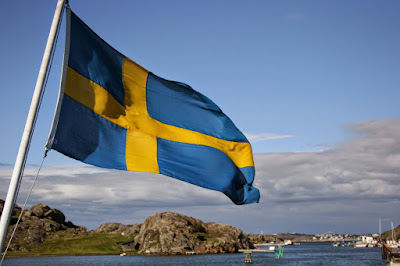 The land of peace and prosperity, country that was not engaged in a war for 200 years, well known for its neutrality -- Sweden, is primarily connected to the sign of Aquarius, the sign that is the first, in front of others in everything… However, this is the sign where the Sun (the king, rulers…) is in exile, so this country faced the loss of its rulers in recent history (two times) -- Swedish Prime Minister Olof Palme was assassinated on March 1, 1986; on Septembar 11, 2003 there was attempted assassination of Swedish Minister of Foreign Affairs Ana Lind. This is symbolism of the sign of Aquarius, here the Sun (the ruler) is in weakened dignity. But, the degree that can be ascribed to this Scandinavian country is the degree of Sun exaltation -- 19° Aries! Well, this is the country that founded the prestigious Nobel Prize that is being awarded in December of each year (since 1901) for the field of physics, chemistry, medicine, literature and peace. Nobel Prize comprises diploma, money grant and golden medal (the symbolism of exalted Sun at 19° Aries)! 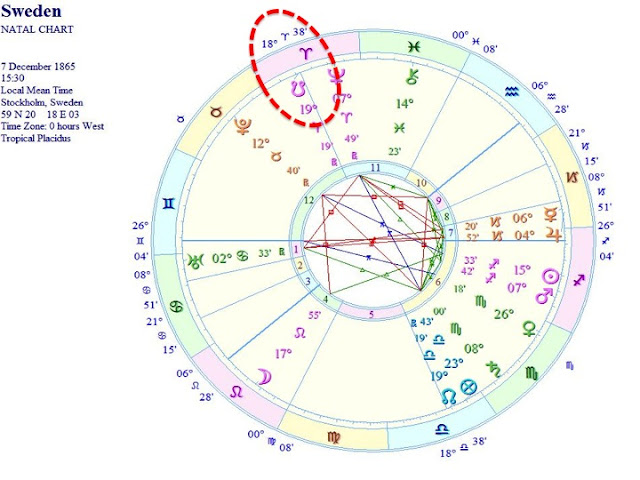 Precisely at 19° Aries in Sweden chart is the South Node (losses), at the cusp of 12 (somebody that approaches you from behind, the house of invisible enemies), so this is a picture of lost rulers. On one side there is the strong, "invincible Sun", whose motto is "All for one and one for all" (which is the characteristics of Social-democratic Party that rules this country in this century as in the last), while on the other hand everything is colored with the symbolism of the South Node (losses)…

Only one who is aware of oneself, the inner self, will never see anybody as competition, enemy, will never have the need to enter into confrontation, wars and we may say that this was left as inheritance from the ancestors (South Node). Sweden is the example of such a country. Although in this country the sun is a rare occurrence, and when it is there -- it is like the holiday for them -- especially on the day of summer solstice, when there is sunshine until the late night hours -- this country could be mapped on 19° Aries! Sweden is not the member of NATO, and it kept its national currency, krona (again the symbolism of the exalted Sun at 19° Aries), although it is the member of the European Union. All this goes in favor of the fact that Swedish people are aware of themselves as a nation, they do not need to be part of anything only to feel stronger and secure. The Sun shines the best at 19° Aries, so it is independent there! 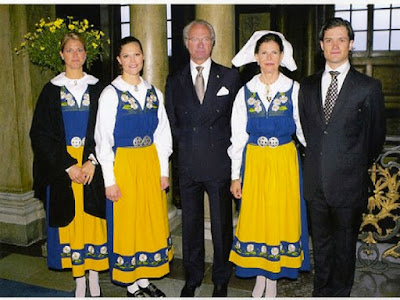 The present King of Sweden, Carl XVI Gustaf, has an active 19° Aries in his chart. His MC (him as a king) is exactly at 19° Aries, which activates the axis of Nodes in the Sweden chart (19° Aries -- South Node, 19° Libra -- North Node). We may conclude that the need to remain neutral, raised above any situation and sufficiently self-aware -- is here inherited from ancestors, is it not? 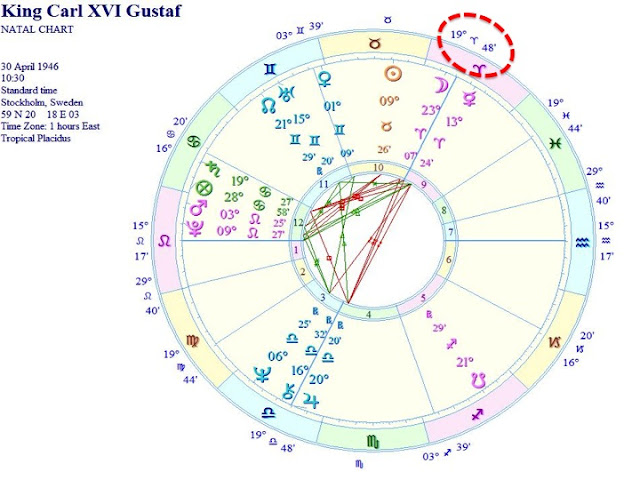 The system of equal primogeniture, 1980

Sweden is the first monarchy in the world that established the equal primogeniture, so the Princess Victoria (as the oldest child of the present Swedish monarch Carl XVI Gustaf and the Queen Silvia, who also have another daughter and a son) is the only female crown princess in the world and the first woman in history to hold that title. Also, Sweden is the country that managed to gather the competitors from five (Sun symbolism) continents for the first time in the history of Olympic Games, but at the same time those Fifth Olympic Games were the last to award the medals made of pure gold (again the symbolism of the exalted Sun at 19° Aries). 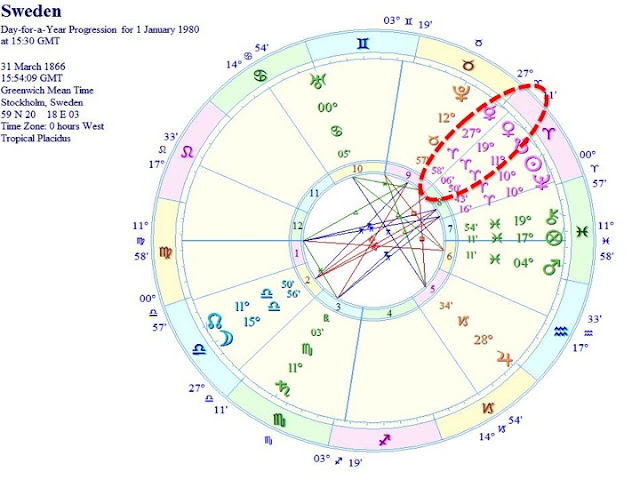 Let us take a look at what degree is the secondary Venus (the daughter, girl) in the moment when the Inheritance Act of 1810 (that gave the right of inheritance to males) was put out of force on January 1, 1980.  As we can see, it is exactly at 19° Aries, the very degree of Sun exaltation!

The fifth Olympic Games were held in Sweden capital, Stockholm, on May 5, 1912. As I already mentioned, these were the first Games that gathered participants from five (Sun symbolism, series 5, Sun ruling the fifth Zodiac sign, Leo) continents, but also the last Games that awarded the pure gold medals (symbolism of exalted Sun). Let us take a look at the position of tertiary Moon (it moves 1° in two days) of Sweden for the day of Games opening. It is exactly 19° Aries, which only additionally confirms the significance of this degree for this Scandinavian country. 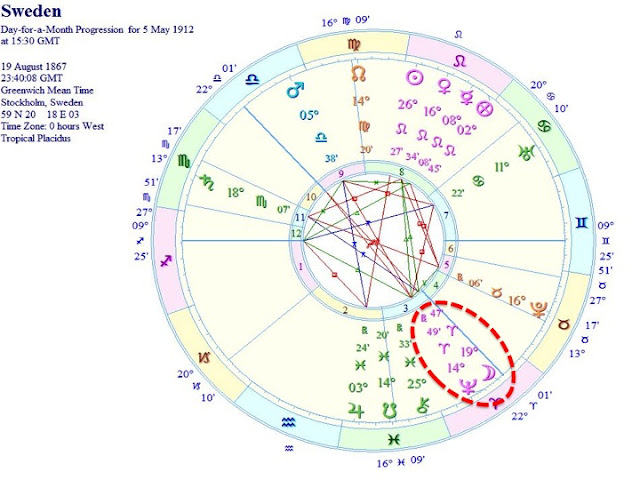 Victoria, the Crown Princess of Sweden 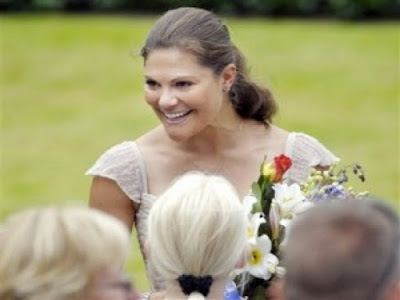 We find 19° Aries also in the chart of Swedish Princess (the future Queen of Sweden), because her Node axis goes across 19° Aries/19° Libra, being identical to Node axis in the chart of Sweden, so it is obvious that this young woman will have very significant role for the future of her country. If we look at her Moon (people), we find it in the emotional sign of Cancer, and in applicative square to Pluto (war, danger), so this is not a favorable sign for the country that was not in a war for a long time and that is mainly neutral in other world conflicts. But, since this Moon takes the Sun at 22° Cancer to 9 (abroad) out of 10 (she as a ruler), then this might imply the "engagement" of Sweden in some conflicts out of its territory. To tell the truth, Sweden participates in numerous war and peace missions in Kosovo, Bosnia and Herzegovina, Cyprus, Afghanistan, and it has developed military industry, exporting its products. Anyway, in such situations it would be wise to do as ancestors (Southern Node) once did, remain neutral and self-aware, and not see the one in front of you as an enemy or danger (19° Aries). 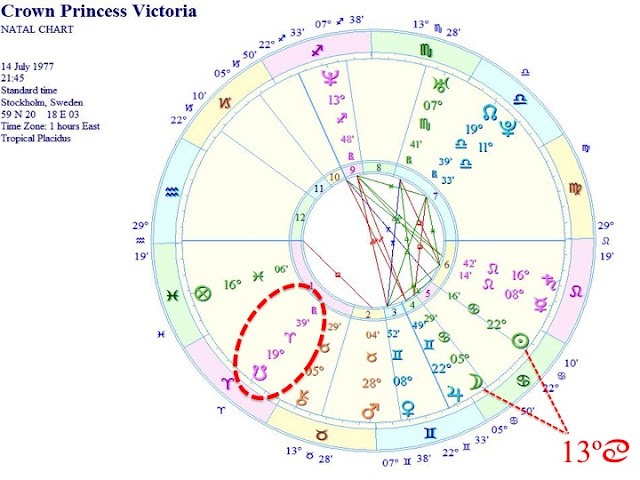 Well, what is really interesting here is the following: Victoria has Sun (ruler)-Moon (people, and here the Moon rules 8th and 9th from 10 - conflicts abroad) midpoint at 13° Cancer 53', on the Sun (the President) of United States, while the Moon (people)-Mars (conflicts) midpoint in Sweden chart is at 12° Libra 49' (almost 13°), and all that will be activated on April 21, 2014 by the Grand Easter Cardinal Cross across 13°. It will be the fifth Uranus-Pluto square that will activate the fifth, throat, Mercury chakra, so there is the need to change the attitudes and beliefs, in order to have the conditions before us changed…

The very ascendant of Sweden at 26° Gemini and close to stars in Orion constellation that is directly connected to United States, indicates the strong relationship of these two countries. There is data that between 1850 and 1910 more than one million Swedes left Sweden for United States.

At the time of the fifth Uranus-Pluto square, secondary Mercury of Sweden (the ruler of ascendant in Gemini, so it describes the situation in the country) will be exactly at 19° Aries, on the South Node (ancestors) from the Sweden natal chart. Will here ancestors "silently ask" their country to remain neutral regarding the conflict somewhere in the world? It remains to be seen, but this could easily be the picture of "engagement" of otherwise neutral Sweden in some conflict in the world… 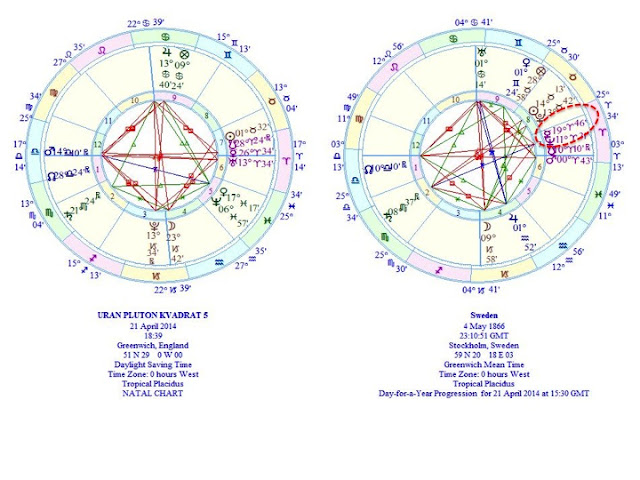 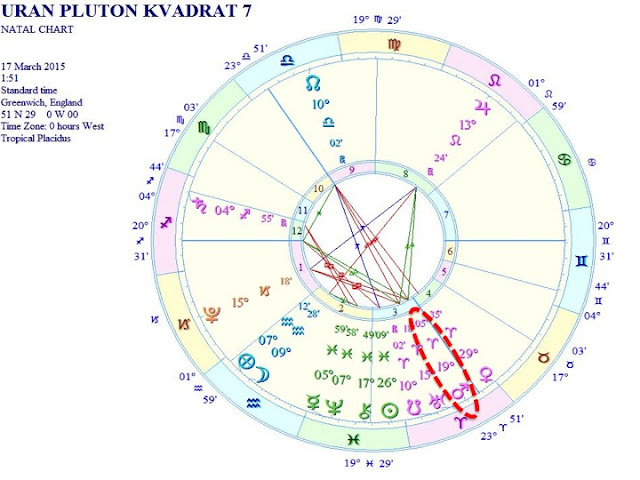 In the chart of Princess Victoria, there is Jupiter-Mercury midpoint at 15° Cancer. These two planets rule her 10/4 axis, which is the axis that represents her as monarch (10) and everybody across her, i.e. her diplomatic relations. Since the seventh Uranus-Pluto square happens on March 17, 2015 across 15° Aries/Capricorn, we conclude that it will "affect" 15° Cancer, i.e. Jupiter-Mercury midpoint from the chart of Princess Victoria, and that can bring a big change in the field of diplomatic relations. The apex of the T-square is Uranus at 15° Aries that goes across Mars to 19° Aries -- the degree that we connect Sweden to, but who will form the applicative trine with Moon at 9° Aquarius (that brings 15° Cancer), so we may conclude that the result of the change will be a new, more humane (Aquarius) beginning…
The upcoming part of article I added on 27th February 2022, during Ukraine/Russia conflict 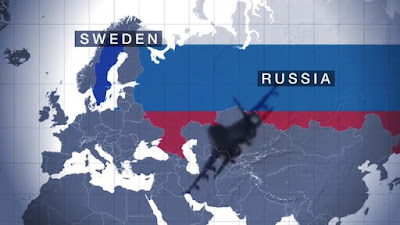 If we comparing Sweden with Putin's chart we can find Sweden, as well as Vladimir Zeleneskey, both, Sweden and Zeleneskey, have the same Moon (people) at 17° Leo which means that Putin as much as he is a hard karmic lesson for Ukraine, he may be the same for Sweden. For now, Sweden is not in NATO, but there are rumors since Putin did invasion on Ukraine how Sweden and Finald may join NATO. However, Putin could easy 'eat' Sweden (on the same way as Ukraine - read my article on Putin/Zeleneskey synastry here), as his South Node together with his Pluto are sitting as Sweden's Moon. Also, NATO has its Pluto over Sweden's Moon. In my article on Ukraine/Russia I described deeply what means Putin's South Node over the Moon of the President of Ukraine, Zeleneskey.Why there is karmic relationship, karma of loss for Zeleneskey. The same may be with Sweden in a time ahead. So, in case Sweden shows some tension regarding Russia, Putin may start easy to hurt this country too, regarding its theritory and people. NATO could easy push Sweden into big pain if Sweden decides to join, because Pluto of NATO is at Sweden's Moon. The best would be for Sweden to stay neutral!
I would add that I mapped Russia at 19° Libra (read here), across 19° Aries (Sweden ), Putin's natal Uranus, ruler of his natal 4th (theritory) is at 18° Cancer, squaring axis of lunar nodes of Sweden too. On 9th January 2022 retro Venus met Sun at 18° Capricorn, making inferior conjunction and opening the door for 2years and a half ahead where some not so nice things between Russia and Sweden may explode. It could be very dramatic as there are not finishing things from past past lives between Putin and Sweden. Secondary progressed Moon of Sweden is at 26° Aries, and about this degree you can read more in my article Russia and 19° Libra, where I am speaking of the importance of the nebula star Vertex, from Andromeda constellation (Chained Princess). People in Sweden may feel right now (end of Feburary beginning of March 2022) like they are also somehow in chains. Putin's natal Mars 26°  OOB (out-of-bounds) is sitting at Sweden's Desc, making oppositon with its Asc, which is generally feeling that someone is always somehow ready to spread fire over you. I would watch on time between 18th March - 1st May 2022, and within that period on 18th March, 27th April 30th April, when we are going to have one big activiation of 27° of mutable signs which opens doors for Trojan War. Here you can read my article Troy and 27° Pisces. Also, secondary progressed Asc/Desc of Sweden is right now over 8° Libra/8° Aries, and Russia has its Mars (war) in its 8th house (wars) at 8° Aries.
The current Prime Minister of Sweden, Magdalena Andresson, was born on 23 January 1967, Upsala, time-unknown, has right now in her progressions secondary progressed Sun at 28° Pisces, so she will be under global Trojan War vibe also between 18th March - 1st May 2022.
The Solar eclipse on 30th April, at 10° Taurus over Sweden's Pluto in 12th, opposite Saturn (ruler of 8th (wars) and 10th (reputation of country) at 8° Scorpio in 6th (army), and the Lunar one in mid May 2022 over Venus' 26° Scorpio in the chart of Sweden, in its 6th house (army) may bring big shifting of energy and Sweden may get involved into conflicts with Russia somehow too.Pluto is ruler of intercepted Scorpio (war) in Sweden's 6th house (army).
The last war between Russia and Sweden was started in June 1788.
у септембар 05, 2015