Central (15°) degrees of the fixed signs (Taurus, Leo, Scorpio, Aquarius) are known as so-called "Avatar degrees" because they form 45° (semi-square) with 0° of cardinal signs (Aries, Cancer, Libra, Capricorn). These are very intriguing spots within Zodiac, in the sense that countries that "vibrate" at 15° of fixed signs surely have the tougher road.

Five hundred years under the Turks

Since I live in Serbia, the country that is said to be the "Balkan powder keg", it was extremely important for me, as mundane astrologist, to map my country within the Zodiac. The research I performed brought me to the very 15° Leo, the "Avatar degree", the central, "royal", degree of the royal sign of Leo! Since my country has been under the Turk government for 5 hundred years, and since I have recently mapped Turkey to 0° Libra (more about this you may read in my article Turkey and 0° Libra), I decided that it very much makes sense to place Serbia at 15° Leo, because it is 45° (semi-square) from 0° Libra (Turkey)! Also, in its history Serbia has been a Kingdom of Serbia, which correlates to 15° ("royal", central degree) of the royal sign of Leo. 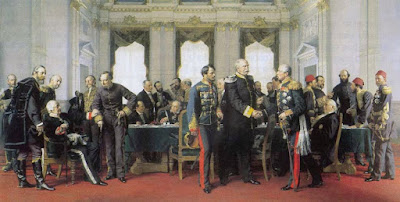 But, let us start from the beginning. Serbia got its independence at Berlin Congress (July 13, 1878) and horoscope for that moment is one important point in time that should be used when talking about Serbia. Since the South Node (losses) in this horoscope is at 14° Leo, which is very close to 15° Leo,  then it becomes clear why Serbia got the tougher road… But, talking about the South Node, it always means there is the chance for change, because the symbolism of the South Node is analogous to the series 11 which "offers" the change, after which the liberation comes… But the very ruler of the 11th sign -- Aquarius, the Uranus is in Leo in exile, so the changes for the Serbs also represent the kind of problem… 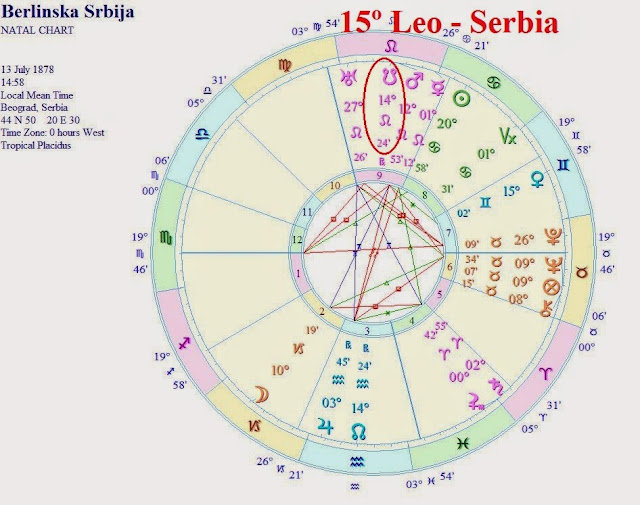 Sun in Leo (consciousness of Myself, King) is strong, but here the Uranus (planes, bombs) is in exile, so the capital of Serbia, Belgrade, was bombed five times in its history. Neptune (faith) is also in fall in Leo, so Serbia also had the part of the history when it denied religion (time of communism, Josip Broz Tito), but it could not go on forever, since Uranus (communism) in Leo is in exile, as I already mentioned. Today the Church is very present again and there are many so-called "new believers" who actually do not know what they believe in because they do not see the reality. Serbia obviously has a problem with responsibility, accepting the truth and the need to continue living in the past (Saturn is in exile in Leo).

So, the Sun (the king, rulers) is the strongest in Leo, but since the South Node (losses) in the chart of Berlin Serbia is close to 15° Leo (Serbia), then it is clear why Serbia kept losing its kings and rulers (the murder of Karadjordje in early history, then the May overturn in 1903 when king Aleksandar Obrenovic and his wife Draga Masin were murdered, the murder of the Serbian king Aleksandar Karadjordjevic in Marseilles in 1934, and in recent history the murder of the first Serbian democratic prime minister Zoran Djindjic in 2003).

Taking all into account, Serbia should be working on accepting the truth and taking the responsibility, and not on defying the change; on the faith, but the inner, personal one that has nothing to do with religion imposed by the institution of the Church. Serbia should see the Beauty in every Truth, and should not create scenarios by self-projecting (Neptune in fall) and should not make bad judgments. Saturn in Leo is weakened, so we as a nation should stop judging everybody else around us, and focus truly only on ourselves and our interests (Sun in Leo)! Otherwise, we miss opportunities, lose time, live in the "dark" for we choose so…

The Sun is strong here, but there must be no ego in the negative sense, we need to become aware of who and what we are as nation, and we need to use the conjunction with the South Node (the past) as a positive thing, by returning to our roots… To put it simply, we should learn to love ourselves, to dive deep in ourselves and "release" the self-assurance from the South Node (the past). Self-assurance implies the existence of love, most importantly for ourselves…

Is the return of monarchy Serbian salvation? Possibly… It does not have to be the absolute monarchy, but surely the very institution of the King would improve the reputation of Serbia in the world… (in the chart of Berlin Serbia, the Venus -- diplomacy is at 15° Gemini, in the 7th house -- foreign relations, and in sextile with 15° Leo).

In any case, 15° Leo only confirms that Serbia always needed, needs and will need the strong leader, strong male figure that would lead the country, but who would use the symbolism of the South Node (the past) in the positive sense and make the turn.

In the spring of 1903, more precisely on May 29, 1903, the king Aleksandar Obrenovic and his wife, the queen Draga Masin were killed. In that moment progressive Sun (king) of the Berlin Serbia was ay 14° Leo 44' (close conjunction with 15° Leo, "avatar degree"), while progressive MC was at 0° Libra, which is mutually the semi-square aspect (45°), and what surely emphasizes the possibility of some tension within the country. This act resulted in the return of the Karadjordjevic family to the throne of Serbian monarchy. 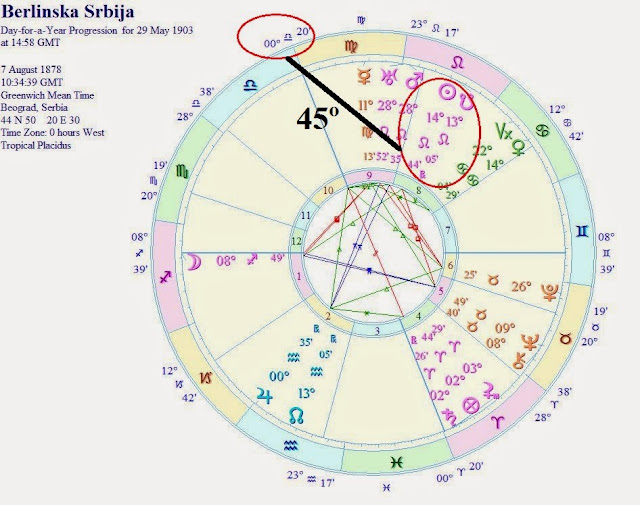 In Solar Arc directions of the Horoscope of the Kingdom of Serbia, the cusp of the 8th house (death) is at that time at 14° Aquarius 48' (very close to 15° Aquarius), which also moved 15° Leo (Serbia) by opposition! 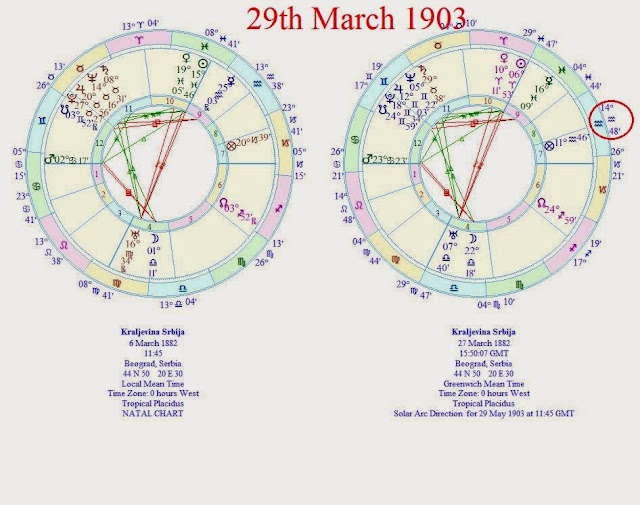 It is well known that the trigger of the World War I was Sarajevo assassination on June 28, 1914, when the member of "Mlada Bosna" organization Gavrilo Princip, the Serb, assassinated Austrian-Hungary Archduke and his wife. After that, Belgrade was bombed on July 15, 1914. Solar Arc Moon (the people) of the Berlin Serbia horoscope was at that moment at 14° Aquarius 47' (planes), very close to 15° Aquarius (also "Avatar degree") in opposition with 15° Leo (Serbia). The following year, October 6, 1915, Belgrade was bombed again in World War I. Then, Solar Arc Moon (people) was at 15° Aquarius 58' in opposition with 15° Leo!

But, this was not the first bombing of Belgrade. Before that, on June 5, 1862 the Turks also "spilled the fire" on Belgrade. 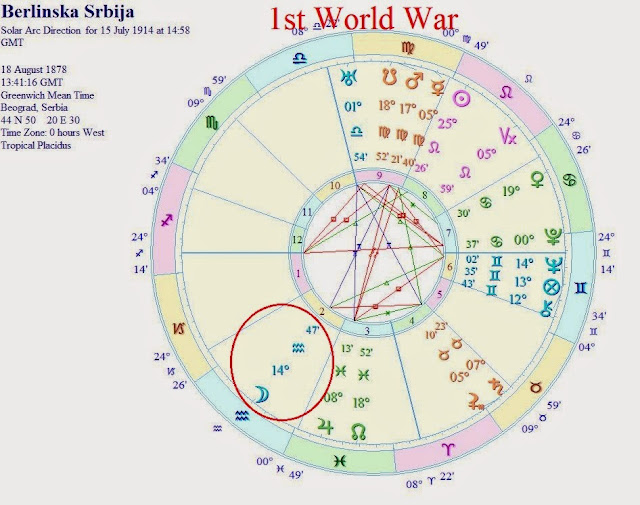 King assassination in Marseilles in 1934

In October 1934 the King Aleksandar Karadjordjevic was assassinated in Marseilles. Secondary ascendant (situation in the country) of the Kingdom of Serbs, Croats and Slovenians (KSCS) was exactly at 15° Leo! 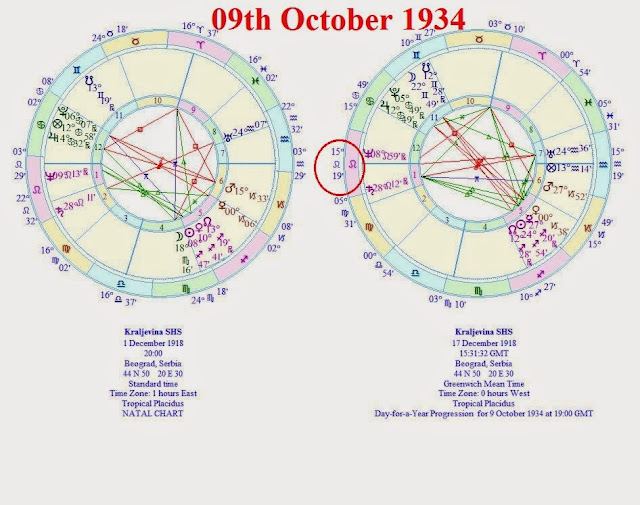 The World War II followed and Hitler bombed Belgrade on April 6, 1941. Solar Arc Venus of the Berlin Serbia horoscope was at 15° Leo! Venus in the horoscope of Berlin Serbia is the ruler of the 7th house (everybody standing across Serbia, foreign relations), but also carries the Pluto from Taurus (ruler of the ascendant -- Belgrade, the capital), as well as Chiron (the wound) from Taurus.

During World War II Belgrade was also bombed by allies on April 16, 1944. 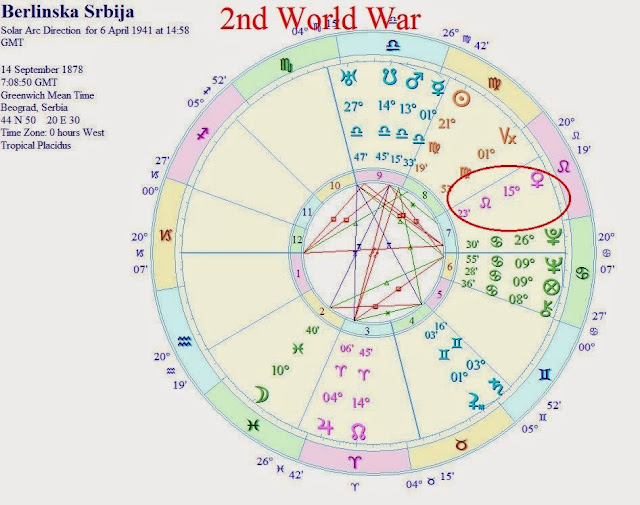 The last bombing of Belgrade happened in recent history, on March 24, 1999 by NATO. Progressive Sun of the Federal Republic of Yugoslavia was between 14° and 15° Taurus during the NATO strikes, which is also the "Avatar degree", one in square with 15° Leo (Serbia)! 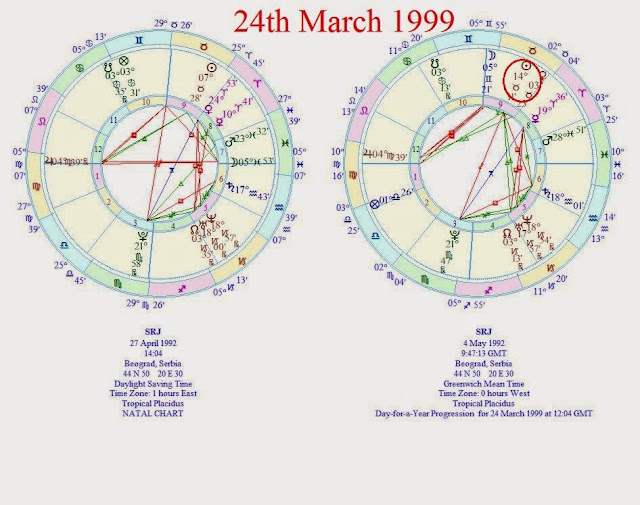 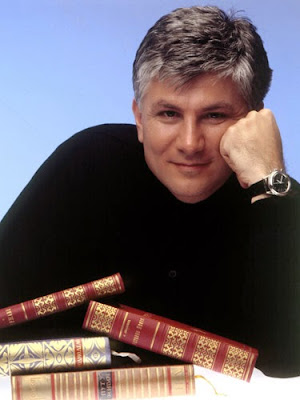 In January 2001, after the October 5th Revolution in 2000, Serbia got the first democratic Prime Minister. Zoran Djindjic came to lead Serbia. But, secondary Venus of the Berlin Serbia was at the same position as natal Mars of Zoran Djindjic, at 15° Scorpio (also "Avatar degree"), square to 15° Leo (Serbia), so this was the sign that the road to change will not be easy and that some things here may be interrupted in the middle, because the Venus from the Berlin Serbia chart carries also Pluto (death, danger), as well as Chiron (wound). Only two years later Zoran Djindjic was assassinated in front of the Republic of Serbia Government building -- tertiary Sun (the Prime Minister) of Berlin Serbia was at 15° Aquarius! In his natal chart Zoran Djindjic has the cusp of the 8th house (death, danger) at 15° Taurus ("Avatar degree"). As we can see, the Grand Fixed Cross was activated through 15°, which is very daring and very painful… 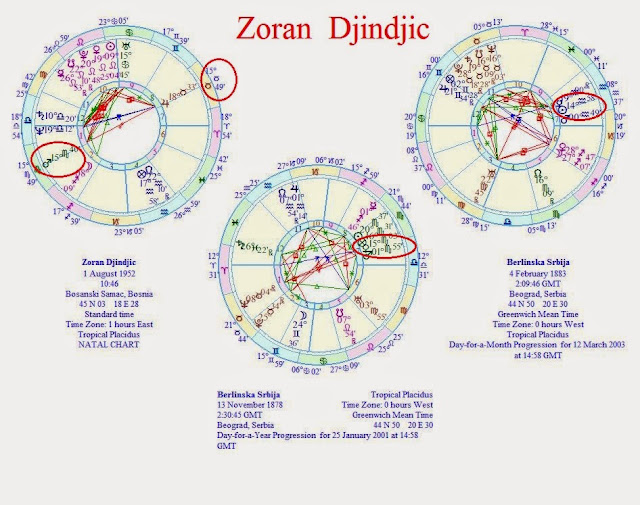 Horoscope of the present Serbia

In the horoscope of the present Serbia (which is the moment the Constitution was brought in 2006 -- November 8, ASC 3° Aquarius) the Sun (the ruler) is positioned at 15° Scorpio ("Avatar degree") and makes the square with 15° Leo (Serbia), which only emphasizes again the significance of these degrees for Serbia.

Former Serbian President, Boris Tadic, has in his natal chart the ruler of the 10th house (him as the President) at 15° Aquarius, which activates 15° Leo (Serbia) again.

When Serbia got the status of the EU Candidate State on March 1, 2012, 9th house (abroad) of the late Prime Minister Zoran Djindjic was at 15° Leo in Solar Arc Directions, emphasizing the credit of this very man for candidacy status of Serbia. 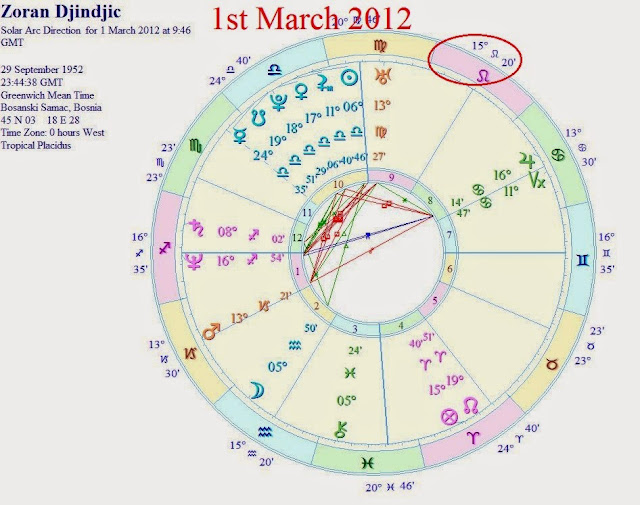 It is interesting that this year Serbia has a secondary 1/7 axis across 15° Aquarius - 15° Leo, which might indicate very important year. Since the election year is 2016, this might mean elections could be held even in 2015, i.e. is it possible to have early elections in Serbia? It remains to be seen…

On the other hand, in Solar Arc directions of European Union, this year the Moon (some woman from EU government - because in the EU horoscope the Moon - woman is placed in the 10th house - government) is at 15° Gemini, which supports 15° Leo (Serbia), so this is the good opportunity for Serbia to easily (sextile) be in harmony with European Union. This is also the year when Serbia took the presidency of OSCE, which is also a big step forward for our country.

If we take a look at the horoscope of Kosovo, then for this year in Solar Arc directions there is Mercury (negotiations) at 15° Aquarius, which also activates 15° Leo (Serbia), so this is also the sign that things will not be easy here as well… But, since the last, seventh square of Uranus-Pluto at 15° Aries - 15° Capricorn is still before us, Serbia should see this as the chance and use 2015 for changes (sextile with Uranus at 15° Aries) that may follow only if we transform from within and let go of history and past (quincunx with Pluto at 15° Capricorn), for Pluto is the spot where everything disappears, but also the spot where everything becomes after everything has disappeared… 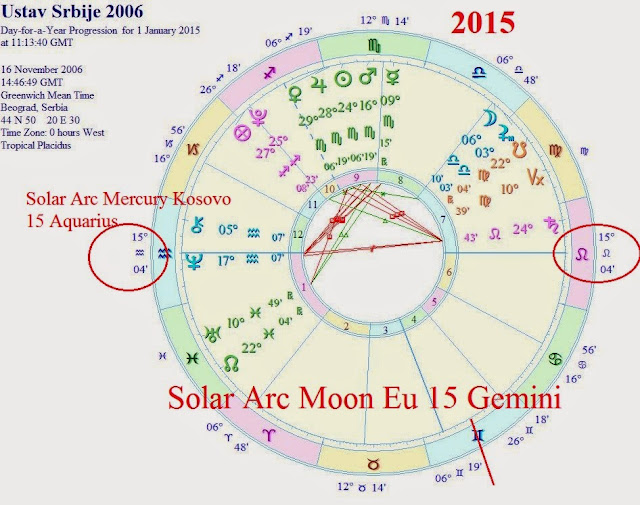