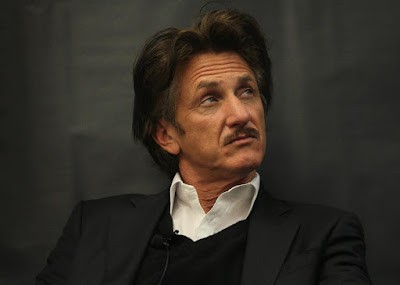 According to rules of traditional astrology, the first house is ruled by Saturn, the second by Jupiter, the third – Mars, the fourth – Sun, the fifth – Venus, the sixth – Mercury, the seventh – Moon. This is so-called Chaldean system and the planets are distributed from the slowest (Saturn) to the fastest (Moon). From the eighth house it starts again with Saturn, the ninth is ruled by Jupiter, tenth by Mars, eleventh by Sun and twelfth by Venus. As in modern astrology, there is the notion of exaltation in traditional one – here we say the planet is “joyful” to be in certain house. The first house is the “house of joy” for Mercury, the Moon is joyful in the third house, the Venus in the fifth (which is its domicile at the same time), Mars is joyful in the sixth, the Sun in ninth, Jupiter in eleventh, while the Saturn is joyful in the twelfth house (which is, from the point of view of modern astrology, the house of Venus’ exaltation, so we may conclude that where there is love, there is no place for fear).

The horoscope of Sean Penn caught my eye because it is very significant from the point of view of traditional astrology. But, I love to combine traditional and modern astrology for I believe they “work” just fine together. 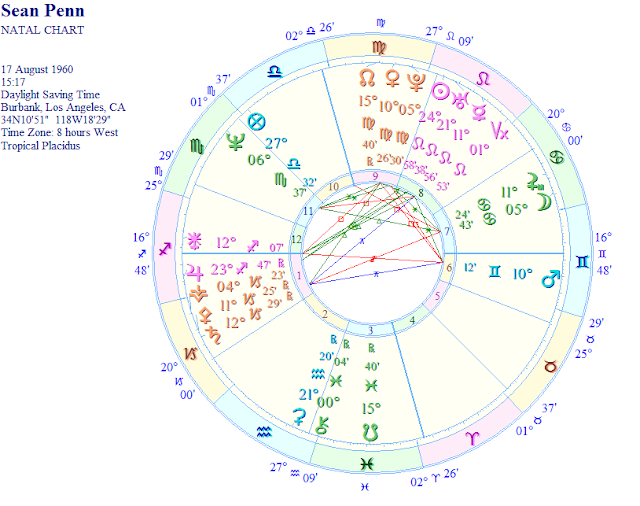 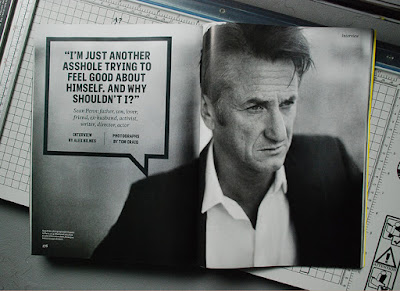 Sean is Leo with Ascendant in Sagittarius. In his first house there is Jupiter – the ruler of his Ascendant, but also the Saturn, so we may say that Saturn here is at home, in his surroundings. Saturn is additionally strengthened by being in the sign of its domicile, the Capricorn, but it is also retrograde, which is “normal” from the point of view of modern astrology, since mythological Chronos is half goat-half fish, which is that retrograde part in him that modern astrologers attribute to Neptune, the modern ruler of Pisces. So, when there is retrograde Saturn – it should not be taken as handicap, for it is about mythological Chronos. On the other hand, two most important chronocrators are Jupiter (ruler of space) and Saturn (ruler of time), and in Sean Penn’s chart they are in the first, angular house, which puts additional emphasis to them. When I am about to give prognosis, I always first look at those two chronocrators, for the usual man, the man of the average consciousness cannot always “live” transits of modern planets -- Uranus, Neptune and Pluto, for those planets require higher consciousness..

Let us now go back to the horoscope of Sean Penn. The ruler of his 7th house is the Moon, in 7th, where it should be according to rules of traditional astrology. Like Saturn, his Moon is in domicile, in Cancer. So, there are two strong indicators of traditional astrology: Saturn in 1st house (as the ruler of 1), the Moon (as the ruler of 7) in 7th house. Of course, it must be noticed that the Moon and the Saturn are in a strong, applicative opposition, which is not an easy aspect, but since both planets are in domicile and in their houses (according to traditional astrology), I would say that Saturn transits in relation to the Moon are very important for Penn, and those are conjunction, square and opposition.

Furthermore, the Saturn is the tip of the Yod with Mars in Gemini in 6 (which is the house of joy for Mars according to traditional astrology) and Mercury in 8. Mercury in 8 has no dignity, 8th house is not any planet’s house of joy, and the 8th house is ruled by Saturn, and here we can see Mercury “carrying” within the Mars from Gemini and the Venus from Virgo. Mars and Venus are natural signifiers of love relationship. The Venus is subconscious planet, and Mars is unconscious one. So, Penn has Yod, and every Yod has the nature of Chiron, and there is a wound, something to be healed, and I would say it is in the area of relationships. But, his solution is the planet directly across the Saturn, and it is the Moon at 5º Cancer, and that place is in astrology called “Boomerang“! So, Penn’s Moon in 7, as the ruler of 7 – is the solution! I would say that Penn has to have wife, marriage, family. He is deeply emotional man, full of empathy, intuitive. All work in this life should be directed to emotional side of personality. But, the Moon also represents the mother, so the position of the Moon in 7 is certainly depiction of a mother who is in public - Eileen Ryan Sean Penn’s mother, American actress who appeared in numerous movies and TV series.

I wish to add that Penn has very strong Sun (father) in Leo, in its domicile, and almost at the cusp of 9th house (which is the house of Sun’s joy in traditional astrology). Sean Penn’s father was the famous Leo Penn – American actor and TV director. Even father's name is fitting with his Sun in Leo! 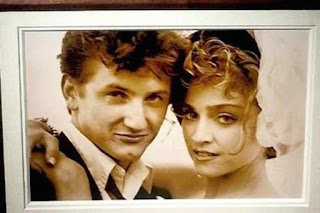 In February 1985, Penn met Madonna at the filming of her spot “Material Girl” (which is in accordance with his Venus in Virgo conjunct Pluto). On August 16, 1985 they got married. The divorce followed in 1989 when the transit Saturn had the first opposition with Penn’s natal Moon in 7 (marriage, wife), i.e. when it came to 5º Capricorn! It happened immediately before his first Saturn return. But, then he also met his second wife, actress Robin Wright, with whom he got two children, the family. 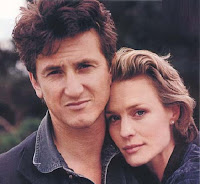 The marriage with Robin happened in 1995/96, seven years later (7 is the number we relate to Saturn), when transit Saturn from Aries squared natal Moon in 7. His first Oscar nomination was in 1995 for the movie “Dead Man Walking”. He did not get Oscar, but the same movie won best actor prize at Berlin Film Festival. Before that, in 1993, Penn lost his house (Moon in Cancer, as Boomerang in the mentioned Yod configuration) in fire.  Mars (fire) falls in Cancer!

Let us now go back to 1974, when transit Saturn came for the first time to Penn’s natal Moon in 7. It happened on June 9, 1974. At the end of that year, or more precisely on December 4, 1974 Penn appeared in 112th episode of the famous series “Little House on the Prairie”, directed by his father, Leo Penn. 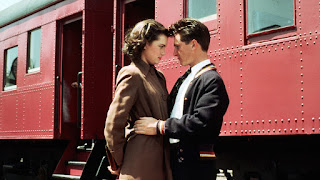 The first square of transit Saturn with natal Moon happened at the beginning of November 1980. During the interval between the first square and the first opposition with the natal Moon (1989), Penn was engaged with Elizabeth McGovern whom he met at the filming of the movie “Racing with the Moon” in 1984. Then he met Madonna in 1985, and married her in that same 1985, divorced her in 1989, and met his second wife. When Saturn came to 0º Libra for the second time during his life, on July 22, 2010 (the first time it happened in November 1980 - 30 years ago), and was about to square natal Moon at 5º Cancer in  7 – Penn divorced his second wife Robin Wright.

The next interesting moment will be the following: On February 9, 2018 transit Saturn will oppose Penn’s natal Moon for the second time in his life. In 1989, 29 years ago, Penn divorced Madonna. This is often depiction of someone from the past returning into one’s life, and maybe even Madonna herself, since these two were seen in public together… But, the Moon is also the mother, and Penn’s mother is still alive, so this might be challenging moment for her, since she is 88. Penn’s father died on September 5, 1998, after solar eclipse at 28º Leo that happened in August of the same year, so it was 19 years ago. Penn’s Sun (father) is almost at 25º Leo, and I take the orb of ±3º for eclipses (sometimes even 5º for Sun and Moon). As eclipse on Penn’s Sun happened again in August 2017, this might be important sign for him in the following period, but also for his family, family he came from, his “mystic river” called genetics, his mother who is still alive, for in traditional astrology the Sun is ruler of 4 (family). 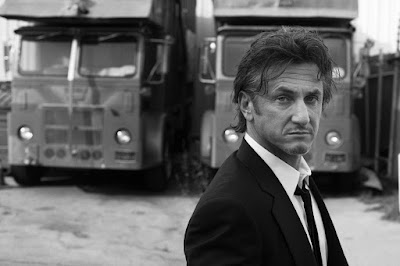 Astrology is simple, and the more simple approach we take in interpreting charts, the sooner we reach beauty and simplicity in predictions. There are cycles, there is the time (Saturn), and Saturn will always give us if we were the Truth previously. It is obvious that the main task for Penn is work on relationships, he enters relationships to end them, because it is the call of the past (Saturn), and he has some “cleaning” to do there. This will be the second Saturn return for him, and now things are different than in 1989 when he had his first divorce, if he learnt something during that time – future relationships may last longer this time, and some might survive through time. It is also obvious that so far he lived his Truth through his professional life more than through the personal one, but during 2018 he will have the chance to show himself what he learnt in the meantime. With the good Saturn in 1 and the Moon in 7, he certainly has the potential to make the relationship permanent in time. Finally, from the point of view of modern astrology the Saturn is exalted in the seventh sign, the sign of Libra, which corresponds to the 7th house in every chart (marriage, relationships). What is it we should strive toward through relationship? Lasting in time, and it shall last only if we were the Truth to ourselves from the beginning, because the partner is only our mirror, he/she – does not exist!

Since the Moon is the Boomerang, the strongest transit for Penn is its conjunction with Saturn – which brought him the first Oscar for the movie “Mystic River”. The whole cycle from the first conjunction of transit Saturn with natal Moon until the second return of transit Saturn at 5º Libra (square to natal Moon at 5º Cancer) has been the most successful one for Penn, for it brought the second Oscar for the best leading role in the movie “Milk”.

During that period (2003-2010), Penn got engaged in intensive humanitarian work and politics. Moon in Cancer should always be opened, without fear, full of optimism, and then relationship will come as the consequence of all that. When I say relationship, I refer to relationship that will last in time (Saturn, Capricorn is across from Cancer)...

To advise the Moon in Cancer to close its heart and not empathize with suffering of others is to like to tell the river not to flow anymore… Naturally, it is required to use that sensitivity and empathy as – intuition. The Moon in Cancer is depiction of genetics, and genetics is our river, and there are things in there, memories live there, and those memories color our emotions, and emotions are not ours, but only the memory… And when we become fully aware of that, we become “emotionally light” and every relationship gets that lightness as well...