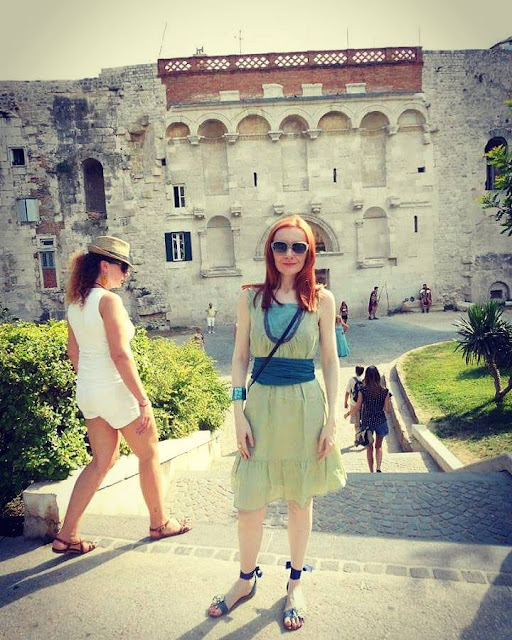 There is a  one place where I felt the spirit of „The Gate Keeper“. For this place, they use to say it is the center of the world. In my mundane work („mapping Zodiac“ by „sensitive degrees“) I found that Split is „sensitive“ on axis 15º  Capricorn/15º  Cancer (Jupiter axis) and that it may have some vibration at 29º  Cancer too (the place of our 3rd Eye-Jupiter chakra). This is the place in the world where you can find four gates! There are: The Golden Gate (northern), The Silver Gate (eastern), The Iron Gate (western) and The Bronze Gate (southern). Since Split is famous for being once part of the Roman Empire, the horoscope of Ancient Rome ("The Book of World Horoscopes" by Nicholas Campion) was my starting point.

For me every gate we can link with 29 º  of some sign. After all, in the chart of Ancient Rome, there is retrograde Venus at 29 º  Pisces, and I am writting this letter in the moment when she is crossing again over 29 º  Pisces, she is direct but she is still in her „shadow period“, and I would say this is a very special moment.  I think that The Gate Keeper „vibes“ over axis 29 º  Pisces/29 º  Virgo, because after 29 º  Pisces we get 0 º  Aries – the beginning of Zodiac. At 0 º  Aries we open the door, we accept life! Accross, at 0 º  Libra we start to judge (Saturn is judging, and Saturn is exalted in Libra)! But at 0º  Libra we have in Sideral Zodiac fixed star Spica, and in Sideral Zodiac all start from this point.  However, i did progressions of Ancient Rome for the moment when I was born (January 30th, 1980) and i found progressed Moon at 9º  Aquarius, in conjunction with my natal Sun, ruler of my North Node at 29 º  Leo! For me that was a big sign, I will tell you later why.For now, I will just tell you that my axis of nodes goes over 29 º  Leo (NN) / 29 º  Aquarius (SN), and on May 12, 2017 I am going to have my nodes return day, which is speaking about new cycle of 18 years ahead! Also, i found Solar Arc axis IC/MC of Ancient Rome for the moment when I was born over 0 º  Aries/0 º  Libra. So, the gates were open in the moment when i was born, it seams...
29º  Taurus/29 º  Scorpio – The Silver and The Iron Gate In Split

My first touch with Split occurred at the time of my Solar Return in 2015. At the very moment of the Solar Return I found myself in the Jupiter Temple. It was followed by meditation for the Jupiter chakra ("Third Eye", our sixth energy centre located at 29º Cancer, which is the cusp of my 9 house - my purpose, my future life). For me, Split has a special energy in the spiritual sense, it is the place where I find myself in some sort of internal alignment, since the Moon in my horoscope is positioned across the zodiac, at 15 º   Cancer, the degree of  Jupiter exaltation. All this includes my Venus at 16º Pisces 52’', with the fixed star Ahernar (from the constellation Eridanus) which is very spiritual by nature, and that contributes that in this city I enjoy, I feel pleasure, since it solves the opposition 15º  Cancer / 15º Capricorn. Without a doubt, Split is so important for me in a spiritual sense, it is a place where I can easily make contact with my future life, “my future ME“! My tertiary axis 3/9 (trip) went over 29 º  Taurus/29 º  Scorpio. Later i found that this axis presents The Silver Gate (eastern) and The Iron Gate (western) in Split! Also, my tertiary Fortuna (the most faster point and we should take it in predictions because it moves faster even than Moon) was also at 29 º  Scorpio!!! The Silver Gate were under reconstruction between 1932-1934.Solar Arc axis Asc/Desc of Ancient Rome in 1932 was over 29 º  Scorio/29 º  Taurus. For example, when Pope John II visited Split and went throught the Silver Gate in 2000 – Solar Arc Fortuna of Ancient Rome was at 29 º  Scorpio! I will mention progressed Sun of Ancient Rome for that moment too.Why? Becase it was at very powerful place within the Zodiac-at 3º  Scorpio (this degree I link to Croatia, and Split is the city in Croatia), and that degree i link with Pluto exaltaion degree and at the same time we know that it is the Moon’s fall degree. Where is the life weak-the death is the strongest. The death is not the end, it is the  new beginning. So, it seams that when we close some gate (door), some new we open at the same time.  If The Silver Gate is eastern part, than accross we have western part, and The Iron Gate is western part. So,  I would say that axis 29 º  Taurus/29 º   Scorpio is axis for silver and iron gates in Split. At 29 º  Scorpio we have the end of the end, the end of the darkness, the end of the death. Accross, at 29 º  Taurus, we have so called „Weeping Sisters“ (Pleiades) in mythology. IAM-Infinity astrological magazine since 3rd April 2017 has its progressed Sun at 0 º  Gemini, just finishing crossing over 29 º  Taurus! So, one gate we closed? But also, we open some new gate? Over 0 º Sagittarius/0 º Gemini we are able to touch some new story, we are able to touch much more light... 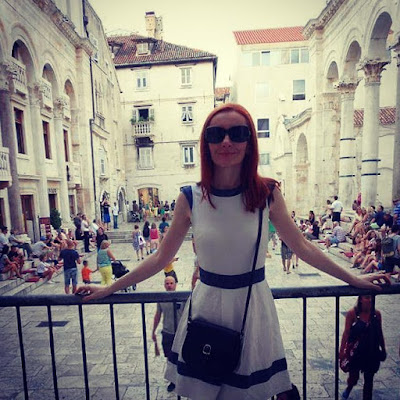 As I've never felt myself like I "keep" my parents inside, since the axis 15º Cancer / 15º Capricorn is very important for me. In fact, when my father died (on 06th April 1996) Jupiter was at 15º Capricorn, while on the day of my mother's death, 06th September 2013, Jupiter was opposite, at 15º Cancer. I could say that my parents took me on this trip, all with meaning and purpose. Finally, the dates of their deaths is associated with the symbolism of Jupiter chakra - both died on the sixth day in month! Split is essential for my spiritual growth.

I fell in love with Split, and its famous restaurant Lvxor at Peristel became my favourite place. After three months, I found myself again in Split where I gave a public lecture about Croatia with a special emphasis on Split and 15º Capricorn.(April, 2015-my secondary Moon was at my natal Pluto). Pluto is ruler of my Scorpio rising, and you can see my Pluto at 21º  Libra, in conjunction with fixed star Spica (I have already mentioned Spica in the beginning of this letter). The lecture was held on April 26th, 2015 and, as tertiary progressions can describe an event to the level of two days, I looked at the tertiary position of the Moon for that day. As you can see, tertiary Moon (moves 1 degree for 2 days) was found precisely at 15º Capricorn (the degree of Jupiter’s fall). If I add that in my natal chart the Moon is in 8th house, in applying square with Pluto –than you can imagine what there may happend to me. It was really spiritual journey for me, where my life in one moment was in dangerous. I fell down  the stairs in the center of Diocletian Palace, but somehow, all went well. I trust in the God’s spirt there, after all my Moon is at 15 º  Cancer (God) and some spirit protects me, always... 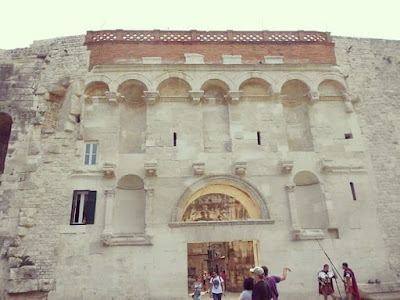 As I said The Diocletian's Palace has four main Gates: The Eastern (or Silver) Gate on the opposite site of the main East / West walkway known as the Decumanus; the Southern (or Bronze / Honey) Gate facing the sea, and Northern (or Golden) Gate facing the North, linking the Palace to the town of Salona during ancient times. And Western (or Iron Gate of Split), Known as Porta Franche, it was the door of last resort. Criminals seeking justice, refugees seeking asylum - would come to its gates. There, in a location between the inner and outer doors, court would be held and their fates would be decided! Those who were allowed to stay were given refuge, and their lives would be spared.

Porta septemtrionalis is the Roman name for The Golden Gate (northern) in Split. Emperor Diocletian walked through them as he entered the Palace on the 1st of June 305. They were built in the shape of a rectangle, with double doors, as part of the defensive military tactics (propugnaculum).I found progressed Venus of Ancient Rome (for 1st June,305) at the end of Aries, 29 º  Aries. For example, my sister has Sun/Mercury conjunction in her 12th house (death in past life) and her Sun is the ruler of her South Node (past lives) in her 5th house (house of past life) - I took her in Split with me two years ago when at 29 º  Aries was my progressed Venus (sister) – august 2015. Also progressed axis IC/MC of Ancient Rome on 1st June 305 was over 29 º  Leo/29 º  Aquarius (which is my axis of nodes in my chart). At 29 º  Leo when I was born there was one of the royal fixed star, „The Keeper of North“ – Regulus. So, the most important gate in Split is The Golden Gate, and I would say it may „vibe“ at 29 º  Leo,from the heart of Leo. Accross, at 29 º  Aquarius, we have The Bronze Gate (southern), the smallest of all the gates and this gate brings us into the basement of Diocletian Palace. After 29 º  Aqarius, we touch 0 º  Pisces, which may be an image of basement. After all,I visted Diocletian’s basement in order to find out what is the secret treausure  of Split. I suspected it was some coin, and that was a subject of my public lecture...   Also, I got terrible cold after that visit, which fits with my South Node at 29 º  Aquarius /0 º  Pisces...

When IAM  was born, on May 19 2015, my first article was about Ashmole 782 and 15 º  Cancer and the first issue #IAM01 we called #782. During May 2017 IAM will celebrate its 2nd Solar Return (May 19 2017) and this is #IAM13 #TheGateKeeperIssue. This is the last time when We will celebrate solar return on May 19. From now, IAM will celebrate its birtday every year on February 8th, because, one gate we closed, and we open new one, with The Gate Keeper who protects Us.
The New IAM was born on February 8th, 2017, only two days before the lunar eclipse at 22 Leo.