HOW FAR "RIGHT" WILL FRANCE GO?
PRESIDENTAL ELECTION IN FRANCE 2017 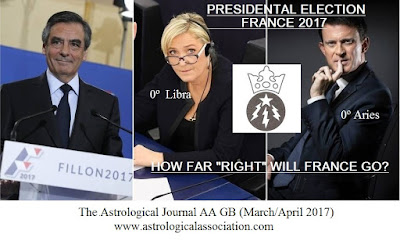 For the spring issue of “The Astrological Journal“ 2016 I wrote the text about France (and Paris as its capital) “being sensitive” to 21º Aquarius and I ended that text with the remark that on February 11, 2017 there will be a lunar eclipse at 22º Leo and France will be “called out”, in the year of presidential elections. The first round of presidential elections will be held on April 23, and the second on May 7.


The year 2016 will be remembered by Donald Trump “unexpectedly” winning presidential elections in the United States, which turned out to be a tailwind for French National Front – ultra right, nationalist political party led by Marine Le Pen.

Marine Le Pen and Manuel Valls move the axis 0º Libra/0º Aries — axis 4/10 from the chart of the Fifth French Republic! Who will win? What about François Fillon? My full article You will be able to read in spring issue March/April 2017 of The Astrological Jouranl AA GB


Here you can read my article Paris and 21° Aquarius