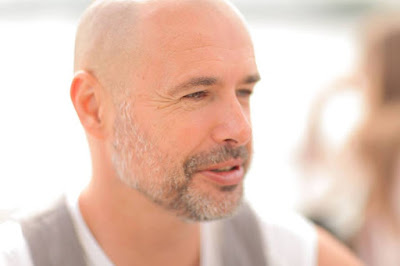 Everybody carries inside not only the story of his own life, but also of many other lives that are unconsciously interlaced. Draconic horoscope is the type of horoscope that gives the secret picture of the Soul, describing the connections with people (and regions) we know from previous lives, and implying that our feelings are not absolutely ours… In other words, it speaks of our Soul's memories.

We all have somebody (or something) that we love, with whom we are "connected", who we feel and in whom we recognize something ours…

When on October 16, 2013, Siniša Račić started his project "Active Holiday“ – he was only inadvertently following his dreams. In his chart, Siniša has very prominent Uranus (being original, brave; freedom) at the Ascendant as the ruler of his 5th house (creation). People with Uranus at Ascendant are usually pioneers in their profession, they are twenty steps in front of their time, they are "crazy", brave, very fast, open to everything that is new, different. On the other side, this is not the easy way, but all that is more challenging in life brings greater happiness later. The very position of angular houses (Asc, Desc, IC, MC) across 0º of cardinal signs speaks of the fact that Siniša revives so-called "Avatar degrees" (15° of fixed signs) through his horoscope, so his purpose is to start something during his life that will have effect on masses. Avatar degrees in astrology indicate that the fate of these people is not an easy one, and that Siniša is a kind of agent in connecting  – only seemingly disparate opposites. It takes "crazy bravery" for Avatar degrees because they speak of a strong, unconscious need for transformation, for "breaking" the old forms we inherited in the river bed called  – genetics. From the point of view of my years-long research, these degrees also relate to  practicing Kundalni Yoga, which is also the part of his life, a part he is in love with. „Avatar degrees“ are in semi-square (aspect of 45º) with 0º of every cardinal sign (Aries. Cancer, Libra, Capricorn), that tell of the beginning of the four seasons. When the Sun comes to 0º Aries – the spring begins, when it reaches 0º Cancer – the summer begins, at 0º Libra – the autumn begins, and when the Sun reaches 0º Capricorn – the winter begins. 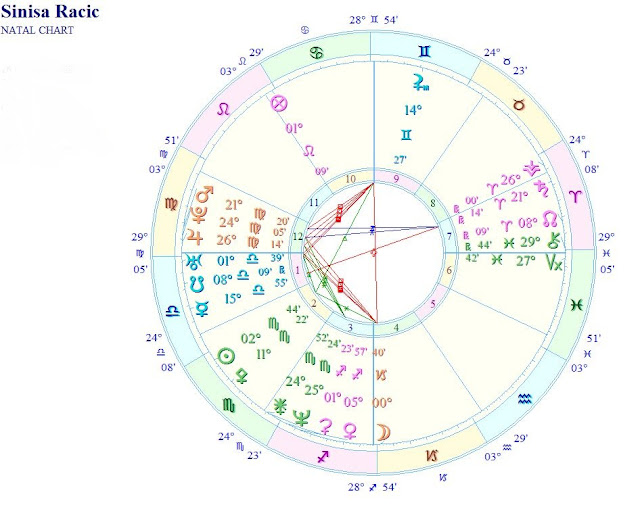 Ceres – the goddess of Nature

Venus (essential signifier of nature, but also the ruler of Siniša's South Node – the life before the last) is in the 3rd house (our words, all we say, write, our Mind), in Sagittarius (expansion, broadening of knowledge), and in conjunction with asteroid Ceres. Ceres is Goddess, Mother of the nature, patron of grains and grain fields, and that archetype is what Siniša carries in his Soul as a memory that he inadvertently follows during this incarnation. All those who ever have had a chance to see what Siniša does could immediately see his endless love of nature and his promoting it through activities within the project „Active Holiday“.

Siniša's horoscope carries great spiritual potential – Sun (daily light, knowledge of Self) is at 2º Scorpio, close to the Pluto's exaltation degree (transformation), but also close to the degree of Moon's fall (emotions), so one of his tasks is to make himself "emotionally lighter" during this life, clear of "bad" emotions. Emotions are just memories, and memories are not ours, those are our ancestors within us, and it is a river with many things within, and there things should be "cleaned"… The position of progressive Ascendant (it moves 1º during 1 year)in the moment when project "Active Holiday" was initiated is interesting – it is the mentioned 2º Scorpio! This was the clear sign of the Universe! This is the spot in the Zodiac where everything old – ceases! His natal Sun (Light) is revived, and the creation was born in 2013! 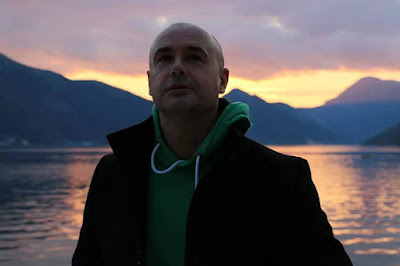 Mercury (Mind) is at the beginning of the Burning Way (Via Combusta), that covers the space between 15º Libra and 15º Scorpio. Here, it is the story of the magic powers of Egyptian goddess Isis, who knew the secrets of the underworld and revived the dead (remember the myth of reviving her dead husband). In real life, this might mean the great need for mastering spiritual techniques in order to heal oneself first, and then everybody around. Mercury has a challenging aspect with Saturn at the star from the constellation of Cetus (Whale – the monster), that also carries spiritual potential.

Here there is the change after the long time spent in the "cellar of one own's internal universe". While being in the "belly of the whale", one has a chance to realize his mistakes and after that comprehension of deeply unconscious contents one can honestly ask the Creator within (the personal God) to open the door, and point to the Light. After that, it is up to everybody to go to the world and share the knowledge… Siniša is doing just this, through events and people he work with at "Active Holiday“.

I must add that the Sun (the knowledge of Self) is also on the Burning Way, so it is obvious that Plutonic part of Zodiac is accented here. It takes courage to go to the underworld, because only a few managed to return from there. It takes wisdom to go "down" there, to master the powerful knowledge and to return "up" here, to the Earth, to share that knowledge… This is always the double-edged sword, because the world of energies carries the trap within.

Promotion of the healthy life is evident from Siniša's stellium (three planets) in Virgo (Mars, Pluto and Jupiter). This stellium in Virgo in 12th house (silence) is supported by Neptune (spirituality) in good aspect, so accenting meditation and all other techniques that contain it – is definitely something that strongly marks the project "Active Holiday“.

The Moon (night light, subconscious) is at 0º Capricorn, very challenging spot in Zodiac, because it is automatically included into "Avatar degrees“. The Moon describes all people we meet in life, and these are the people Siniša comes in contact with through his projects. 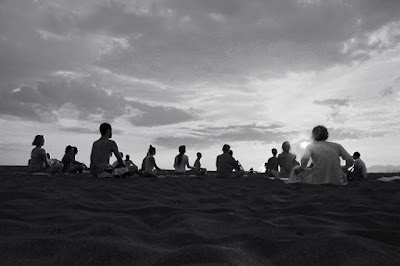 Let me now go back to the notion of draconic horoscope that I have mentioned before. We are being born and come to the planet Earth just to revive the memories of our souls and to finish the unfinished business from previous incarnations. When "Active Holiday" was founded, Ascendant - the body of this project - was at the very mystical fixed star ATRIA (21º Sagittarius), from the constellation of Triangulum Australis (the Southern Triangle).

Specificity of this star is that it represents a kind of secret, invisible connecting and associating, mainly on positive basis. It has being related to architecture and masons. It implies secret societies, coded messages, illuminations, Holy Grail. In Draconic horoscope, there is Siniša's  Moon at 21º Sagittarius, clearly indicating that "Active Holiday“ is something he carries as a memory of his Soul from the previous life, and in this incarnation he just inadvertently followed his memories, his river (genetics)… The following year will be an interesting period, when Siniša's progressive Sun and progressive Ceres (nature) come at 21º Sagittarius and when the whole story of the Southern Triangle come to life. Possible are projects involving visits to places that contain secrets, coded messages, great knowledge…, for in the end "Active Holiday" was founded because of the Southern Triangle and now is the time for the story to start! 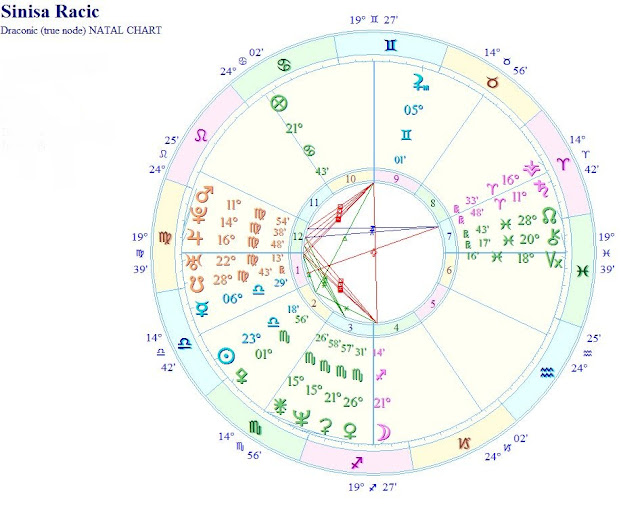 The next interesting thing is the position of the draconic Sun. It is at 23º Libra! On the day Siniša started with "Active Holiday", the transit Sun was at 23º Libra! Isn't this more than clear message that the Universe always takes care of everything?! Siniša did not consult the astrologer then, he just followed his heart… There is a very generous fixed star SPICA from the constellation of Virgo at this spot, and its nature is Mars and Venus. This star speaks of the gifts that fall from the Skies, if Mars and Venus are in harmony. In the chart of "Active Holiday", rulers of Mars and Venus, Mercury from Scorpio and Jupiter from Cancer create the Grand Water Trine with the Moon in Pisces, so it is certain that the Universe has prepared the award. Every grand trine is a potential talent. I also wish to add that this star was assigned its Mars-Venus nature by Ptolemy, which speaks volumes, since this is the natural axis of Zodiac (Aries-Libra).

Draconic horoscope is one very intimate horoscope of every one of us. It is essentially the lunar horoscope, the horoscope of our etheric being… A person carries within the picture of memories of all earthly events, so the primary representation is a geocentric natal chart. Still, he has an aura around him. As the Moon revolves around the Earth, the man has an etheric body enveloping him, so every one of us has a horoscope of that etheric body, and it is draconic horoscope. Draconic Zodiac represents our memory of everything from before this life… the Moon is the field of death, the end of life and all souls are there, for all souls go and reside in etheric space. And if we talk about a relationship, one should consider that he is one being, while the Earth is one and the Moon is the other – we are physical-etheric beings. That is exactly the secret of life – the Earth looks for the Moon, and the Moon looks for the Earth in order to revive their unity!

Whenever there is the combination of natal (Earth) and Draconic (Moon) hiriscopes of two persons, two bodies, two entities – they certainly know each other from previous lives… It is possible that the energy is not dense enough for materialization, but the recognition is there – either negative or positive… Every harmonic aspect between draconic and geocentric (natal) horoscope presents the channel from which the person easily receives messages… Especially important are conjunctions of natal planet of one person with draconic planet of another person, for it is depiction of direct merging of two parts of Existence!

It is important to assess in each relationship what is the main thread (main aspect), i.e. the main channel through which the relationship is manifested, and that is usually represented by 1-2 aspects, which give or take away the energy in the relationship. 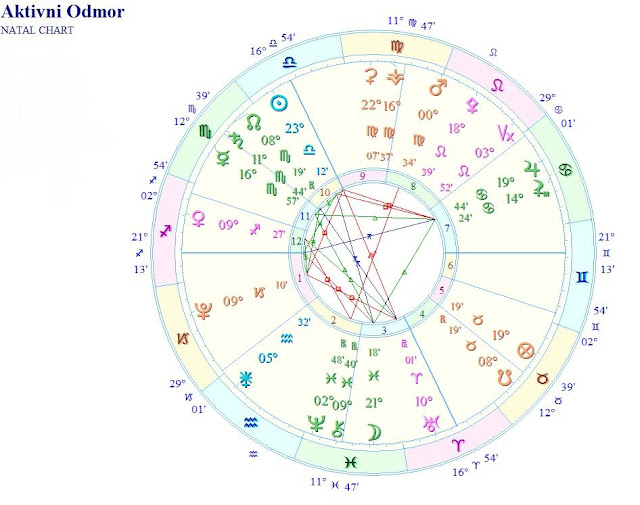 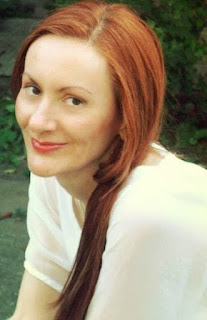 Smiljana Gavrančić obtained her astrological education at the Institute for Astrological Research and Education "Johannes Kepler" in Belgrade, where she graduated in October 2010, defending her thesis in Mundane Astrology “European Union – In Varietate Concordia” (united in diversity) and obtained the status of a graduated Astrologer Researcher. In February 2011, she met requirements to work as an Astrologer Consultant and in March of the same year, she became an International Certified Professional Astrologer (ISAR C.A.P.).
Smiljana is a member of ISAR (International Society for Astrological Research) and  of the  Astrological Association of Great Britain.

Smiljana is a founder and owner of Infinity Astrological Magazine
During the academic 2010/11 within the post-graduate level, she studied Hermetic Astrology.

Smiljana finds great inspiration in research work, which she presents in her astrological texts. A special emphasis isput on finding significant degrees in the Zodiac for a specific country in the area of Mundane Astrology or a significant degree for relations between two persons in the Astrology of Relations. In her search for responses to the question as to why something (or someone) is happening to us, Smiljana also practices Karmic Astrology, as well as the Astrology of Archetype (fixed stars, mythology).

Smiljana studied International law and Law of International Organizations at the Faculty of Law of the University of Belgrade. She interrupted her studies at the last year (in 2006) and since then, she exclusively dedicated her life to self-study of astrology.

Smiljana’s articles were published in the famous astrological journals: ISAR Journal (USA), The Astrological Journal (UK), The Mountain Astrologer blog (USA). She is a speaker at the astrological conferences in Serbia and abroad.