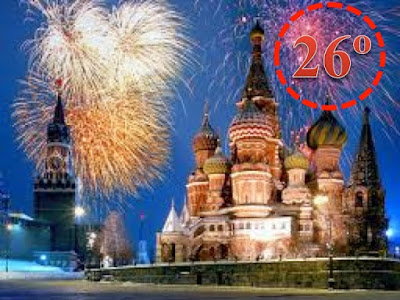 The next year, 2012, is by far important for the biggest country in the world, Russia. In March 2012 there will be presidential elections – certainly won by Putin –  and during June there will be a square between Pluto and Uranus that will activate Mars/Uranus square from the horoscope of New Russia (and these are 8th degrees of cardinal signs!).

It is certain that the new Russian President will face great challenges during his mandate (from 2012 to 2018), for we know what Uranus/Pluto square brings on – radical reconstruction of nations and people, rebuilding on the old remains, radicalism and conservatism, drastic changes, revolutions and falls that may become like chaos, release of the power and creation of new forms, sometimes new (Uranus) authoritative forms (Pluto) although completely opposite of the previously taken down ones. 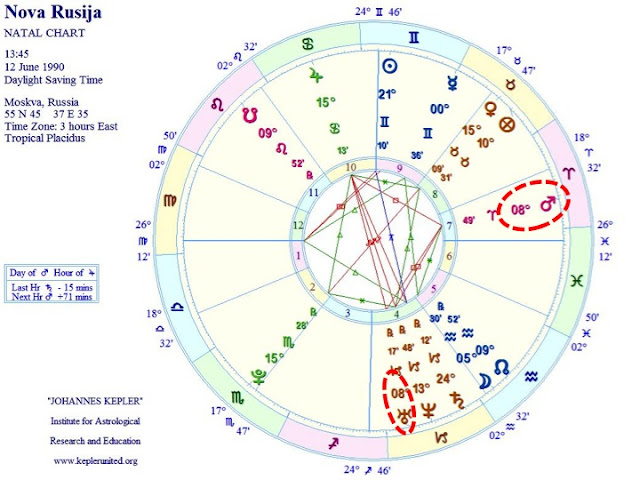 Last time these two planets were in a square was in 1933, and it is interesting that the Third Reich was established during the square of these two planets! The whole Uranus/Pluto cycle lasts for 127 years, and during it there is the conjunction of the planets first, marking the beginning of the cycle, then follow sextile, square, trine, opposition, trine again, square…– to the conjunction again.

For understanding of mundane events, it is necessary to understand 3 levels of manifestation: 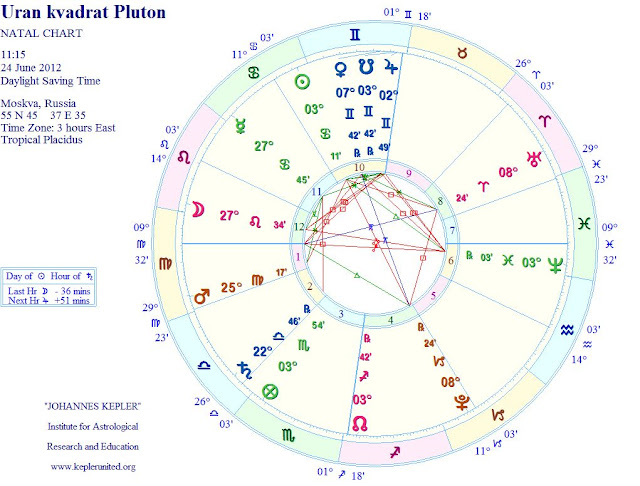 Exact Uranus/Pluto square is very important for New Russia, for it goes over the existing square of Mars and Uranus in its horoscope. Its Uranus is intercepted in the 4th house, in Capricorn and it is retrograde (deep inside the country, perhaps somewhere in the hills, mountains), which certainly represents the territory of the given country. That Uranus is in square with Mars (ruler of 8th house) which is in the 7th house – implying the possibility of conflicts, wars and generally tense relations with other states. 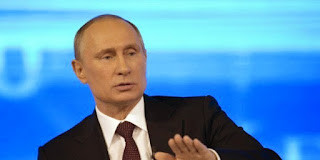 Vladimir Putin, present Russian Prime Minister, certainly the important figure in Russia, and most certainly the new Russian President after the presidential elections in March 2012 (beside other things, all of his planets come to sextile with their natal positions in directions!) has the ruler of the Ascendant, Mars, at 26º Sagittarius, and during the next year, 2012, directive Mars will come to 26º Aquarius, making the square with the axis 1/7 from the chart of Bolshevik Russia. 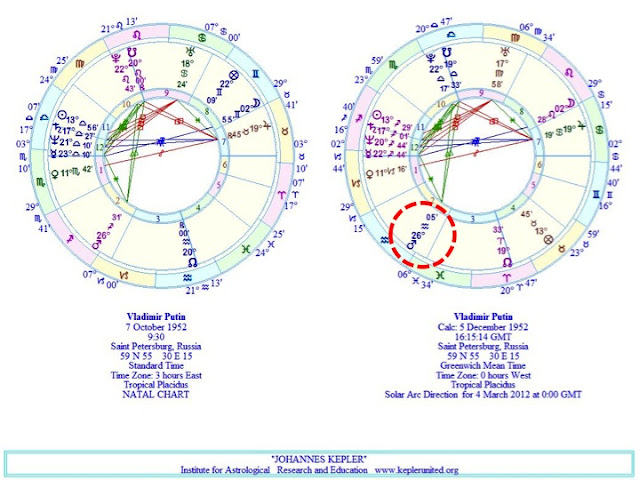 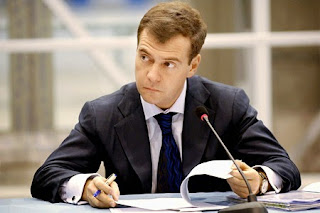 Namely, his natal Mercury at 9º Virgo and in conjunction with the star Alioth from the constellation of Ursa Major (hence the last name "Medvedev", meaning 'the bear' in Russian language), comes at 26º Scorpio in 2012 – exactly at the Ascendant of the Bolshevik Russia.

When we do directions (Solar Arc) for the horoscope of New Russia for 2012, we see directive Moon at 26º Aquarius, right at Putin's directive Mars (strongly binding him and people who will vote for him), and in square with the axis 1/7 from the chart of Bolshevik Russia, and also in quincunx with the Ascendant of New Russia. 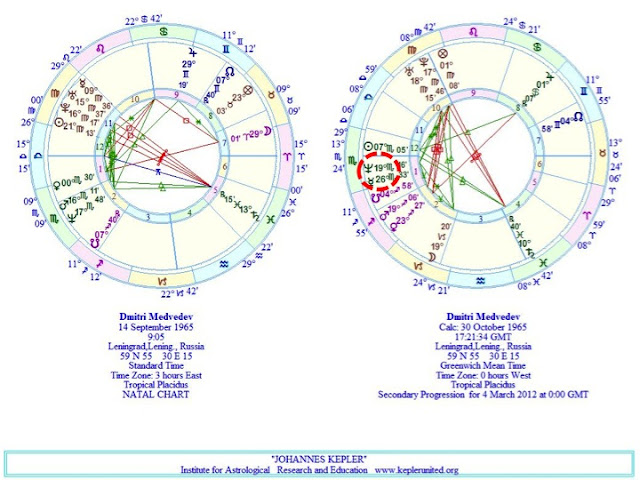 Finally, in the horoscope of Bolshevik Russia (whose Ascendant is at 26º Scorpio), directive Moon comes at the very same 26º Scorpio in 2012!!! 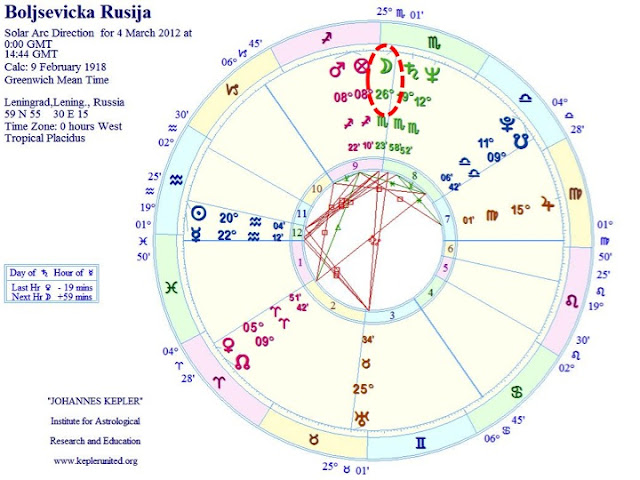 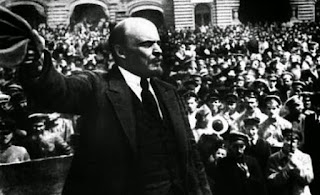 Let us look even further – through another historically important person of the Russia  – Lenin. His Ascendant is also at 26º Scorpio, and the majority of Sagittarius is in the first house. So, Ascendant (26º Scorpio), but also partly Jupiter (residing at 26º Taurus) in Lenin's horoscope represent the people of Russia, but also the conflicts, wars and international relations. When we progress Lenin's horoscope for March 4, 2012 (the date of presidential elections in Russia) – we see his Venus at 26º Leo! As may be concluded, 26th degree is activated, and in fixed signs of Leo, Aquarius, Taurus and Scorpio, forming the grand cross. 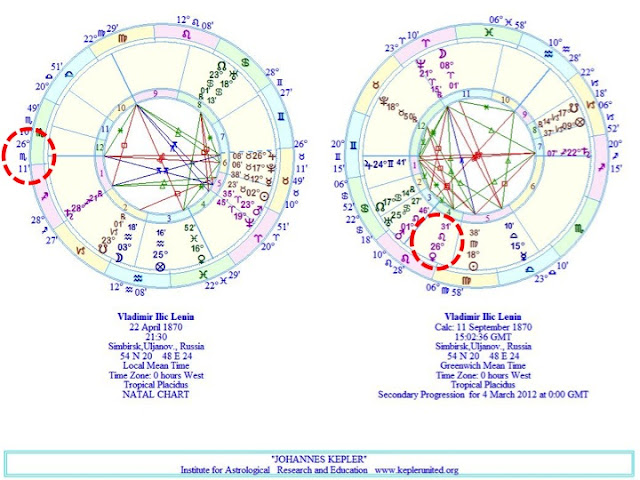 Activation of 26th degrees of fixed signs, as well as of 8th degrees of cardinal signs by Uranus/Pluto square in June 2012, initiates some serious events in Russia, and most certainly the new president -- Vladimir Putin will have to face it.