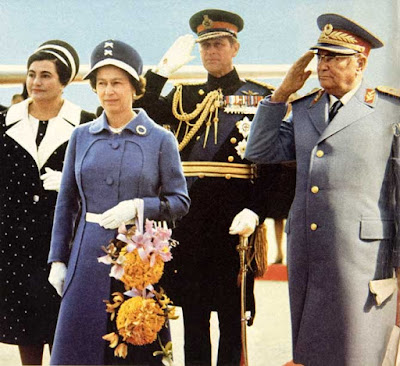 British Embassy in Belgrade celebrated three jubilees during 2012, during the time of retrograde (the past) Venus (diplomacy)…

The first jubilee is related to the official birthday of the Queen Elisabeth II and her Diamond Jubilee, 60 years since she became the queen of the Great Britain and Commonwealth. The jubilee was marked by the Thames pageant sail and pompous celebrations that lasted from June 2 until June 5, both in United Kingdom and all 16 states of Commonwealth. The Diamond jubilee was not celebrated since XIX century, when Queen Victoria celebrated 60 years on the throne. 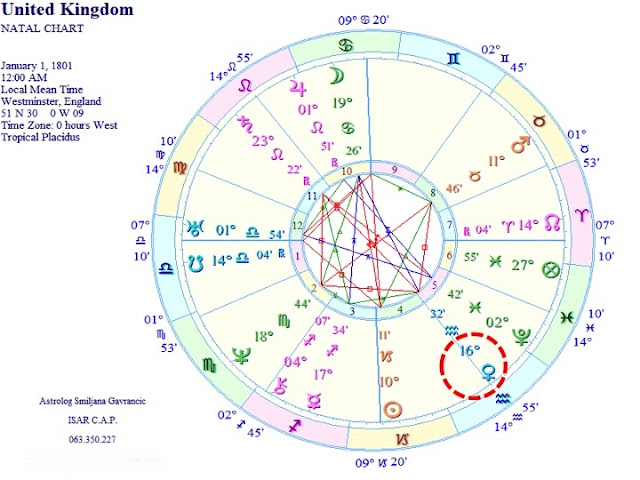 Having inherited the throne from her father, George VI, on February 6, 1952, at the time when Winston Churchill was British Prime Minister, Queen Elisabeth II "changed" 12 (symbolism of being retrograde) British prime ministers, the same number of American Presidents, 6 (Venus) popes changed in Vatican, while the Queen had visited 116 states. Queen Elisabeth also opened XXX Summer Olympic Games in London. The Olympic stadium will be named after the Queen from the following year, 2013, and the famous Big Ben (Clock Tower), the East tower of the Westminster Palace will be renamed the Elisabeth Tower, to honor the Diamond Jubilee. The West Tower was named after the Queen Victoria in 1860, to honor her rein. 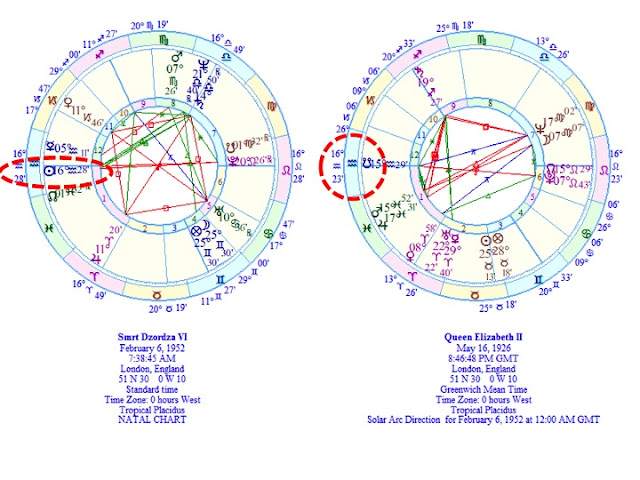 In the Sun chart for February 6, 1952, the day her father, King George VI, died, which is automatically the day of her accession - the Sun (her father) was at 16° Aquarius 28', at Venus, which is the ruler of the first, but also the eight house (death), which is much more important in this case, because it was the day the King (transit Sun) had died (Venus, the ruler of 8th).

But, Venus is also the ruler of the ascendant (fate of the nation, situation, general circumstances, capital, i.e. London) in the United Kingdom's chart. It is interesting that the directive ascendant (moving about 1° for one year) of Queen Elisabeth II on the day of her father's death was at 16° Aquarius 23' - at the same spot as the transit Sun was on that same day! If we add the fact that Queen Victoria, who was the only ruler that lived to have the Diamond Jubilee (60 years of reign) and who was the great-grandmother of Queen Elisabeth II, was famous for her reign that was said that "the sun never sets in United Kingdom" and United Kingdom became the leading world force for the Queen brought the economic and technological advancement, social changes and the peak of industrial revolution - had Jupiter in her chart in 10th (she as a ruler) at exactly 16° Aquarius 55', than 15° Aquarius might be something important, something that we astrologers must pay attention to in the chart of United Kingdom!

If we look back now at this 2012, the year of retrograde Venus (something from the past), the year in which Queen Elisabeth II achieved something her grand-grandmother had achieved years ago -- to become the second monarch in the British history who reigns for 60 years -- then we see that in this year directive Moon (the Queen Mother, because the Cancer is at the cusp of the 10th in United Kingdom's chart, and the Moon is in the 10th in the sign of its seat, Cancer) in the chart of United Kingdom is at 16° Aquarius 34'! Further on, Queen Elisabeth II has directive Saturn (in natal chart it is at 24° Scorpio 27', at the cusp of 10 -- she as the ruler, and it rules her ascendant in Capricorn and in her case it also represents the British people, since the ascendant is the fourth house (people) from the 10th) -- at 16° Aquarius 49'. 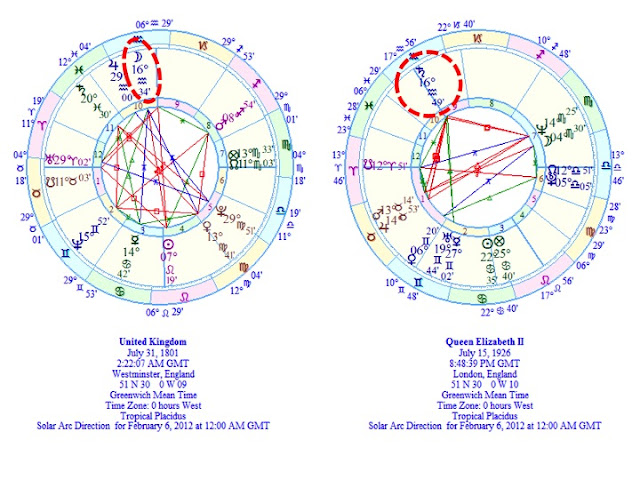 As we know, in June Venus had crosses the Sun's disc at 15° Gemini (almost 16°), which surely "moved" the mentioned 16° Aquarius by the trine, so 2012 is the year of the special importance for United Kingdom! The Venus (London) was "touched" at 16° Aquarius 32' from the United Kingdom's chart, which is placed in the 5th (celebrations), so everything is in the sign of celebration and remembering someone from the past. The time of the Queen Victoria was certainly somehow "revived" through Elisabeth II, and all that in the year of the retrograde (someone from the past) Venus.

The history of British-Serbian relations started on April 1832, when the diplomat and publicist, then secretary of the British Embassy in Constantinople, David Urquhart, stayed shortly in Serbia on his way from Constantinople to London, and met with Prince Milos Obrenovic. The meeting happened again the following year, 1833, in November, on the new trip to Constantinople. The most important subject of the second meeting (symbolism of being retrograde - repetition) was the possibility of establishing diplomatic relations between two countries.

At the end of 1833 Urquhart submitted the detailed and confidential report about his talks with Milos Obrenovic to his government. What is interesting for us is the fact that at the end of 1833 directive ascendant of Serbia (the people of Serbia) came at 7° Libra 05', almost at the ascendant of United Kingdom, so this is depiction of Serbia's "getting closer" to London. Also interesting is the degree Serbian secondary ascendant was at that time. It was 16° Libra 32! On the other hand, the cusp of the secondary 7th (foreign relations) in Serbia's chart came at 16° Aries 32'! In the chart of United Kingdom, the ruler of ascendant - Venus is at 16° Aquarius 32', so this is also depiction of establishing relations between London and Serbia. 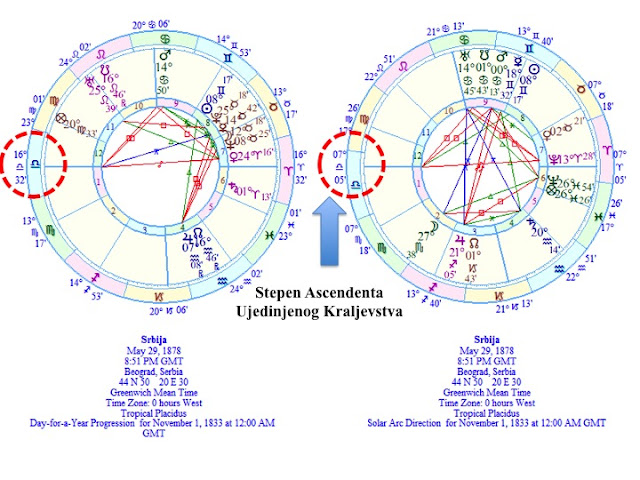 Why is all this interesting for us astrologers? Because the decree on appointing the first British consul to Serbia, colonel George Lloyd Hodges, was signed on January 30, 1837 -- secondary Sun (reputation, honor) of United Kingdom was exactly at 16° Aquarius 53', at the degree important for the Britain itself, but also for the British-Serbian relations as we shall see. 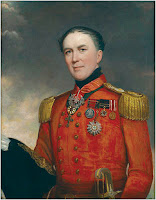 The first British Consul, colonel Hodges, arrived in Kragujevac, then capital of Serbia, on June 3, 1837, when he officially delivered letters of credence to Prince Milos Obrenovic, which officially had established diplomatic relations between London and Serbia. Serbian Prince accepted the first British Consul with all the honors, and very cordial relations that had been established at the first meeting grew into very close ones in time… Interestingly, on that very day, Venus (diplomacy) was at 16° Gemini! In this year, 2012, the mentioned crossing of Venus across the Sun's disc happened at 15° Gemini (almost 16°), which reminded us of the importance of diplomatic relations between United Kingdom and Serbia in this year specifically, the year of the retrograde Venus. For, one one side there is the Grand Air Trine across 16° Aquarius, Libra, Gemini, and on the other side there is strong Lotus constellation created by 16° Aries with 16° Aquarius on one side and 16° Gemini on the other side. 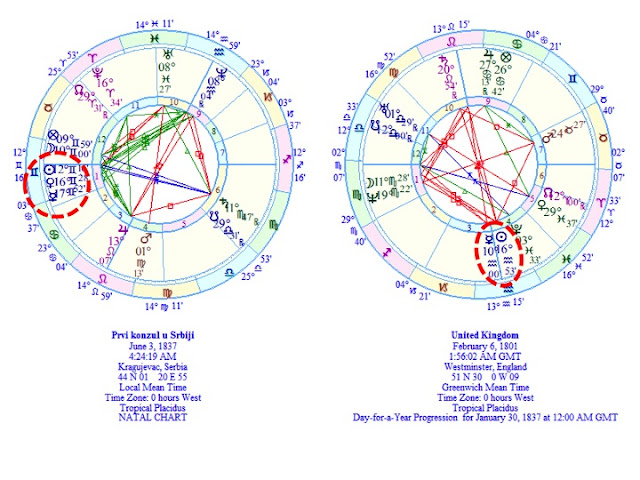 All this leads to conclusion that there are special, bilateral relations between these two countries, that have special importance in this 2012 year, because in the chart of Serbia the Venus (diplomacy) is at the spot where on June 6 it crossed the Sun's disc, at 15° Gemini (close to 16°).

And in the end, the perfection of the Universe and its ability to take care of everything is confirmed by the very day of the official visit of Queen Elisabeth II to Belgrade. It happened on October 17, 1972, and in this 2012 United Kingdom and Serbia mark 40 years since that visit. So, another jubilee. The visit happened sometime around noon, and exactly then the transit Moon was at 16° Aquarius 35'! 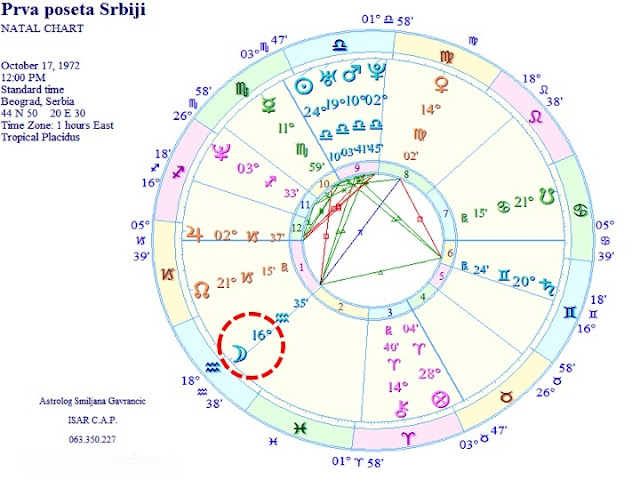 As all started in the long gone 1837, when colonel Hodges arrived in Serbia as the first British Consul, his mandate was remembered by making modern ideas of western democracy and liberalism closer to the small Balkan dukedom, which is reflected in the mentioned Grand Air Trine (that gives intellectual abilities, excellent orators and diplomats), and Lotus constellation across 16°…

It is interesting that the Prince Milos Obrenovic (who was "called out" by the Serbian opposition to be absolutist ruler and whose "socialization" with Hodges bothered them) was willing even then to accept the western values (at 16° Aquarius there is a star from the Delphinus constellation that is related to the far West, to salvation from all the troubles through niceness and kind nature) and that he saw the opportunity in the British Consul to liberate Serbia from the Russian influence… Britain also had its interests, of course… They wanted free pass to India, free pass through Bosphorus, diminished Russian influence on the way of their conquest of Asia, and Serbia was definitely the important stop on that road… Later, the Queen Victoria, who interestingly came to throne only two weeks after the establishing of diplomatic relations between Serbia and Britain (June 3, 1837) -- became the Queen of India!

16° is analogous to the fourth sign, the sign of Cancer, and may remind us of the presence of emotions, closeness (Cancer) in British-Serbian relations, and all that in communication (air signs - mental, intellectual). In line with this is the claim offered by historians that no other consul managed to have so close relations with any Serbian ruler in XIX century as colonel Hodges had with Milos Obrenovic. They used to see each other daily, to have confidential talks, and were good friends…