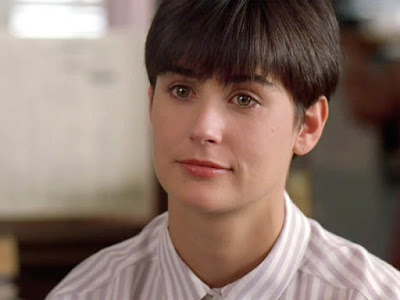 Philos corresponds to brotherly love. It is the affection towards friends that usually lasts long. Eros is the burning love of sexual passion. Philos contains a little from Eros, but Philos is the feeling that you desire the best for the other soul.

The third aspect of love is Agape – spiritual love of God and his heavenly kingdom. It is the purest of all loves and is devoid of ego. Submission, sacrifice and loyalty are recognition signs of Agape. One of the greatest ironies of life is that the realization of Agape is preceded by loss, sorrow, physical pain or the death. In esoteric tradition this type of love is described as “washed in the blood from the heart”.

Contemplating this Holy Trinity we must think of the possibility of the fourth condition, necessary for those three loves. It is human body, known as the Temple of Living God in esotery, described as the rare gift by spiritual teachers in all religions. It is given to the soul only after death in the lower levels of creation. Creator made it alive by connecting it with the God by the silver cord that cannot be broken.

Godly astrological science also explains the threefold manifestation. There are cardinal signs (Aries, Cancer, Libra and Capricorn) and angular houses of physical action (1, 4, 7 and 10), fixed signs (Taurus, Leo, Scorpio and Aquarius) and succedent houses of feelings (2, 5, 8 and 11), and mutable signs (Gemini, Virgo, Sagittarius and Pisces) and cadent houses of mental spheres (3, 6, 9 and 12). Which of the three astrological crosses illustrates the trinity of love of Eros, Philos and Agape? Trinity of love may be found in the fixed cross!

Where may be love found in the horoscope? A lot is written about the 7th house – the house of marriage and its connection to the sign of Libra – the sign of the marriage and Descendant. This is still only the outer frame of relations, because Saturn, which is exalted in Libra and in the 7th house, rules the form and structure.

If the love is hidden in horoscope, where it might be found? 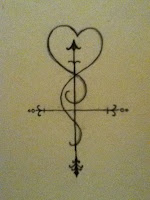 Our physical body – the Temple of Living God – is at the bases of the cross that contains three forms of love, and is symbolized by the Taurus and the second house. Eros – the sexual love – is in the fifth house, the house of the sexual intercourse, that is connected to Leo, the sign of love and children. The love that is not sexual – Philos – is located opposite of Eros, in the eleventh house of friendship, and is connected to the Aquarius, the sign of brotherly love. And in the end, opposite of the body temple is Agape, spiritual temple in the eighth house of losses, which is analogue to Scorpio. Eighth house is often described as the house of death of ego, dark side of the soul and mystical experiences. From this diagram that connects the fixed cross situated in succedent houses, it is clear that human consciousness experienced love in its all three forms. 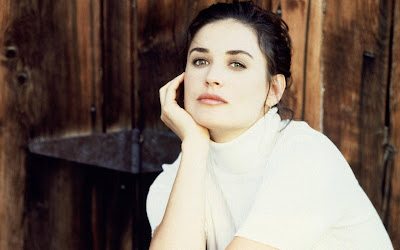 In order to understand how the client experiences love, take a look at the signs at the cusps of succedent houses. Cardinal signs often describe an active life in relationship, where the soul constantly initiates the connection with others. Even after painful heartbreaks and losses, these souls will always make new relationships in their lives. Fixed signs at cusps of 2nd, 5th, 8th and 11th house usually describe happy souls that steadily stay married for more than 30 years to the same person. With fixed signs at this place, the opposite is possible sometimes – people staying in celibacy for years, choosing not to be in sexual relationship. Mutable signs at cusps of succedent houses often describe people who are mentally preoccupied with the concept of partnership, but are not always ready to enter the dedicated sexual relationship as marriage. It is even very often the case that they have more than one lover simultaneously, which really takes the trick of one’s mind if planning to keep each of those relationships. For example, the ruler of the 5th house of Eros in trine with the ruler of the 11th house of Philos implies that former lovers remained friends. Square, opposition (as well as “difficult” conjunction of two malefic) of these two rulers indicates unpleasant ending of the love relationship. Of course, it is always good to take a look at disposition, as the final state of the things. 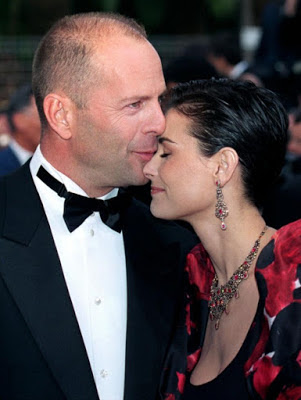 Let us look now at the horoscope of the famous American actress Demi Moore, since it is excellent for this topic. The first thing we see is fixed T-square across succedent houses. The Moon (essential signifier of emotions) is in Taurus (as the ruler of 5 – Eros) in the 2nd house (physical body). Mars, essential signifier of passion (the ruler of 8 – Agape) is in Leo in the 5th house (house of Eros). And there is stellium in Scorpio (8th sign) in the 8th house (Agape) – Mercury, Neptune, Sun and retrograde Venus. Here, the conjunction of the Sun and retrograde Venus is especially interesting – it is so-called the “lower conjunction”, which certainly brings this woman strong karmic relationships that deeply change her. When your birth happened in the time of retrograde Venus, who almost touched the Sun (in Demi Moore’s case), it is more than certain that you will have very important love stories in your life. Her second husband, the famous actor Bruce Willis, “puts” Saturn at her retrograde Venus and Sun, which tells that their story is very karmic and that the person owning Venus (Demi) has some karmic debt towards the person owning Saturn (Bruce), and it also tells that this relationship is limited in time. Also interesting is the following – Bruce has his Venus at 17° Aquarius, exactly across her Mars (as the tip of her T-square) and practically he “puts” Demi into fixed grand cross! We can now say that this is the “shadow” – Bruce here activates her shadow and there are two questions here: to stay in such a relationship and take all the good of higher consciousness, or to leave it, for it continuously activates the shadow. Bruce Willis is actually helping Demi Moore to reach her hidden depths that were unknown to her before, but also to revive Philos (friend love). The same happens when the partner put us into T-square or Yod through synastry, so the shadow is not only activated by the grand cross. When those three configurations (T-square, Yod, Grand Cross) are seen in synastry or composite horoscope, and if they contain lights (Sun, Moon), Venus or Mars – the partner activates the shadow. This makes the relationships unstable, but at the same time these very relationships open the door to consciousness. 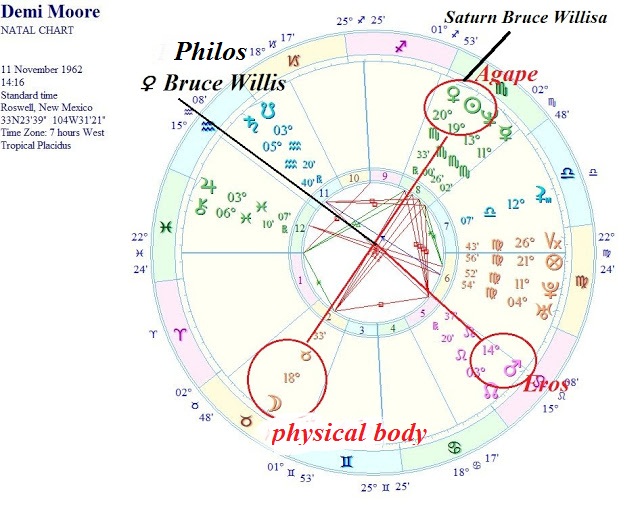 Of course, if we analyze the relationship of these two people further, the conjunction of his Moon in Aquarius with her South Node and Saturn is striking, speaking of strong karmic relationship. Also in synastry, these two people have conjunction of her Moon in Taurus and his Mars, so the strong passions at the beginning might have turned into conflicts and arguing. It is very possible that her heart (Moon) was too sensitive to some of his actions (Mars in Taurus, in exile). His Venus is opposing her Mars – an aspect of strong physical attraction. I must emphasize that we usually get into relationships with people with whom we have strong conjunctions and oppositions. Squares, trines and sextiles are not of much importance. Bruce Willis has fixed grand cross in his horoscope, and Demi only additionally activates it. Venus from Aquarius is in his 5th house (house of Eros), Saturn in 2nd house (house of physical body), Mars in Taurus in 8th house (house of Agape), while his Pluto is in 11th house (house of Philos, brotherly love). Demi Moore needs Willis’ Aquarius, i.e. his Venus, because with his Venus she is given the opportunity to dive deep into her hidden parts and to reach consciousness, although this relationship is never easy. There are many losses here, on both sides, but those two people remain in good, friendly relation after all. 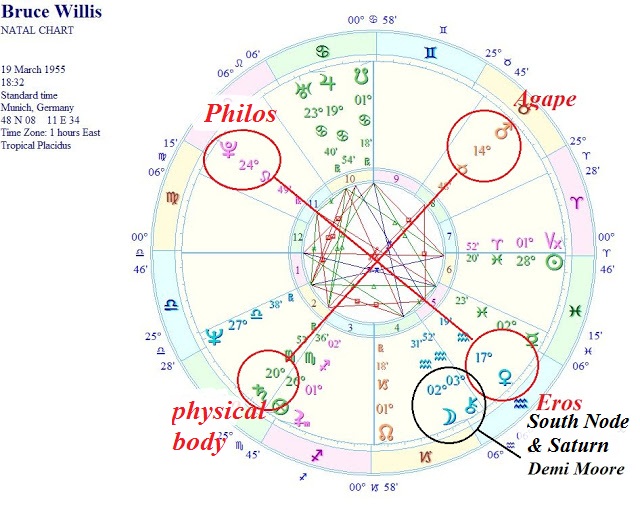 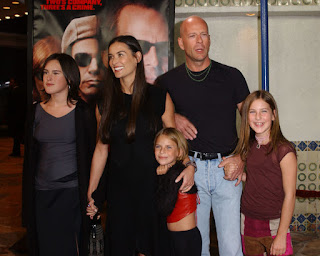 If we finally take a look at Antiscia chart of Demi Moore (more famous as the shadow horoscope), we see stellium in Aquarius, which only confirms how much she needs of this sign to be complete and live as a conscious being. In Davison Relationship Chart these two people also have fixed grand cross, and I want to emphasize Chiron (healing) at 20° Aquarius, very close to the Venus of Bruce Willis which activates “the shadow” of Demi Moore. From the point of view of karmic astrology, very interesting is also the Venus at 9° Aquarius, the same spot where retrograde Venus in her Antiscia is. There is no doubt that this relationship is very important to her, and she has some past-life memory regarding it. Also, in Antiscia Bruce has Saturn (natal ruler of 5 – love, Eros) also at 9° Aquarius! 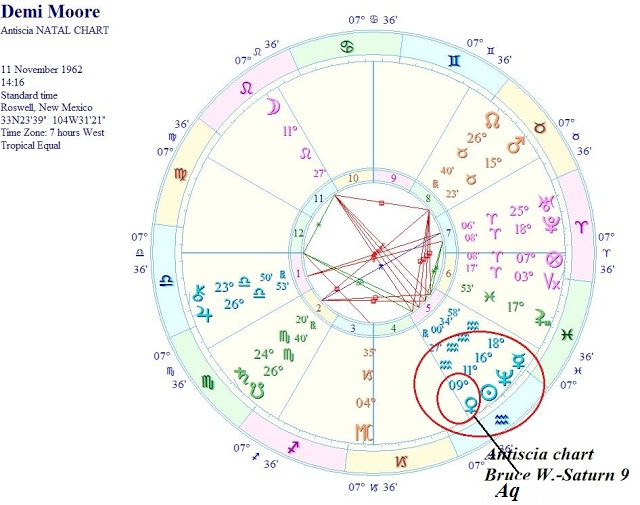 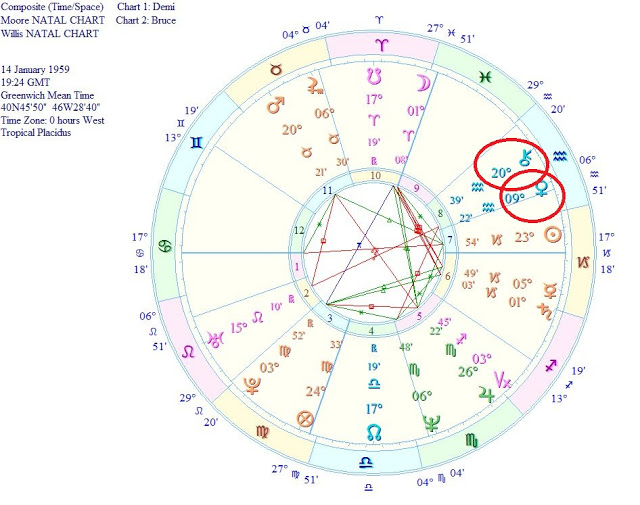 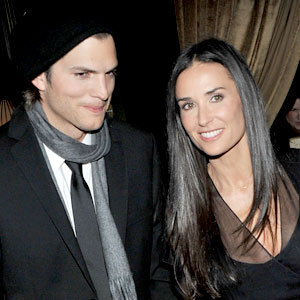 After divorcing Bruce Willis, the next husband of Demi Moore was Ashton Kutcher, the famous American actor. It is interesting that he also helped her to reach into hidden parts of herself and to activate the shadow. He has stellium in Aquarius, 4 personal planets – Sun, Moon, Venus, Mercury. Mercury rules his ascendant in Gemini, and is touched by her South Node, which indicates the strong karmic background of this relationship, where she “swallows” him somehow, or mildly speaking, she “painfully transforms” him. But, his Sun, Moon and Venus activate her fixed T-square and help her significantly on her way to gaining the higher consciousness, just like Bruce Willis helped her. It is probably clear now why Bruce Willis is in friendly relation with Ashton Kutcher – Bruce’s Venus is in conjunction with Ashton’s stellium in Aquarius, and his Moon is exactly on Ashton’s Mercury. As Demi “painfully transforms” Ashton’s Mind (Mercury) with her South Node, she did the same to Willis’ heart (Willis’ Moon in conjunction with her South Node). Ashton himself has fixed T-square, with Uranus at the top, and with the help of Demi’s Moon from Taurus and also Bruce’s Mars from Taurus he is given the opportunity to reach into hidden parts of himself and reveal his shadow with the help of those two people. His shadow certainly lives across his Uranus at 16° Scorpio – in Taurus, where the conjunction of Demi’s Moon and Bruce’s Mars is. 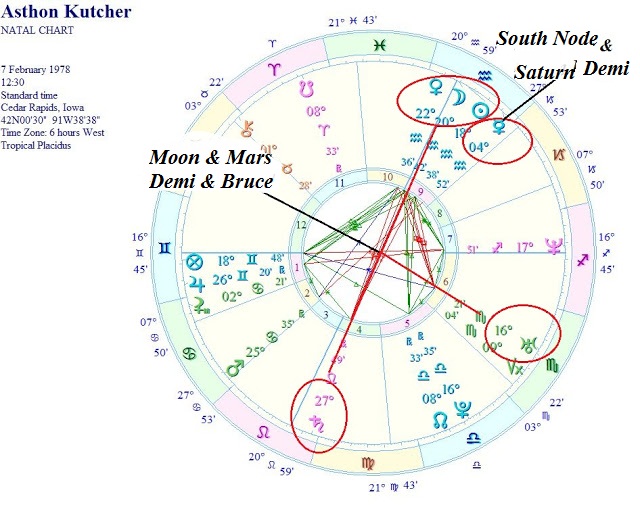 When Ashton Kutcher entered her life, Demi Moore started practicing kundalini yoga, that powerfully affects transformation of mind and helps to reach deep into our hidden parts, to become conscious being. Interestingly, since I found the degree for Kundalini Yoga (15°  Aquarius) -  right across her Mars as the top of her fixed T-square. More precisely, kundalini yoga is her SHADOW, and with her love relationships she managed to reach this discipline – both Bruce and Ashton were kind of bridge to kundalini yoga. 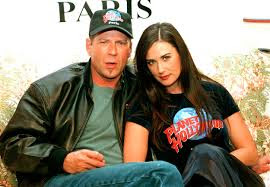 Since Agape is the deepest love, and since it is reflected in the strong conjunction of Bruce’s retrograde Saturn with Demi’s “lower conjunction” of Sun and retrograde Venus in Scorpio, it is a question whether those two people would ever terminate their story. In fact, it is terminated by divorce, but Saturn has a habit of returning to the old ways. Since they are friendly to each other, it is always possible to easily “glide” into relationship… It remains to be seen, especially when the recent new Moon at 19° Scorpio (November 11, 2015), whose Antiscia (the shadow, mirror) is at 10° Aquarius 59’ (very close to mentioned 9° Aquarius) certainly opened some possibilities. Here even the death (Scorpio) cannot change anything, for death is the new beginning…