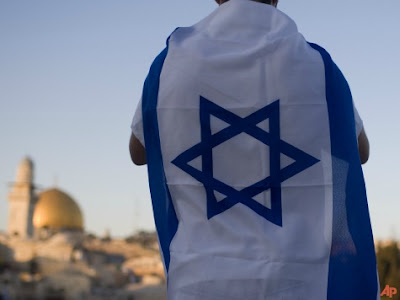 Although primarily connected to the sign of Cancer (because of Jupiter’s exaltation – fortune, religion, spirituality), Israel is sensitive to the Great Cardinal Cross across the 0º degree of cardinal signs inside the Zodiac, precisely 0º Capricorn in this Great Cross. The 0º degree of any cardinal sign is very sudden in nature. Here, things both start and end abruptly and suddenly. These places inside the Zodiac are specifically ‘hard’ due to the fact that the 0º degree of any cardinal sign is in a semisquare (45º aspect) with a so called “Avatar degree” (15º of fixed signs – Taurus, Leo, Scorpio and Aquarius). As a consequence, countries somehow connected to the 0º degree of cardinal signs are automatically related to the Avatar degrees, making their destinies somehow more difficult. Finally, 0º Capricorn is an image of the famous Wailing Wall (Saturn is the essential significator for a wall, since it rules the sign of Capricorn), and also the image of the suffering of the Jewish community during the World War II, in concentration camps (Moon – the people, is debilitated in Capricorn). 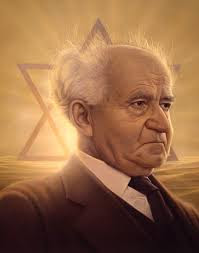 David Ben-Gurion, the man who dedicated his life to the founding of the Israeli state in Palestine, the first Prime Minister of Israel and the Minister of Defense, later named “the Father of the Nation”, was born in Płońsk, Poland (former territory of the Russian Empire). It’s often said that “names are destinies”, and there is a Star of David depicted on the Israeli flag. On the other hand, it’s interesting that “the Father of the Nation” comes from Poland, a country I mapped on one of the so called “Avatar degrees” inside the Zodiac in my research (you can read more about it in my article “Poland and 15ºAquarius”). The cups of 9th house in David’s chart (representing his purpose and the future life) on the cardinal 0º Libra, bringing him closer to Israel (0º Capricorn). A square is an aspect that “pulls” us in a certain direction. In the moment of the declaration of Israel’s independence (May 14th, 1948.), his progressed MC was exactly on 0º Capricorn! 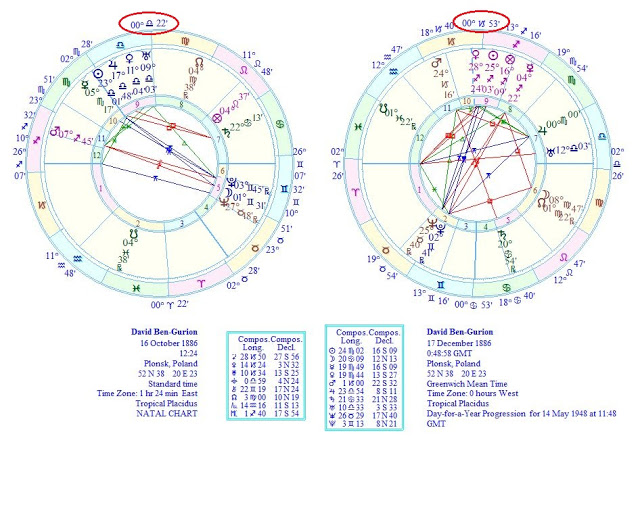 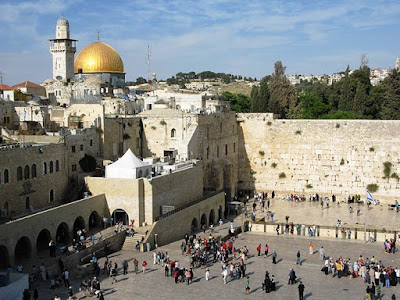 However, the establishment of the independent state of Israel and its existence has become the cause of frequent wars and conflicts with the Arabian countries, such as Syria, Lebanon, Jordan, Egypt, Iraq and Saudi Arabia. The warfare between Israel and Egypt ended with the signing of a peace agreement on March 26th, 1979, while the conflict between Israel and Jordan ended with the signing of a peace treaty on October 26th, 1994. Sporadic negotiations with Lebanon, Syria and other neighbor countries still haven’t shown any results. On the other hand, Israel is currently involved in a third conflict with Palestine on the territories under its control since the six day war in 1967., in spite of the Oslo agreement (mediated by the U.S. and Bill Clinton) on September 13th, 1993. and the efforts invested by Israel, Palestine and peacemakers of the world.


Now let’s take a look at Israel’s chart. We find the 3rd/9th house axis across 0º Capricorn/0º Cancer. The 3rd house describes neighbors, negotiations, while the 9th house speaks about foreign countries. So, even in the chart of Israel, we can spot the 0º degrees of cardinal signs! 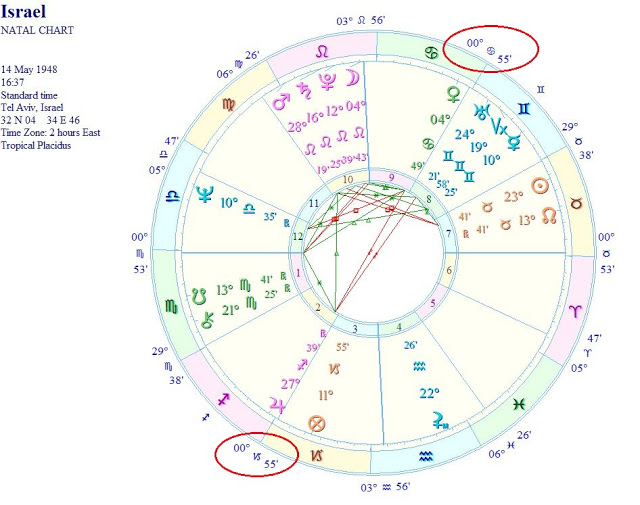 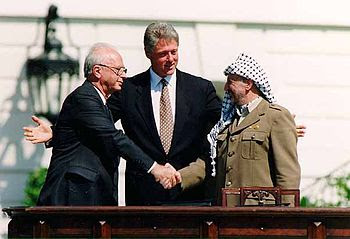 In the exact moment of the signing of this agreement, secondary Venus of Israel was on 0º Cancer, in retrograde motion. Venus is the ruler of Ascendant in Israel’s chart, and speaks about the state of things in the nation, the capital city, and it’s a general descriptor of diplomatic relationships. Retrograde motion is certainly the cause of the prolongation of the conflict despite the signed agreement. On the other hand, secondary Venus (diplomatic relations) of the U.S. was on 0º Aries, while the Solar Arc Moon of the U.S. was on 0º Libra! In the chart of the United States, the Moon is the ruler of the 9th house (foreign countries) and describes events outside the territory of this country. All this automatically fits in a Great Cardinal Cross across 0º, the Cardinal T-square on 0º Aries, Cancer and Libra which automatically activates the point across the focus point of this T-square – which is 0º Capricorn in this case, a degree I linked to Israel. 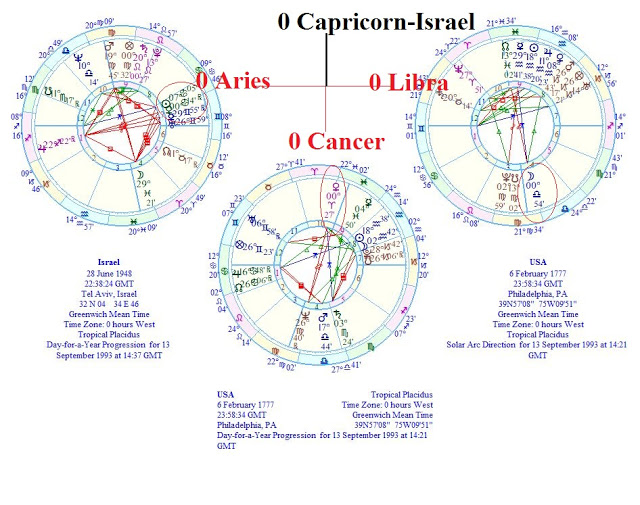 If we take a look at Palestine’s chart, we can spot the image of Israel in the symbolism of Saturn on 0º Capricorn, in the 4th house (territory). It’s also interesting to take a look at the Solar Arc directions of Palestine in the time of the Oslo agreement signing, in 1993. The chart angles make a Grand Cardinal Cross across the 0º degrees. 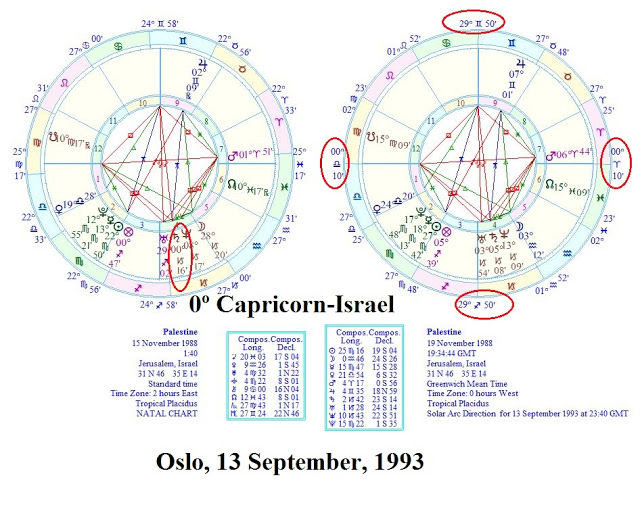 After World War I, Palestine became a British colony. In 1947. it was suggested that Palestine should be split into two independent countries – a Jewish one and an Arabian one. However, only the Jewish country of Israel was created, which annexed some territories that were supposed to belong to the Arabian (Palestinian) country. The parts of Palestine not included into the territory of Israel (the West Coast and the Gaza Belt) were then added to Jordan’s and Egypt’s territories. 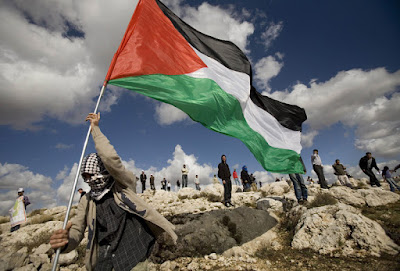 On November 29th, 2012. Palestine was upgraded to non-member observer state status in the United Nations.
If we search the ephemeris for eclipse dates, we can find three eclipse events that could have influenced these events:

The first was a solar one, which occurred after the six day war, on June 22nd, 1968. on 29º 30’ Virgo which is quite the trigger for the Great Cardinal Cross on 0º degrees. After this eclipse, in February of 1969., the Israeli Prime Minister Levi Eshkol, the successor of the Father of the Nation, David Ben-Gurion, suddenly died. Levi himself had an important role during the six day war.

The last, 29º degree of mutable signs (Gemini, Virgo, Sagittarius and Pisces) are definitely important, since they are the ‘gateway’ to the 0º degrees of cardinal signs.

The harmonic point on 4º Capricorn 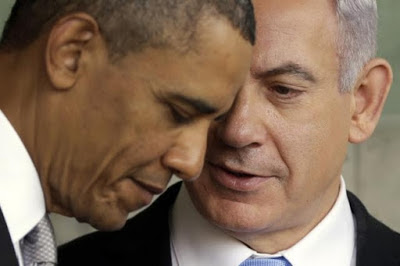 
The position of Venus in this chart is also interesting – exactly 0º of the cardinal sign of Libra.
Anyway, the fact that the current U.S. president Barrack Obama’s Solar Arc Sun will be on 4º Libra in that moment makes this very important, because it represents the involvement of the United States in the events between Israel and Palestine. This is also a representation of a conflict (square) between Obama and Netanyahu. The conflict seems unavoidable, since the White House warned the Israeli prime minister that it will stop giving support to its ally in the United Nations, also hinting at a change of course in politics when it comes to Near East.

The warning came after the Israeli prime minister declared that he won’t allow the Palestinians to create a country. Everything points to a possible beginning of a conflict between the U.S. and Israel in the autumn of 2015, the ‘gateway’ to this being previously opened by the eclipse on 29º Pisces in March... 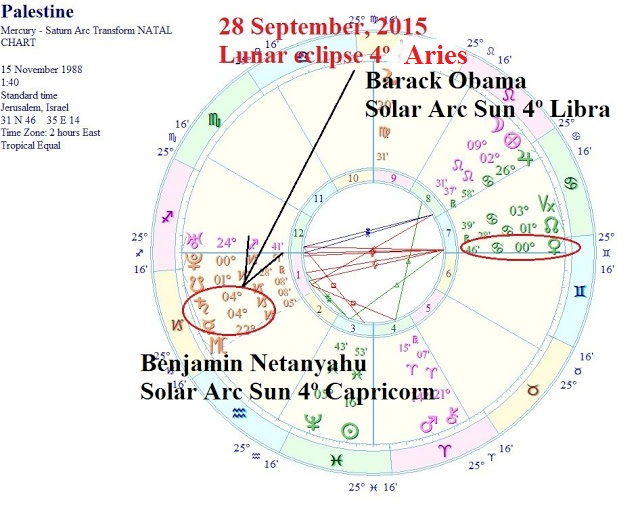 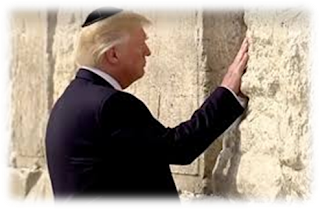 Donald Trump (the current US president) had visited Israel on 22 May 2017. Tertiary Moon of US was exactly at 0 º  Capricorn! In other hand, midpoint of Venus and Jupiter in US horoscope is at 4 º Cancer 26’, in opposition with 4 º Capricorn – the harmonic point which I’ve mentioned. In other hand, Trump’s Venus (ruler of his MC) in Solar Arc is during 2017 at 4 º Libra, squaring 4 º Capricron. There will be the Solar eclipse at 4 º Capricorn on 26th December, 2019. This may be very important for the relationship between Israel and US, because, than Trump will have in Solar Arc directions Saturn at 4 º Libra.

After all, in the horoscope of Israel we can see Venus (diplomacy, as ruler of 8th – conflicts) at 4º Cancer. Also, it is interesting that 8th house starts at 28 º Taurus 32’, very close with 29 º Taurus – ’anaretic’ degree and the place of The Pleiades, or „Seven Sisters“ (it’s well-known that they are crying in myth).

Trump is the only US president who had visited the famous Wailing Wall. Before him, Barack Obama had visited too, but in 2008, before he was elected. 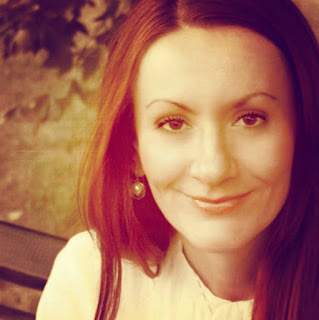 Smiljana Gavrančić is the editor, founder and owner of IAM-INFINITY Astrological Magazine. She obtained her astrological education at the Institute for Astrological Research and Education ―Johannes Kepler‖ in Belgrade, graduating in October 2010, after studying International Law at Belgrade University. She is an International Certified Professional Astrologer (ISAR C.A.P.) and a member of ISAR (International Society for Astrological Research) and of the Astrological Association of Great Britain. She specializes in mundane astrology and she practices karmic/hermetic astrology, astrology of degrees/archetypes (mythology, fixed stars) and synastry. She is writing her first book Special Degrees in Mundane Astrology. Her writings have appeared in  The Astrological Journal, and on The Mountain Astrologer blog and ISAR’s International Astrologer. Smiljana is a speaker at astrological conferences and workshops in Serbia and abroad (Brazil, Cambridge-UK, the Astrological Lodge od London, Athens (Greece) ). She blogs at www.astrologsmiljanagavrancic.blogspot.com    in English and in Serbian.

More about Smiljana you can read here - Biography