The biggest and the most populated country of Latin and South America, fifth largest in the world by territory and population size, seventh largest economy in the world – Brazil, is traditionally tied to the sign of Scorpio. It’s in this sign that two female principles, Moon and Venus, are weakened (Moon in fall, Venus in detriment). However, the single degree inside the Zodiac which could be important for this country is none other than the central (‘royal’) degree of Libra -  15º Libra, known as the beginning of the Via Combusta or Fiery Road, which is linked to the magical powers of the Egyptian goddess Isis. It seems that women have a more than significant role in this country, and the 15th degree points to the importance of this country as the biggest and most populated in this part of the world.

Coincidentally or not, I’ll begin this story with the legend about Amazon women. The last ‘discovery’ of the homeland of women-warriors, was reported in the world media in January 1976., when the famous Italian archeologist Guido Boldrini, the scientist who dedicated his life studying data about the existance of mythical Amazon women, called a conference and presented his latest discovery to the world:

“After long and hard research, we succeeded in finding a vast number of ceramic containers depicting the way of life of the legendary Amazon women warrior tribe. The diggings done on the territory of Brazil by my colleagues and myself witness that the tribe of women warriors truly existed.”

As the tales tell us, the Amazon women were tall, beautiful, built proportionally, but they dressed and behaved like men, wearing male clothes and tying their hair. Their mothers used to burn or cut their right breast with flaming iron at the earliest age in order to prevent growth and promote easier handling of weapons like bows. This part of the story made me realize the connection between the 15th degree of Libra – the beginning of the Fiery (Burning) Road.

In the whole history of Brazil, two women rulers had a very important role.  During the rule of princess Isabel, which brought to power the Law of abolition of slavery, came the idea to build the famous statue of Jesus Christ. Her natal Moon (the people) is very near the beginning of the Fiery Road – on 18º Libra.

In the more recent history of Brazil, it’s the current president (and the first female president), Dilma Rouseff.

The chart of Brazil

Let’s start by looking Brazil’s chart. It’s the exact moment when Brazil declared independence from Portugal, September 7th, 1822. Ruler of 10th house (Rulers, emperors, presidents) is Jupiter conjucted with Moon (woman).  As the conjunction is happening in the dual sign of Gemini, this can be an image of at least two women warriors. 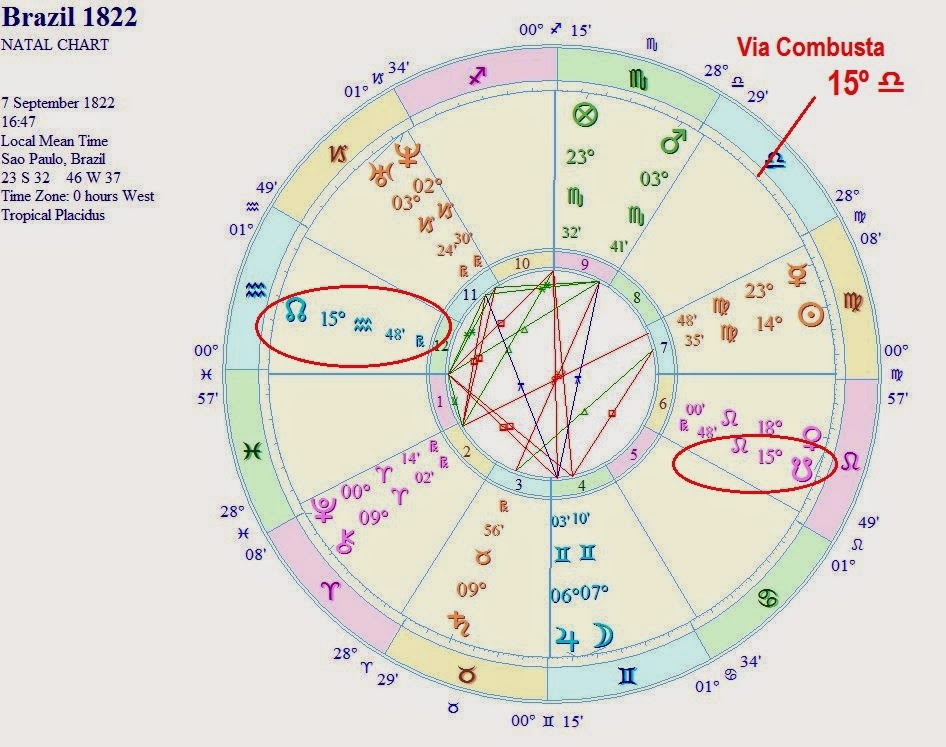 The nodes axis across 15º Aquarius - 15º Leo is very important, as it’s forming a trine-sextile with 15º Libra – the degree I found important to Brazil through my research. This is a perfect way of the past (South Node) and the future (North Node) to meet with ease.

The statue of Christ is a symbol of Christianity and a world known trademark of Brazil. As I said earlier, the idea of building this magnificent monument came from Princess Isabel in 1859. However, the statue was completed much later – October 12th, 1931. At that moment, progressed Venus (culture) of Princess Isabel was exactly on 15º Libra! Her natal cusp of 9th house (religion, future life, purpose) is also on that very same degree. 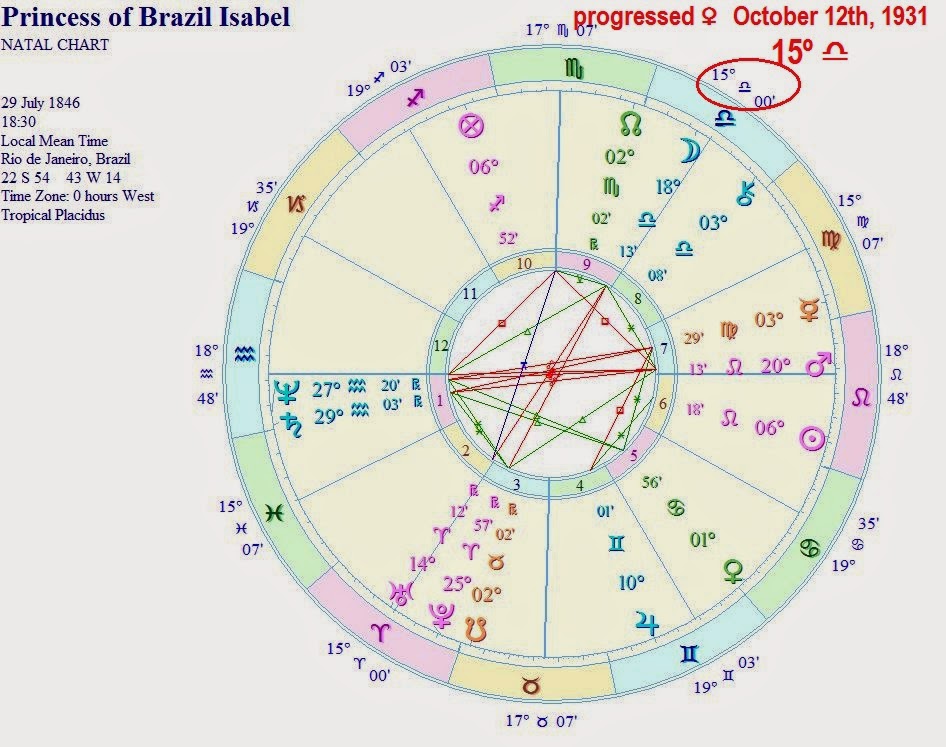 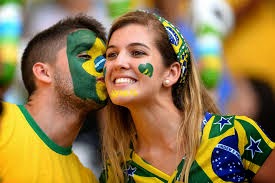 Even though the whole planet is busy watching the FIFA World Cup in Brazil, I won’t mention it in this article. I will say, though, that it’s the second time Brazil is hosting the cup, and holds the biggest number of titles – winning 5 times, fitting into the symbolic of the royal degree, 15º. Let’s look back to moment when Brazil hosted the World Cup for the first time, because that moment is the ‘seed’... The first time something happens is an important moment from which everything begins. 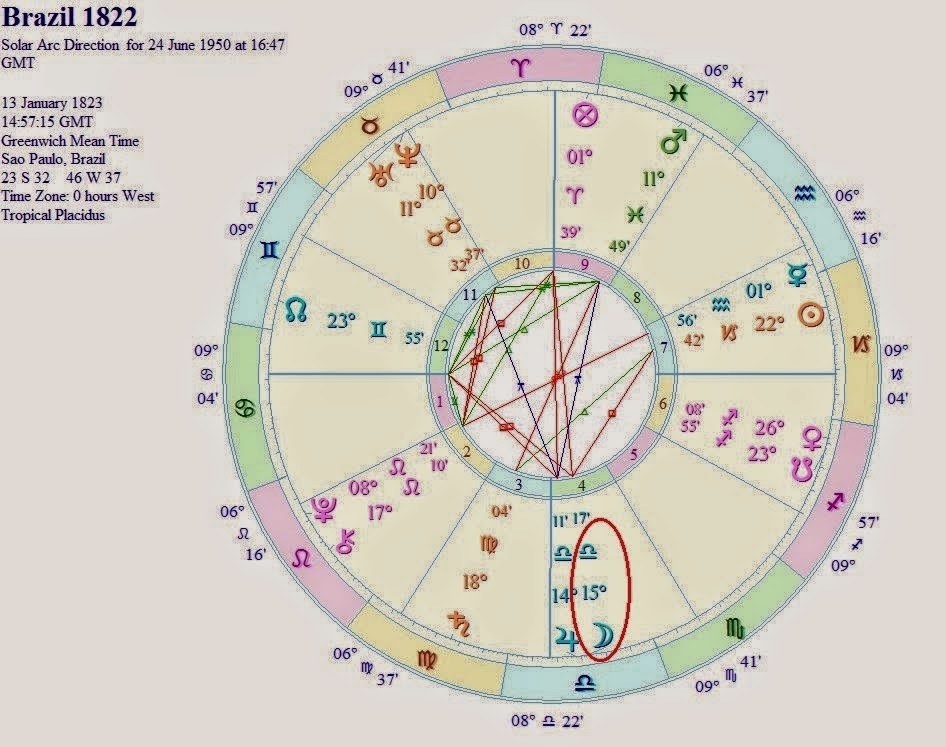 Another event important for this country happened on April 21st, 1960., when the capital was moved from Rio de Janeiro  to Brasilia. The angles of the chart (cusps of 1, 4, 7, 10) are the main triggers, and it’s interesting to look at the progressed cups of 4th house (territory) of Brazil’s chart... It’s positioned on 14º 54’ Libra, which is a close conjunction to 15º Libra, as progressed cusps move only one degree in a year. 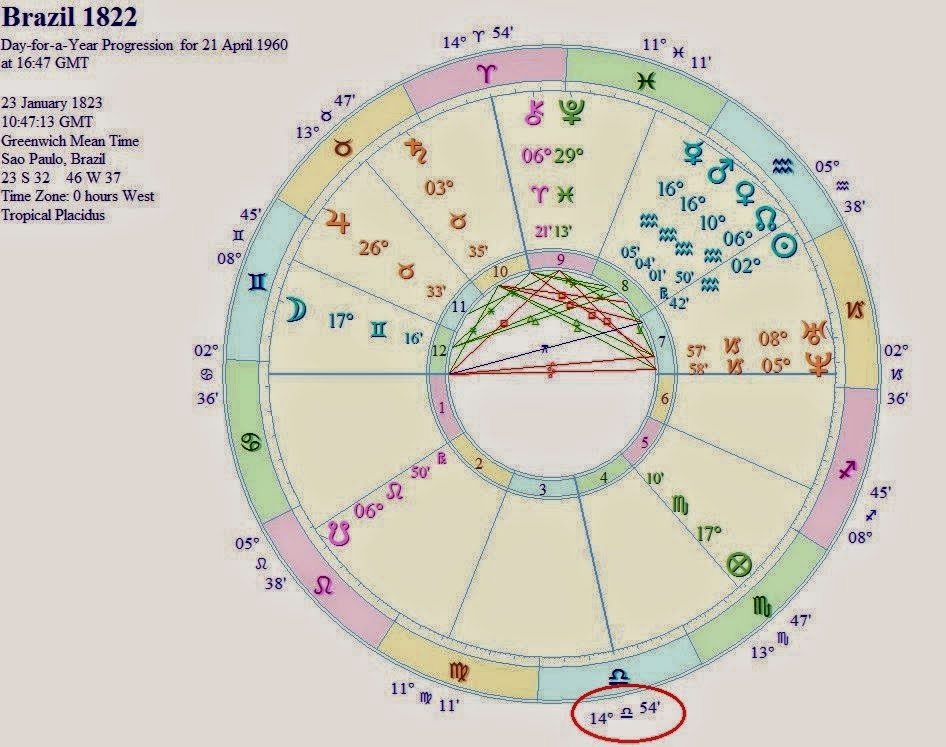 Since the independence gained in 1822., and the Brazilian empire, Brazil became a republic after a military coup in 1889. Military junta was managing the state from 1964. to 1985. The present Constitution of Brazil came to force on October 5th, 1988. and some astrologers take this date as the chart of Brazil. If we look at directions of Brazil’s chart in 1822., we can see that the directive cups of 3rd house (regulations, norms) was on 15º Libra! 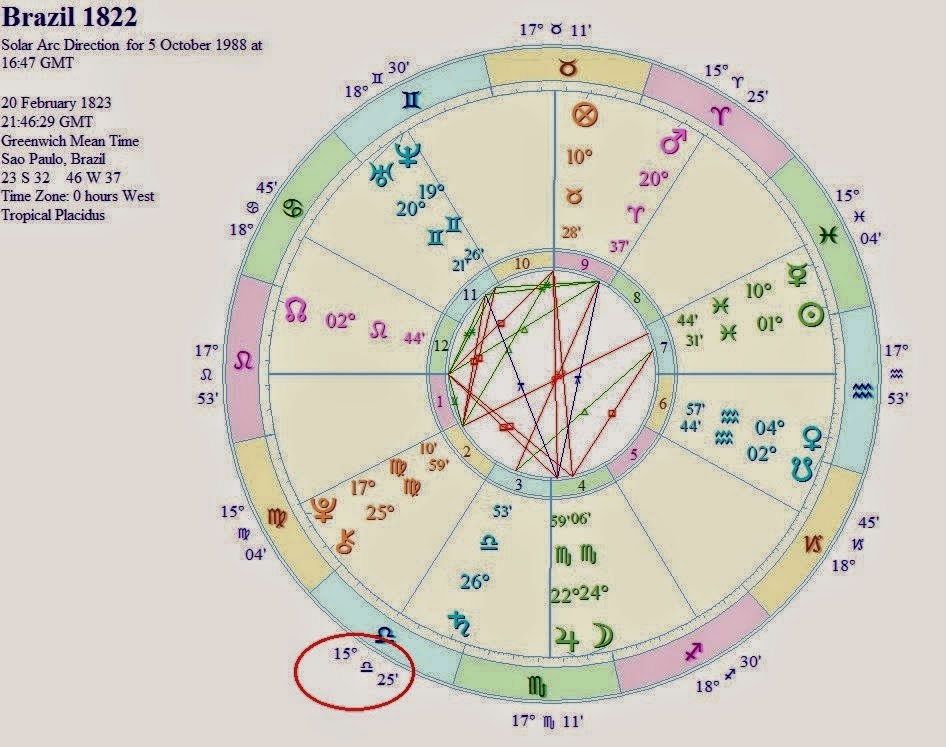 Finally, it’s easy to see the connection between the magnificent carnivals in Brazil and 15º Libra. 15º is a sign ruled by Venus (beauty, enjoyment, dance...) and the 15th degree indicates an important event. 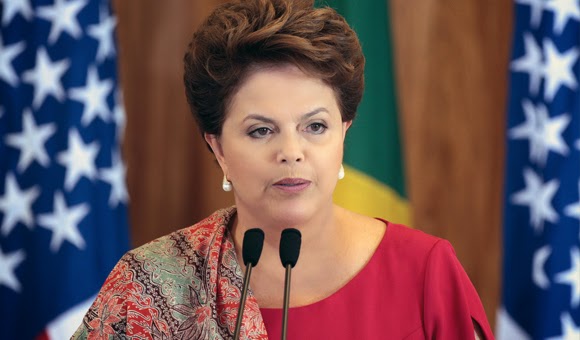 Last, but not the least, let’s focus a little on the last Uranus – Pluto square happening on March 17th, 2015. on 15º Aries - 15º Capricorn. If 15º Libra is truly an important degree to Brazil, then the square I mentioned will surely influence it in a way. The position of directive Neptune – ruler of Ascendant in Pisces (The capital) on 15º Cancer, and the tertiary cusps of Princess Isabel’s chart are especially interesting (all of them on the 15th degree of cardinal signs). 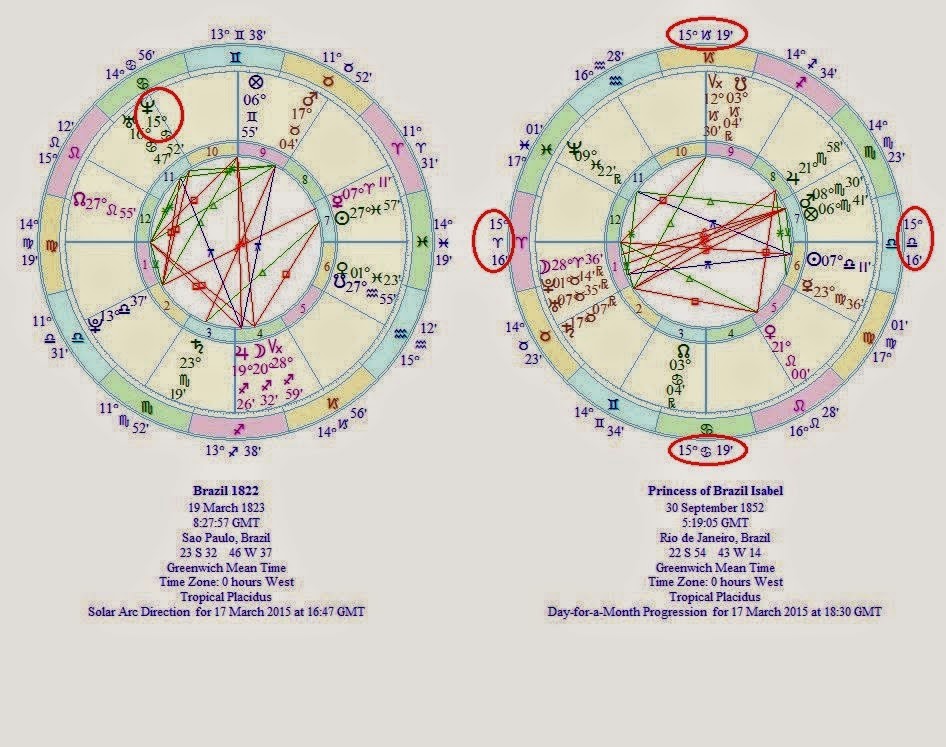 The incoming lunar eclipse in October 2012. on 15º Aries can be an introduction to the Uranus – Pluto square in 2015. As Neptune is positioned in the 11th house (parliament) in Brazil’s chart, we can anticipate some changes in Brazil’s parliament, due to the fact that the presidential elections are happening in October in Brazil, with the new president’s mandate beginning on January 1st, 2015. It remains to be seen how the biggest and the most populated country in South America will be influenced by this challenging period, and if this country will still be lead by a woman... 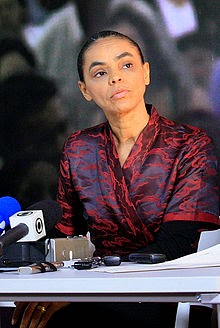 In April 2014, Eduardo Campos announced his candidacy for the Brazilian Presidential election, naming Marina Silva as vice presidential candidate. After Campos's death in a plane crash on August 13th, she was selected to run as the Socialist Party candidate for the presidency of Brazil in the  October 2014 elections.

It is interesting that Marina Silva has in her natal chart  the Moon (the people, Brazilian nation) at 15º Libra, a degree so special for Brazil. 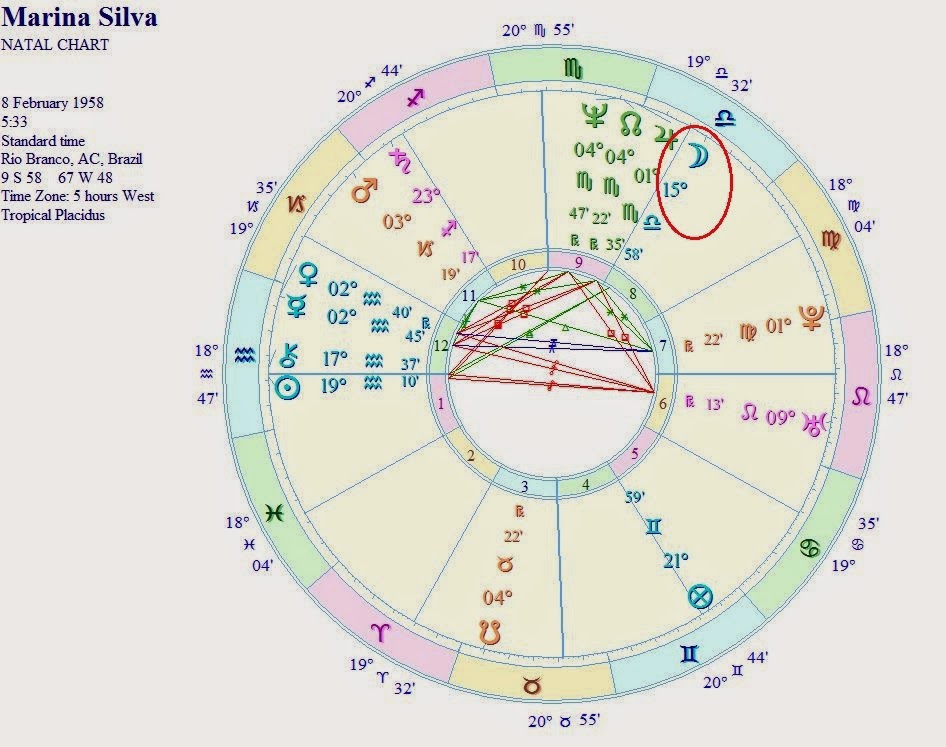 Election Day in Brazil is October 5th, 2014. If we look in the directions of Marina Silva, we find out that she has directiv axis Asc-Desc (moving one degree in one year)  at 15º Aries/15º Libra, and progressed Sun (president) at 15º Aries, in oposition with 15º Libra (degree important for Brazil). Is this a sign that Marina Silva will have  difficulties to win? If I say again, that during these days, around elections, there will be Lunar eclipse at 15º Aries (October 8th, 2014) we can make conslusion that Marina Silva is called by the Universe. As Brazil is conected with 15º Libra, and as if front of us is 7th Uranus-Pluto square at 15º Aries-15º Capricorn, this time woman maybe could have difficulties to win... Marina is so important for Brazil, as Dilma, too, but this time it might be difficult for a woman to be the ruler... It remains to bee seen... 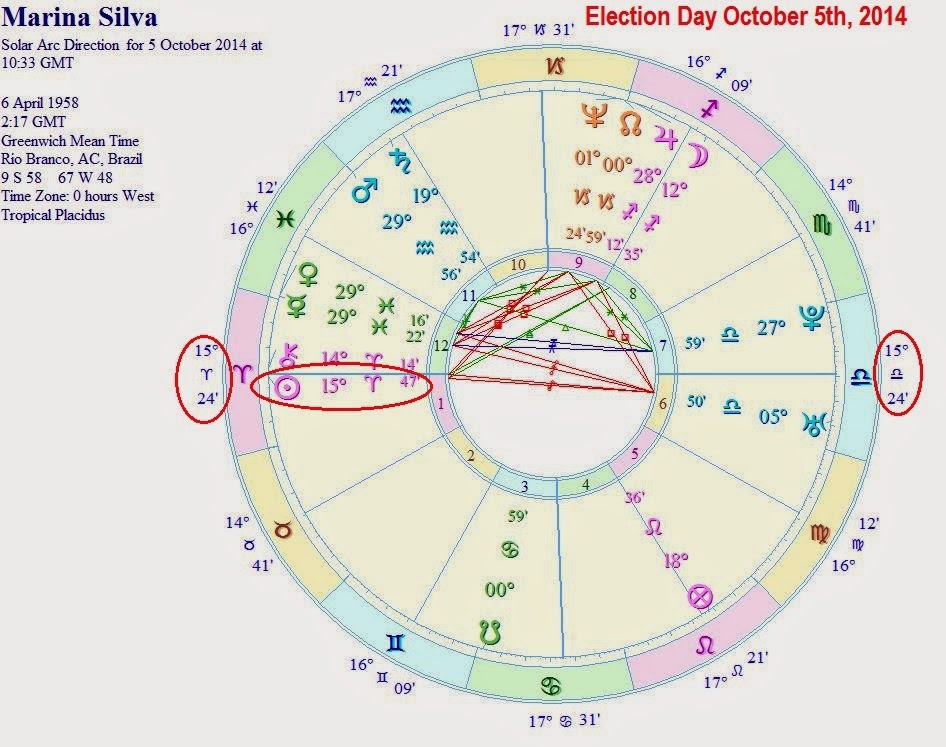