This article is going to be my editor's letter in the upcoming summer issue of Infinity Astrological Magazine (IAM) - www.infinityastrologicalmagazine.com 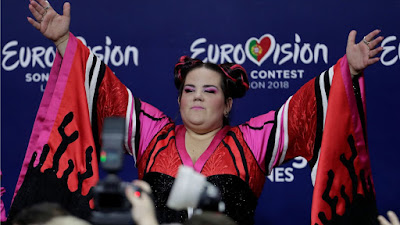 In Japanese kimono and with hair styled like geisha, 25-year singer Netta Barzilai won 63th Eurovision Song Contest on May 12, 2018 (in Lisbon, Portugal) with the song „Toy” and brought Israel its fourth win.
The Venus (music, art) was out-of-bounds and in Gemini, while Uranus was crossing 29° Aries and getting ready to touch (on May 15, 2018) 0° Taurus. While I was watching the final competition of Eurovision, I thought of Israel’s horoscope because this country has Asc/Desc axis across 29° Libra/29° Aries and out-of-bounds Venus. Out-of-bounds Venus means that all that is in the symbolism of the Venus in Israel may be somehow more talented, special, but also very daring, different and „crazy”. The ruler of Venus in Cancer is the Moon in Leo that is also out-of-bounds, so Israel people are very talented in the sense of culture. Unusual Netta and her song „Toy” fits into all this perfectly. It has to be mentioned that progressed Sun of Israel is at 0° Leo during 2018, activating the transition from 29° cardinal signs towards 0° of fixed signs. Netta was born on January 22, 1993 in Hod HaSharon (time of birth unknown). If we take a look at her chart for noon, there is the Moon at 28° Capricorn, very close to 29° Capricorn, activating Grand Cardinal Cross at 29°.

Each 29° is “exotic”, carrying a lot of wisdom, representing the synthesis of all previous degrees of a sign, the huge knowledge… 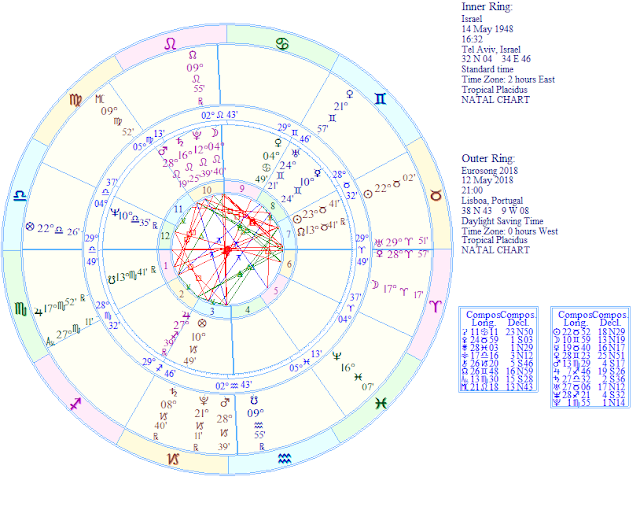 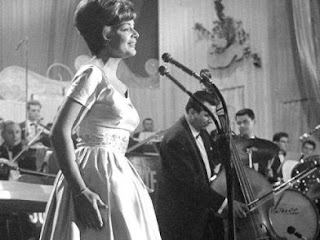 But, since everything has its source, i.e. the beginning, I compared the chart for the moment of the first Eurovision. It happened in 1956 in Switzerland (on May 24). Then, Uranus was at the end of Cancer, at 29° Cancer, just like at the moment of the 63th Eurovision it was at the end of Aries, at 29° Aries. That chart may be progressed through time and important information about this competition may be obtained. The Saturn (boundaries) is interesting at the end of one sign, at 29° Scorpio (calling out 29° Aries by quincunx). However, what is more important is that on May 24, 1956 the Venus was out-of-bounds and marked in the start that advantage was given to those countries with the Venus out-of-bounds! 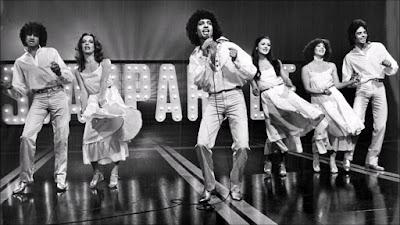 For the first time Israel won Eurovision Song Contest on April 22, 1978 in Paris (France) with the song „A-Ba-Ni-Bi” (the Hebrew for „I Love You”), represented by Izhar Cohen and the Alphabeta. Solar Arc Venus (music) in the chart of the First Eurovision from 1956 – came to 29° Cancer, i.e. it was in conjunction with Uranus from the chart of the First Eurovision. Interestingly, transit Moon was crossing Israel’s Ascendant (29° Libra). 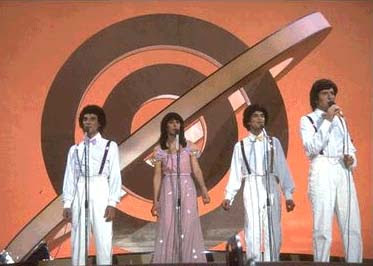 The second win of Israel happened the following year, on March 31, 1979 (Israel was the host of the competition). The winning song was „Hallelujah”, performed by Gali Atari and Milk & Honey. I find it interesting that transit Jupiter was at 29° Cancer, activating again the Uranus from the chart of the First Eurovision from 1956. But, this time the Moon was at Algol and it activated Israel’s Ascendant by quincunx. 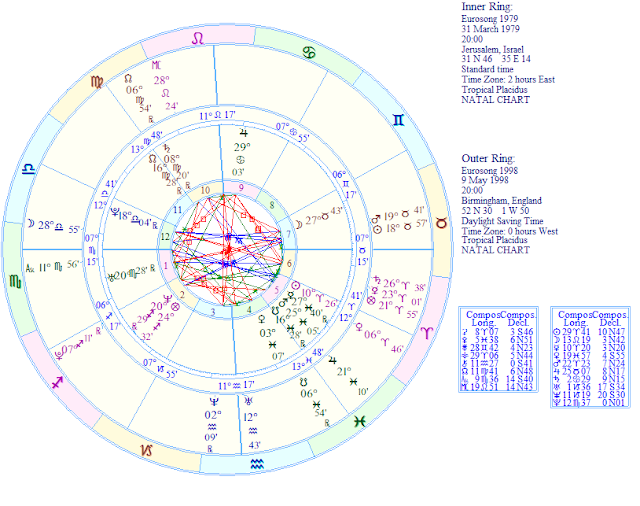 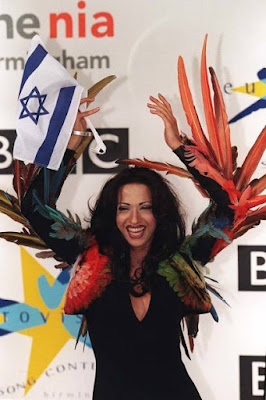 Israel won for the third time on May 9, 1998. The competition was held in Birmingham (United Kingdom), the winning song was „Diva” and the performer was Dana International. Transit Moon was crossing Israel’s Ascendant again (29° Libra).

It seems that the Grand Cardinal Cross across 29° represents the „The Song of Songs”. Or, the transition from 29° of cardinal signs towards 0° of fixed signs is the spot within Zodiac where „The Song of Songs” lives, the song of yearning, the song celebrating the love of man and woman, the song that inspired the title of this last free issue of Infinity Astrological Magazine (IAM). From September 2018 you will be able to hold IAM in your hands, since we will start with printing. This fits the best into 0° Taurus, for among fixed signs Taurus is the one that makes things tangible, that materializes, creates… Finally, IAM has Mercury at 0° Aquarius, so Uranus at 0° Taurus is „awakening” and „shouting” – „come on, it is time, some hands there (Mercury) want to touch you...".

Beginnings of fixed signs – 0° Taurus, 0° Leo, 0° Scorpio, 0° Aquarius – are beginnings of something that has been awaited for a long time, for fixed signs are the slowest. 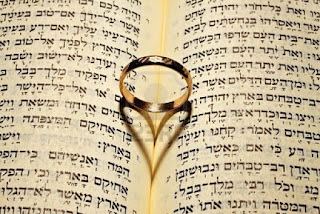 „The Song Of Songs” was kept in Hebrew Bible and Old Testament and it belongs to Scriptures. It used to be read during Passover (Jewish holiday celebrating their liberation from slavery in Egypt). I must add that Egypt’s Asc/Desc axis is at 29° Aries/29° Libra!

In Christianity, „The Song Of Songs” represents the connection and mystic wedding of Jesus Christ and the Church.

In Hebrew culture, „The Song Of Songs” tells of love or pledge between the God and people of Israel, where Israel is represented as the divine bride. There is also an interpretation that this song is the symbol of ideal love of the King Solomon with Wisdom. 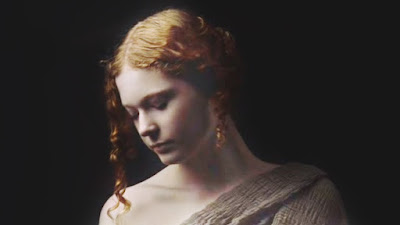 From 29° Cancer one touches 0° Leo, the “fire”, the door of one’s own creation are opening, the door of „hot love”, here the Sun finally shines. Be cautious not to let the ego blur your Mind, for sometimes we cannot see because of the bright Sun… Here, some inner convictions should be changed, for this is the spot of our Third Eye. But, one is still afraid of the change/freedom (Uranus is in exile in Leo), and impatient at the same time (Saturn is in exile in Leo). Finally, there is the problem with personal faith here, for Neptune “falls” in Leo, so Great Britain lives at 21° Leo (the degree of Neptune’s fall), the country that renounced its faith and chose Protestantism.

From 29° Libra one touches 0° Scorpio, the region of Via Combusta (the burning way) and the place where enormous energy lives, the enormous fortune, but also all those loves we call „fatal”, loves that last until death and beyond, for finally, the death does not exist. Here one needs to be emotionally strong for here both Venus and Moon are in weakened dignity, but here one is also the craziest, the most courageous (Uranus is exalted in Scorpio), like Phoenix, being born again (Pluto is exalted in Scorpio).

From 29° Capricorn one touches 0° Aquarius and finally ascend to the Skies, leaving the Saturn’s sphere and losing the ego (Sun is in exile in Aquarius). Here one is Uranus – “awakened man”, but only if one is not the part of what the society (the state) stipulates – if one is not the part of the system, of the „cozy safety”. Uranus is strong here, in domicile, and one has his/her own opinion here, he/she is independent, not part of any structures, alone but free. Finally, here the Neptune is exalted (21° Aquarius), and the personal faith is very strong.

In the end, „The Song of Solomon” („The Song of Songs”) was the central theme during the wedding of the Prince Harry and Meghan Markle on May 19, 2018. Do I need to remind you that Uranus was at 0° Taurus, the Sun at Algol, the Moon crossed 29° Cancer later that day…

You can listen to „The Song of Songs” by Divna Ljubojević here.