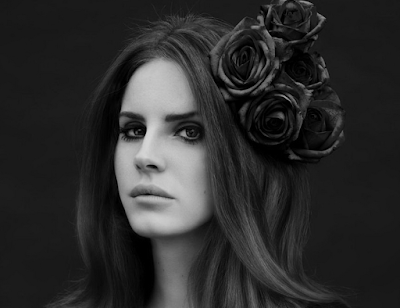 We are still in the period of retrograde Venus that might bring into focus a girl who, by her appearance, image, voice, music – reminds us of the passed times... Gates of the 65th Cannes Festival are still open, and these days a popular American singer Lana Del Rey visited Cannes as a guest. Since Lana has her Ascendant at 13º Leo, as Marilyn Monroe had, who is the face of this year’s Festival (see my previous article “Marilyn Monroe, Cannes andretrograde Venus”), and the North Node at 28º Aries, where the Venus (beauty) of Marilyn Monroe is, then it is no wonder that Hollywood producers already have a plan for this young American, and they see a new movie icon in her! Namely, they “flooded” her with film offers, and all that in Cannes. Lana Del Rey is a songwriter, and her scene name is the combination of names of the late Hollywood actress Lana Turner and Ford’s car Del Rey. The name best describes her style – old Hollywood glamour (symbolism of retrograde Venus).

In her chart, Lana has Venus at 6º Leo, in 12th house (symbolism of being retrograde, but also the house of the personal myth), in a square with retrograde (previous life) Pluto (Hades) at 4º Scorpio, which is almost the degree of its exaltation (3º Scorpio), and in the 4th house (love from the previous life, as the 5th house from the 12th), so this is depiction of Persephone in her chart, as her strong inner need, for it is all about some love from before, from previous life! Since her Venus, being the ruler of 3rd house (songs she writes), goes through its dispositor – the Sun, to 29º (degree also related to being retrograde, to “secret”, magic) Gemini (words) into 11th house (liberation), and into trine with Pluto, we see that Lana is a very modern, “awaken” Persephone, that she radiates freedom, courage, passion, depth, but she also kept her mystique, i.e. sorceress (29º) within, which is the task of the real Venus… 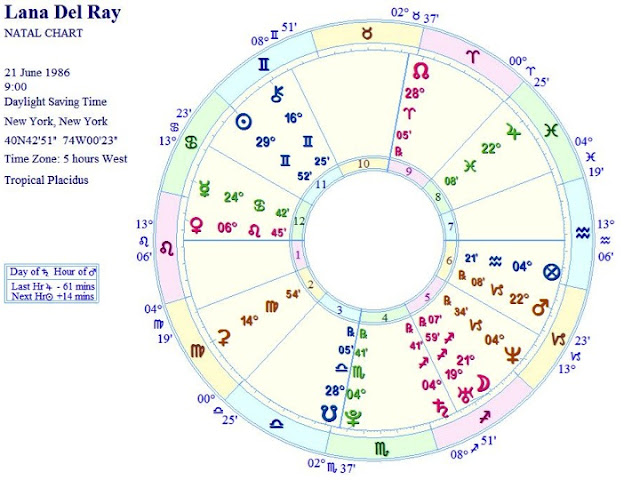 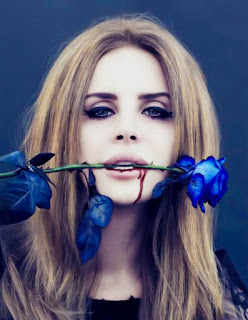 Her music, her songs are just like that – deep, passionate, emotional… In her song “Born To Die”, from the same album, Lana sings of being “sleeping”, “blind”, scared as a little child, but now she “sees” it all… Now, she became brave and she asks her feet not to fail her and to lead her to the goal, to him… She became so brave that she calls for him to come to the “wild side” of life, to let her kiss him hard in the “pouring” rain, because, as she says, he likes his girls “insane”… She admits to him that she is lonely every Friday night… She invites him to keep making her laugh and to fly high together...

Feet don’t fail me now
Take me to the finish line
All my heart, it breaks every step that I take
But I’m hoping the gates,
They’ll tell me that you’re mine
Walking through the city streets
Is it by mistake or design?
I feel so alone every Friday night
Can you make it feel like home, if I tell you you’re mine
Don’t make me sad, don’t make mi cry
Sometimes love is not enough and the road gets tough
I don’t know why
Keep making me laugh,
Let’s go get high
The road is long, we carry on
Try to have fun in the meantime
Come and take a walk on the wild side
Let me kiss you hard in the pouring rain
You like yours girls insane
Choose your last words
This is the last time
Cause you and I, we were born to die
Lost but now I am found
I can see but once I was blind
I was so confused as a little child
Tried to take what I could get
Scared that I never find
All the answers, honey

Furthermore, this girl calls herself a gangster Nancy Sinatra (the daughter of the famous Frank Sinatra, famous American actress and singer), which is also the strong reminder of the world of Pluto, but also to the retrograde Venus (someone from before). Tattoos are what she makes her body “beautiful” with. What makes Lana stand out, like the real Persephone, are also plastic surgeries that she had as a very young. Persephone is afraid of growing old, and in the first wrinkles and gray hair she sees a kind of danger, so she easily reaches out to corrections by plastic surgery.

Album “Born to Die” has 15 songs in total, and it was released on January 30 of this year, 2012, and managed to bring a great popularity to this young American. On January 30, Fortuna was at 15º Gemini, and on that very same spot on June 6, 2012, there will be a transit of Venus across the Sun disc, the meeting of two lovers, which announced the possibility for Lana to achieve the success, happiness (Fortuna) through this album. We know that the Soul seeks the permanent feeling of ease, and that the Fortuna point is the place of our karmic award, and its position within the sign, house, and its aspects and relation to its ruler it speaks most directly of the state of this inner ease we posses, which is our ticket for different states of consciousness, and by that, for the different levels of the fate. 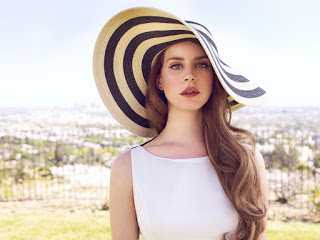 Since the dispositor of Fortuna at 15º Gemini is Lana’s Mercury at 24º Cancer, in 12th house (her personal myth), then this degree is something to pay attention to, since it is analogue to the sign of Pisces, series 12, being retrograde, Venus that is exalted in Pisces. Why? Because on the day when the same name song from the album “Born to Die” was released for the first time on Youtube (December 1, 2011), Fortuna was at 24º Pisces! If we add that Lana’s secondary Sun for this year is at 24º Cancer, and the Sun represents her, since her Ascendant is in Leo,  and that on January 30, the day her album “Born to Die” was released, her secondary Moon, the ruler of her 12th house (her personal myth, her inner need) was at 24º Scorpio, it becomes clear that there is great water trine across 24º Cancer, Scorpio and Pisces, which certainly implies talent and possibility of success, and all that in the year of the retrograde Venus! At the end, the Venus started her retrograde motion this year at exactly 24º, didn’t it?!

When the Moon and the Sun make harmonic aspect in progressions, we might suspect that to be depiction of the new personal beginning for the person. In her chart, Lana has the Sun (herself) and the Moon (ruler of 12 – her myth, the inner need) in opposition, and she surely has the problem in realizing her inner needs. But, since in 2012 her secondary Sun comes to her natal Mercury in 12 (personal myth), and her secondary Moon makes exact trine with secondary Sun within the month of the date her album “Born to Die” was released, Lana had the opportunity to have new personal beginning early in 2012, and to do it with ease (the trine)! But, the very 24º make us conclude that in doing so she had to be somehow silent, secretive… 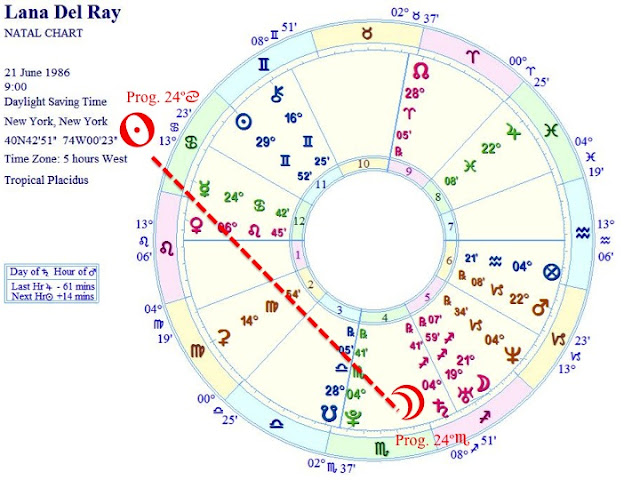 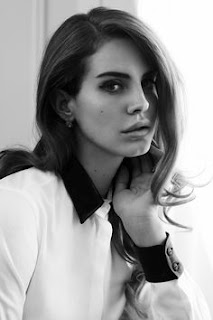 We must realize that Lana Del Rey’s Moon is placed in 5th house (love), that it “crossed over” Uranus (divorce) and that it opposes the Sun (herself), in 11th house, at 29º (secret) Gemini, which is depiction of herself in some secret, “free” relationship with a man who is divorced. Since the album “Born to Die” was released on the day when Fortuna was at 15º Gemini (star Rigel – man who has several marriages, problems with women), where two lovers will meet on June 6, 2012, as I have already mentioned, and what “activated”, through disposition, Lana’s Mercury at 24º (secret) Cancer (emotions, closeness) in 12 (secret, personal myth) with which secondary Moon (in natal chart in 5th house – love) at 24º (secret) Scorpio (passion, deep emotions) made the exact trine on January 30, 2012, then we may suspect that the album “Born To Die“ brought this young girl not only popularity, but also love, and this time with ease (trine), that might be “secret” (24º)?! These days, American tabloids speak about Axl Rose, the front man of the band Guns ’n’ Roses, being in a “secret” relationship with the twice younger colleague, Lana Del Rey... Axl Rose was married to the famous model Stephanie Seymour, by which he is known for in the public. His body is decorated with tattoos, so depiction of Hades fits here as well…

Anyhow, album “Born To Die”, and especially the same name song brought Lana Del Rey the possibility of fulfilling her inner need, her personal myth, because by activating this special symbolism through the song, Lana comes to her Mr. Pluto, to her “secret” love…